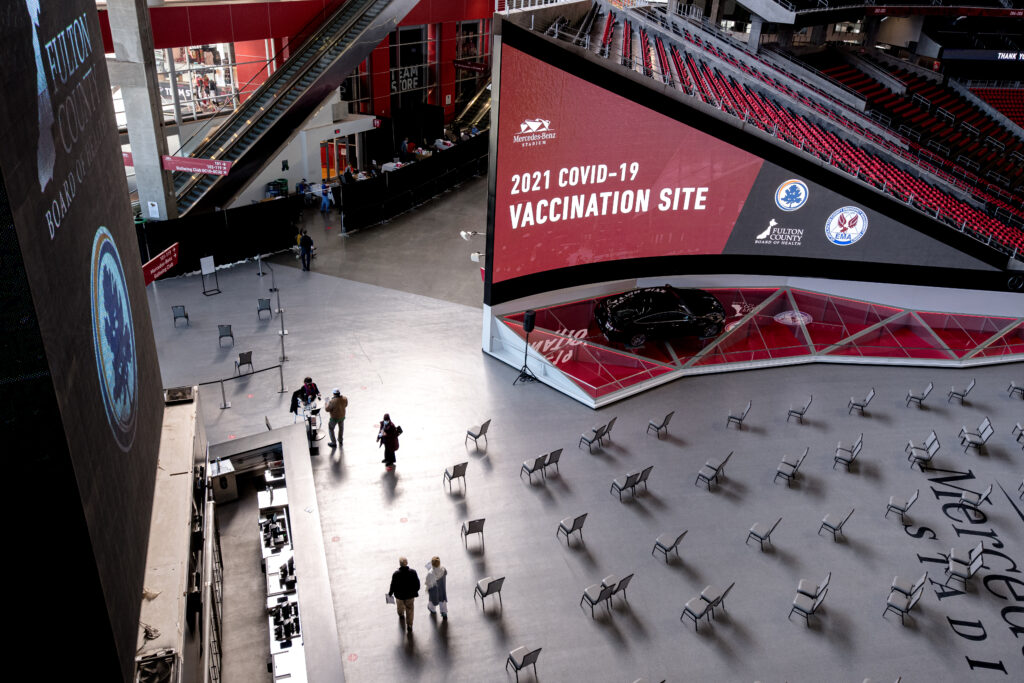 The Atlanta vaccine site inside the stadium is expected open in the next two weeks and should be able to administer about 6,000 shots a day, or 42,000 per week, according to a news release from President Joe Biden’s administration.

It will be open for eight weeks, marking a test run for mass vaccine sites overseen by the Federal Emergency Management Agency (FEMA) in vulnerable communities hit hard by the pandemic.

Officials from FEMA, the state Department of Public Health, state emergency-management staff and Fulton County planned to meet Friday to shore up details on running the site, according to the White House.

“Governor Kemp is proud to partner with the federal government, Fulton County, and private partners to vaccinate more Georgians at the Mercedes-Benz Stadium,” said Mallory Blount, Kemp’s press secretary. “By working together at a federal, state, and local level, we can save lives and get Georgians back to normal.”

Four other mass vaccine sites have already opened in metro Atlanta, Macon, Albany and Habersham County. Another five sites are scheduled to open later this month in Savannah, Columbus, Waycross and Bartow and Washington counties.

Combined, those nine state-run vaccine sites should have the ability to give around 42,000 shots a week to eligible Georgians, with capacity to ramp up once the federal government approves the state for larger shipments of the vaccine.

Georgia’s weekly vaccine supplies are set to stand at 223,000 doses starting next week of the Pfizer, Moderna and Johnson & Johnson vaccines.

Roughly 2,217,000 vaccines have been administered in Georgia so far, with nearly 867,000 of those shots being second doses to provide full inoculation, according to state data.

Nearly 824,000 people had tested positive for COVID-19 in Georgia as of Thursday afternoon, with more than 192,000 more reported positive antigen tests indicating likely positive results. The virus has killed 15,462 Georgians.

How will this year's army of Brood X cicadas affect NC? Here are tips and ... recipes