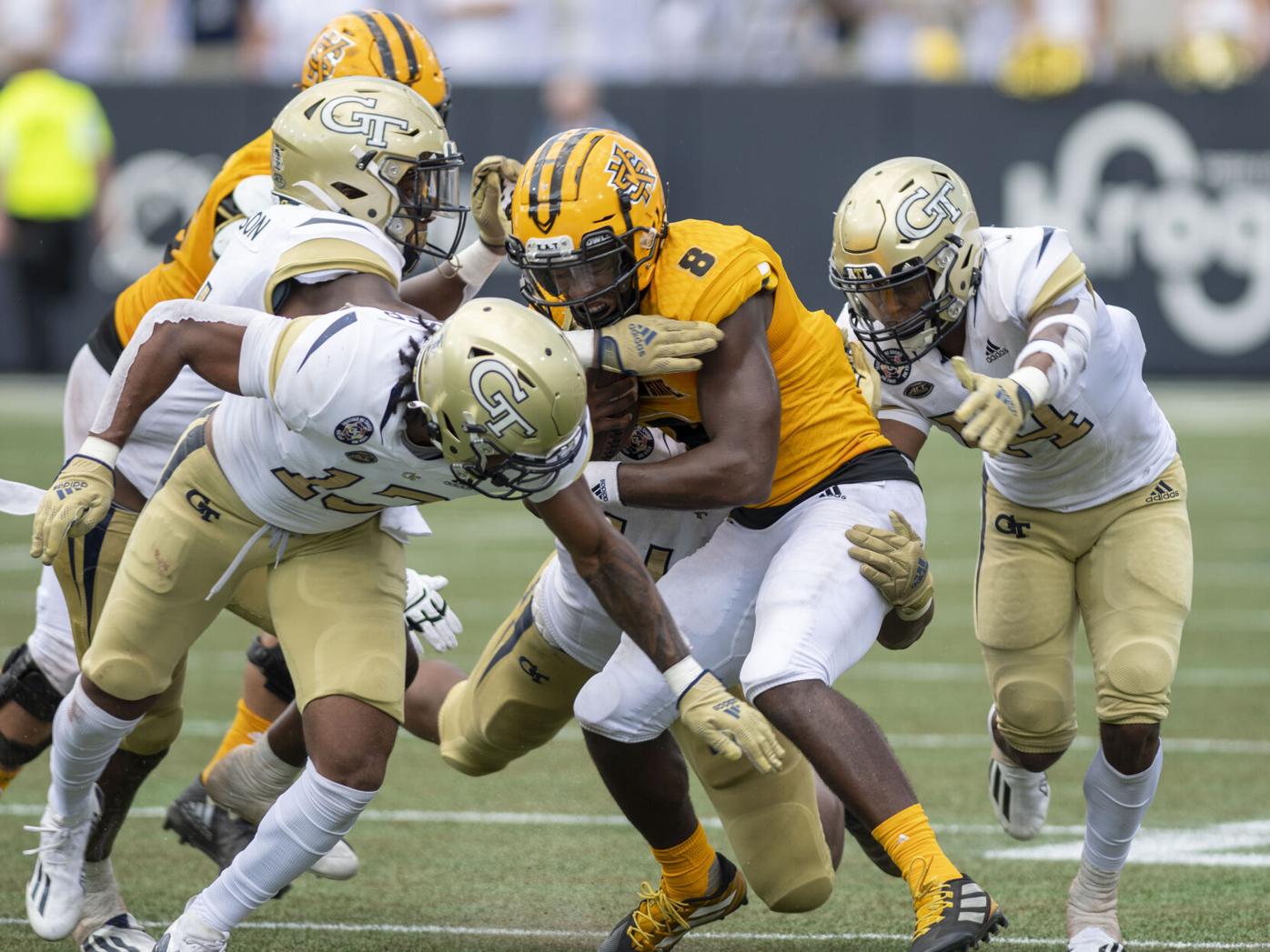 Kennesaw State quarterback Xavier Shepherd gets stopped by a group of Georgia Tech defenders. Injury issues along the Owls’ offensive line were among the problems the program is looking to improve upon heading into Saturday’s game at Wofford. 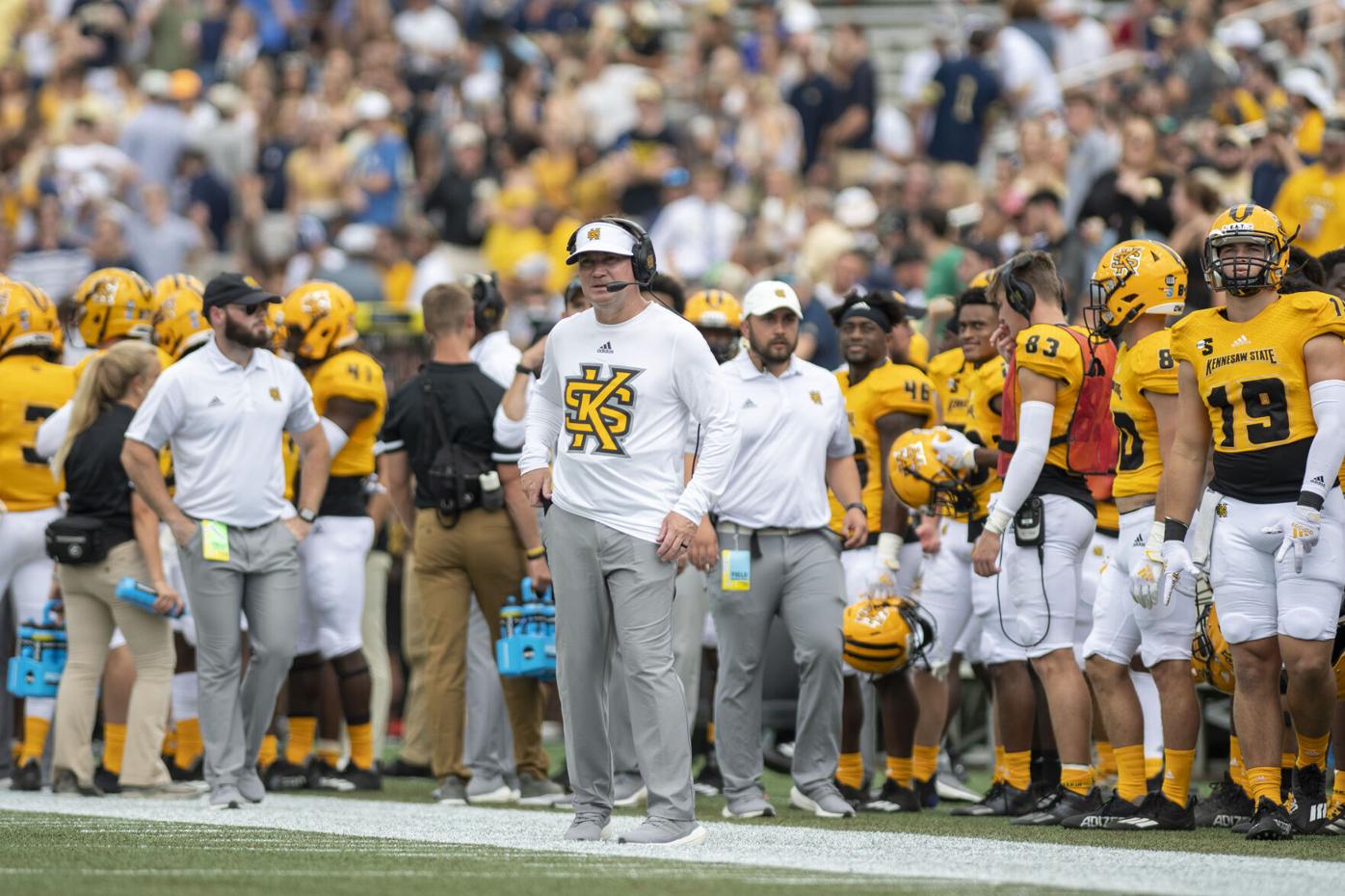 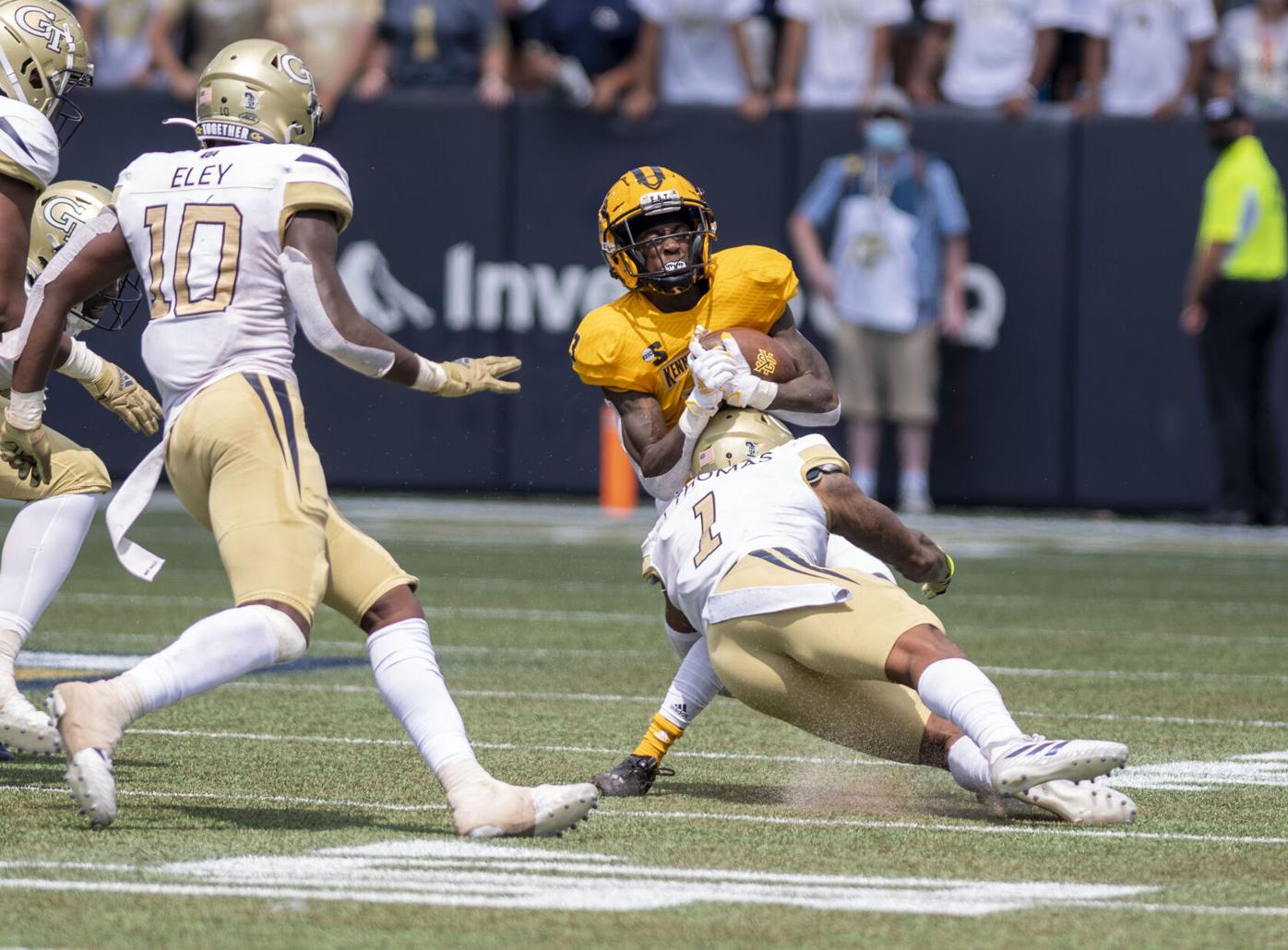 Kennesaw State quarterback Xavier Shepherd gets stopped by a group of Georgia Tech defenders. Injury issues along the Owls’ offensive line were among the problems the program is looking to improve upon heading into Saturday’s game at Wofford.

“We are not playing to our standard right now,” Bohannon said. “I don’t care who we play, but can we go play to the best of our ability? We have too many missed assignments, and we’re not playing with the kind of effort that is the standard of our program.”

On offense, when a back did not go in motion, the pitch by quarterback Xavier Shepherd hits the ground. The Owls recovered, but instead of a first down to keep a potential scoring drive alive, it resulted in a 12-yard loss and a punt.

On defense, a missed assignment allowed Georgia Tech running back Jahmyr Gibbs to get around the corner untouched and pick up 26 yards on the Yellow Jackets’ first play from scrimmage. Later in the drive, on third-and-8, Kennesaw State did not cover the middle of the field, and it resulted in a 30-yard completion to the edge of the red zone.

“These are all self-inflicted wounds,” Bohannon said. “We have to do a better job on our end, first of all. The kids have to go do their job, and if we do those things, maybe the beginning of the game is different. Maybe it starts out different, maybe it takes on a different path. You don’t know because it didn’t happen, but that’s the first drive on either side of the ball.”

Regardless, the message was conveyed as to what is expected heading into Kennesaw State’s next game Saturday at Wofford. Bohannon said players will be made to reach for the Owls’ standard in practice, which he then hopes will translate onto the field.

“The focus right now is us and practice,” Bohannon said. “As coaches, we have to get things to a point that are clear and concise, where we can go do the things necessary to go play at a high level. That’s what I told them after the game, and in a little tougher manner (Monday). ‘Control the controllables. We can block the right person, we can line up the right way, we can avoid jumping offsides. Control the controllables.’”

One of the bright areas in the game against Georgia Tech was the work of kicker Nathan Robertson.

The senior equaled his career long — and the program’s long — with a 46-yard field goal. He also gave the hands team to chances at getting onside kicks — Kennesaw State recovered the first one to set up a touchdown — and he also turned into a “football player.”

Kickers are not typically given much credit as true players, but the 5-foot-10, 160-pound Robertson found himself between the 5-11, 200-pound Gibbs and the end zone on a kickoff return. As the last line of defense, Robertson stood his ground and lowered his shoulder to knock Gibbs out of bounds.

For his effort, Robertson was sent airborne and helicoptered once before hitting the ground.

When asked about the tackle, Kennesaw State running back Iaan Cousin gave his kicker high praise.

As for Bohannon, he had a little different look at the situation.

“I was just glad he got up,” Bohannon said.

After two weeks in which where there were more than 20 players out of action, Bohannon said the team is starting to get some of those back from injury.

One player he specifically mentioned was offensive lineman Matt Olson. Bohannon said the offensive line, which was one of the units hardest-hit with the injury bug, is getting closer to full strength and is allowing the team to have more consistency in practice.

Another is starting quarterback Jonathan Murphy. Bohannon said he was hopeful Murphy would be able to go this week against Wofford after suffering a lower-body injury in Kennesaw State’s season opener against Reinhardt, though Murphy did not practice again Monday.

Murphy missed all of last week’s practices, and Shepherd started in his place against Georgia Tech.

Heading into the Georgia Tech game, Kennesaw State was ranked 22nd in the Stats Perform FCS Poll. Instead of falling out of the poll for the first time since Week 9 of the 2017 season with the loss, the Owls instead fell only two spots to No. 24.

Kennesaw State did fall out of the FCS coaches’ poll and was among the teams listed as getting votes.

Saturday’s game in Spartanburg, South Carolina, will be broadcast by ESPN+ and heard on the KSU Owls app. Kickoff is scheduled for 6 p.m.