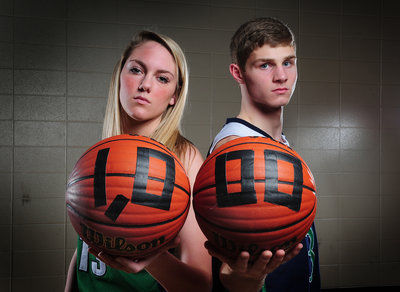 Former basketball standouts Nikki Hegstetter, left, and Ryan Blumenthal were among the inductees into Harrison's athletic hall of fame. 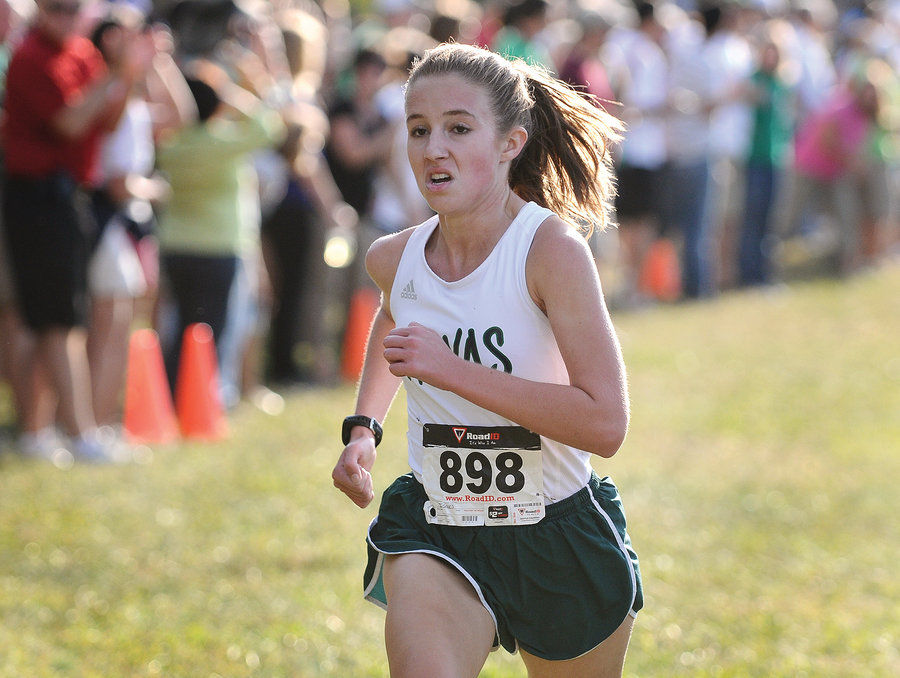 Former cross country runner Kaylee Isaacs was among the inductees into Harrison's athletic hall of fame. 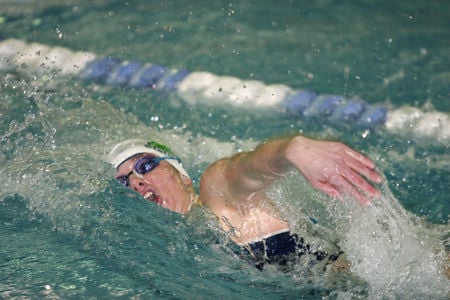 Swimmer Madison Jacobi was among the newest inductees into Harrison's athletic hall of fame. 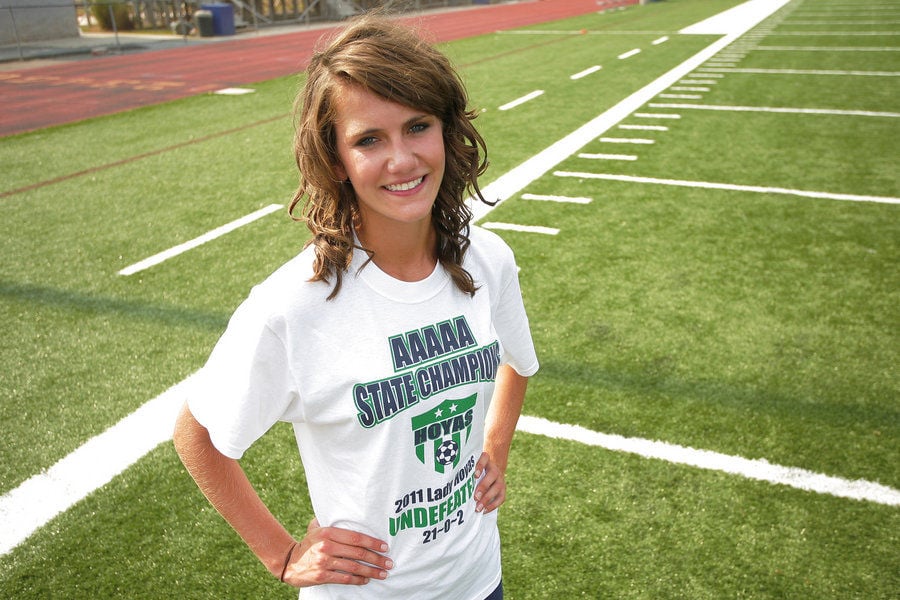 Soccer player Cicely Taliaferro was among the inductees into Harrison's athletic hall of fame. 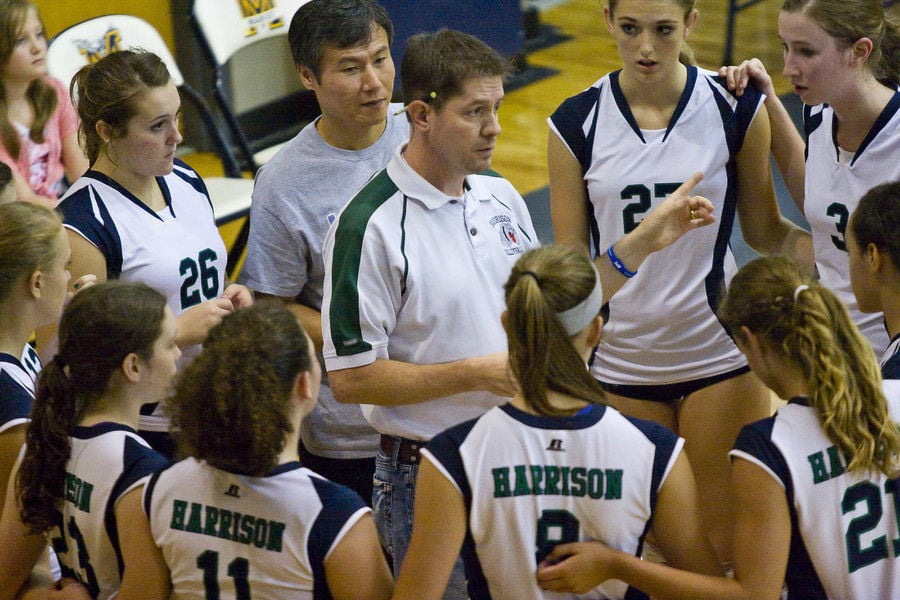 Above: Former longtime Harrison volleyball coach Clay Taylor was among the inductees into the school’s athletic hall of fame, as was his 2006 state championship team. Below: Basketball standouts Nikki Hegstetter and Ryan Blumenthal were also among the past Hoya figures to be honored. 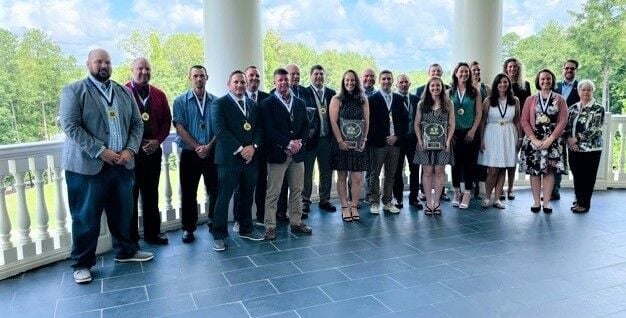 Members of the 2020 and 2021 Harrison High School Hall of Fame classes.

Former basketball standouts Nikki Hegstetter, left, and Ryan Blumenthal were among the inductees into Harrison's athletic hall of fame.

Former cross country runner Kaylee Isaacs was among the inductees into Harrison's athletic hall of fame.

Swimmer Madison Jacobi was among the newest inductees into Harrison's athletic hall of fame.

Soccer player Cicely Taliaferro was among the inductees into Harrison's athletic hall of fame.

Above: Former longtime Harrison volleyball coach Clay Taylor was among the inductees into the school’s athletic hall of fame, as was his 2006 state championship team. Below: Basketball standouts Nikki Hegstetter and Ryan Blumenthal were also among the past Hoya figures to be honored.

Members of the 2020 and 2021 Harrison High School Hall of Fame classes.

Harrison recently inducted a pair of star-studded classes into its athletic hall of fame.

The hall, which was created in 2010, now includes 71 members — 46 athletes, seven coaches, 14 teams, three contributors and one administrator.

The two classes inducted this year represent the inductions for 2020 and 2021. Each class consisted of four athletes, a coach and a state championship team.

The 2021 honorees were Rachel Baer, who helped the Lady Hoyas’ soccer team to the 2005 state semifinals; Kaylee Isaacs, an region and state cross country champion; Madison Jacobi, a two-time state swimming champion who went on to Florida State and became a two-time All-American; and Blaine Woodruff, a member of two boys state championship golf teams who competed in two U.S. Amateur championships while attending South Carolina.

Softball coach Janet Oglesby was recognized for her 292-98-3 record and leading the fast-pitch team to the Class AAAAA state championship in 2000.

The final inductee of the class of 2020 was the 2006 volleyball team, which went 42-6 and won the first state title in program history.

The class of 2020 included swimmer Connor Oslin, a high school All-American who went on to Alabama, where he was a national champion, a four-time Southeastern Conference champion and 13-time All-American; Nikki Hegstetter, who starred for four years on the girls basketball team and was the first player in program history to score 1,000 points and pull down 1,000 rebounds in a career; Ryan Blumenthal, who was a three-year starter for the boys basketball team, led the Hoyas to the 2012 semifinals and finished his career as the program’s all-time leading scorer; and Cicely Taliaferro, who was a four-year starter and captained the girls soccer team to its first state championship in 2011 with a record of 21-0-2.

Clay Taylor, who compiled a 507-190 career record at Harrison, including the 2006 state championship team, was also recognized as part of the class of 2021, as was the 1999-2000 wrestling team that won the traditional state championship.

Rachel Baer, a three-year varsity soccer player from 2003-05, was a captain her senior season and helped lead the Lady Hoyas to a region championship as well as an appearance in the state semifinals.

Baer played three years at Charlotte before transferring to Kennesaw State for her final collegiate season, earning first-team all-ASUN Conference honors. She then went on to train with the Paraguay and South Africa women’s national teams, as well as played professionally in the Czech Republic and in the United Soccer League.

Kaylee Isaacs was a four-year varsity runner for the cross country and track teams. She was named to the MDJ All-County Track team in 2009 and the MDJ All-County Cross Country team each of her four seasons. She holds the school record in the 5K at 18:35. She was an individual region cross country and state champion. She competed for Team Georgia at the Footlocker South Regional meet, was selected as the 2011 MDJ Cross Country Runner of the Year and named to the Atlanta Track Club All-Metro Team. Isaacs attended Georgia Tech where she was chosen as the Georgia Tech Total Person Spotlight Award recipient for cross country.

Madison Jacobi was a four-year varsity member of the Harrison swim team. She was a three-time county champion and two-time state champion, and the first in Harrison swimming history. In college, Madison was a scholarship athlete and team captain at Florida State University. At FSU, she was a two-time NCAA All-American and member of the ACC championship team for three years. She holds four school records at FSU and was the recipient of the Femina Perfecta Award, given to the female athlete who best embodies the Florida State motto.

Blaine Woodruff was a four-year starter on the golf team from 2006-2010 and helped the team win the region championship all four years and the state championship in 2008 and 2010. He was named All-County each year by the MDJ. He was the 2009 individual region champion and named All-State in 2010. Blaine played collegiately at the University of South Carolina where he was the team scoring leader and MVP in 2011. He was a four-time All SEC Academic honoree. Blaine played in the 2011 and 2012 U.S. Amateur Championship. After receiving his degree, Blaine spent two years as the Assistant Golf Coach at the University of Wisconsin. He is now the Associate Head Coach at Pepperdine University. Since his arrival at Pepperdine, the team has compiled 14 tournament wins, including three conference championships and one NCAA national championship in 2021. Woodruff was also a finalist for the Jan Strickland Assistant Coach of the Year award in 2021.

Janet Oglesby was the softball coach from 1992 – 2006 and was also an assistant basketball coach for her first five years. During her time the softball teams went 292-98-3. This included five area championships and three region championships. The teams qualified for the elite eight seven times, finishing state runner-up twice before winning the Class AAAAA state championship in 2000. Oglesby was named Region Coach of the Year, Cobb County Coach of the Year and Class AAAAA State Coach of the Year. She was also selected to coach several times in both the GACA and the Georgia Dugout Club All Star games and was inducted into the Georgia Dugout Club Hall of Fame.

Nikki Hegstetter was a four-year starter on the girls basketball team from 2009-2012. Averaging a double-double in each of her four seasons, she was named team MVP all four years. Hegstetter made history her senior year by becoming the only female basketball player to surpass 1000 points and 1000 rebounds in her career. She was selected as a finalist for the Naismith Trophy and was selected as Atlanta Journal Constitution’s Female Scholar Athlete of the Year her senior year. Hegstetter went on to play basketball at the University of Alabama where her 98 consecutive starts is seventh in program history. She was named to the SEC Academic Honor Roll each season.

Ryan Blumenthal was a three-year captain for the boys basketball team which culminated with him becoming the program’s all-time leading scorer with 1,232 points. He helped lead the Hoyas to a 2011 region championship and a final four run in the 2012 state tournament. Blumenthal received multiple all-region and all-county awards, however, after his senior season, he was honored with first team all region, all county, GACA All State; Second Team AJC All State, and he was the 2012 Cobb County Tip Off Club Player Of The Year. Blumenthal played college basketball for four years at Georgia College & State University where he was captain for two seasons.

Connor Oslin was a four-year varsity swimmer from 2009-2013, specializing in butterfly and backstroke. He was an All-American and two-time all-county selection. Oslin was captain his junior and senior seasons. After graduating, he continued his swimming career at the University of Alabama. During his collegiate career, he was a national champion, four-time SEC Champion, 13-time All-American and a three-time All-SEC First Team selection. His senior year his 100-yard backstroke time was an SEC record, which broke Olympian Ryan Lochte’s previous mark, and his best time in the event ranks 11th all time. Oslin capped off his senior season by winning the 2017 Paul Bryant Award, given to the top student athlete at the University of Alabama.

Cicely Taliaferro was a four-year starter at center midfield for the girls soccer team. She was also a three-time First Team All-County selection and voted team MVP all three seasons. As a senior, she captained the team to the program’s first state championship with a single season record of 21-0-2, and she received the 2011 Cobb County Player of the Year Award. She went on to become a four-year starter at the University of North Georgia, where she was a three-time all-conference and all-region selection, as well as an All-American her senior season. She was also named the 2014 Peach Belt Player of the Year and the Brine Golden Ball Award winner, leading the league in goals scored and tying UNG single season records for goals and total points.

Clay Taylor was the volleyball coach from 2002-2014. During that time he compiled a 507-190 overall record, won eight area championships, had two elite eight appearances (2013-14), two final four appearances (2004,2010), three state runner-up finishes (2002, 2011 and 2012), and a state championship in 2006. He had seven teams in the top 50 national rankings and 32 of his players went on to compete at the collegiate level. He coached three all-Americans and three state player of the year selections. Taylor is a three-time state coach of the year, eight time GACA Coach of the Year and 10-time area coach of the year.

The 2000 wrestling team completed its season with a dual record of 18-3. It won an area championship with 11 finalists, five champions and 13 out of 14 qualifying for the state tournament. The team won the traditional state tournament championship and recorded the largest margin of victory at the time of 45 points, a record that would last more than a decade. It had two individual state champions in Michael Powell and Ryan Wilman, two runners-up with Chad Monroe and Peter Ashford, and five other top 6 finishes. Four of the wrestlers continued their careers at the collegiate level.