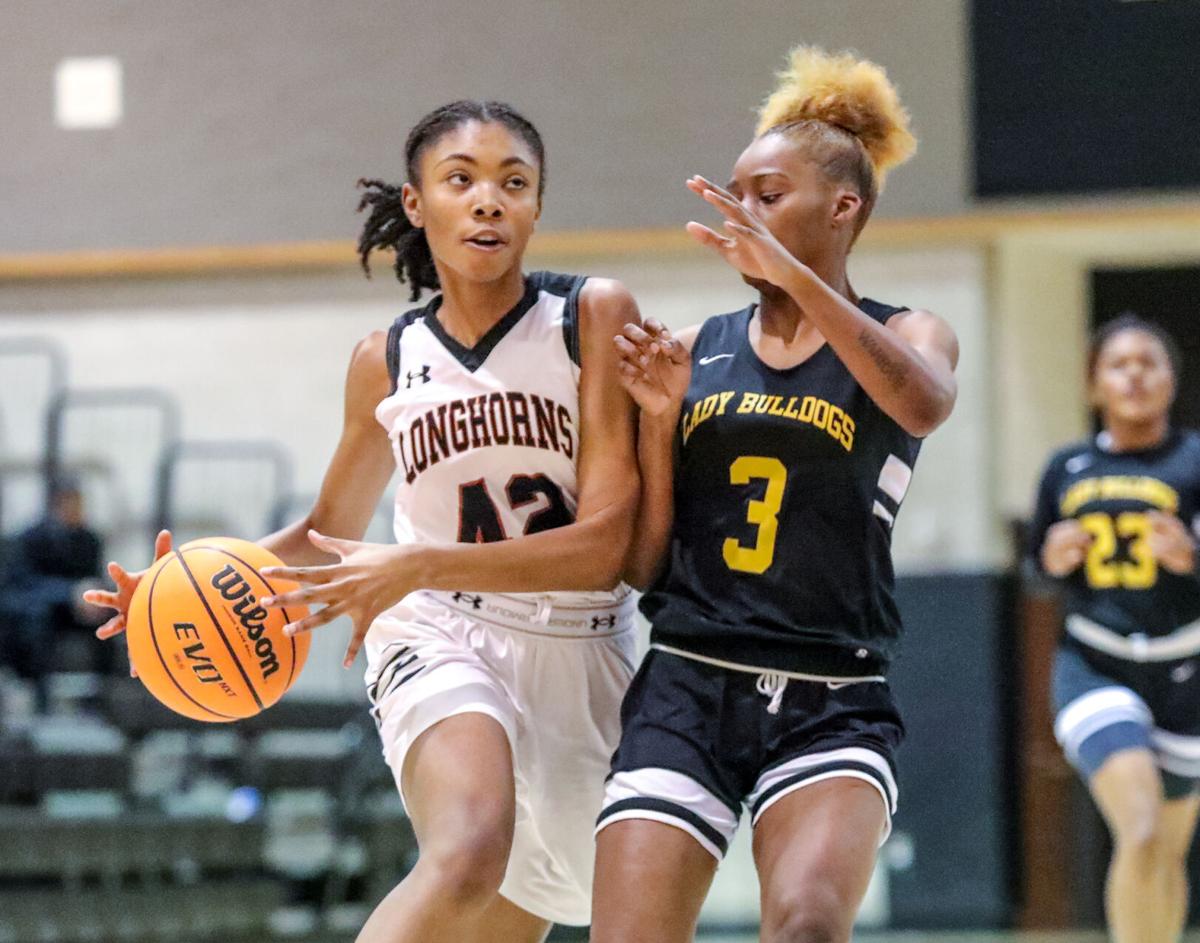 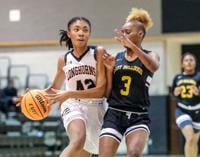 Kell vs Lithonia - Kell's Amaya Moss (42) drives toward the basket as Lithonia's Kimora Tanner (3) defends during a first round state tournament game played at Kell. The Kell Lady Longhorns won and will advance. SPECIAL / Cecil Copeland 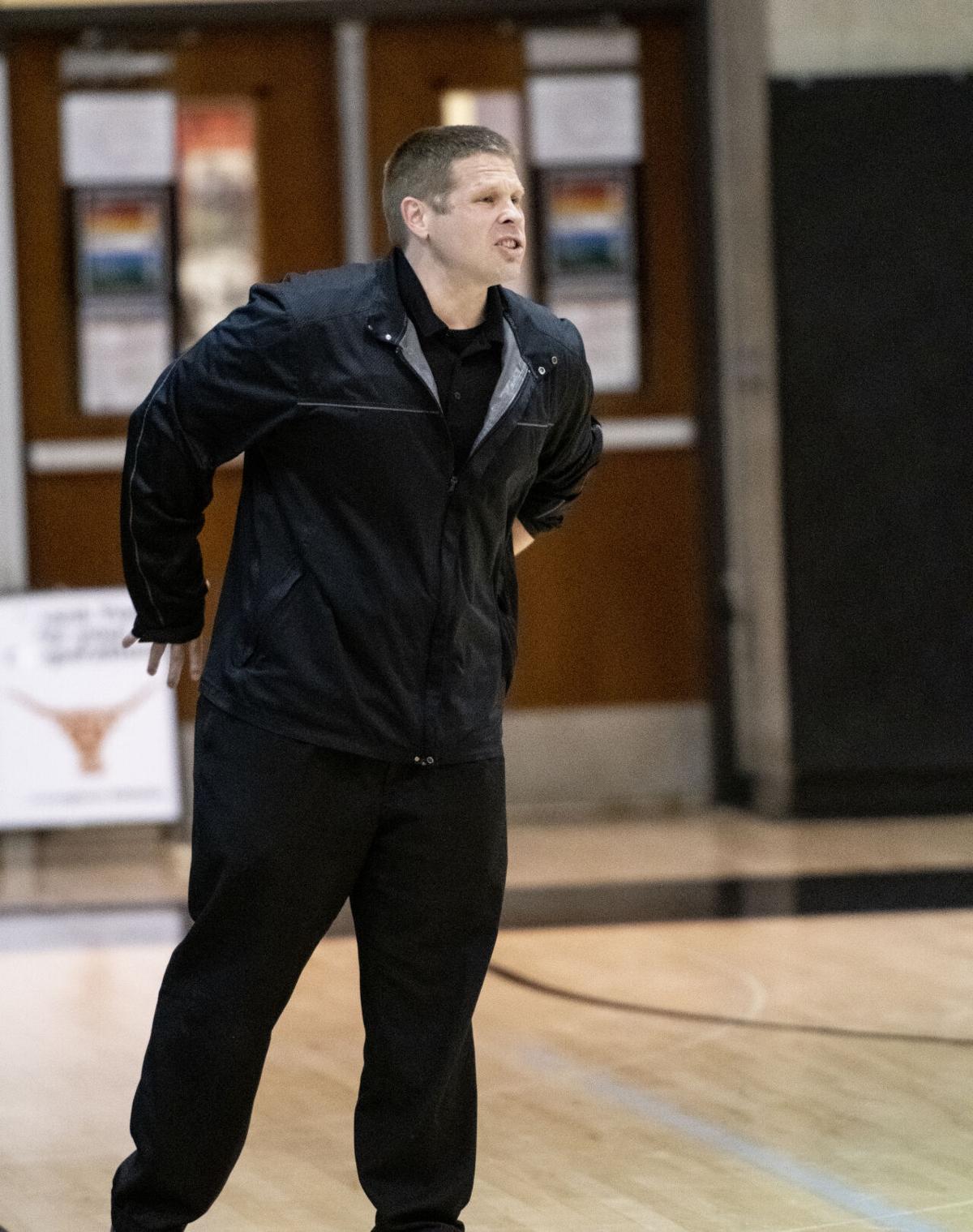 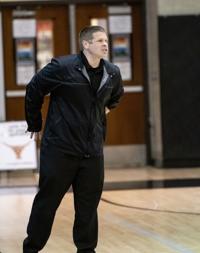 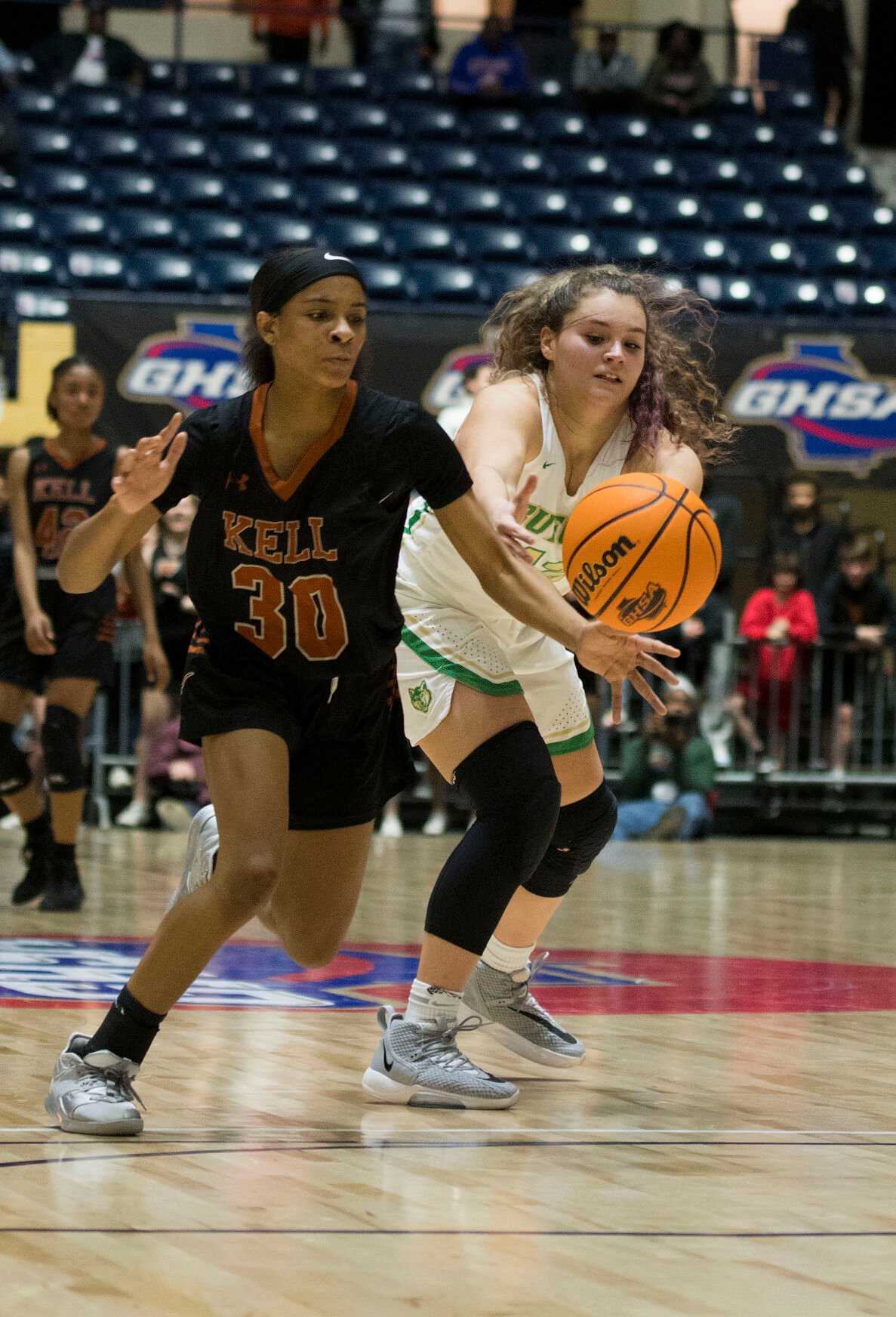 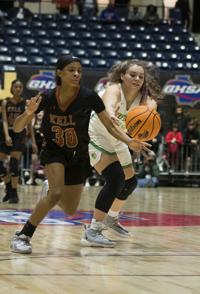 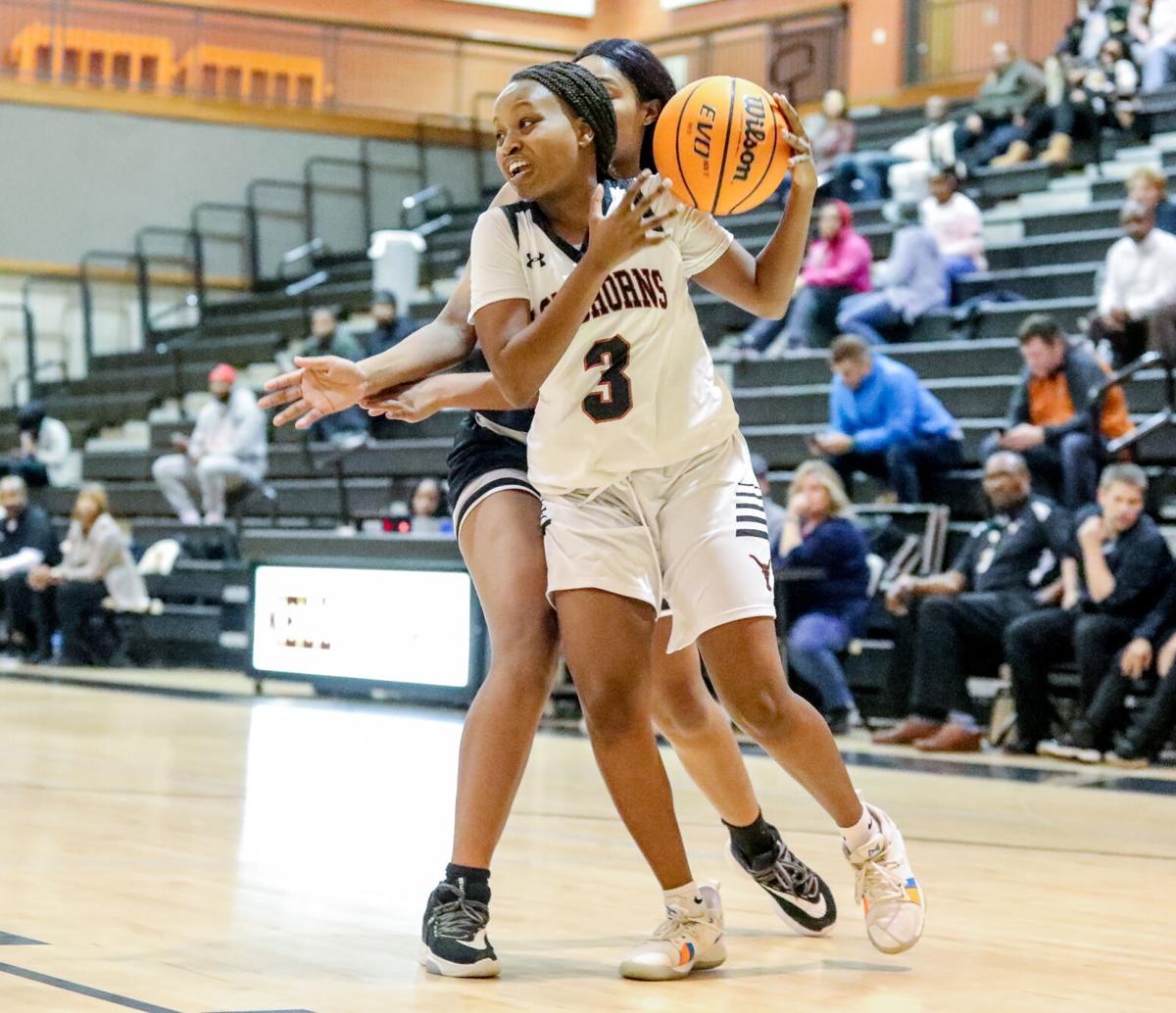 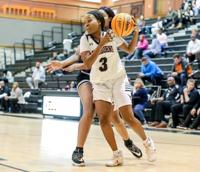 Kell vs Lithonia - Kell's Sylvia Kahoro (3) drives against Lithonia during a first round state tournament game played at Kell. The Kell Lady Longhorns won and will advance. SPECIAL / Cecil Copeland

Kell vs Lithonia - Kell's Amaya Moss (42) drives toward the basket as Lithonia's Kimora Tanner (3) defends during a first round state tournament game played at Kell. The Kell Lady Longhorns won and will advance. SPECIAL / Cecil Copeland

Kell vs Lithonia - Kell's Sylvia Kahoro (3) drives against Lithonia during a first round state tournament game played at Kell. The Kell Lady Longhorns won and will advance. SPECIAL / Cecil Copeland

The loss spoiled what could have been a perfect 33-0 season, but coach Tony Ingle Jr. did not let the loss linger over the offseason. Now, as the 2020-21 season gets underway, the Lady Longhorns are instead using the memory of the loss as a way to get better.

“We look at the past to help us in the future,” Ingle said. “We’re growing in experience, and we are looking forward to this year.”

The challenge does not get any easier, but Kell is excited about moving up to Class AAAAAA, and the team has the opportunity to stay near home most of the season as part of the all-Cobb County Region 6AAAAAA.

“We’re excited to be in Class AAAAAA,” he said. “I think it is the toughest classification in the state with proven teams like Buford, Carrollton and Westlake. I also love it from a travel standpoint. Being back in Cobb and getting to play tough teams like Sprayberry, Pope and the others is great. The girls are excited because they know everyone (on the other teams) from growing up and playing AAU with them.”

However, the best part of this season may be the fact Kell returns four starters from last year’s state runner-up squad.

They will be led by sophomore Crystal Henderson, last year’s Marietta Daily Journal/Cobb County Girls Basketball Player of the Year. She averaged 19 points, five assists and four steals per game last season, which included shooting 38% from behind the 3-point line.

Based on the first game this season, it looks like Henderson’s all-around game has improved. She scored 27 points and hit six 3-pointers against Shiloh.

“She’s in range when she steps in the gym,” Ingle said. “She’s continuing to mature. She came in as a freshman and played at such an elite level. Sometimes, she’s hard to describe. She has such a work ethic. She’s always in the gym.”

Henderson should get plenty of help this year. Junior Amaya Moss has come on strong in the offseason, and she is finally taking the outside shots Ingle has been asking her to take.

“She doesn’t realize how good she is from out there,” Ingle said.

Ingle said the team thrives on Moss’ consistency. Against Shiloh, she had nine points, 13 rebounds and six assists.

“She’s a silent assassin,” Ingle said. “She comes up with so many big plays. She comes away with a double-double almost every night.”

Ingle also said that when teams are focusing on Henderson, Sylvia Kahoro is going to find a way to beat them.

“She’s a straight shooter,” he said.

In addition, Kell will get senior Mackenzie Franklin back after she missed most of last season with an injury.

While Kell may be one of the teams on the short list to make a deep run in the playoffs, another Cobb County team is looking to reclaim its spot on the top of Class AAAAAAA.

McEachern opened the season as the No. 1 team in the state according to the Sandy’s Spiel website. The Lady Indians added Jillian Hollingshead, a 6-foot-5 center and Georgia commit, who transferred back to her home district, while Denim DeShields and Caelan Ellis bring back an experienced back court. It is a team that has a good mix of experience and youth.

McEachern lost 61-40 to Collins Hill in the state quarterfinals last season. The Lady Indians dropped the season opener to Collins Hill this week 52-51, but it is obvious the gap has closed, and once McEachern’s players get comfortable playing with one another, the outcome may be different if the teams should meet again.

One of the biggest challengers for McEachern may come from its own region.

Now in Region 2AAAAAAA, the Lady Indians will have to match up with Campbell at least two times this season. Randy McClure is entering his 30th season at the helm of the Lady Spartans, and they are coming off a trip to last year’s Class AAAAAAA semifinals.

Campbell is off to a good start. Playing in this week’s Parkview Thanksgiving Tournament, it went 2-1 with wins over Jackson, a Class AAAAA quarterfinalist a year ago, and Opelika, a state semifinalist in Alabama’s Class AAAAAA. The lone loss came to Forest Park, last year’s Class AAAAAA state champion.

Mount Paran Christian should also be considered a favorite among the Class A private schools. The Lady Eagles are testing themselves against a loaded schedule that includes such larger-classification schools Woodward Academy, Milton, Pebblebrook, Lovejoy, Marietta and Grayson.