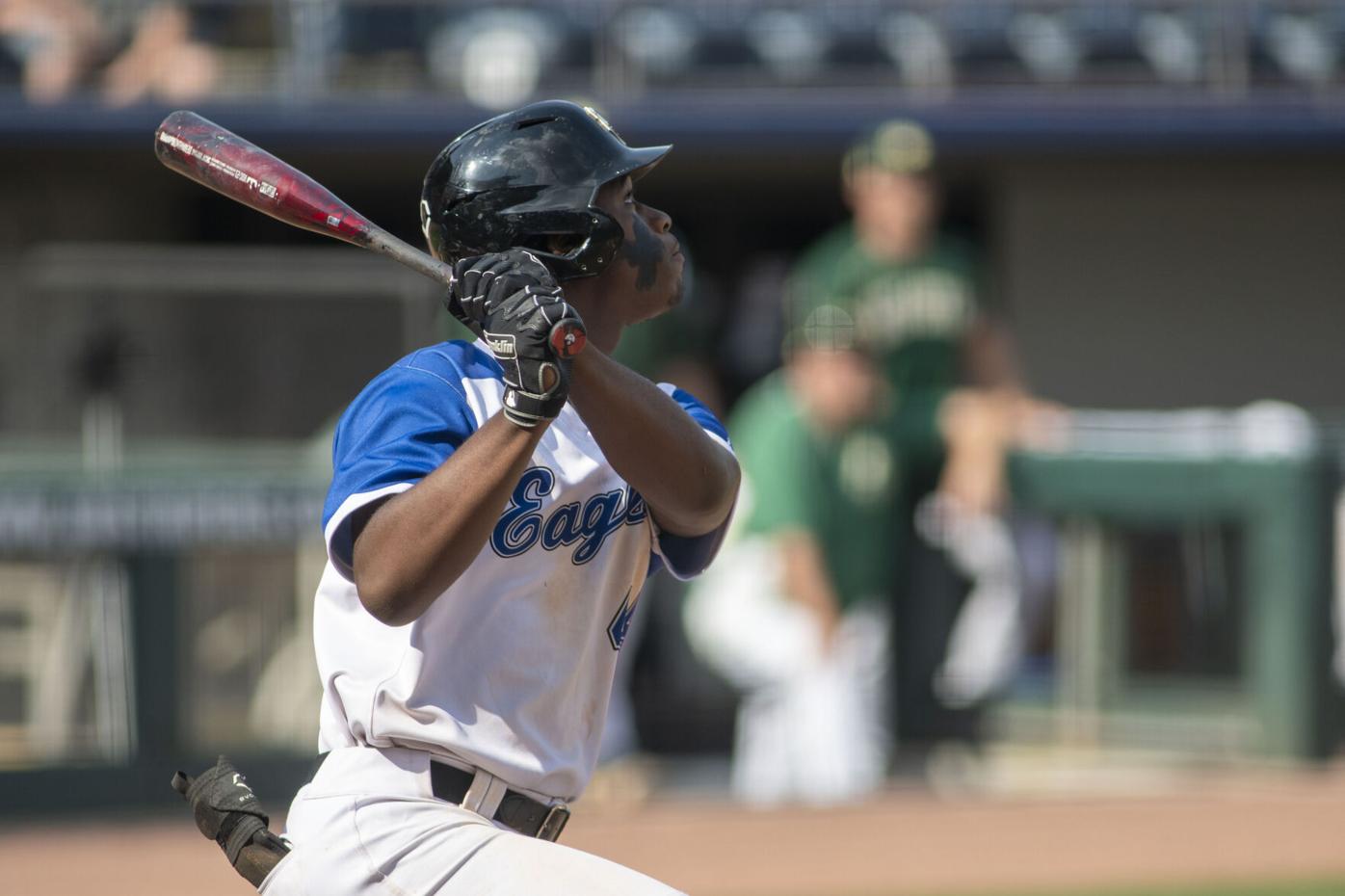 Cam Collier watches a fly ball to center during the first game of Mount Paran Christian’s Class A Private state championship series against Wesleyan at Coolray Field on Friday. 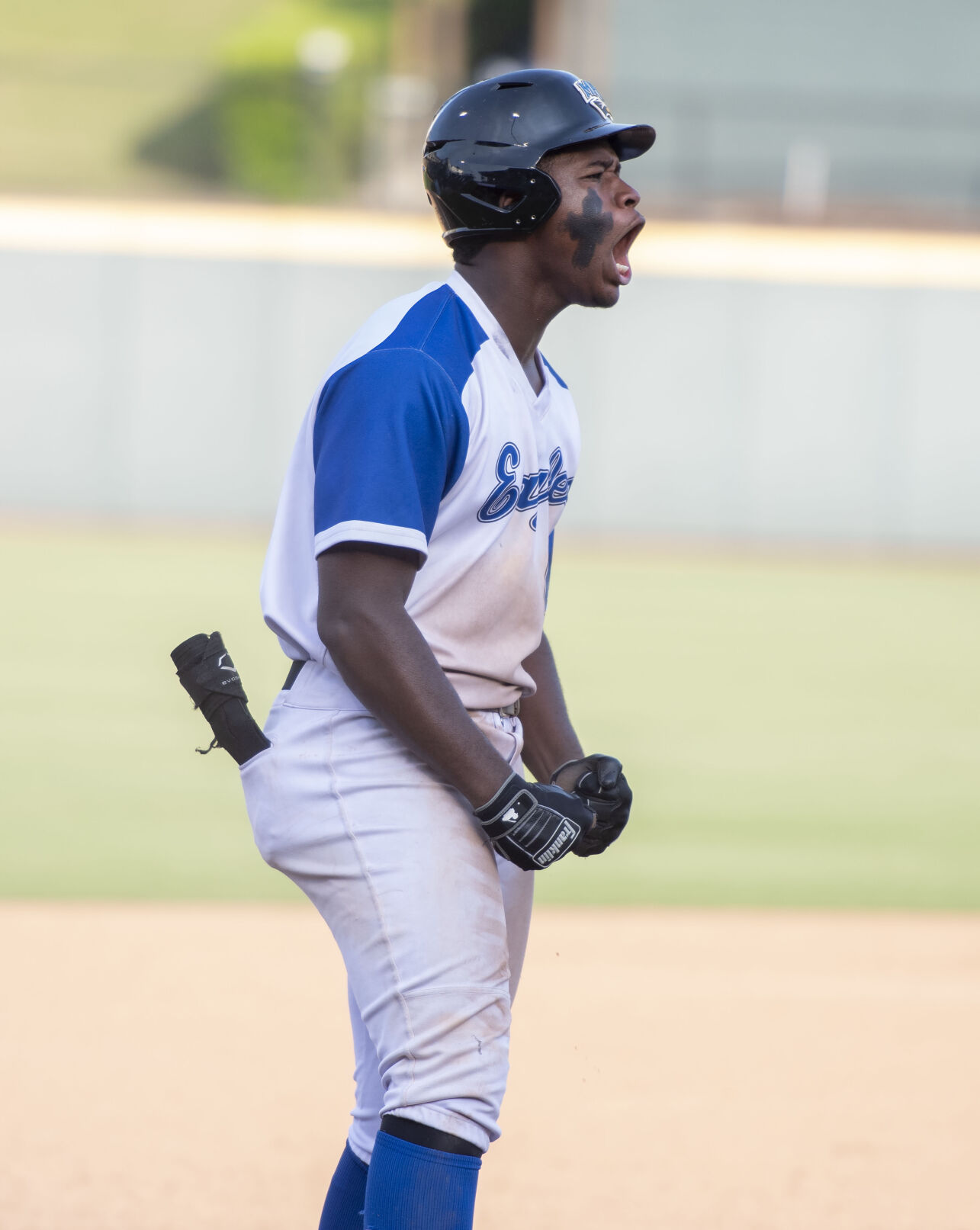 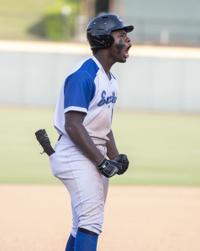 Cam Collier celebrates after hitting a two-run triple during the first game of Mount Paran Christian’s Class A Private state championship series against Wesleyan at Coolray Field on Friday.

Cam Collier watches a fly ball to center during the first game of Mount Paran Christian’s Class A Private state championship series against Wesleyan at Coolray Field on Friday.

Cam Collier celebrates after hitting a two-run triple during the first game of Mount Paran Christian’s Class A Private state championship series against Wesleyan at Coolray Field on Friday.

Cam Collier is a unique talent.

When Mount Paran Christian needed the big hit in the playoffs, he got it. When the Eagles had a must-win game, they pitched them to victory, and when they needed a save to advance to the state semifinals, he got it.

In a 2-all tie in the bottom of the ninth inning against Fellowship Christian, Collier hit a ball over the right field fence that may not have landed yet to send Mount Paran to the state championship series.

Of course, Collier may have saved his best for last. In Friday’s title matchup with Wesleyan, his two-out, two-run triple gave Mount Paran two key insurance runs in Game 1, and then he pitched a four-hit shutout in Game 2.

“Big players make big plays in big games, and he’s a big-time player,” Mount Paran coach Kyle Reese said. “He loves this. He thrives off this. This is why he plays baseball.”

Collier, though, doesn’t necessarily see it that way.

“I just call it being ready,” he said.

Collier has good genes. His father, Lou, was a utility player in the major leagues for eight seasons with Pittsburgh, Milwaukee, Montreal, Boston and Philadelphia from 1997-2004.

So it’s no surprise that Cam Collier can do a lot of things.

He’s a 6-foot-2, 210-pound five-tool player. He hits for average and power, he can throw, he can run and he can play defense. He’s committed to Louisville and is considered one of the top five players nationally for the class of 2023.

That means Collier is still a sophomore.

Reese said he’s never seen a sophomore who was as dominant as Collier was. He said there is nothing Collier can’t do and it appears to be true.

Over the last 15 years, there have been a number of players from Cobb County who are now in the major leagues, or top prospects ready to leave their mark.

Dansby Swanson, a former Marietta High School standout, is in his sixth season as shortstop of the Atlanta Braves and may be the best all-around player we have in the bigs. Michael Chavis used to hit mammoth home runs for Sprayberry and is now playing second base for the Boston Red Sox, Tyler Stephenson threw out nearly every attempted base-stealer for Kennesaw Mountain, and Clarke Schmidt dominated hitters for Allatoona. Stephenson is with the Reds, and Schmidt is expected to rejoin the Yankees soon after a spring injury.

Potentially, Collier may be Swanson, Chavis, Stephenson and Schmidt rolled into one.

Chavis is the only one whose bat made the sound Collier’s does when he barrels up a pitch. Stephenson’s arm is the only one that reminds me of Collier, who throws lasers across the diamond from behind third base. In addition, he is the smoothest defender I’ve seen in high school.

Collier makes every routine play, and he makes every difficult play look routine. Against Wesleyan, he started a 5-4-3 double play on a smash to third that wiped out a potential scoring threat in Game 1, and he secured the final out of the game when he snagged a grounder and stepped on third for a force.

“He can flat out play third base,” Reese said.

When Collier takes the mound, his pitching style is free and easy. It’s effortless velocity at 92 mph to go along with two quality off-speed pitches, a curveball and an eephus pitch that locks a hitter up at 50 mph.

It’s hard to imagine a young man doing more than what he has already done, but it really looks like he is just now starting to scratch the surface of his talent.

Which will be scary to opponents over the next two seasons in high school. After that, it will become the problem of professionals, because like Swanson, Stephenson, Chavis, Schmidt and Walton’s Carter Kieboom, Collier is destined to be a first-round draft pick.