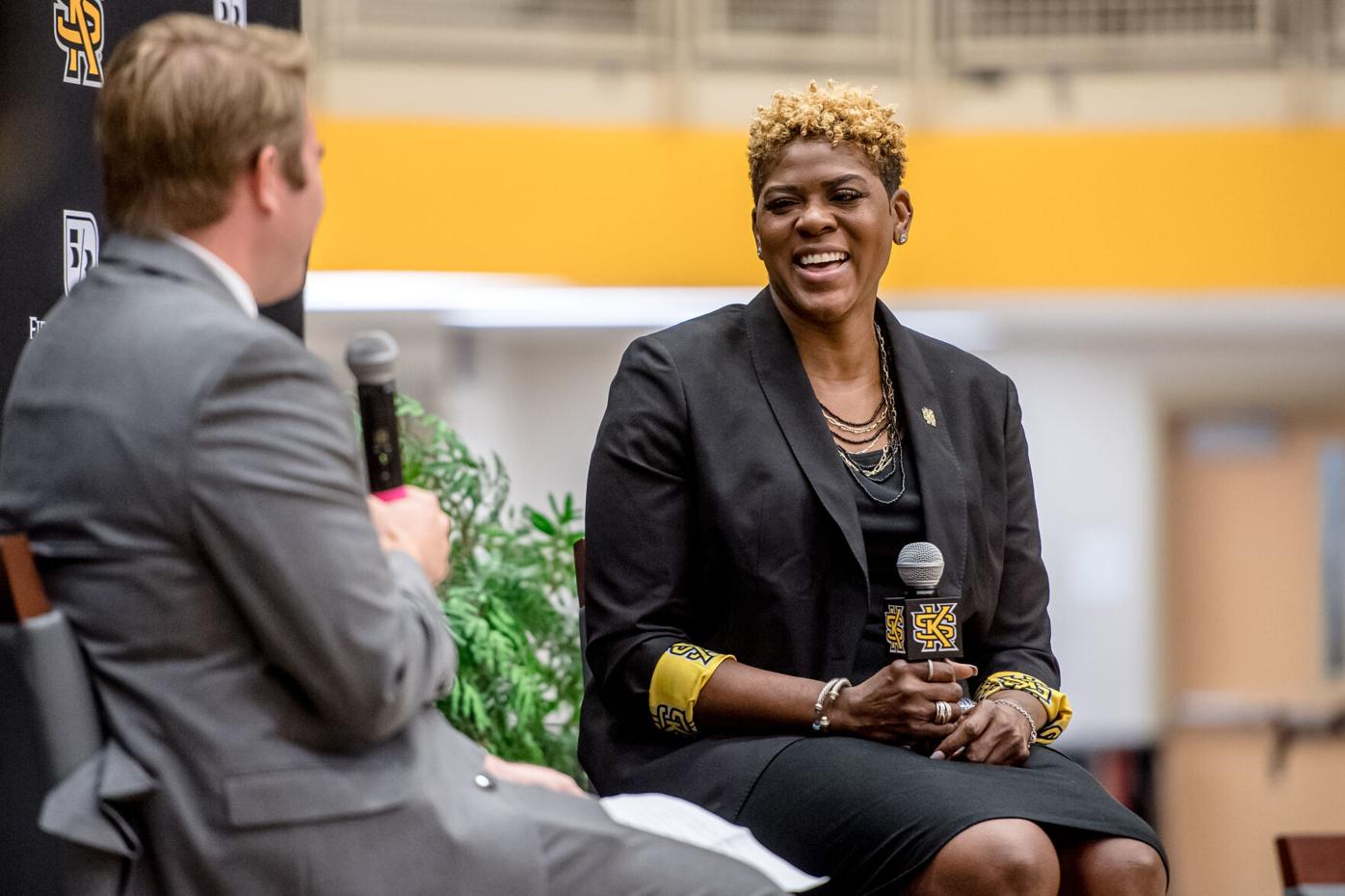 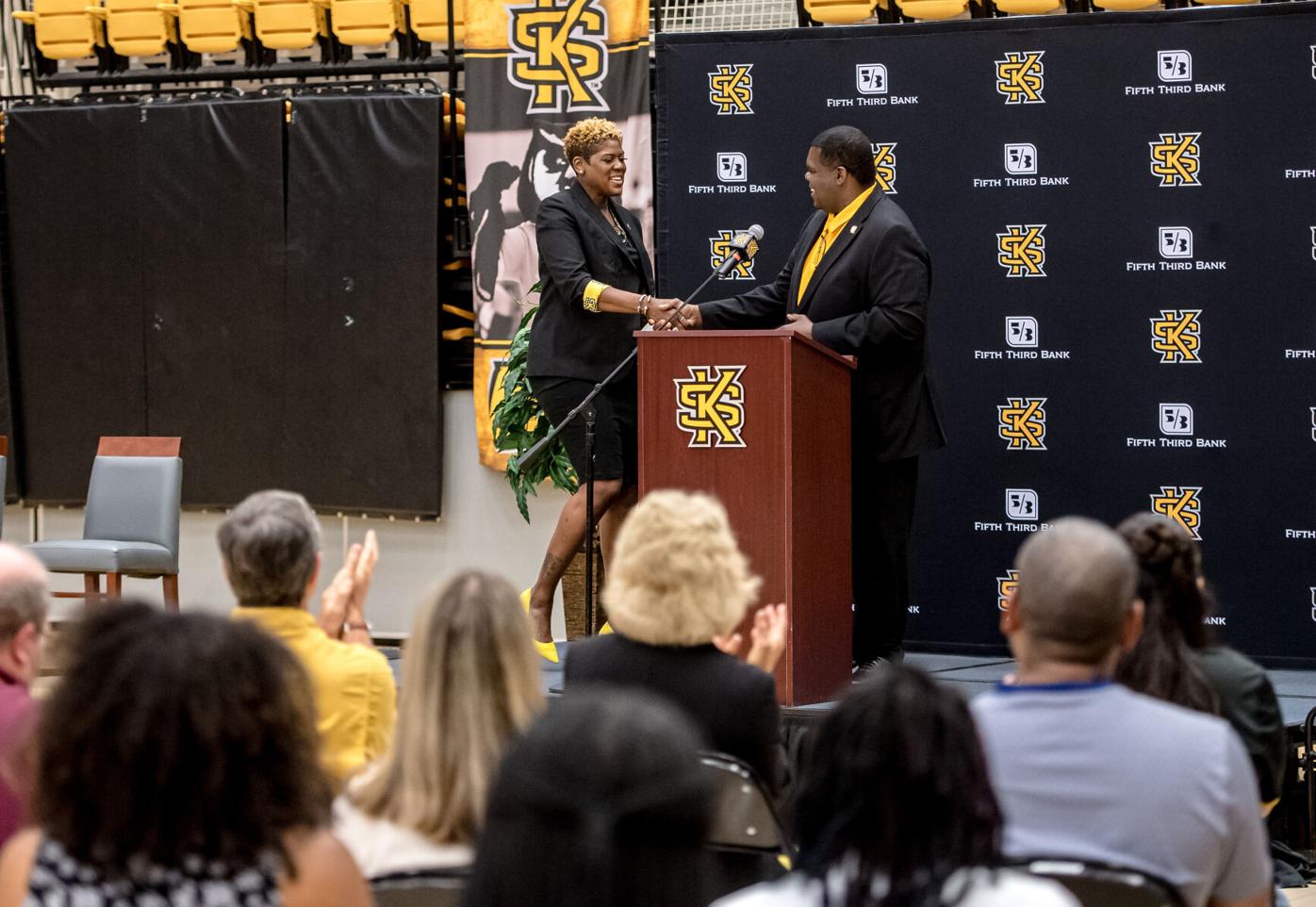 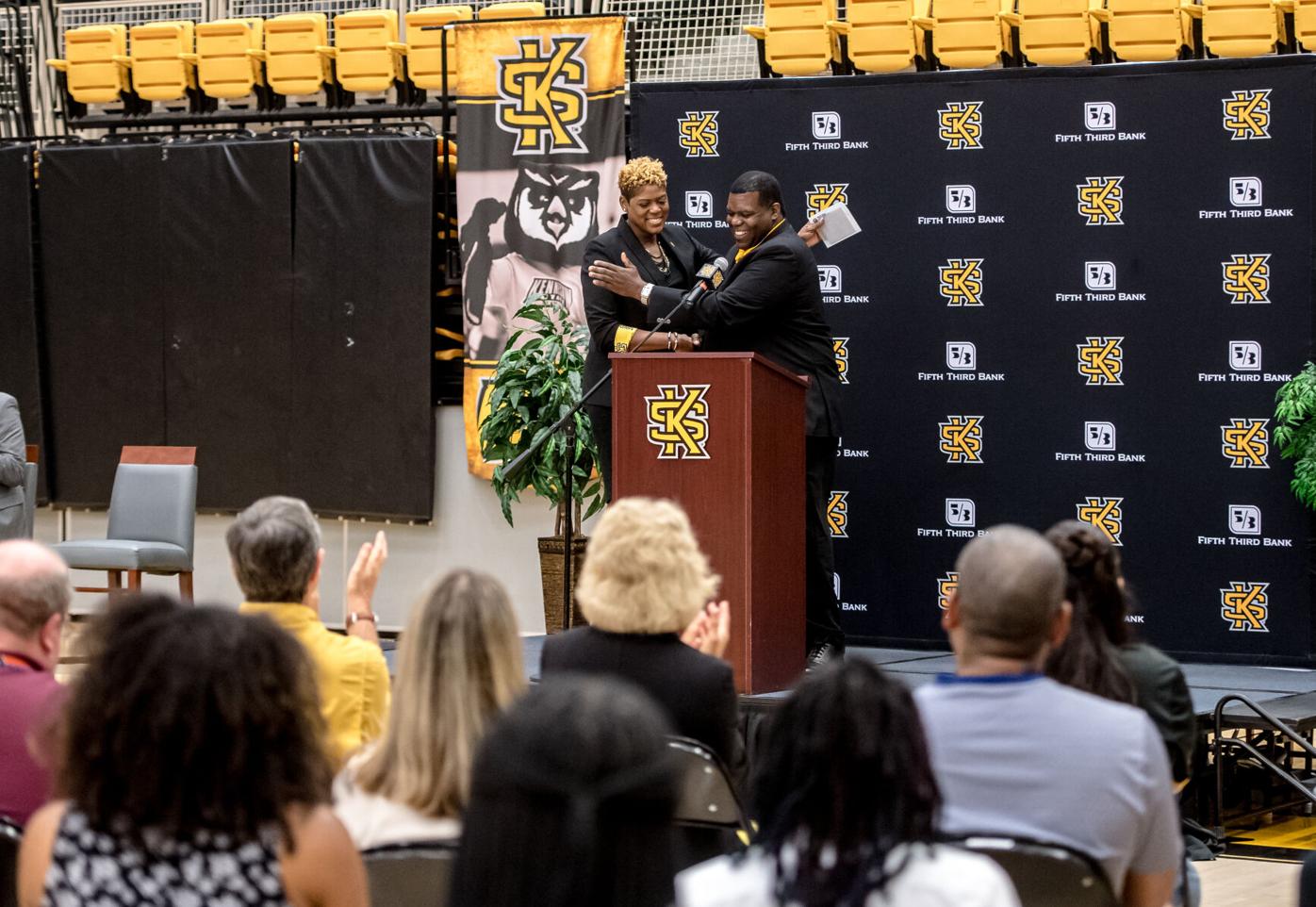 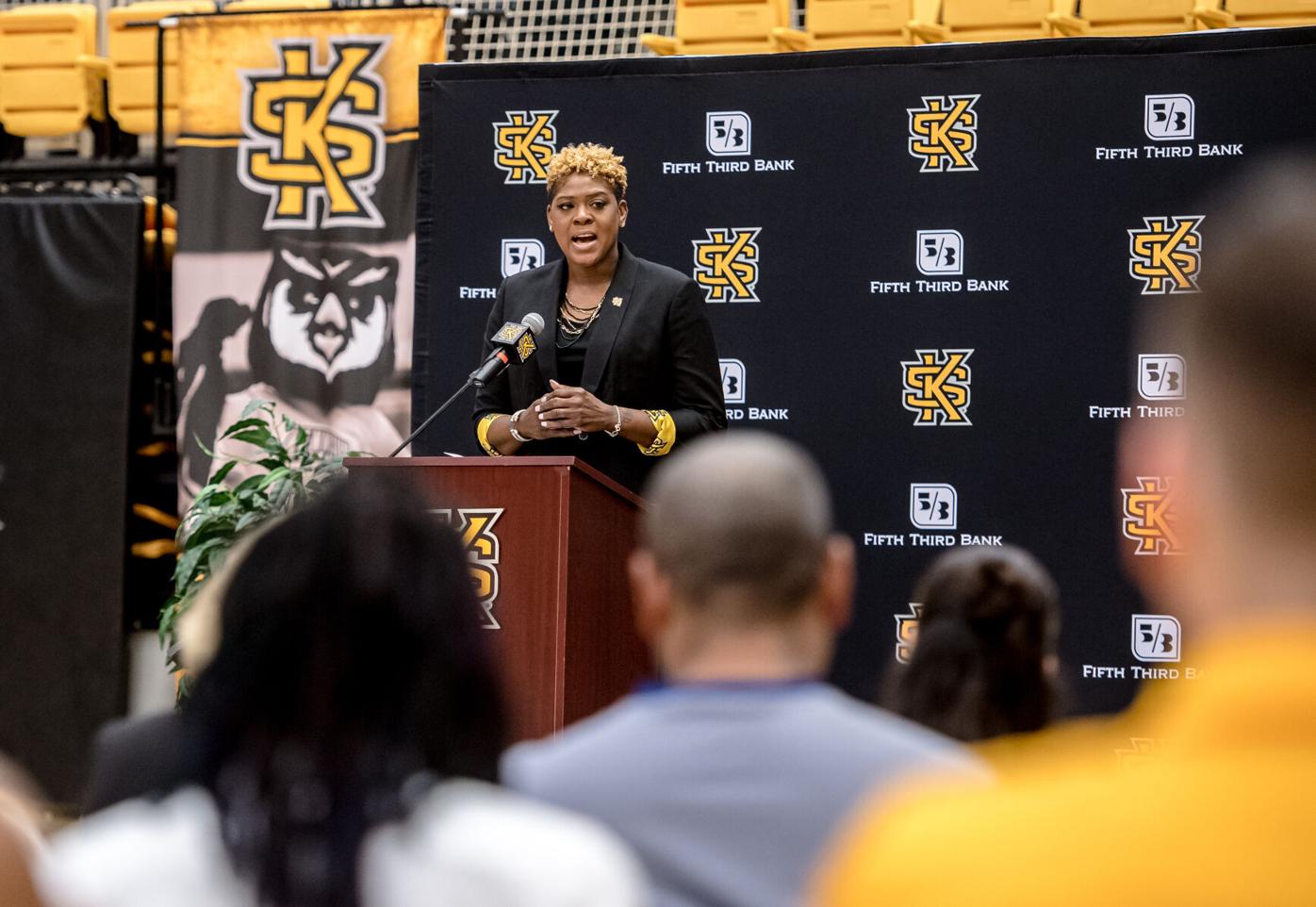 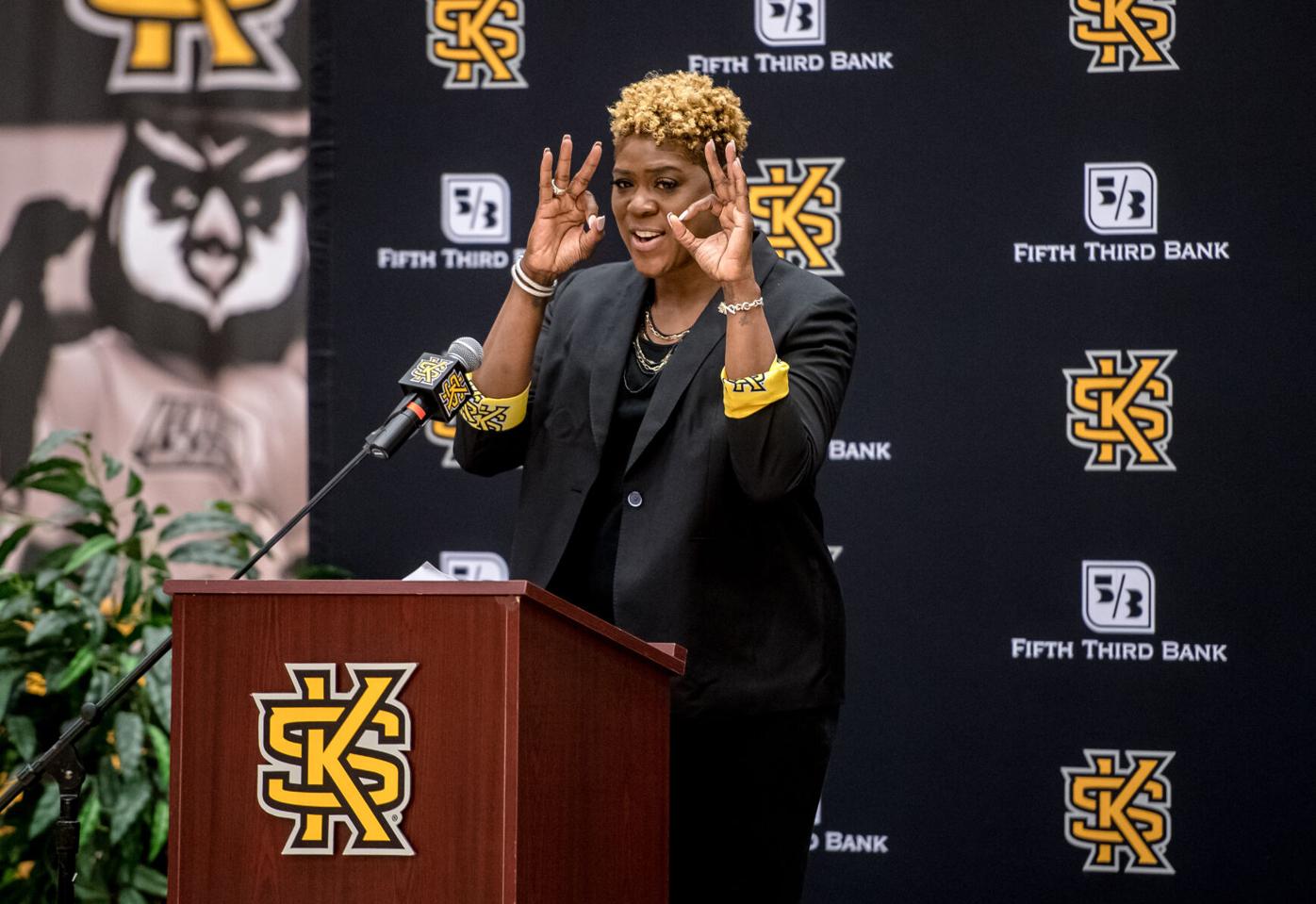 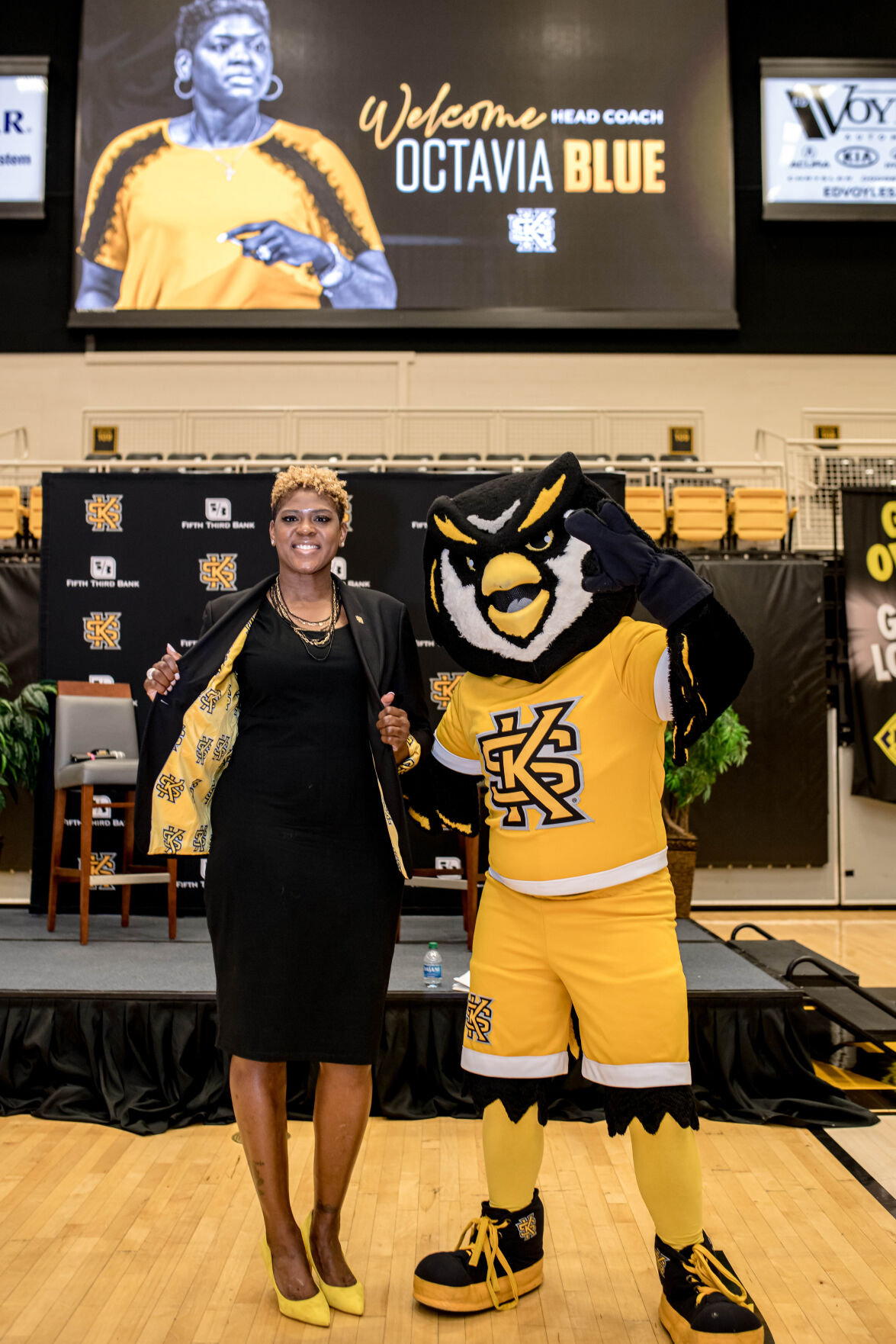 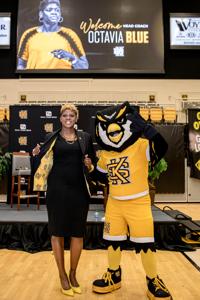 New Kennesaw State women's basketball coach Octavia Blue showing off her black and gold style with Scrappy at the KSU Convocation Center on Friday after her introductory press conference.

New Kennesaw State women's basketball coach Octavia Blue showing off her black and gold style with Scrappy at the KSU Convocation Center on Friday after her introductory press conference.

KENNESAW — With family and friends watching, Octavia Blue stood proudly in the KSU Convocation Center on Friday morning as she was introduced as Kennesaw State’s new women’s basketball coach.

Blue has the footprints to prove it, and she plans to bring the blueprints to the Owls’ program. She played collegiately at Miami, was inducted into the UM Sports Hall of Fame and named an ACC Women’s Basketball legend in 2008. Blue’s No. 10 jersey hangs in the rafters at the Watsco Center in Coral Gables, Florida.

Blue was the No. 15 pick overall by the Los Angeles Sparks in the 1998 WNBA draft and went on to play professionally for nine years with the Sparks, the Houston Comets and for teams internationally.

The 45-year-old Blue, a first-time head coach, is the fourth coach in Kennesaw State’s Division I era, and the eighth overall. She replaced Agnus Berenato, who retired this spring after 33 years of coaching, including the last four at Kennesaw State.

Blue, who said she had known Berenato for years, said she reached out to the former coach for her thoughts. Blue said Berenato also left her a personal note giving her blessing for taking over the program.

“It’s very simple,” Blue said. “She left a note in my desk for my first day at work. It was more of a personal thing, but she gave me her blessing and told me how things work around here. I respect her a ton.”

Blue, who has been coaching since 2008, spent time at St. John’s, Georgia Tech and Miami before arriving in Kennesaw. She helped lead her previous programs to nine NCAA tournaments and two Women’s National Invitational Tournament appearances.

Blue considers herself to be a player’s coach.

Now, Blue hopes to bring that leadership style to Kennesaw, where she plans to center her team around four core values that she feels are keys to success — character, commitment, discipline and family.

Blue wants a faster offense, with more focus on fundamentals and basic skills, and a high-pressure defense that makes opponents uncomfortable.

“My plan for our women’s basketball program — the ‘Blue era,’” she said. “‘I like to consider it more of a reboot versus a rebuild, because we have the tools, we have enough, but we are going to continue to keep building.”

Recruiting will also a key factor to Blue.

“Our staff is going to be visible. Like I said, we are going to visit gyms, even if they don’t have kids, so when they do have a player, Kennesaw State is on their mind.”

While recruiting from Georgia is important to Blue, she also wants to keep things local and recruit from Cobb and Cherokee counties, which are full of talent at some of the best programs in the state, led by Class AAAAAAA state champion Marietta and runner-up Woodstock.

“I know that Georgia has some of the best women’s basketball players in the world,” Blue said. “The programs here play at a high level. My main thing here is to keep them home.”

Blue, who has been on the job since May 10, was chosen from a pool of more than 100 candidates, and Kennesaw State athletic director Milton Overton said he was very excited to welcome her to campus.