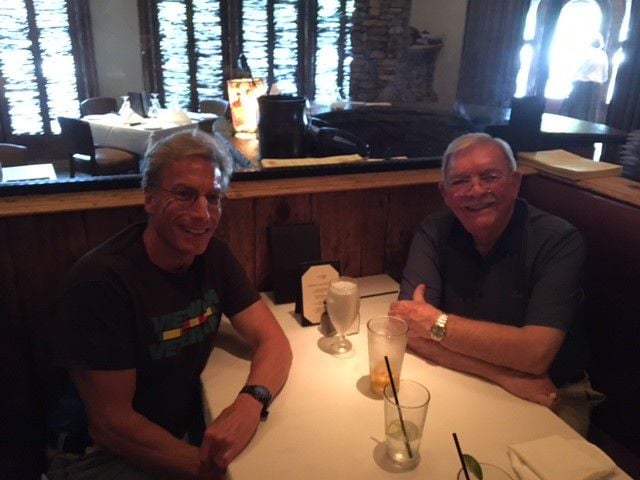 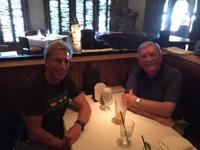 Pictured from left are Oliver Halle and Scott Chadwick. 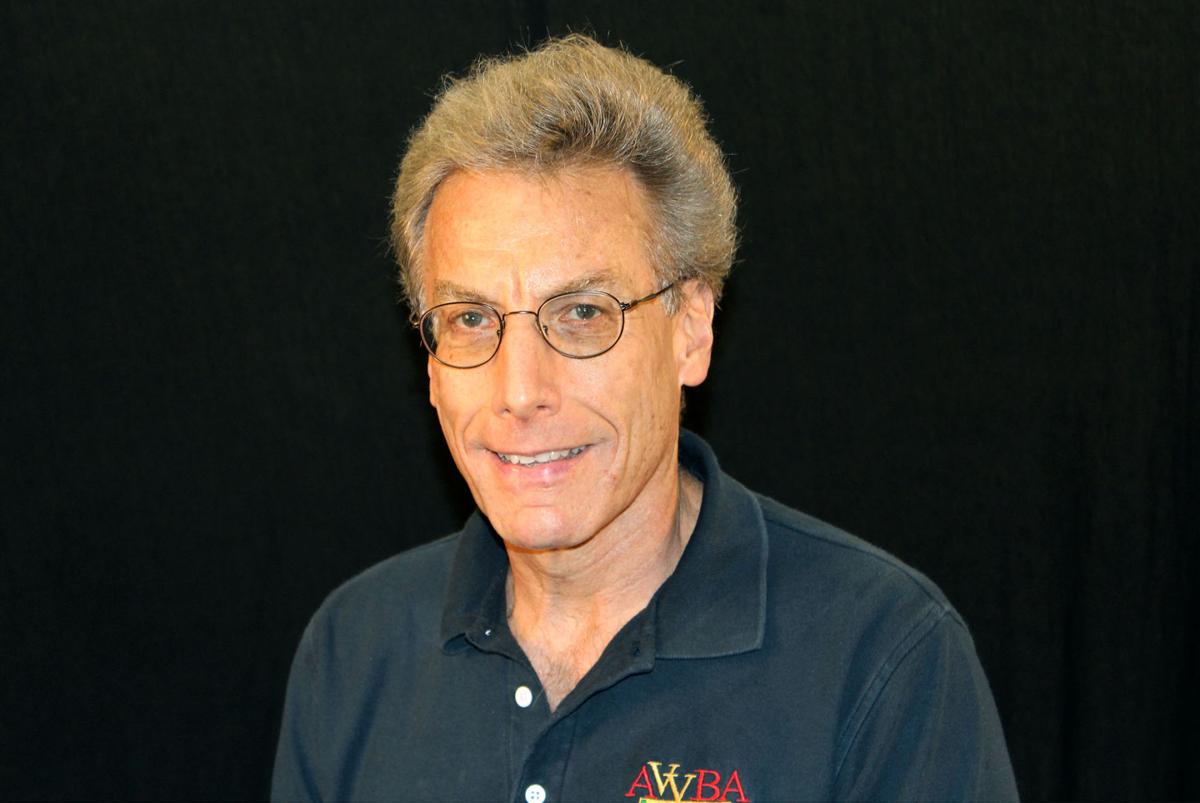 A little over two weeks ago, Thursday, March 12, Cobb County commission chairman Mike Boyce spoke to Marietta Kiwanis. His entire presentation was laser focused on the current coronavirus pandemic, what Cobb County was doing to address local concerns, and what to expect going forward.

Little did I, or probably anyone else in the room, realize that one of our longtime members and former presidents, Scott (aka ScottyBoy) Chadwick, would be our first victim. Scott died on Friday night, March 27, at Wellstar-Kennestone Hospital shortly after being diagnosed with the virus.

I first met Scott about 16 years ago, but he was well known in the community having served as a county commissioner among his many involvements in Cobb. One of Scott’s passions, despite his lack of religious faith---which he and I shared in common---was working with the Salvation Army and Kiwanis in partnership to raise money for the needy during Christmas.

Another of Scott’s great passions was reading to children at the Marietta public schools. He did it in English and Spanish having learned Spanish in Puerto Rico where he spent much of his childhood. His fluency in both languages was unrivaled. Anyone who knew Scott knew that his command of English grammar, syntax, spelling and vocabulary was in a league with the most prominent academics.

Scott served 11 years in the U.S. Navy. A good portion of his service was on destroyers. Those who never experienced destroyer life couldn’t know how unglamorous, how tedious, how hard destroyer duty can be. Scott’s assignments included a year on a tin-can off of Vietnam lending gunfire support to the troops in harm’s way, and rescue of downed pilots. It takes a strong set of sea-legs and commitment to withstand heavy seas, tough discipline, and close quarters on a small ship month in and month out. But Scott was committed and dedicated. He believed that what he was doing had purpose.

Scott was very generous, but he didn’t broadcast it. He cared about the workers at the Marietta Conference Center, and never failed to take ownership at Christmas in passing the hat at Kiwanis for the wait-staff and cooks who ensured we had quality lunches and service.

Scott and I had almost nothing in common politically. Our world views were galaxies apart. Our interpretations of the Constitution and history of America were often polar opposite. Since 2010, when I opened an account on Facebook, he and I jousted almost daily. Some mistakenly thought we were bitter enemies. Nothing could have been farther from the truth. We even got together now and then for lunch or dinner, something I will miss, especially because they always provided some levity and good conversation about things unrelated to the political world.

Scott and I used strong language in attacking our respective differences, and it often seemed very personal. It wasn’t. In fact, Scott and I often communicated privately and would laugh at the reactions readers would have to our verbal wars. It was done in great fun even if our ideas clashed. Occasionally Scott and I would remind readers that we were actually friends, that we didn’t let our political differences get in the way of our commonalities.

In the end, Scott and I shared in common what we wanted for our country, for our state, for our community---a better place to live, work, and play. Our disagreements centered on the best way to get the ball into the end zone.

Some time ago Scott had told me that he planned to donate his body to Emory University’s School of Medicine. He believed in science, that his body could contribute to the learning of medical students who would go on to serve others. That’s who Scott was.

It is time to say farewell to a fellow sailor. Your work is done. Your voyage completed. You are relieved. We have the watch. Hand salute! May you know peace. Here’s wishing you fulfillment of the Navy blessing, to have smooth seas and following winds wherever the next journey might take you.

The Agitator #313: Georgia's paragon in the Senate

Crises often identify the best and worst in people. Until someone is tested, whether it be in combat, a moral dilemma, and any number of other…

The Agitator #312: What were you thinking, Chuck?

The Agitator #311: Poster children for sycophancy

I didn’t vote for Georgia governor Brian Kemp, but he has proven the adage that you sometimes have to campaign to the extreme and then govern …

The Agitator #315: Lunacy in the time of coronavirus

Life had been going pretty smoothly for the past three years during Donald Trump’s presidency. Sure, there has been much to debate, argue and …

The Agitator #316: Every oar needs to be in the water

Elected officials rarely govern the way they campaigned. With the exception of cornerstone promises, i.e. a commitment to a particular issue(s…

The Agitator #317: Finding money in the time of coronavirus

The Agitator #318: Memorial Day should be the one unifier

In 1989, the movie, “Born on the Fourth of July” was released. It was based on the autobiography of Ron Kovic, a Marine Corps veteran who beca…