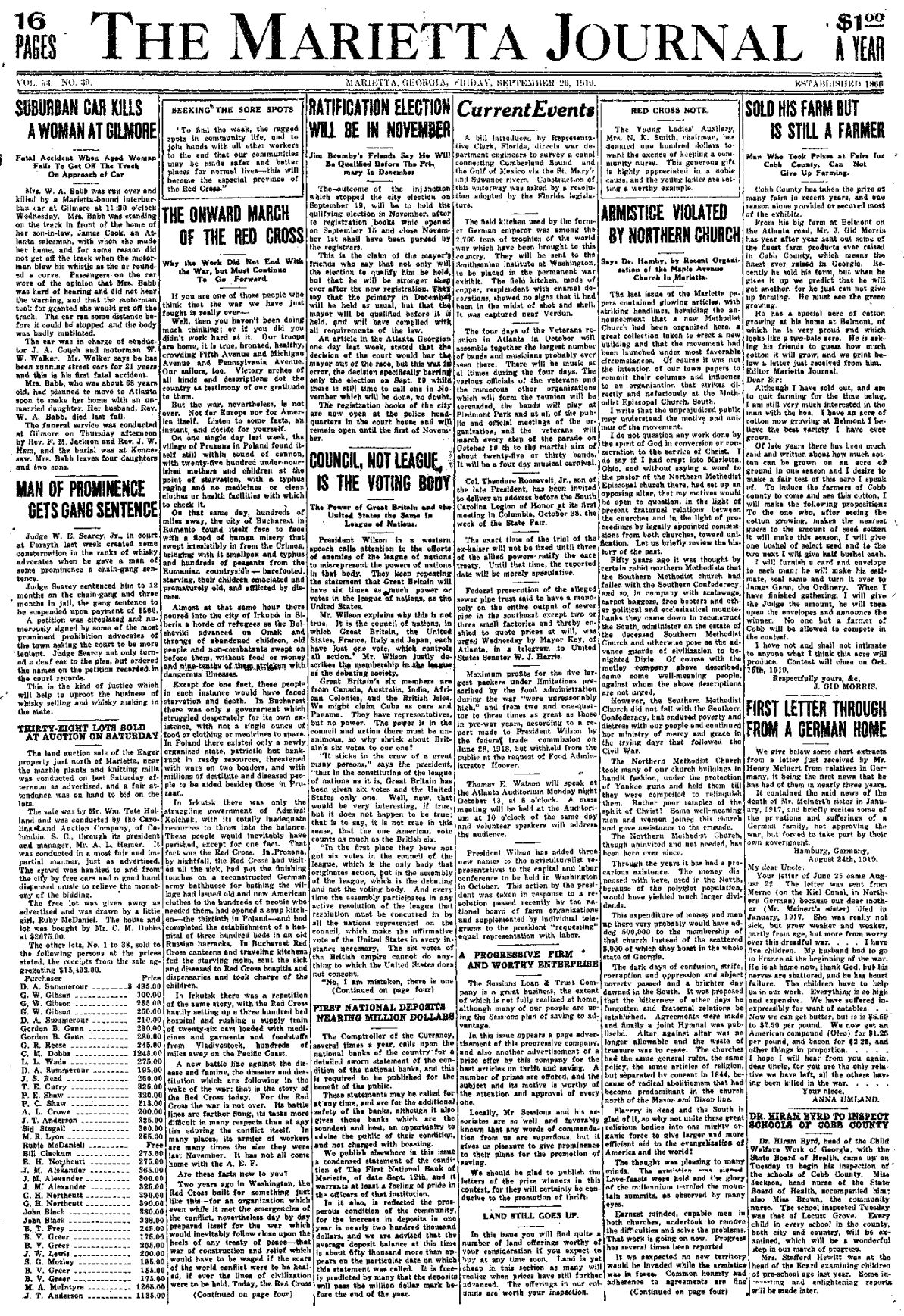 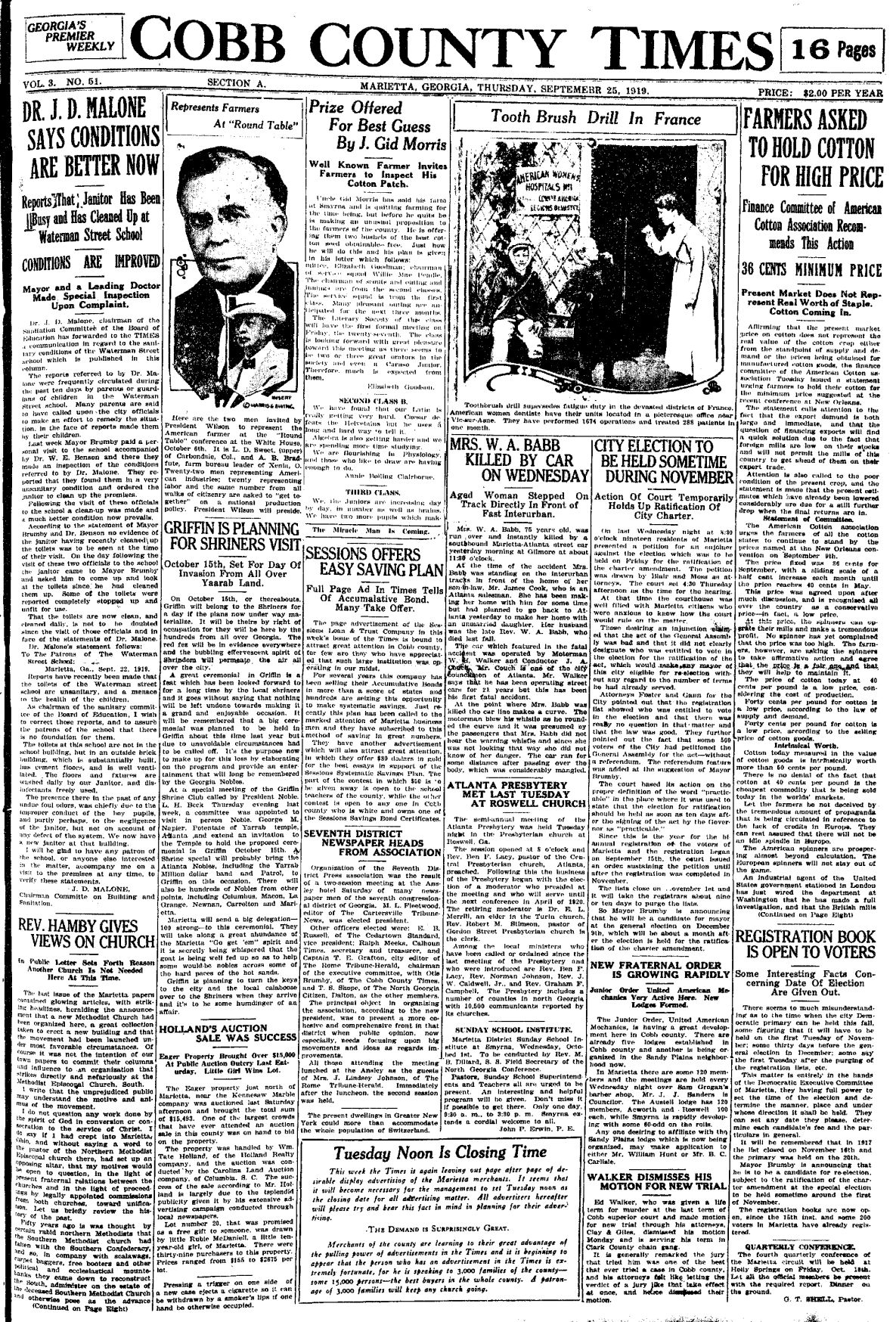 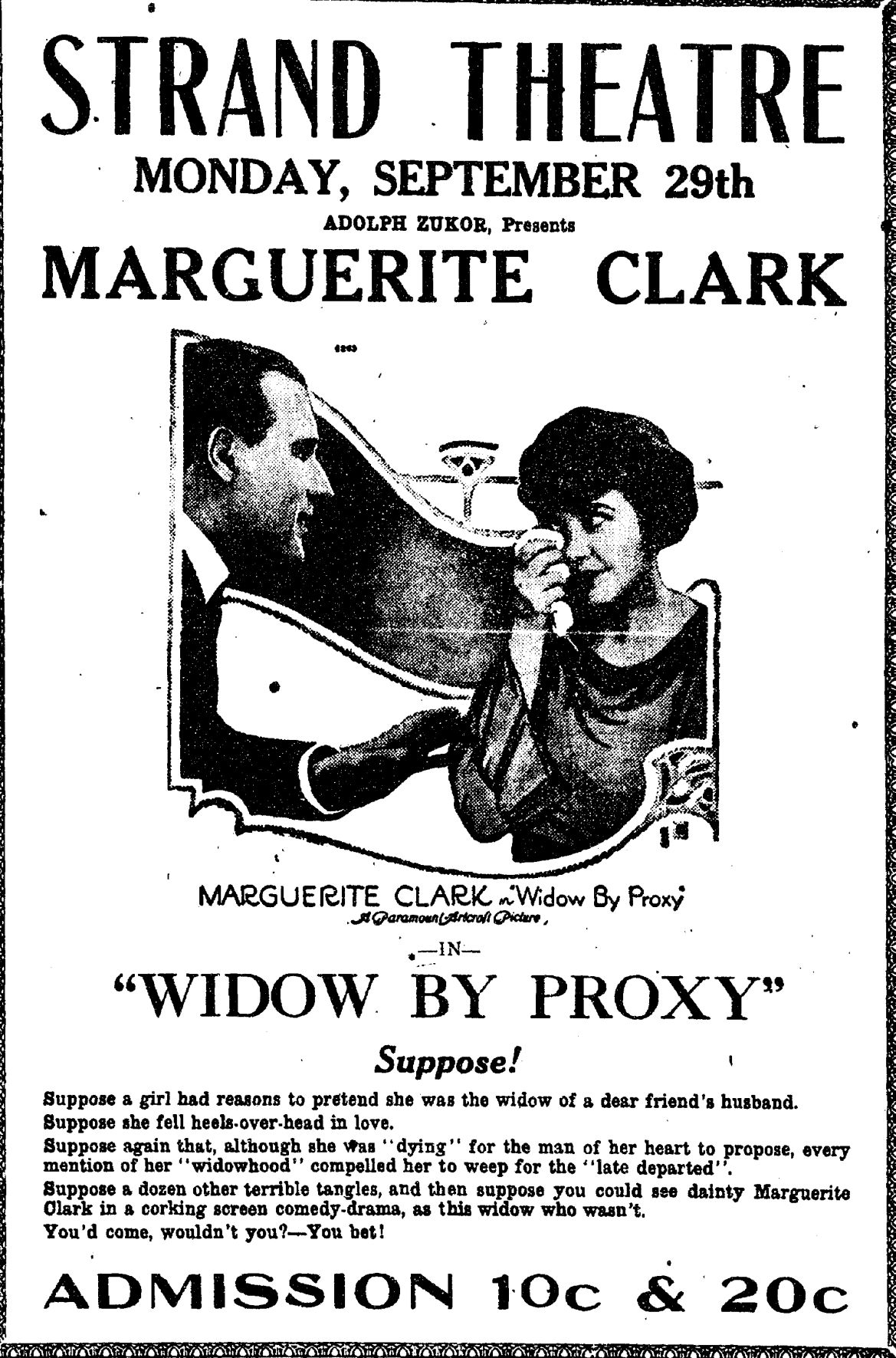 From the Friday, Sept. 26, 1919, edition of The Marietta Journal. Pictured is an advertisement for Marguerite Clark in “Widow By Proxy,” which was being shown on Sept. 29 at the Strand Theatre in Marietta. 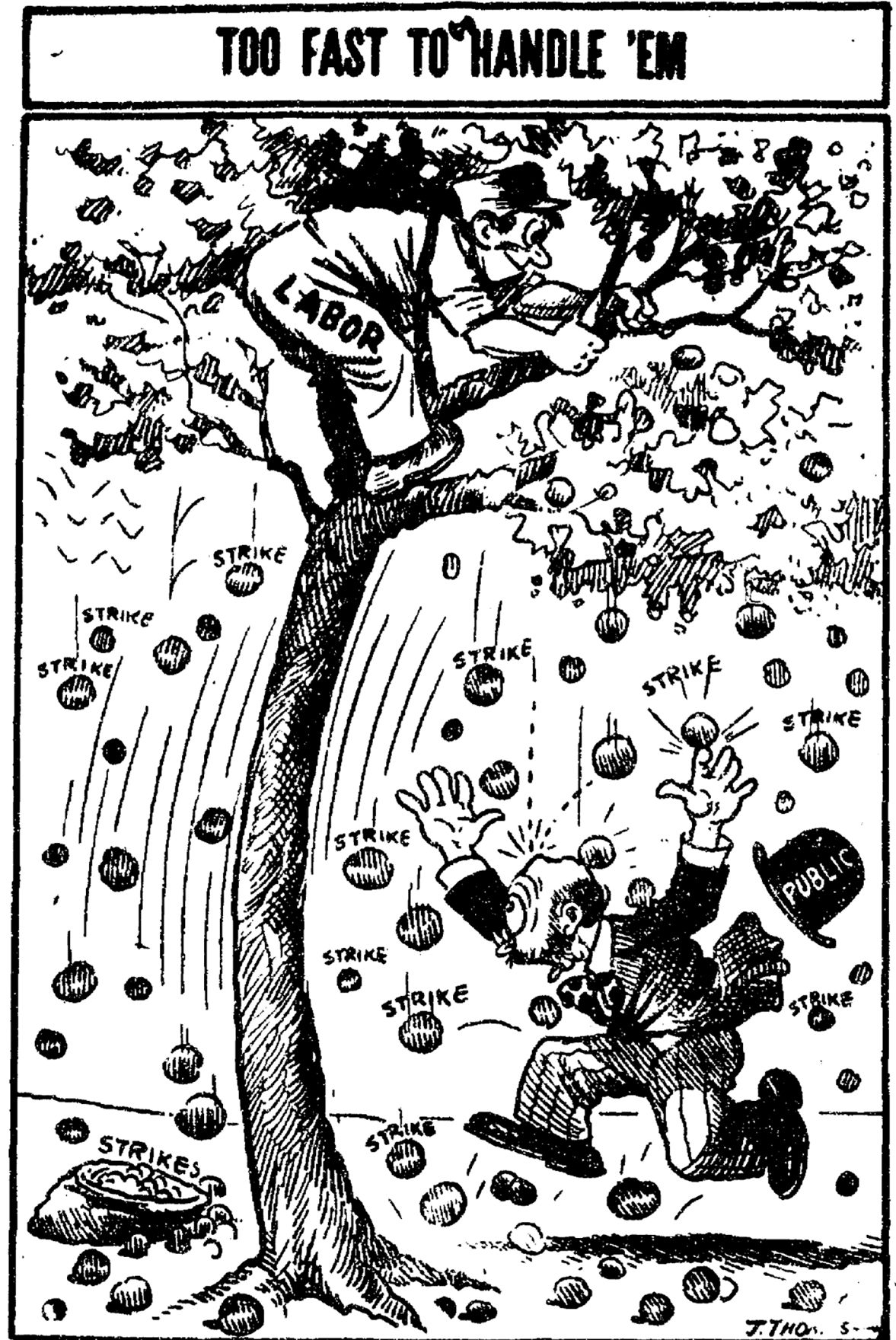 From the Thursday, Sept. 25, 1919, edition of The Cobb County Times. Pictured is an editorial cartoon illustrating the impact of all the labor strikes taking place in various industries at the time.

From the Friday, Sept. 26, 1919, edition of The Marietta Journal. Pictured is an advertisement for Marguerite Clark in “Widow By Proxy,” which was being shown on Sept. 29 at the Strand Theatre in Marietta.

From the Thursday, Sept. 25, 1919, edition of The Cobb County Times. Pictured is an editorial cartoon illustrating the impact of all the labor strikes taking place in various industries at the time.

The Thursday, Sept. 25, 1919, edition of The Cobb County Times reported that Mrs. W.A. Babb, 75, the wife of the late Rev. W.A. Babb, was run over and instantly killed by a southbound Marietta-Atlanta streetcar at Gilmore the Wednesday morning before.

Mrs. Babb, whose body was badly mutilated, was standing on the tracks in front of the home of her son-in-law. Passengers on the streetcar assumed that she was hard of hearing because she didn’t move when the streetcar came around the curve and when the motorman, W.M. Walker, blew a warning whistle at her as they approached.

The Junior Order of United American Mechanics was reported as growing rapidly in Cobb County. There were already five lodges established in the county and another being organized in the Sandy Plains neighborhood.

Powder Springs section — J.E. McKenney and Company were reported as having installed an up-to-date corn mill for their feed and warehouse business.

The Friday, Sept. 26, 1919, edition of The Marietta Journal reported that Judge W.E. Searcy Jr., in court in Forsyth the previous week, was reported as sentencing “a man of some prominence” to 12 months on the chain-gang and three months in jail for illegal whiskey.

A petition was circulated and signed by numerous people, some of them the most prominent prohibition advocates in town, asking the court to be more lenient. Judge Searcy, however, “turned a deaf ear to the plea” and “ordered the names on the petition recorded in the court records.”

Thirty-eight lots were reported as being sold the Saturday before by the Carolina Land Auction Company from the Eager Property, just north of Marietta and adjoining the Kennesaw Marble Company.

The $500 free lot was given away as advertised and drawn by Ruby McDaniel, a little girl. The lot that contained an existing home was purchased by C.M. Dobbs for $2,675. The other lots in the sale were sold for a combined price of $15,493.

An advertisement for Rogers, a grocery store at 104 Cherokee Street in Marietta, listed the following sale items — 3 loaves of bread for 25-cents, Arm & Hammer Soda for four-cents, Campbell’s Baked Beans for 12 1/2-cents and a can of blackberries, apples and peaches for 17-cents each.

The Journal editors ran a letter on the second front from J.D. Malone, chairman of the Committee of Buildings and Sanitation, that addressed recent reports going around town that “the toilets of the Waterman Street School are unsanitary, and a menace to the health of the children.”

Malone corrected the reports by saying there were no toilets in the school itself, but were located in an outside brick building that was “substantially built” with cement floors and well ventilated. The floors and fixtures were also washed and disinfected daily by the janitor. He invited the public to visit the facilities with him at any time to verify his statements.

Due West section — Nannie Story was reported as having accidentally cut her foot about four inches with an axe the Thursday before.

Cobb Police and Powder Springs firemen were reported in the Monday, Sept. 22, 1969, Marietta Daily Journal as “fruitlessly” searching for most of the Saturday before for the body of a man they had been told was left in “an old deserted well near John Ward Road.”

Police located the well and fished out stumps and a mattress. The only body found, however, belonged to a medium-sized dog that had been in the well for a couple of months.

The front of the Friday, Sept. 26, 1969, paper carried a United Press International photograph that showed Pfc. Ralph E. Cochran of Marietta sitting on his packed duffel bags, strumming a guitar and singing about home, while waiting for transportation from the Third Marine Division headquarters at Dong Ha, South Vietnam. Cochran’s division was one of the units scheduled for withdrawal from the country.