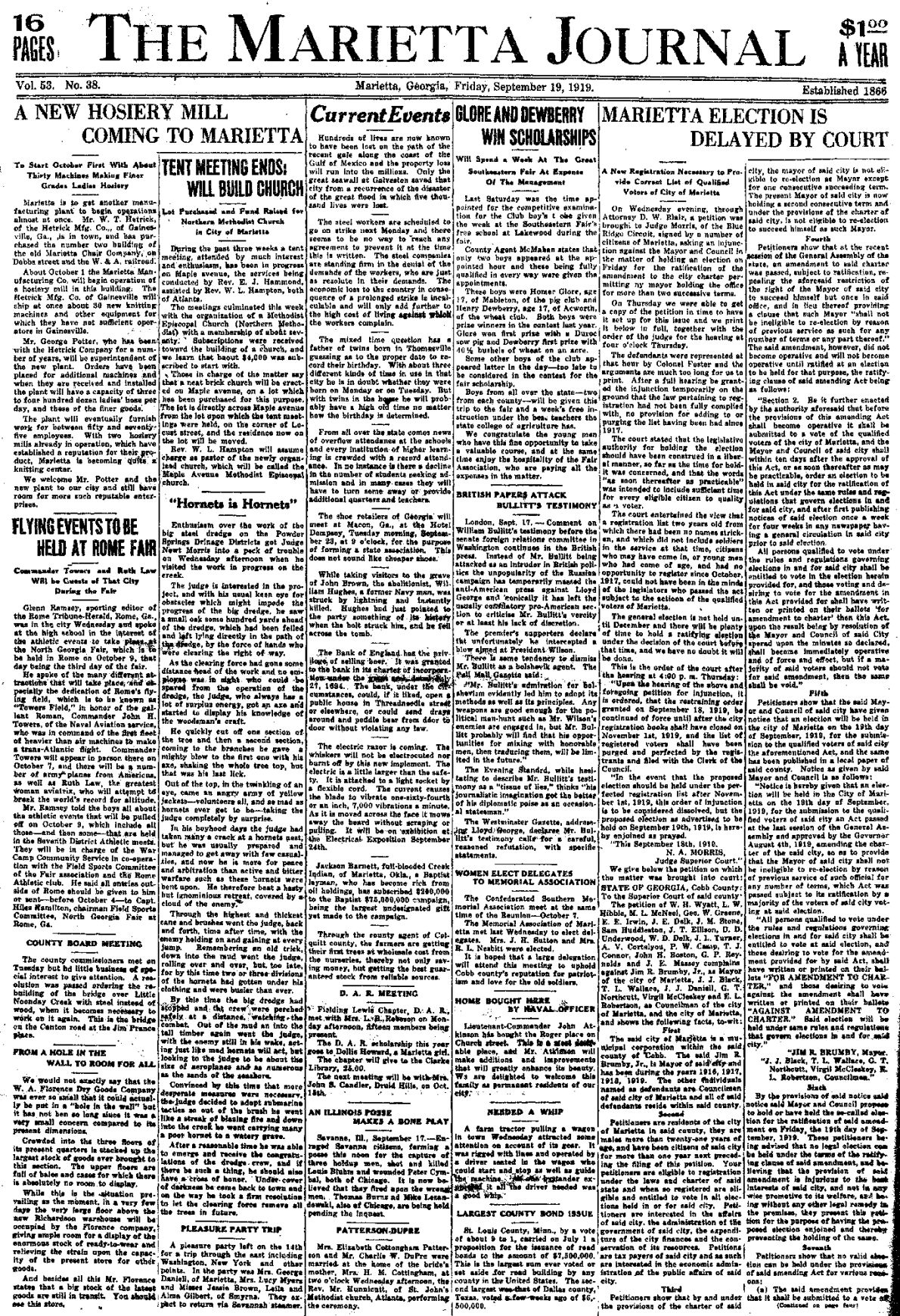 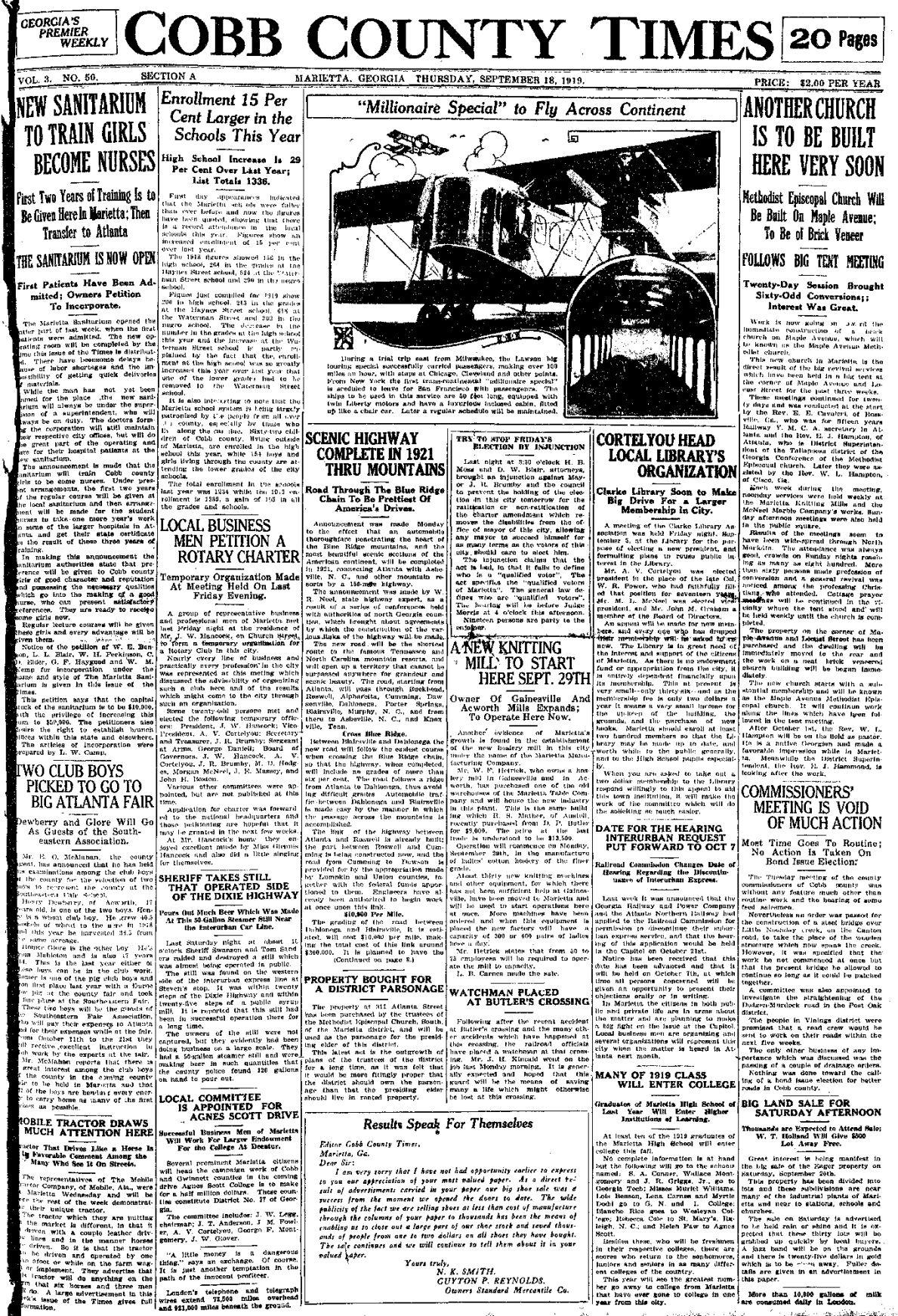 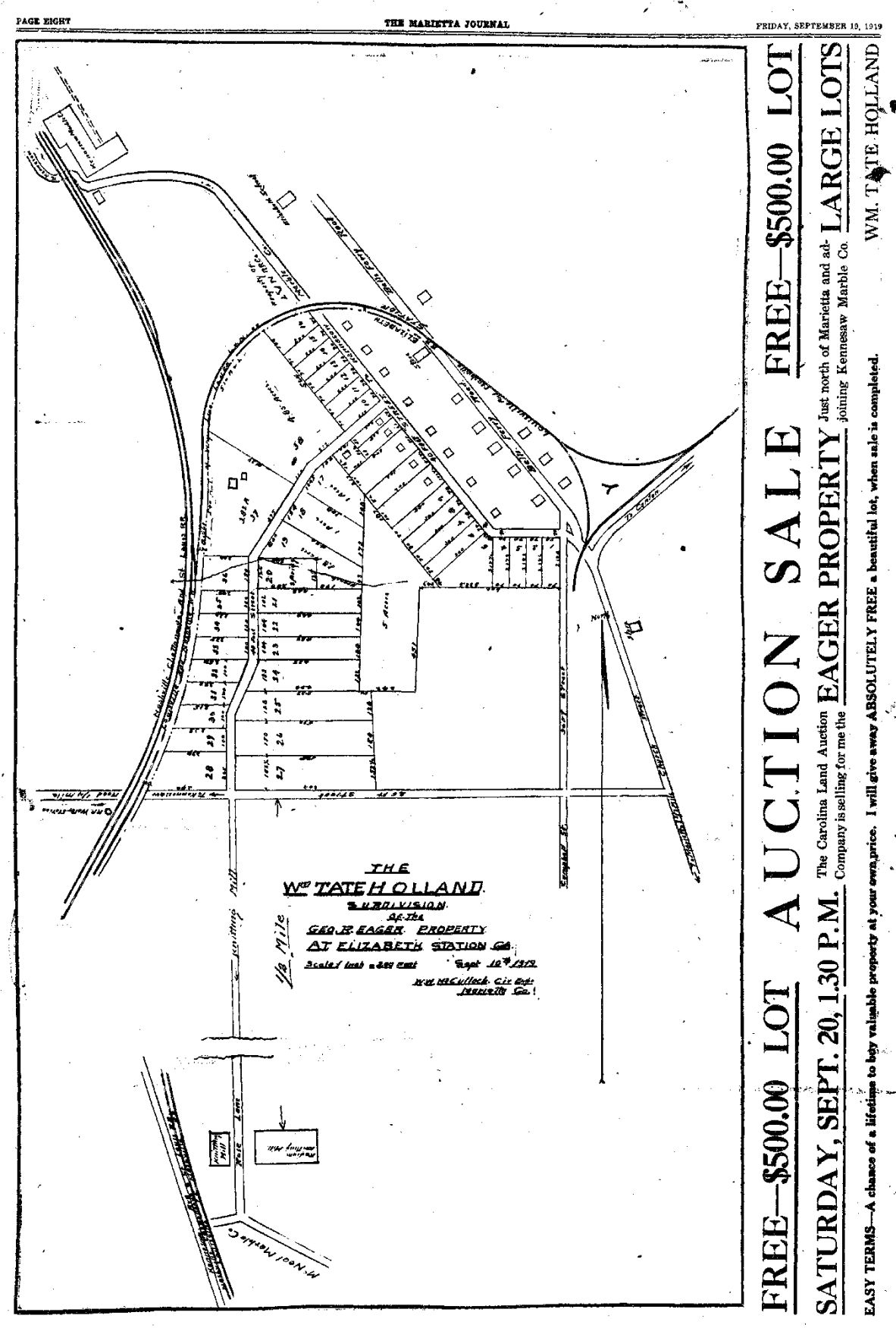 From the Thursday, Sept. 18, 1919, edition of The Cobb County Times. Pictured is a full-page ad for the auction by Carolina Land Auction Co. of the Eager Property, just north of Marietta.

From the Thursday, Sept. 18, 1919, edition of The Cobb County Times. Pictured is a full-page ad for the auction by Carolina Land Auction Co. of the Eager Property, just north of Marietta.

The Thursday, Sept. 19, 1919, edition of The Cobb County Times reported that the new Marietta Sanitarium had opened the week before, but construction delays, labor shortages and tardy deliveries prevented the operating room from being ready to use until the morning the newspaper was delivered.

The sanitarium was also to train Cobb County girls to be nurses. The students would train in Marietta for two years before transferring for more training in Atlanta.

A group of Marietta businessmen were reported as meeting the Friday before at the residence of J.W. Hancock on Cherokee Street to discuss forming a Rotary Club in the city.

Sheriff W.E. Swanson and Tom Sand were reported as having “raided and destroyed a still which was almost being operated in public” the Saturday before. It was within 20 steps of Dixie Highway and 25 steps of the public syrup mill on the west side of “the interurban express (streetcar) line at Steven’s stop.”

The owners of the still were not captured. The still consisted of a 50-gallon steamer that was making beer. The authorities also found and poured out 120 gallons of beer.

Another story out of Douglasville reported that Douglas County’s Sheriff Baggett poured out over a hundred gallons of sugar rum, corn whiskey and white lightning. The liquor was from recent raids and what had been captured in automobiles ranging from Fords to Cadillacs heading to Atlanta through Douglas County from western Georgia and Alabama.

On the Editorial Page, the editors wrote a piece, titled “The Youthful Vandal,” discussing how parents should teach their children that it is a crime to destroy municipal, county, state or government property. The piece was in response to three unidentified boys who smashed the street light at the corner of Cherokee and Lemon Streets the Friday before.

The Friday, Sept. 12, 1919, edition of The Marietta Journal reported that a new hosiery mill was coming to Marietta.

W.T. Hetrick of the Hetrick Manufacturing Co. of Gainesville was in Marietta and had purchased the No. 2 building of the old Marietta Chair Company on Dobbs Street and the Western & Atlantic Railroad. The Marietta Manufacturing Co. was expected to begin operation on Oct. 1, 1919.

Hetrick Manufacturing was to ship about 30 new knitting machines and other equipment from Gainesville to Marietta. George Potter was to be the superintendent of the new plant.

“Enthusiasm over the work of the big steel dredges on the Powder Springs Drainage Districts” was reported as having gotten “Judge Newt Morris into a peck of trouble” the Wednesday before when he visited the project.

Judge Morris noticed a small oak tree had been left a few hundred yards ahead of the dredge by the men clearing the right of way. Not wanting the dredge to be delayed, Judge Morris grabbed an axe and went to work cutting up the tree. After cutting two sections off, he started on the branches and stirred up “an angry army of yellow jackets” that took the man by surprise.

Being stung by the insects, he tried to run away from the cloud. But the horde of hornets followed him and he was forced to dive into the creek before the dredge.

On Page 8, there was a full-page ad announcing that the Carolina Land Auction Company was selling lots from the Eager Property, just north of Marietta and adjoining the Kennesaw Marble Company.

The lots were divided into one to four acres or five acres. W.M. Tate Holland also announced that he would give away a free $500 lot once the sale was completed.

Lost Mountain section — Journal correspondent Allen reported that “the boll weevil is getting as thick as grasshoppers” in his section. The boll weevil is a beetle that feeds on cotton buds and flowers. It was a major threat to the South’s cotton industry.

In the Thursday, Sept. 18, 1969, Marietta Daily Journal it was reported that the new Lindsay Hopkins Buick facility opened on the South Four Lane (U.S. Hwy. 41 South) in Marietta that morning. “The center of attention” was mostly the rock-front building and the 1970 model Buick, but also catching the eye was the large sculpture from old automobile bumpers – fashioned by Ike Hay, a student at the University of Georgia.

An announcement by President Richard Nixon appeared in the Friday, Sept. 19, 1969, paper canceling the Vietnam War draft calls for 50,000 men in November and December 1969. In addition to calling off the draft for those men, President Nixon said the induction of 29,000 scheduled for October were to be phased out over the next three months. The president said that if Congress did not act on his proposal for shifting to a lottery-type draft, he would institute a random selection system by executive order.