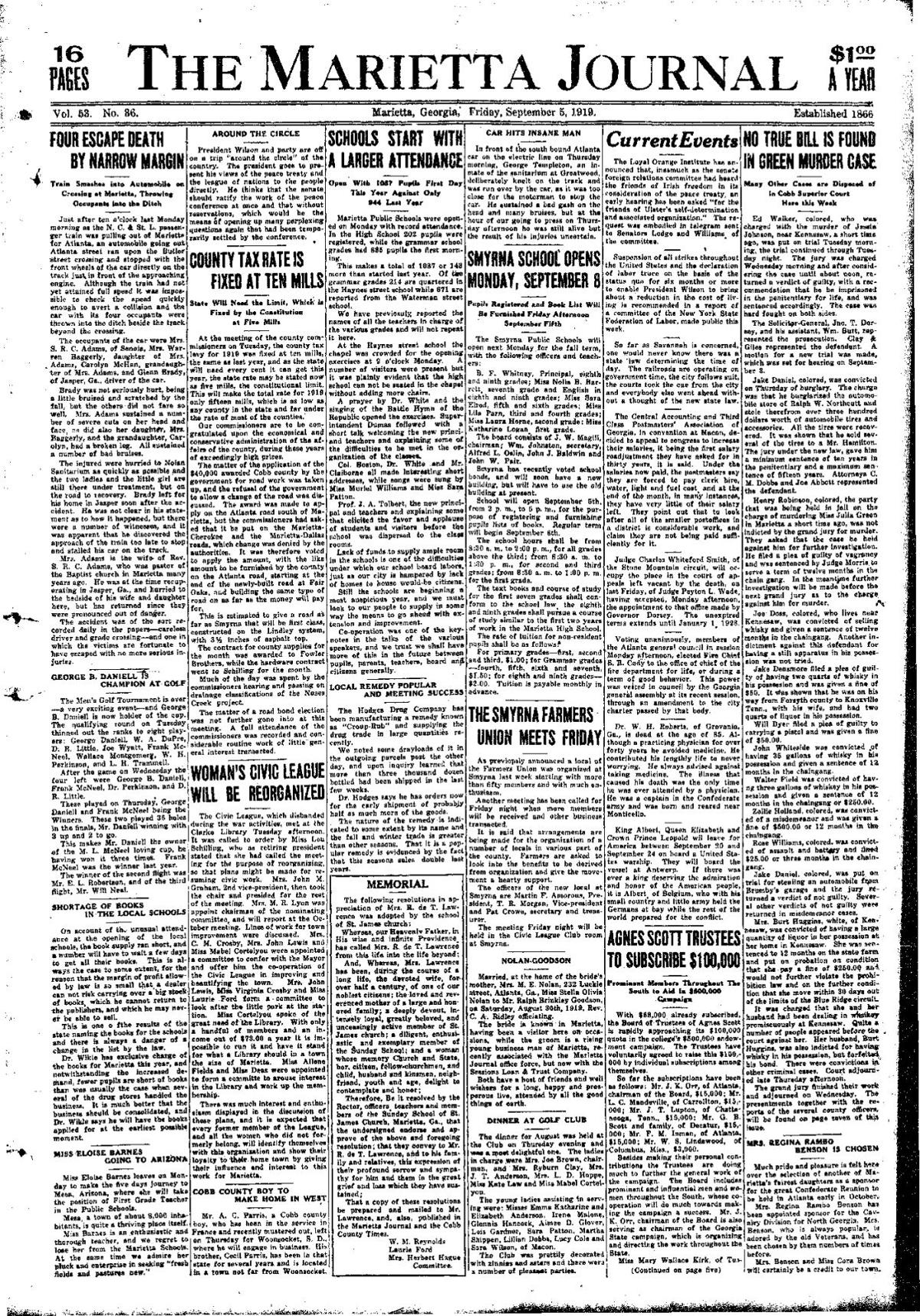 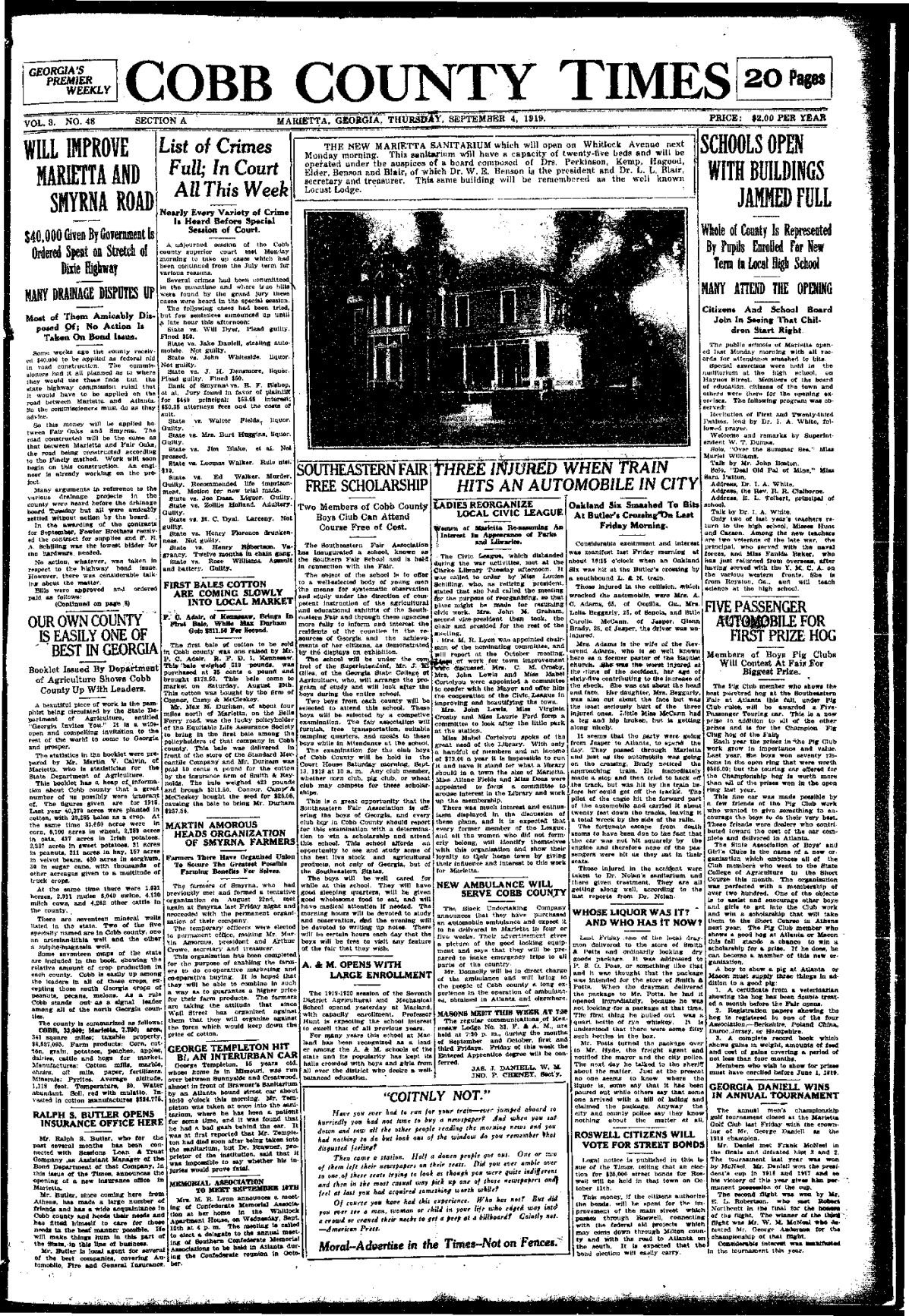 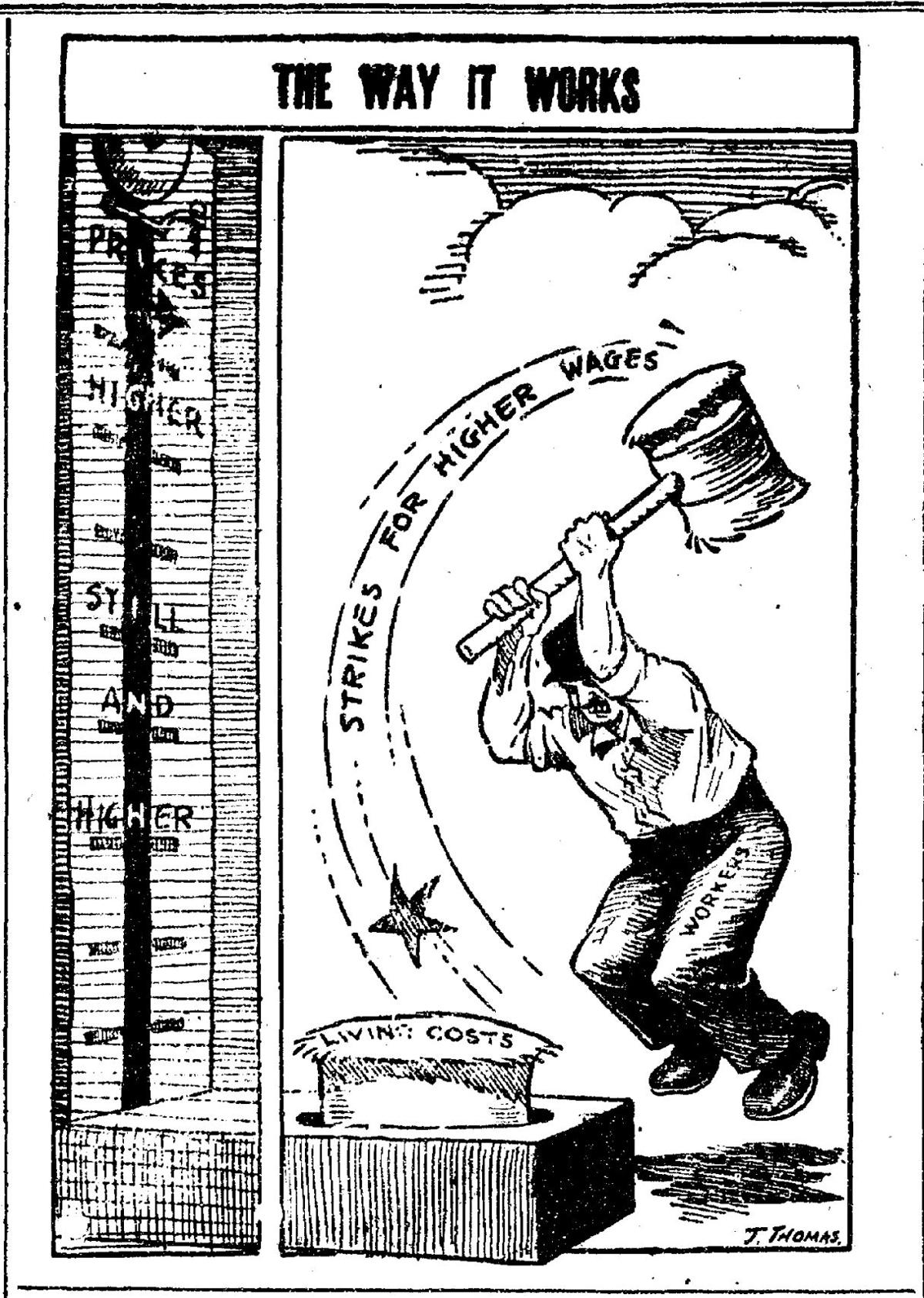 From the Thursday, Sept. 4, 1919, edition of The Cobb County Times. Pictured is an editorial cartoon showing how workers striking for higher wages was driving up living costs. 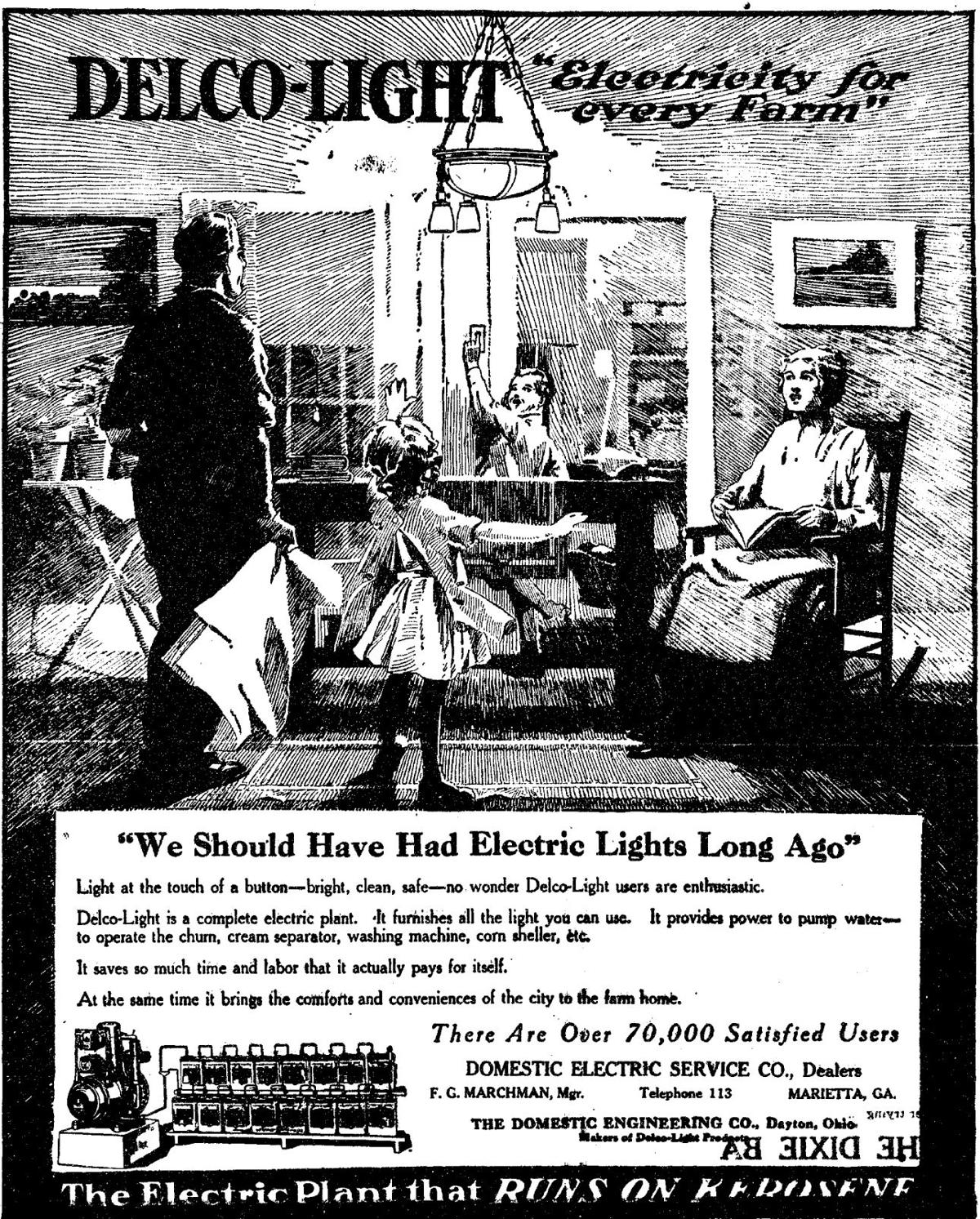 From the Thursday, Sept. 4, 1919, edition of The Cobb County Times. Pictured is an advertisement for Delco-Light being sold locally by Domestic Electric Service Co., managed by F.G. Marchman in Marietta. 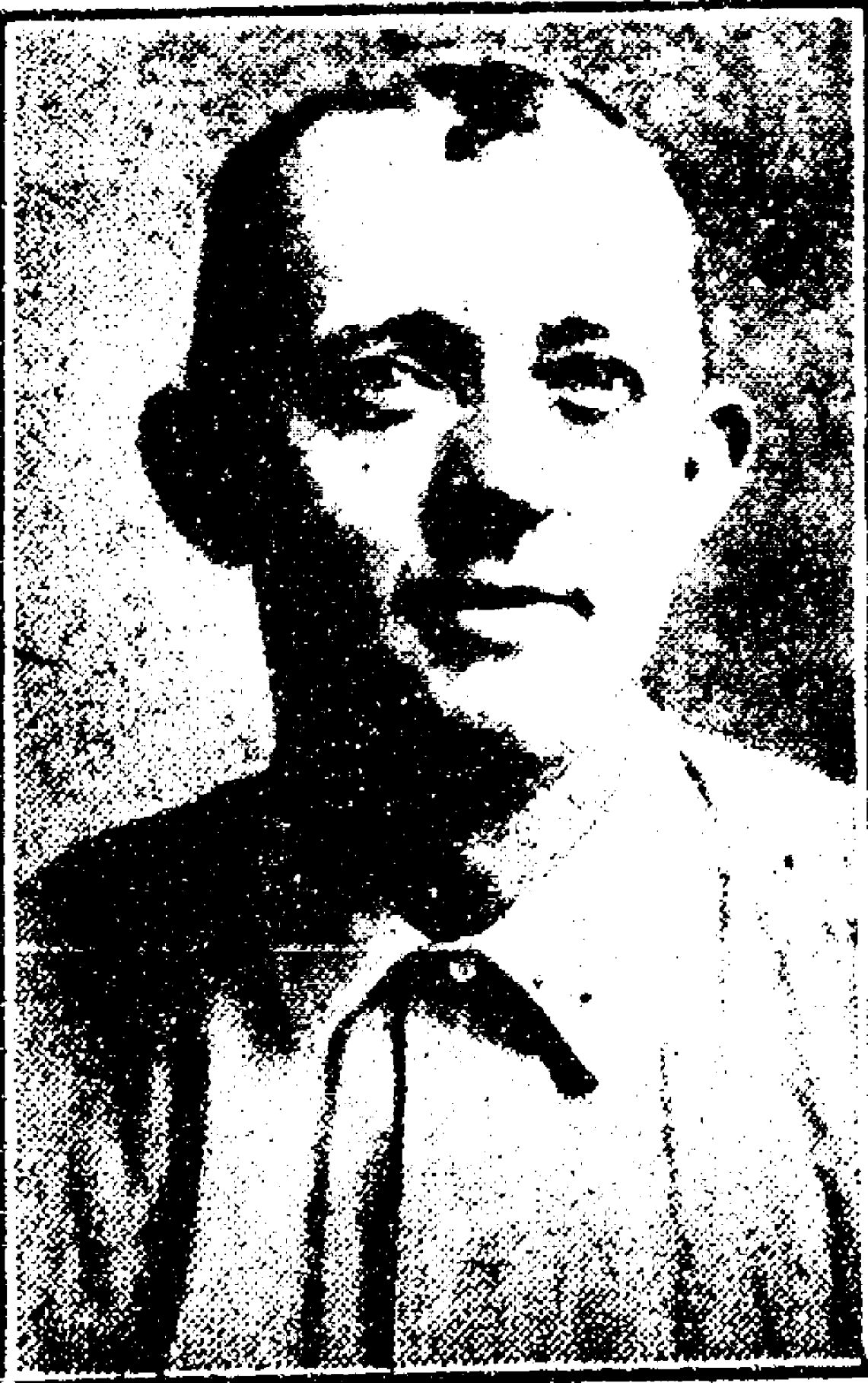 From the Thursday, Sept. 4, 1919, edition of The Cobb County Times. Pictured is Max M. Durham, who grew the first bale of cotton for 1919 and sold it for 50-cents a pound. It was bought by Smith & Reynolds, General Agents, Equitable Life Insurance Society.

From the Thursday, Sept. 4, 1919, edition of The Cobb County Times. Pictured is an editorial cartoon showing how workers striking for higher wages was driving up living costs.

From the Thursday, Sept. 4, 1919, edition of The Cobb County Times. Pictured is an advertisement for Delco-Light being sold locally by Domestic Electric Service Co., managed by F.G. Marchman in Marietta.

100 years ago …The Thursday, Sept. 4, 1919, edition of The Cobb County Times reported that the new Marietta sanitarium would open on Whitlock Avenue the following Monday morning. The sanitarium was to have a 25 bed capacity and would be operated under a board comprised of Drs. Perkinson, Kemp, Hagood, Elder, Benson and Blair. The building was formerly known to most residents as the Locust Lodge.

The Black Undertaking Company announced that they had purchased an automobile ambulance and expected delivery in 4-5 weeks.

An advertisement on Page 2 stated that the ambulance was “of the latest type, large and roomy, equipped with comfortable cots, so arranged that the patient will experience the least inconvenience and jar possible.” F.R. Donnelly was listed as being in charge of the ambulance’s operation and would take calls personally, day or night.

The Friday before, one of the local draymen delivered an unexpected package, addressed to a P.S.O. Poss, to the Smith & Potts store in Marietta. The drayman had assumed the package was intended for the store.

When Mr. Potts opened it, he found 50 bottles of rye whiskey. He turned the package over to the freight agent, Mr. Hyde, and notified the mayor and city police. When Sheriff W.E. Swanson came around, the liquor had mysteriously disappeared. Rumors around town said that it was poured out, while others were saying that someone with a bill of lading arrived and claimed the package.

The Friday, Sept. 5, 1919, edition of The Marietta Journal reported that a car was struck by a Nashville, Chattanooga and St. Louis Railway train just after 10 a.m. the Monday before at the Butler Street crossing in Marietta. While the train was not moving at full speed, the four occupants of the car were thrown into the ditch beside the track over the crossing.

Glenn Brady of Jasper, the driver of the car, suffered only bruises and scratches. Mrs. S.R.C. Adams of Senoia and her daughter, Mrs. Warren Baggerly, sustained severe cuts to their heads and faces. Mrs. Adams’ granddaughter, Carolyn McHan, suffered a broken leg.

Another front page story reported that an insane man, a patient at the Greatwood sanitarium, was run over after he knelt down in front of the oncoming south-bound Atlanta street car the Thursday before. The man survived the impact, suffering a bad gash on the head and many bruises.

Ed Walker, a black man who was charged with the murder of Jessie Johnson near Kennesaw, was put on trial the Tuesday before. The following day, the jury returned a verdict of guilty, with the recommendation that he be imprisoned for life.

Walker claimed that the shooting at Mt. Zion Church was accidental. He said that he pulled his pistol, intending to shoot straight up, in order to frighten off a group of women that objected to his marrying Johnson. Walker, who was being beaten with umbrellas and sticks at the time, said that he was bumped just as he fired and his shot ended up striking Johnson in the neck.

Henry Robinson, a black man charged with murdering Julia Green, was not indicted by the grand jury for the murder.

Green was found in her Waterman Street home in Marietta with a broken jaw from having her face and head beaten severely with a heavy instrument, which caused both eyes to swell shut. Before she died, Green stated that she was attacked in her sleep the night before. She claimed that she had chased away from her yard the day before an unknown black man.

The Hodges Drug Company on Marietta Square was reported as having manufactured a remedy known as “Croup-Rub” and was supplying it to “the drug trade in large quantities.” The Journal’s editors said that they had noticed “drayloads of it in the outgoing parcels post the other day, and upon inquiry learned that more than 3,000 dozen bottles had been shipped in the last few weeks.” Dr. Hodges said that he had orders for “probably half as much more of the goods.”

Mary Liza Walker, a black woman living on Maple Street in Marietta, was reported as having a “queer tomato vine” in her garden. The vine was said to have grown into a peach tree and was bearing fruit that resembled a peach in size, shape and color, but growing in clusters. One cluster on the vine held 13 of the tomatoes.

In the Wednesday, Sept. 3, 1969, Marietta Daily Journal it was reported that four people, three of them parents, were arrested following a demonstration that blocked buses in the McEachern School district for a short time that morning. The group was protesting the lack of bus service for the students “from Powder Springs to (the) McEachern School.” Police estimated the group to consist of about 10 parents and 40 students, ranging from elementary to high school ages.

Also that day, it was reported that Journal editor Carrol Dadisman was in Washington covering the Senate debate and vote on Sen. William Proxmire’s anti-C5 amendment. Proxmire’s amendment was to deny appropriations for the next 23 C5s and end the program after the production of the first 58 planes, which were already under contract.