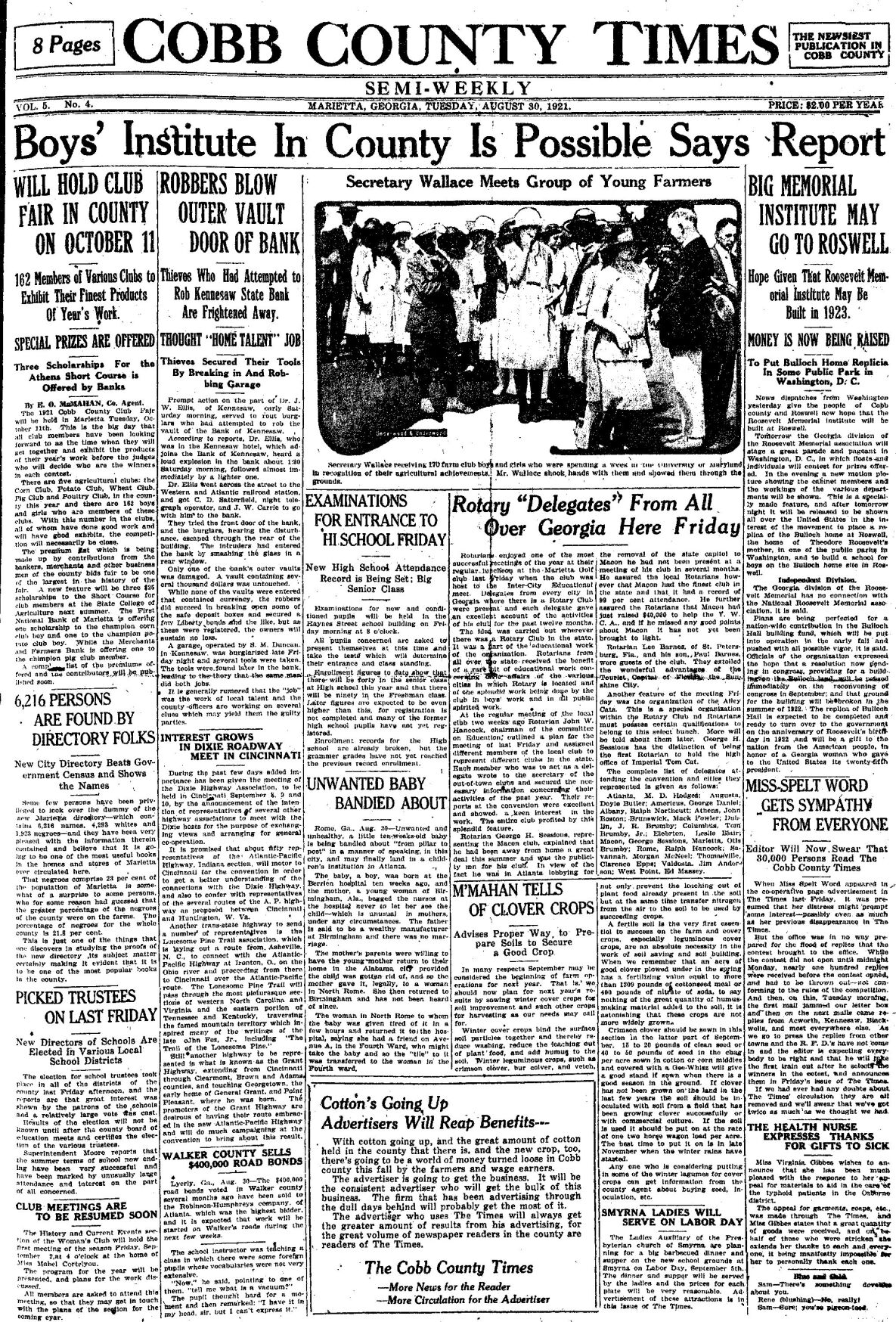 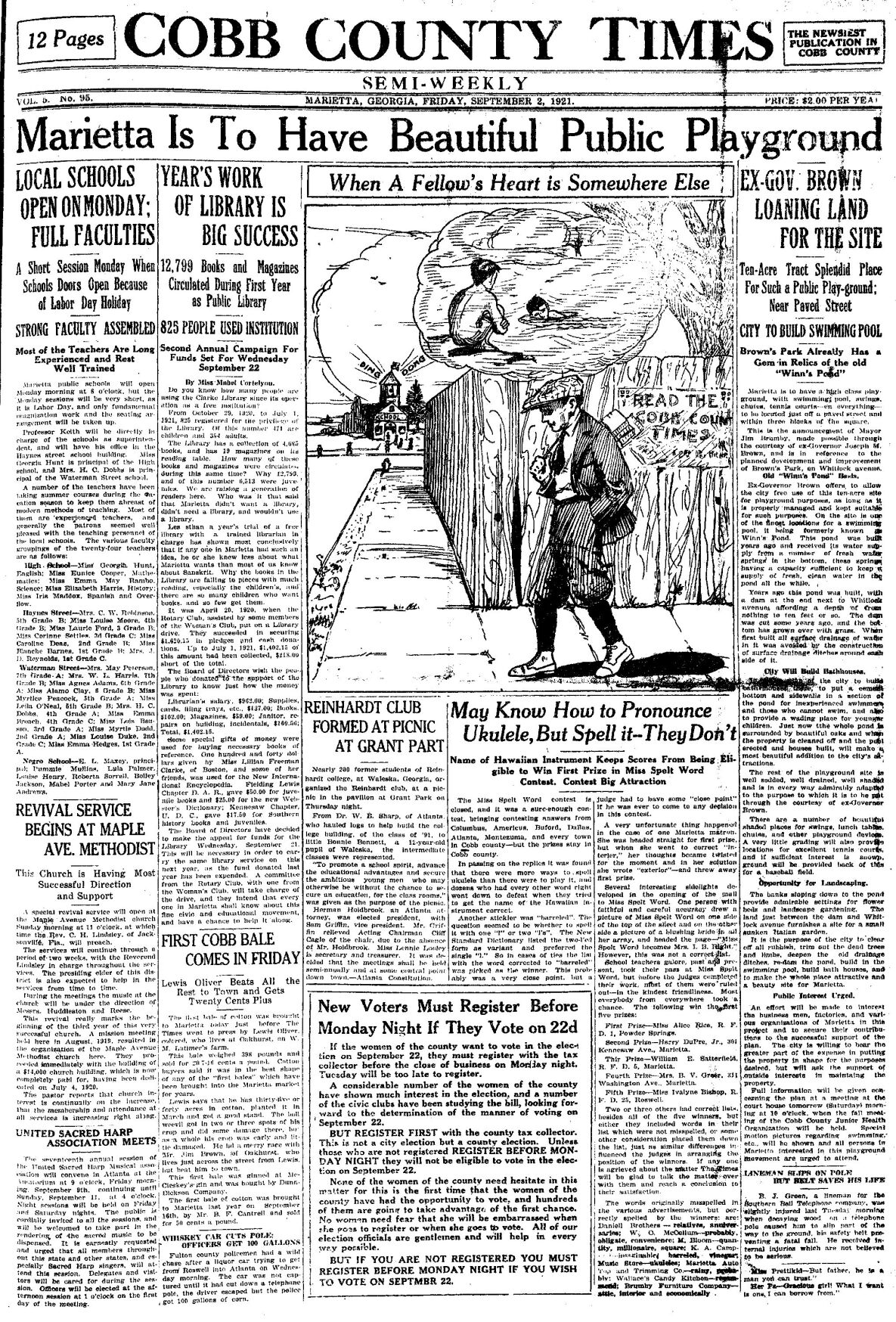 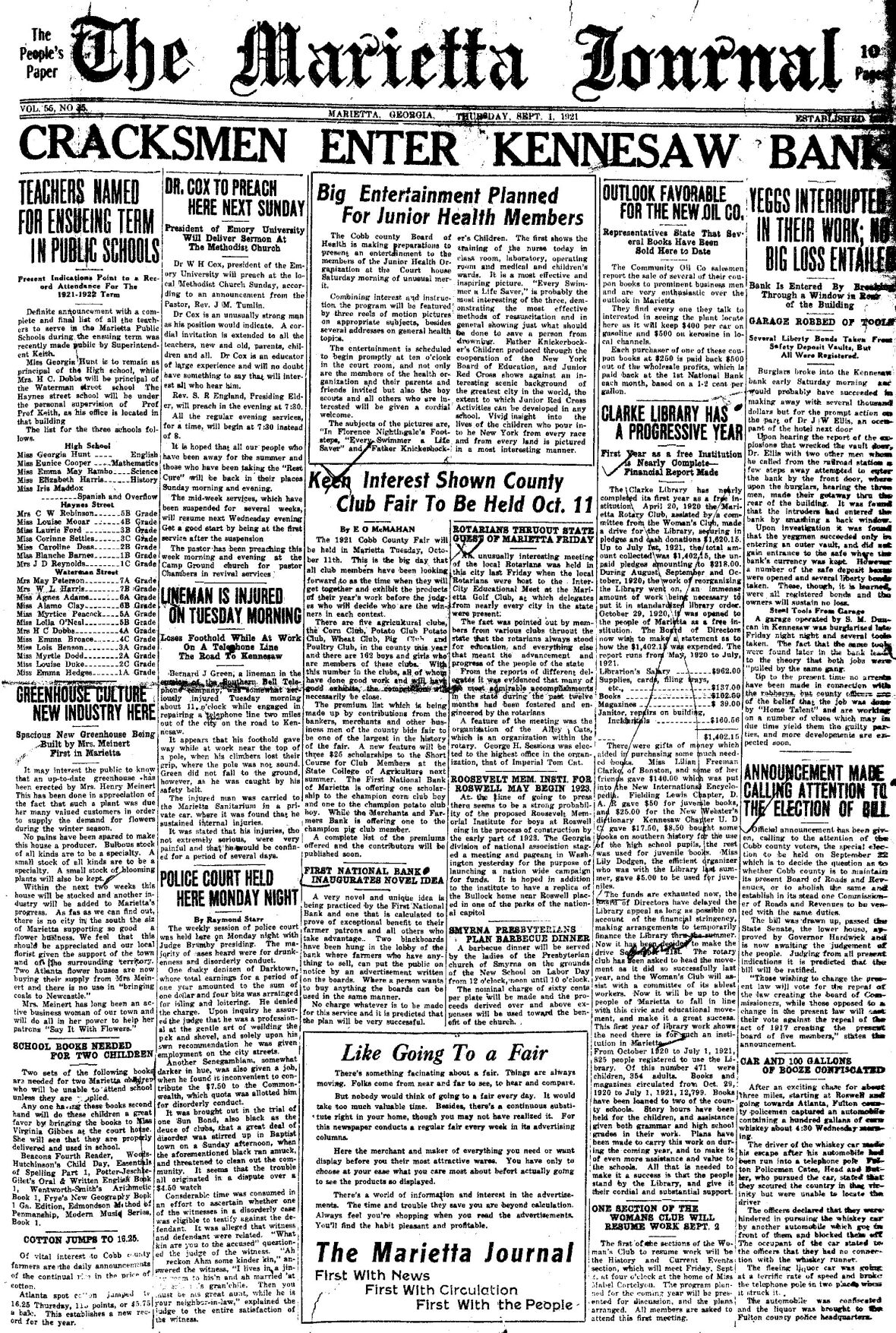 The Tuesday, Aug. 30, 1921, edition of The Cobb County Times reported that the prompt action of Dr. J.W. Ellis of Kennesaw the Saturday before stopped the burglars attempting to rob the vault of the Bank of Kennesaw.

Dr. Ellis, who was staying in the Kennesaw Hotel next door to the bank, heard a loud explosion in the financial institution around 1:30 a.m. that was followed by a second, smaller explosion. He went across the street to the Western & Atlantic Railroad station, got the night telegraph operator C.D. Satterfield and J.W. Carrie to return with him to the bank.

Upon trying the front doors, the burglars escaped out the rear. Only one of the bank’s outer vaults had been damaged. The vault containing several thousand dollars was untouched.

Tools stolen in the Friday night burglary of S.M. Duncan’s Kennesaw garage were found inside the bank.

A syndicated story out of Rome on the front page reported that an unwanted and unhealthy, 10-week-old baby boy was being “bandied about ‘from pillar to post’” and was expected to end up in an Atlanta children’s institution.

The boy, born at the Berrien hospital to a young unwed mother from Birmingham, Alabama, begged the nurses at the hospital to never let her see the child under any circumstances. The mother’s parents were said to be allowing their daughter to return to their home as long as “the child was gotten rid of.”

The mother legally gave up the child to a North Rome woman, but she grew “tired of it in a few hours and returned it to the hospital.”

The Sept. 2, 1921, edition of The Cobb County Times reported that Marietta was to have “a high class playground, with swimming pool, swings, chutes, tennis courts and everything” just off a paved street within three blocks of Marietta Square.

The announcement was made by Marietta Mayor Jim Brumby. The 10-acre tract of land was being donated by former Gov. Joseph M. Brown “as long as it is properly managed and kept suitable for such purposes.”

The property contained Winn’s Pond, which was built years ago and received its water from a number of fresh water springs at its bottom.

Fulton County police were reported as having a wild chase after a liquor car trying to get from Roswell into Atlanta the Wednesday before. The car was captured after it knocked down a telephone pole. While the driver escaped, 100 gallons of corn liquor were captured.

B.J. Green, a lineman for the Southern Bell Telephone company, was reported as being slightly injured the Tuesday before when decaying wood on a telephone pole caused him to slip “part of the way to the ground.” Green, who was saved from a fatal fall by his safety belt, suffered non-serious internal injuries.

In the “News From Our Correspondents” column, the Kennesaw section reported that H.B. Bozeman went to feed his mules one morning the week before and discovered an escaped convict hiding in the back of the barn. Bozeman arrested the man and called the police. The fellow had escaped from the camps near Acworth.

The Sept. 1, 1921, edition of The Marietta Journal reported in the Sand Town Road section of the “News From Our Correspondents” column, that Nelle Boring and Pauline Gentry “had the misfortune to get poisoned on thunderwood during play hour at school” the week before. Nelle was so seriously poisoned that a doctor was called.

The Friday, Aug. 30, 1946, edition of The Marietta Journal reported that specialists at Walter Reed Hospital in Washington decided not to operate on Marietta’s Nancy Ruth Griner, 3, who was suffering a critical brain condition.

The child was rushed via C-47 to Washington from the Marietta air field on July 26, 1946, after Atlanta doctors decided an immediate operation was necessary. Since the age of three weeks, Nancy had suffered a clot on the brain that resulted in spastic paralysis. After a month of constant observation, doctors decided it was too late to operate and would focus their efforts on trying to teach her to walk and talk.

Marietta Policeman Paul West was reported in the Tuesday, Sept. 3, 1946, paper as having raced with death and won by seconds.

Lamar Prather, the 3-year-old son of J.B. Prather of Davis Lake Drive, was brought to the Marietta Hospital the day before. Lamar was thought to be strangling from an object in his throat, but doctors discovered his left lung had collapsed. The hospital did not have the right instruments and the child was growing weaker by the moment.

West, Fireman Pierce McCurely, the unconscious boy and his parents left the hospital in a patrol car and 16 minutes later were at the Ponce de Leon Infirmary in Atlanta.

West summed up the trip saying not a word was spoken the entire ride. Upon arrival a doctor and nurse took the child before the car had stopped. The quick action saved Lamar’s life, but doctors said that if they had arrived just two minutes later then he would have died.