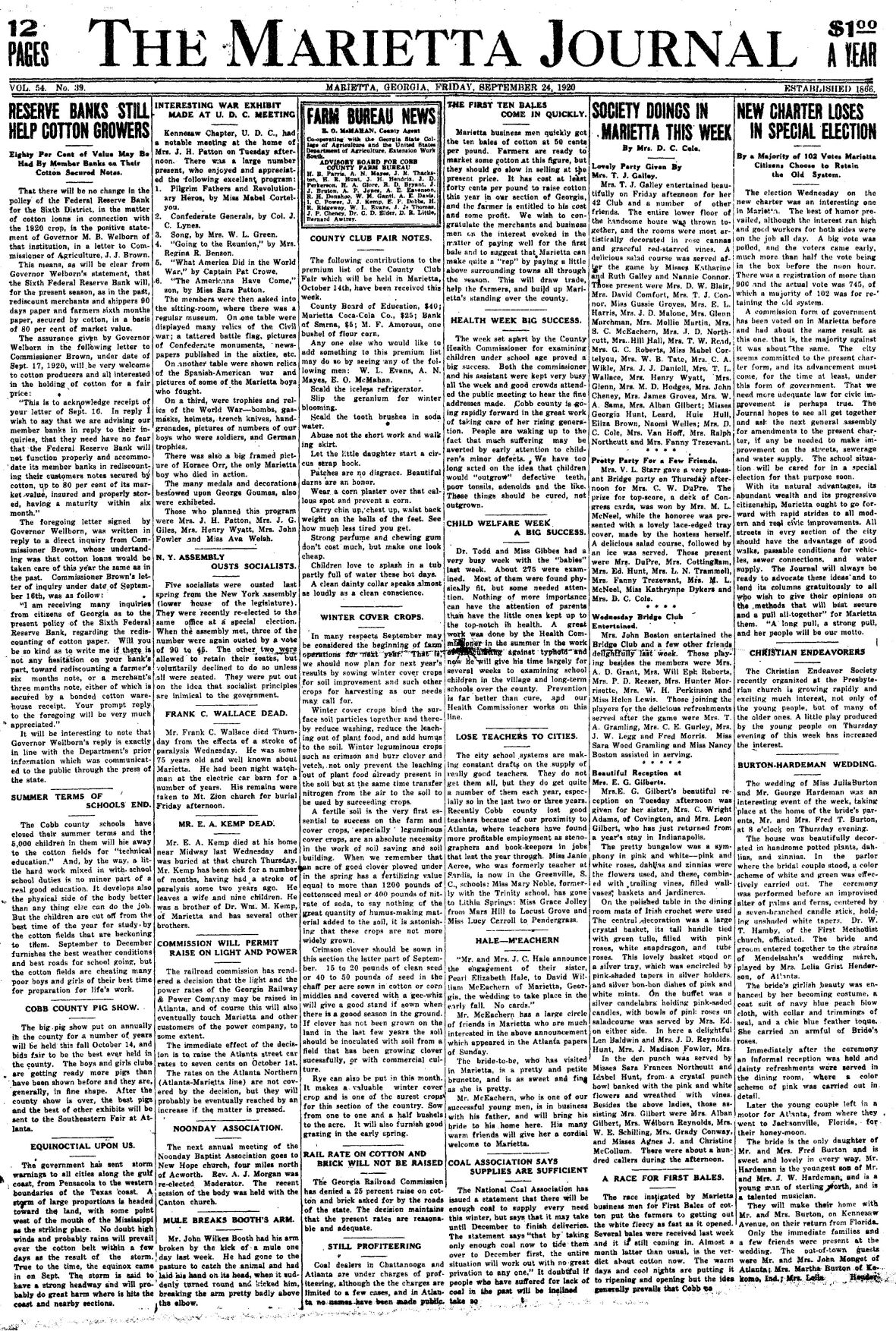 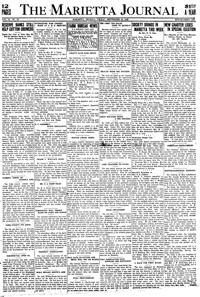 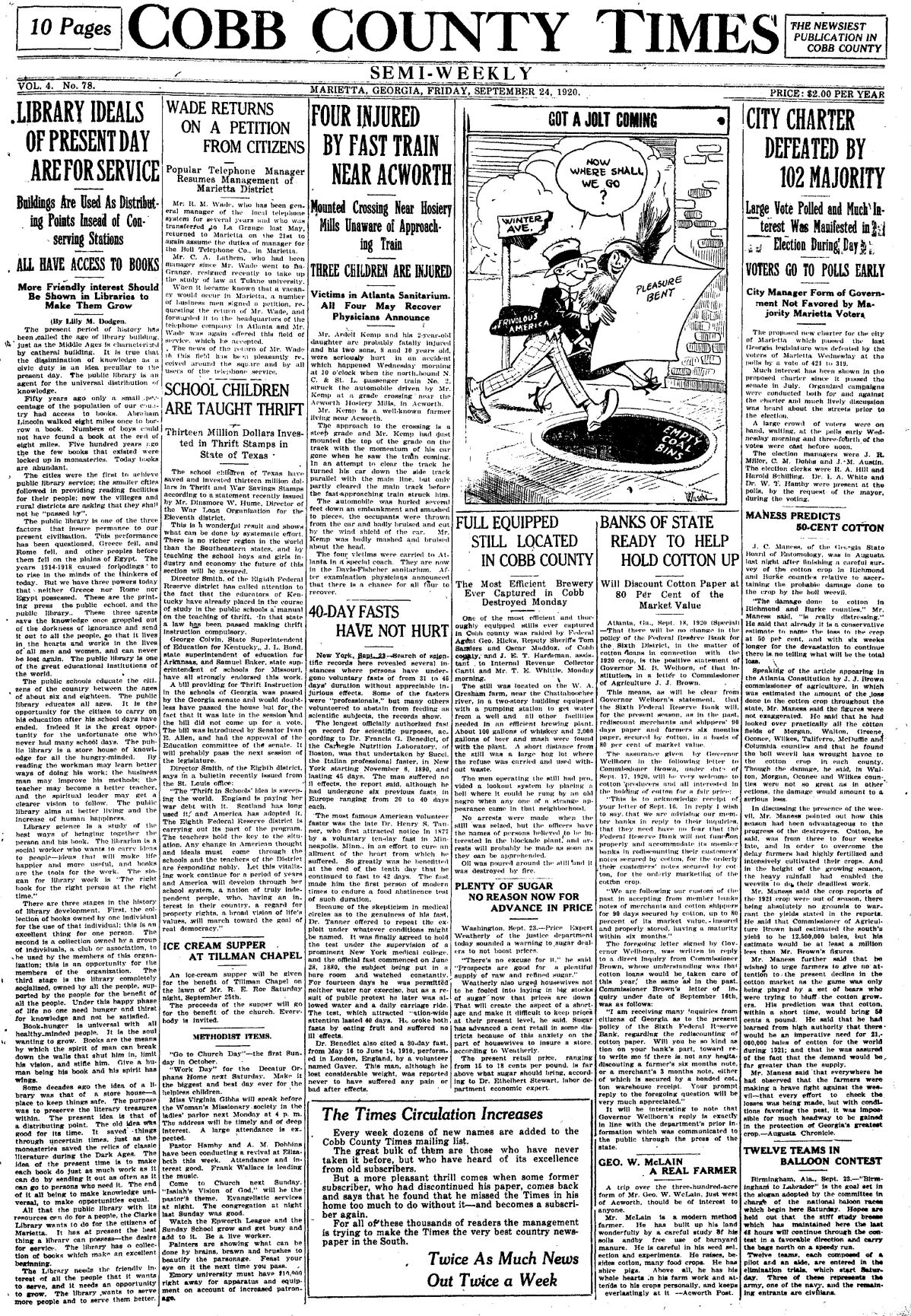 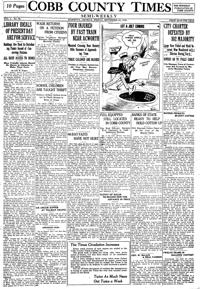 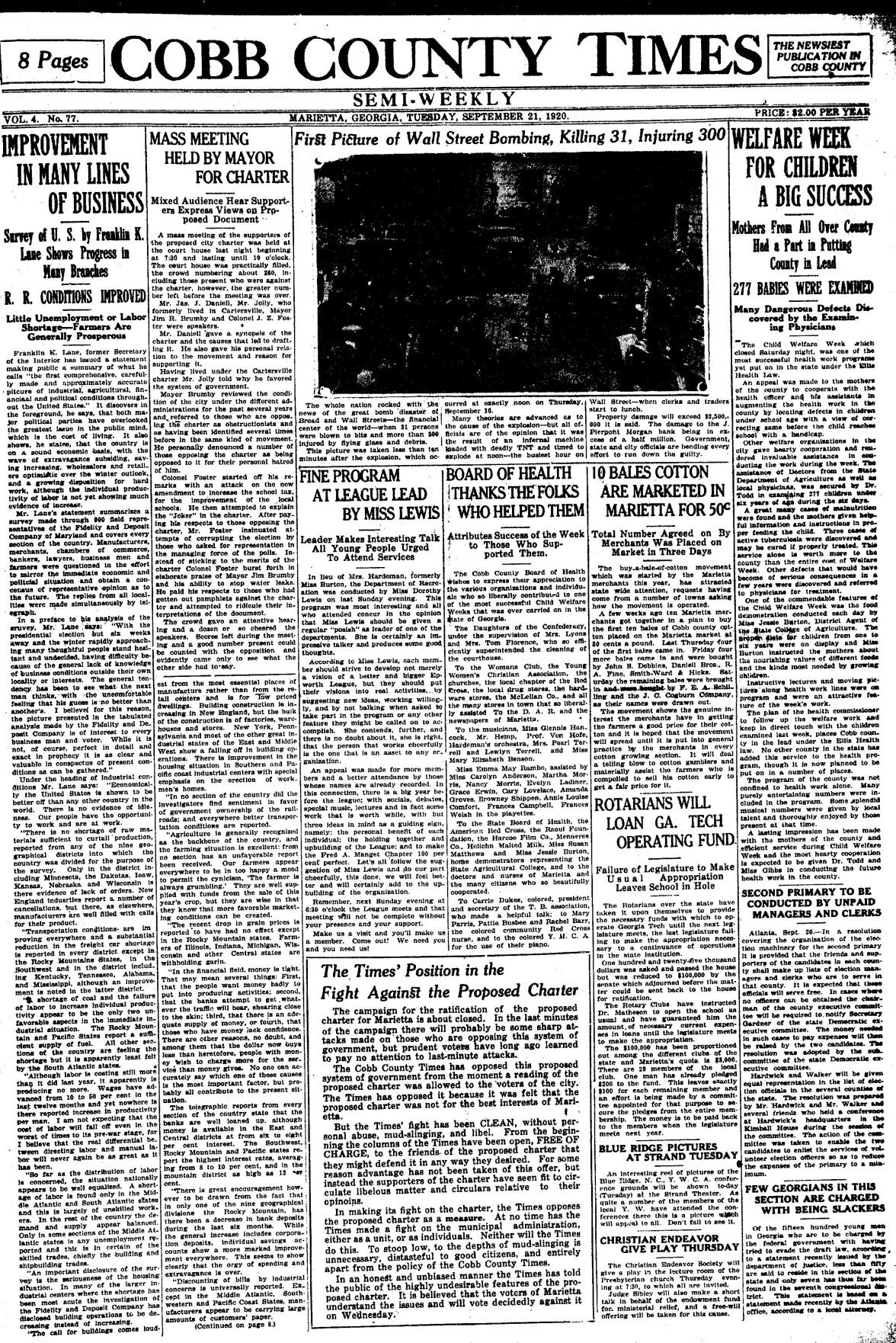 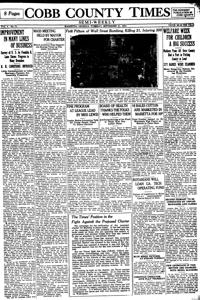 In the Tuesday, Sept. 21, 1920, edition of The Cobb County Times, the editors picked up an article about “the bombing of Broad and Wall Streets — the financial center of the world” where 31 people were killed and 300 were injured on Thursday, Sept. 16, 1920. The bomb was believed to have been a device packed with TNT and timed to explode at noon when the clerks and traders were heading to lunch. At the time, the culprit was still being sought.

The Friday, Sept. 24, 1920, edition of The Cobb County Times reported that Ardell Kemp and his 2-year-old daughter were expected to die from injuries sustained in a car-train accident the Wednesday before. Kemp’s two sons, 8 and 10 years old, were also seriously hurt.

At 10 a.m., the fast moving northbound Nashville, Chattanooga and St. Louis Railway passenger train No. 2 struck Kemp’s automobile just after he climbed up the steep grade at the crossing near the Acworth Hosiery Mills.

The Friday, Sept. 24, 1920, edition of The Marietta Daily Journal reported that several artifacts were on display at the Kennesaw Chapter of the United Daughters of the Confederacy meeting in the home of Mrs. J.H. Patton the Tuesday before.

In the sitting room were:

♦A table displaying several Civil War relics including a tattered battle flag, pictures of Confederate monuments and newspapers that were published in the 1860s.

♦A second table with Spanish-American War relics that included photographs of Marietta men who had fought in the conflict.

♦A third table with trophies and relics from World War I that included bombs, gasmasks, helmets, trench knives and hand grenades. There were also pictures of local men who fought, including a large framed picture of Sgt. Horace Orr of Marietta who died in battle in France and was Cobb County’s first WWI casualty.

In the Friday, Sept. 21, 1945, edition of The Marietta Journal it was reported that Pvt. Hubert C. Pruitt, a member of the 350th Infantry of the 88th Division, was killed on his 33rd birthday in Italy. Pruitt died on Aug. 9, 1945, from “accidentally inflicted gunshot wounds” that were “fired by one of his own companions.”

♦Staff Sgt. Edward C. Wigley of Marietta and Staff Sgt. Harold W. Scott of Smyrna were revealed by the War Department as radar operators in the 58th Bombardment Wing and among the “unsung heroes” that played an important role in the Superfortress blitz on Japan.

“The B-29 was the first plane to carry a radar operator as a regular member of every crew and although these men received little recognition during the war because of the ‘security blackout’ on their activities, they largely contributed to the outstanding record of bombing accuracy established by Brig. Gen. Roger M. Ramey’s pioneer Superfortress unit.”

♦Bees were reported as taking over a large part of the street and sidewalk in front of McLellan’s Store on Marietta Square the day before. Several people were harassed and stung after stepping off the curb into what was described as “the middle of the flying ‘TNT.’”

An unknown person had dropped ice cream in the gutter which attracted the half-a-foot-deep pile of bees.