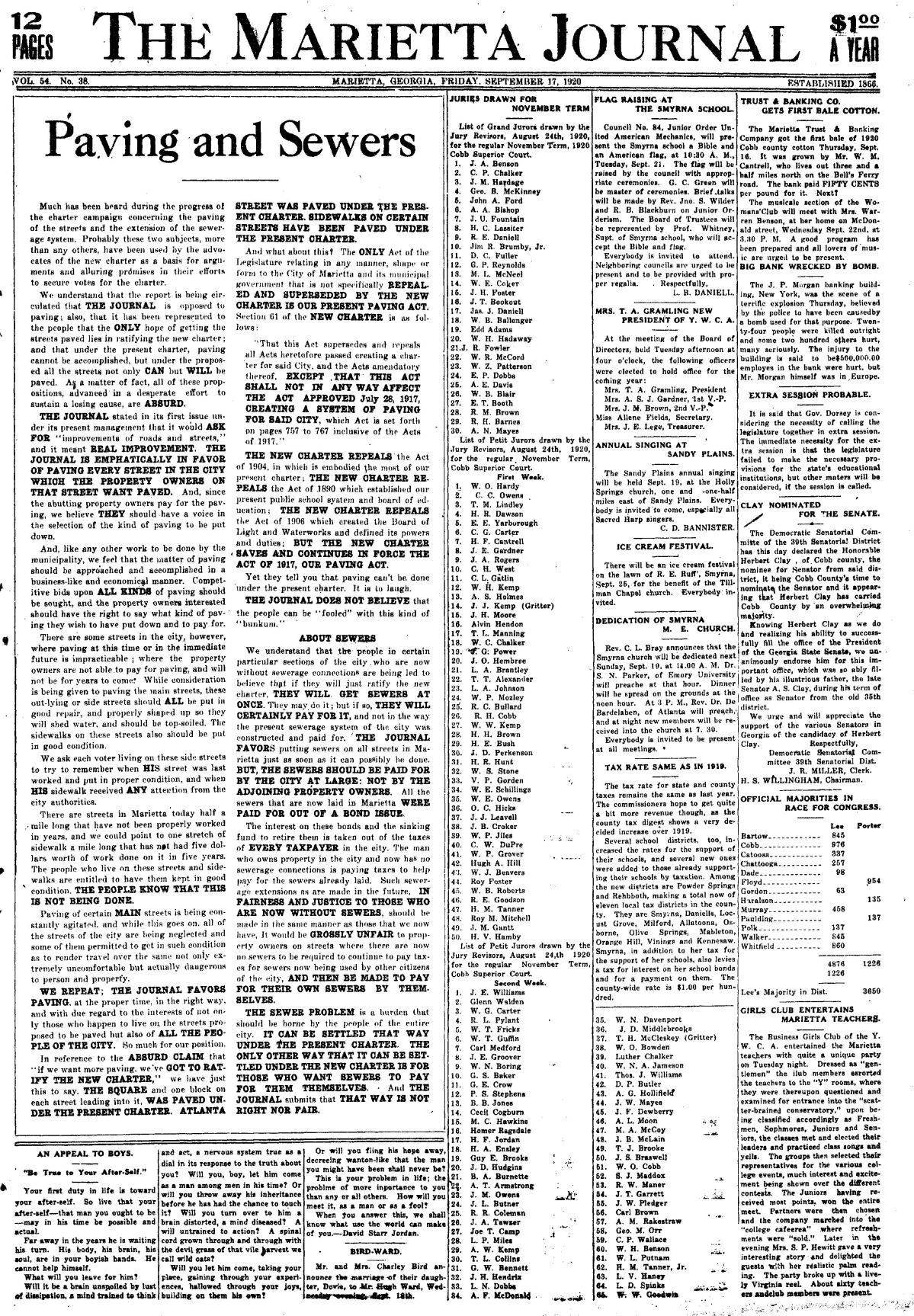 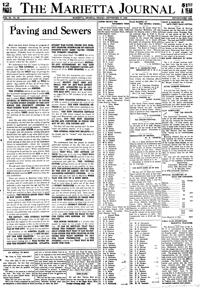 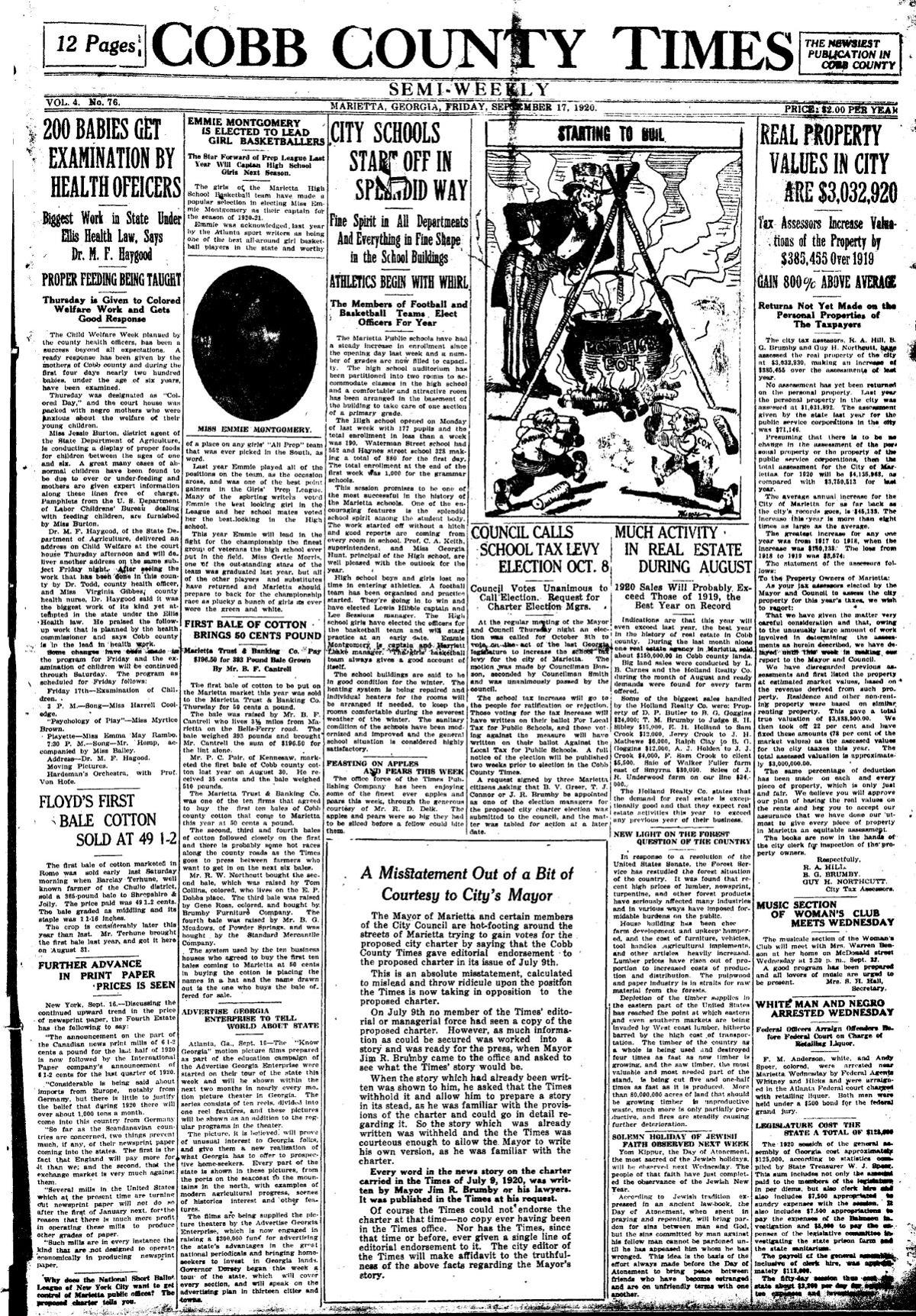 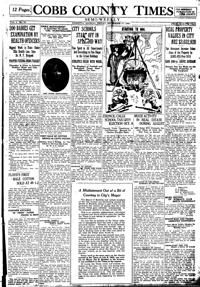 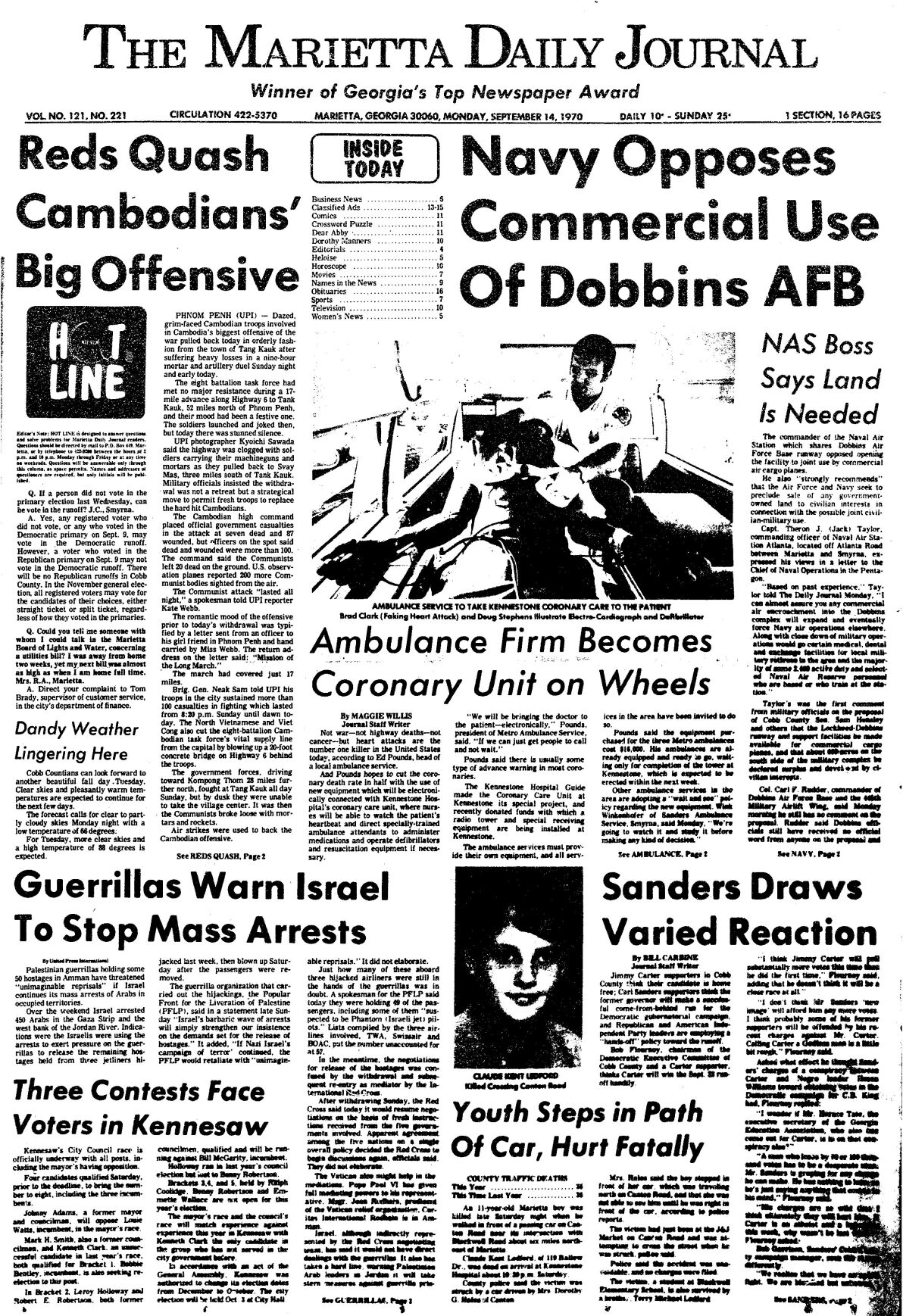 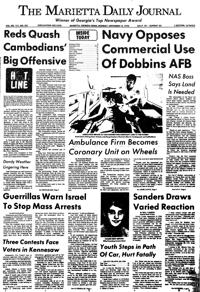 The Tuesday, Sept. 14, 1920, edition of The Cobb County Times reported that Elizabeth McFall, 6, daughter of former Marietta resident B.W. McFall, was instantly killed the day before in front of the family home on DeKalb Avenue in Atlanta when she was hit by a speeding truck. Elizabeth, whose father was an engineer with the Knoxville division of the Louisville and Nashville Railroad, was just returning home from her first day of school.

The Friday, Sept. 17, 1920, edition of The Cobb County Times reported that F.M. Anderson and Andy Speer were arrested near Marietta the Wednesday before by Federal agents. The two men were later arraigned in the Atlanta Federal court on charges of selling liquor in violation of the Prohibition laws.

In the Friday, Sept. 17, 1920, edition of The Marietta Daily Journal, the editors ran across half of the front page an article stating the paper’s position regarding the paving of streets and the extension of the sewer system during Marietta’s charter campaign.

In the “News From Our Correspondents” column, the Olive Springs section reported that former resident A.T. Wise was hit and knocked down by a truck while he was getting out of a street car at Marietta and Latimore Streets in Atlanta the Friday before. He was rushed to Grady Hospital and later sent home.

Farmerette, the Sandy Plains correspondent, wrote about several injuries and accidents that happened in her section:

♦Frank Allen was hit in the right eye with a baseball bat that slipped out of the grip of Riley Queen’s hands.

♦Jess Ayres suffered two accidents. His mule ran away with him one day, throwing him down and bruising him badly. Later he was kicked out of the stable door by the same mule.

♦Little Lucile Banister fell against the stove the Saturday before and burned her throat badly.

The Wednesday, Sept. 12, 1945, edition of The Marietta Daily Journal reported that vandals broke into the Keith Grammar School on Haynes Street in Marietta the Monday before and ransacked several rooms. The greatest damage was from the vandals, who entered the building through the downstairs cafeteria, by pouring ink on the tops of several new desks.

Capt. Eddie Rickenbacker was reported in the Friday, Sept. 13, 1945, paper as planning to expand Eastern Air Lines and had chosen Marietta as the principal airport of the Southeast.

Rickenbacker, speaking of the field that bore his name, said Marietta was 30 minutes closer than the Atlanta municipal airport and was not subject to the dangerous smoke hazards that obscured the Atlanta field several days of the year. The Marietta field also had three runways of 6,000 feet each, which were long enough for the huge new twin-engine Commando transports and four-engine transports that Rickenbacker’s company was buying.

The Friday, Sept. 11, 1970, paper reported that Smyrna police had two men in custody on several charges that afternoon after a wild chase during which police officers and the “professional” suspects exchanged numerous rounds of gunfire.

The action began at 3:24 a.m. when a Smyrna officer on routine patrol saw a “suspicious” car parked at the King William office building on Atlanta Street. As Patrolman Melvin Jamerson pulled up, two men jumped into the car, which pulled off at high speed. The chase went through several Smyrna streets, with the two men in the rear seat firing on the police car several times.

The third suspect was still being sought that afternoon. The two captured suspects were surprised by Jamerson’s arrival before they were able to enter the office building.

Capt. Theron J. “Jack” Taylor, commanding officer of Naval Air Station Atlanta, was reported in the Monday, Sept. 14, 1970, paper as being opposed to opening the facility to joint use by commercial air cargo planes. He also “strongly recommended” that the Air Force and Navy seek to preclude sale of any government-owned land to civilian interests in connection with the possible joint civilian-military use.