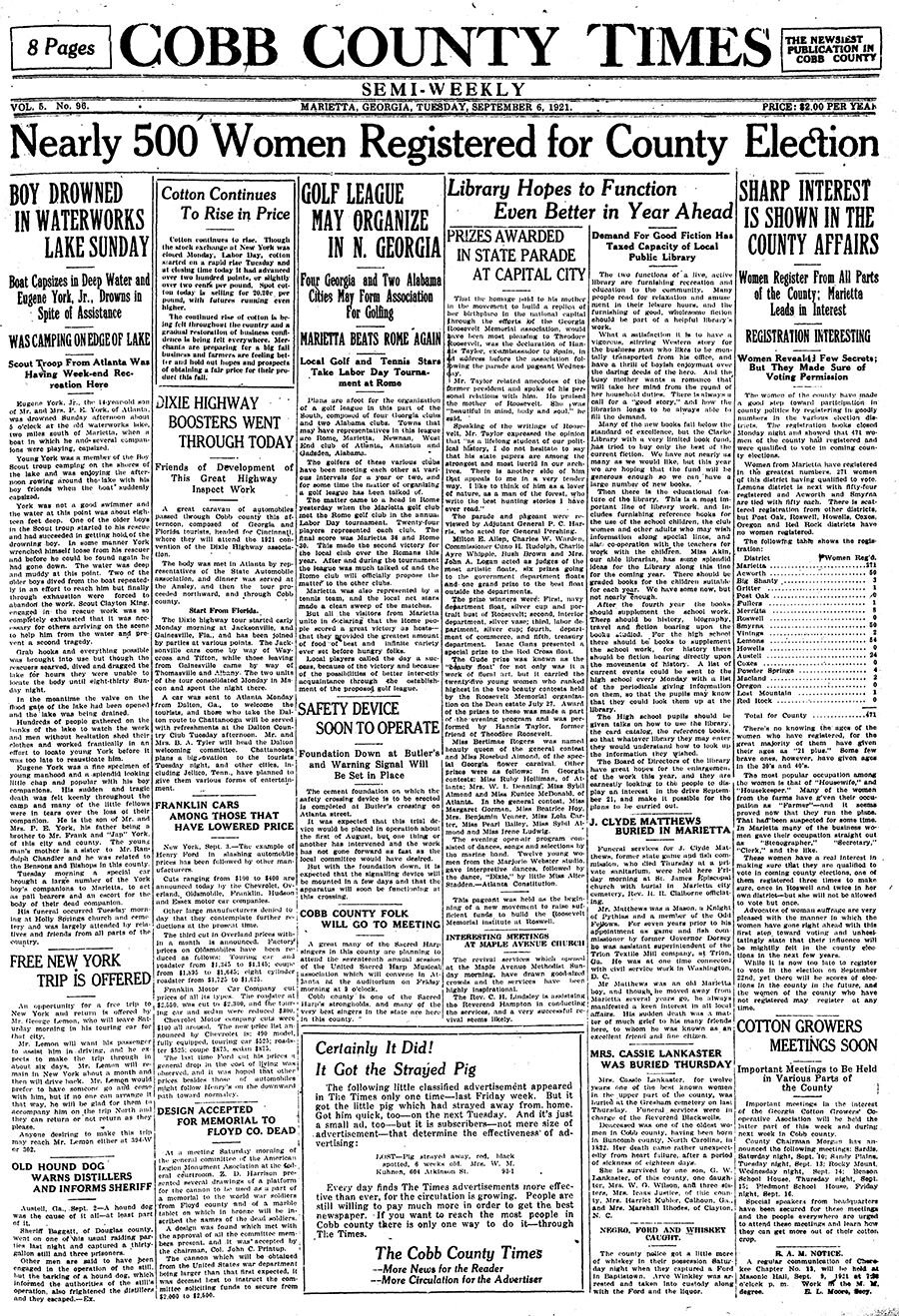 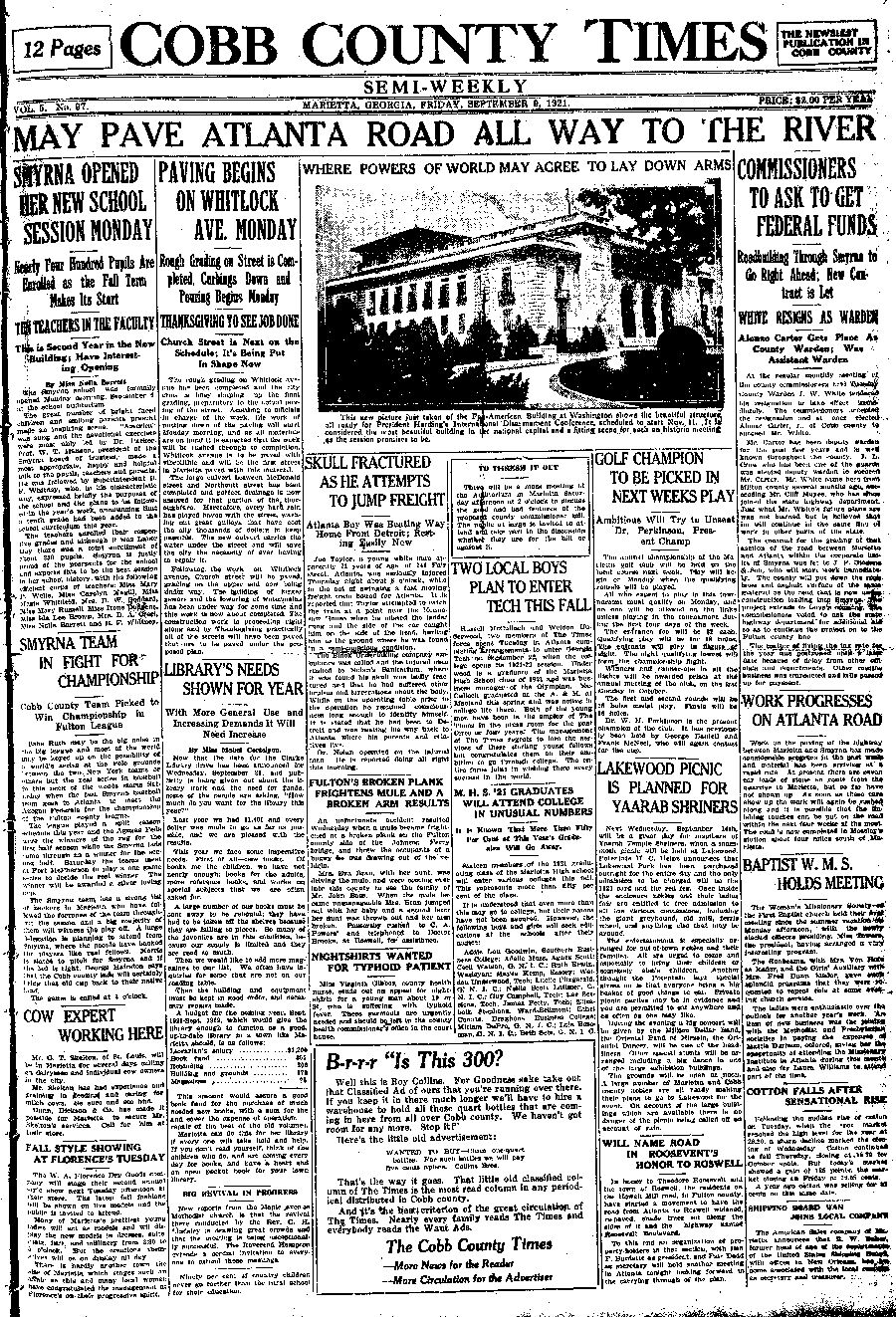 The Tuesday, Sept. 6, 1921, edition of The Cobb County Times reported that Cobb County women made a good step toward participation in county politics with 471 of them registering the night before to vote in the coming elections.

Marietta women registered in the greatest numbers with 271. The Lemons District was next with 54, while Acworth and Smyrna tied with 50 each. The Post Oak, Roswell, Howells, Coxes, Oregon and Red Rock districts showed zero women having registered.

Women had just gained the right to vote when the 19th Amendment to the U.S. Constitution was ratified on Aug. 18, 1920.

Eugene York Jr., the 14-year-old son of P.E. York of Atlanta, drowned the Sunday before around 5 p.m. at the old waterworks lake, two miles south of Marietta, when the boat that he and several companions were rowing capsized. York, who wasn’t a strong swimmer, was a member of a Boy Scout troop camping on the shores of the lake.

One of the older boys went to his rescue and got a hold on York, but the drowning boy wrenched loose and went under again. At the point where he went under was 18 feet deep and had become muddy. Two of the older boys dove repeatedly from the boat to try to find York, but reached a point of exhaustion and had to abandon the search.

Scout Clayton King was reported as being so tired that others on scene had to help him out of the water in order to prevent a second tragedy.

Douglas County Sheriff Baggett was reported as raiding a still near Austell on Sept. 2, 1921 and captured a 30-gallon still and three prisoners. There were other men operating the still, but the barking hound dog that led the authorities to the site caused the other distillers to flee.

The Sept. 9, 1921, edition of The Cobb County Times reported that Joe Taylor, 21, of Atlanta was seriously injured at 8 p.m. the night before while trying to swing aboard a fast moving freight train bound for Atlanta.

Taylor attempted to catch the train near the Kennesaw House in Marietta and missed the ladder rung. The side of the train car struck his head and hurled him to the ground. The Black Undertaking Company ambulance was called and Taylor was rushed to Nolan’s Sanitarium, where he was diagnosed with a badly fractured skull.

An accident occurred the Wednesday before when a mule became frightened of a broken plank on the Fulton County side of the Johnson Ferry Bridge.

Mrs. Eva Bran, with her aunt, were driving the mule on a trip to see some family in Cobb. When the animal became unmanageable, Mrs. Bran jumped out of the buggy with her baby. A second later, the animal caused her aunt to be thrown out, breaking her arm.

In the “News From Our Correspondents” column, the Powder Springs section reported that Mr. and Mrs. Gresham of Mableton had motored to visit their sister Mrs. C.A. Rice the Friday before. Just before they crossed the Seaboard Railroad on Lost Mountain Road, their car ran off the embankment and turned over. The crash was the result of attempting to avoid running over a dog. Both were reported as being badly wounded.

The Marietta Elks Lodge on Waverly Way was reported in the Sunday, Sept. 8, 1946, paper as being closed by Elks officials the day before, after the lodge manager was arrested following a 1:45 a.m. raid by city police on a drinking party and poker game. Also arrested were five men and two women.

Four city police officers, led by Night Chief Byron Wallace, entered the lodge after receiving numerous complaints from neighbors that they were unable to sleep because of loud, obnoxious language coming from the lodge.

Pigeons were reported as circling Marietta Square at intervals of every 10 minutes in the Monday, Sept. 10, 1946, paper. These were not the ghosts of the pigeons shot at the Marietta courthouse the week before, but racing pigeons belonging to J.D. Corley of Atlanta.

In the Tuesday, Sept. 7, 1971, paper it was reported that old-timers watched with sadness as the demolition of the Keith School got underway the week before. The school, formerly known as the Haynes Street School, was built in 1913 for $26,000. It was going to be replaced by a nine-story high-rise that cost $1.3 million and would contain 102 apartments.

Also that day, it was reported that W. Paul Sprayberry, 71, who served as superintendent of the Cobb County School District for 16 years, died at Kennestone Hospital the Sunday before from a heart attack.

Sprayberry was known “for his ability to secure federal money for the school system, and construction activity mushroomed in his years to meet the needs of the growing county.” Sprayberry High School was named for him in 1953.