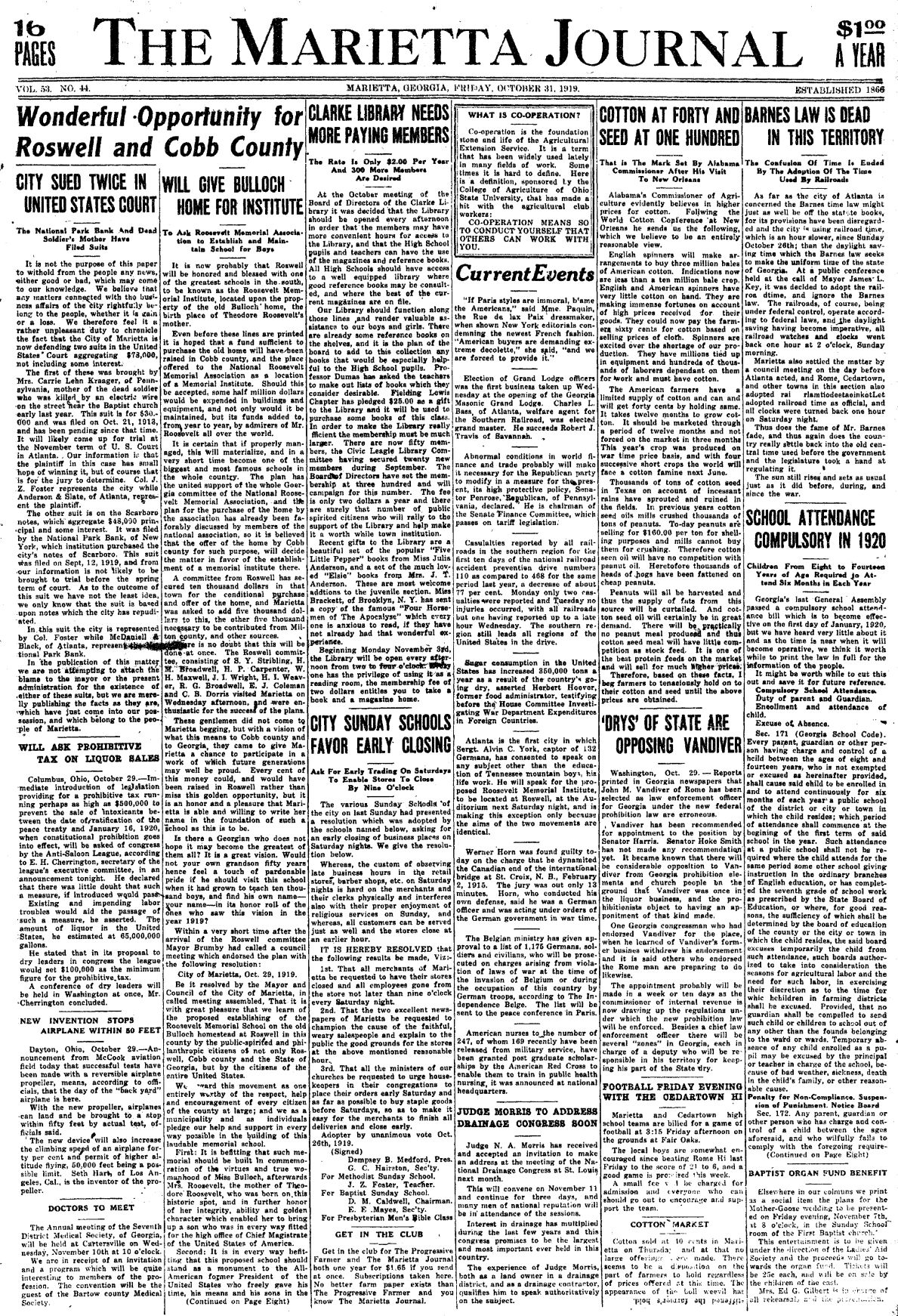 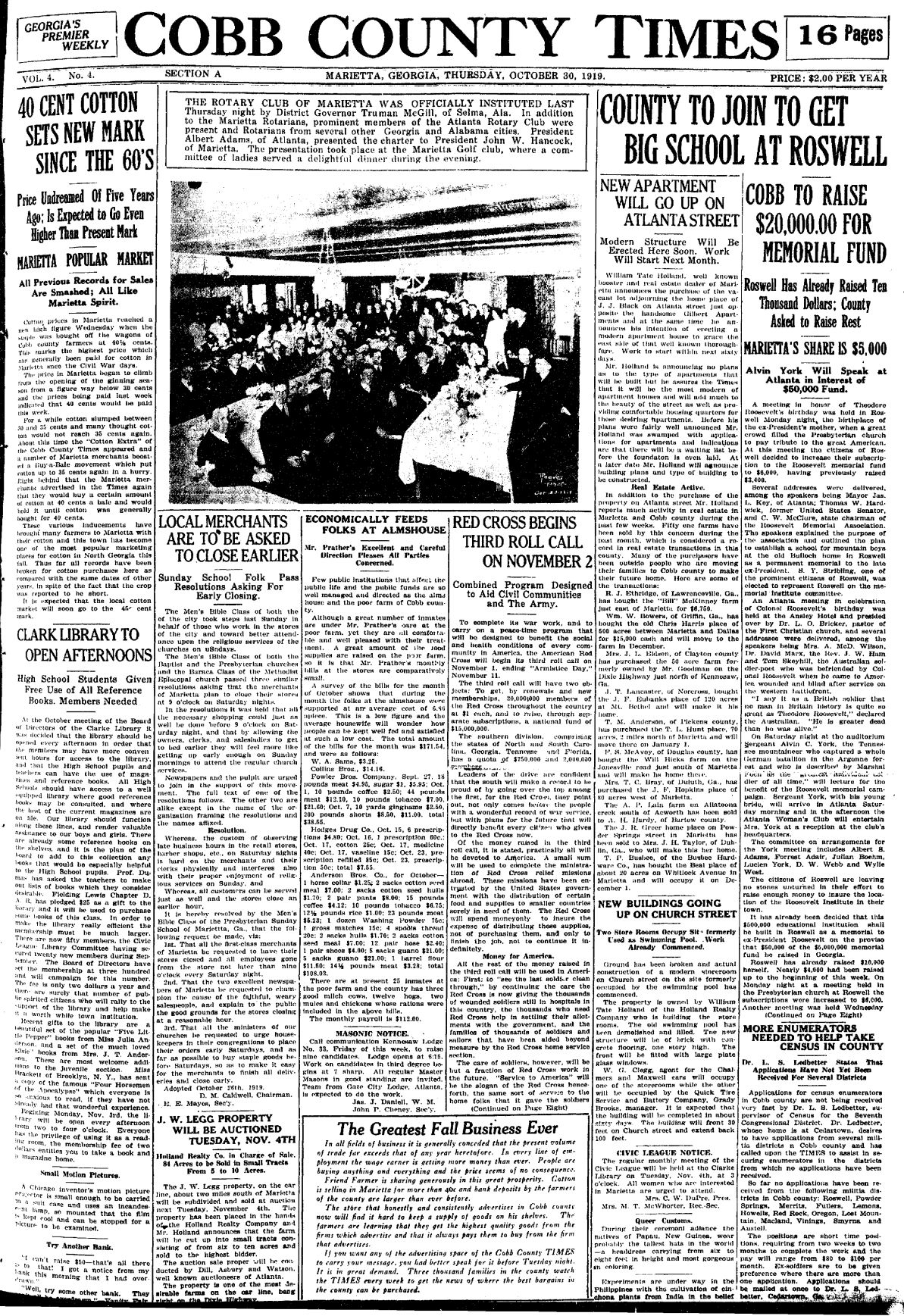 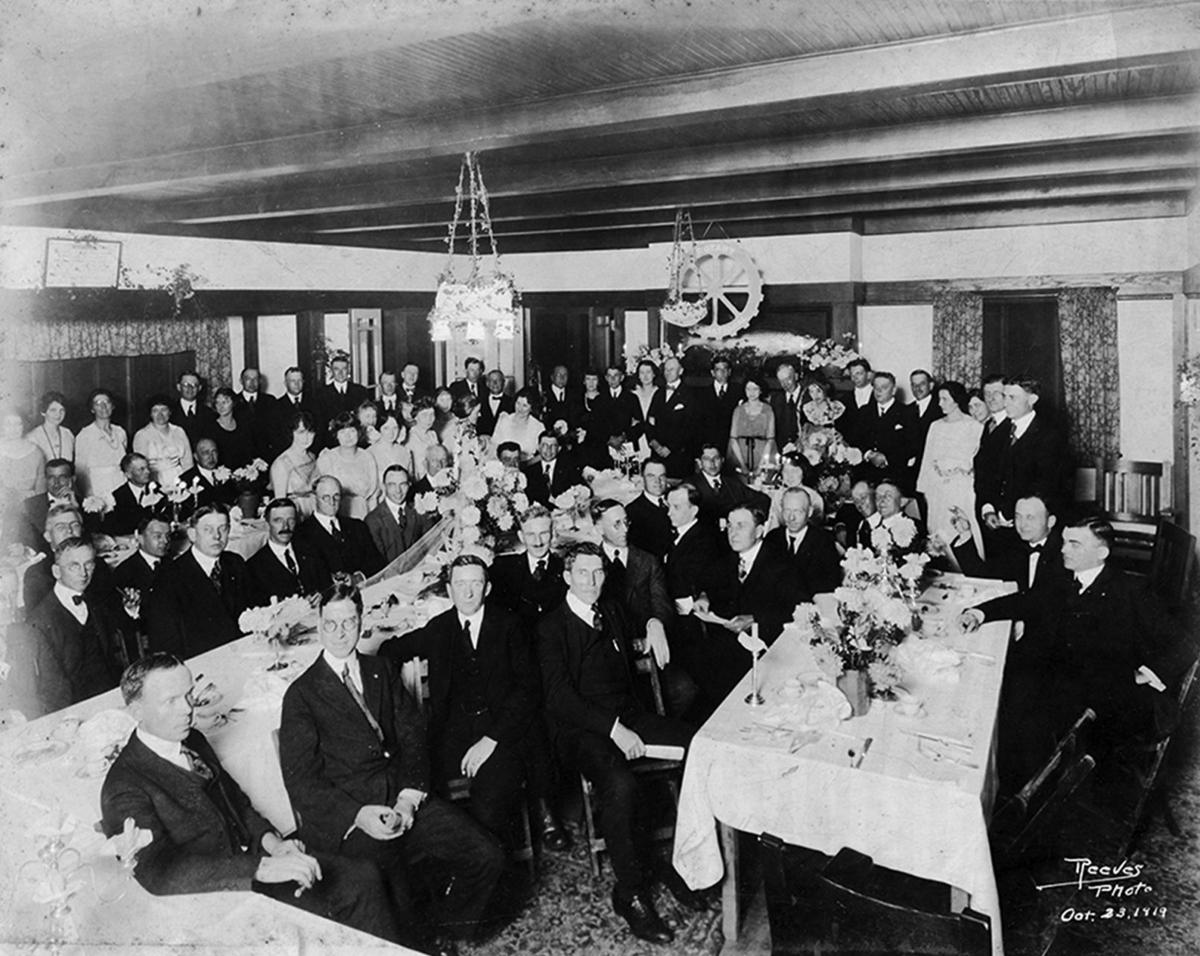 Pictured is the first meeting of the Rotary Club of Marietta at the Marietta Country Club on Oct. 23, 1919.

Pictured is the first meeting of the Rotary Club of Marietta at the Marietta Country Club on Oct. 23, 1919.

The Thursday, Oct. 30, 1919, edition of The Cobb County Times reported that the Rotary Club of Marietta was officially instituted the Thursday before by District Governor Truman McGill of Selma, Alabama. In addition to the Marietta Rotarians, prominent members of the Atlanta Rotary Club and Rotarians from several other Georgia and Alabama cities were present at the Marietta Golf Club. President Albert Adams of Atlanta presented the charter to President John W. Hancock of Marietta.

The number of American troops in France following the close of World War I was listed as less than 15,000 and rapidly diminishing. Gen. W.D. Connor, commander of those troops, said that everyone would be out of the country within a month once the repatriating of German prisoners, minus the 400 to 500 recuperating in hospitals, was complete.

The Friday, Oct. 30, 1919, edition of The Marietta Journal reported that Marietta was the subject of two lawsuits in U.S. Court in Atlanta.

The first was brought by Carrie Lehn Kraager of Pennsylvania, the mother of a dead WWI soldier that was killed in the city by a fallen live electrical wire near the Baptist church in early 1918. The $30,000 suit, filed on Oct. 21, 1918, was coming up for trial during the November 1919 term of court. Col. J.Z. Foster was representing the city, while Anderson & Slate of Atlanta represented the plaintiff.

The second suit was on the Scarboro notes, which had $48,000 in principal and interest.

In 1918, Marietta had secured the loan through Frank Scarboro, a broker in Tifton. On Feb. 15, 1919, Scarboro was reported as having left his office to go to New York and disappeared. Other parties that had business with Scarboro in Tifton reported heavy losses on his account and many irregularities.

The lawsuit, filed on Sept. 12, 1919, was brought by the National Park Bank of New York, which had purchased Scarboro’s notes. The case was expected to go to trial in the spring term of court.

The editors carried a story titled, “Many Soft Drinks Are Falsely Labeled,” that announced following Prohibition that “a flood of soft drinks of every conceivable type and variety” had fake labels.

According to the Bureau of Chemistry of the U.S. Department of Agriculture, these new beverages rushing to the soda fountains bore labels that falsely claimed they contained fruit juice or fruit pulp instead of the essential oils and essences actually used. The Bureau said it was an effort by the manufacturers to explain away the cloudy appearance of their products.

♦ “The Floyd County Jail has become so rotten that the Tribune-Herald reports the sheriff chaining prisoners to the floor in order to keep them inside the building at night. This is possibly cheaper than running moving pictures and having popular entertainments in the jail to keep the prisoners from going out evenings.”

The Monday, Oct. 27, 1969, Marietta Daily Journal reported that the gradual withdrawal of U.S. servicemen had dropped American troop strength in Vietnam below 500,000 for the first time in 20 months.

While other military bases in Georgia were losing military and civilian personnel under worldwide cutbacks announced by the Defense Department, the Tuesday, Oct. 28, 1969, paper reported that Dobbins Air Force Base in Marietta was gaining personnel.

A group of black students at Marietta High School were reported in the Wednesday, Oct. 29, 1969, paper as having presented “a verbal ‘ultimatum’” the day before demanding the school hold a new election for members of the school’s homecoming court. The students stated that the elections were unfair to black students.

Also that day, three pistol-wielding bandits were reported as having tied up a Powder Springs building contractor and his family, ransacked the house, stole $1,719 cash and threatened to kill their captives before leaving in the family’s car.

Volunteer firefighters being sought for PCFD