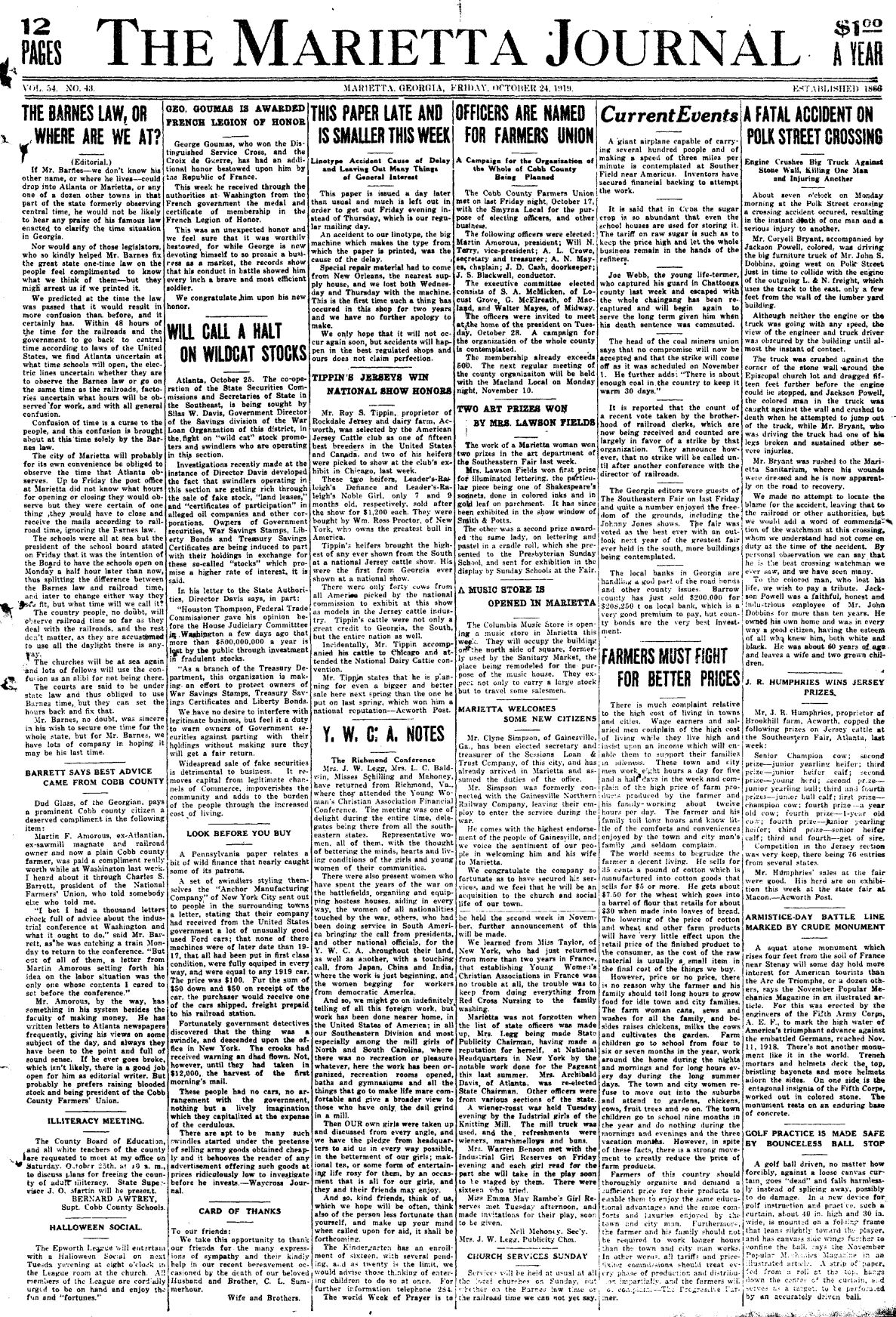 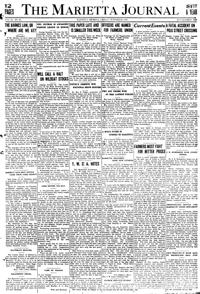 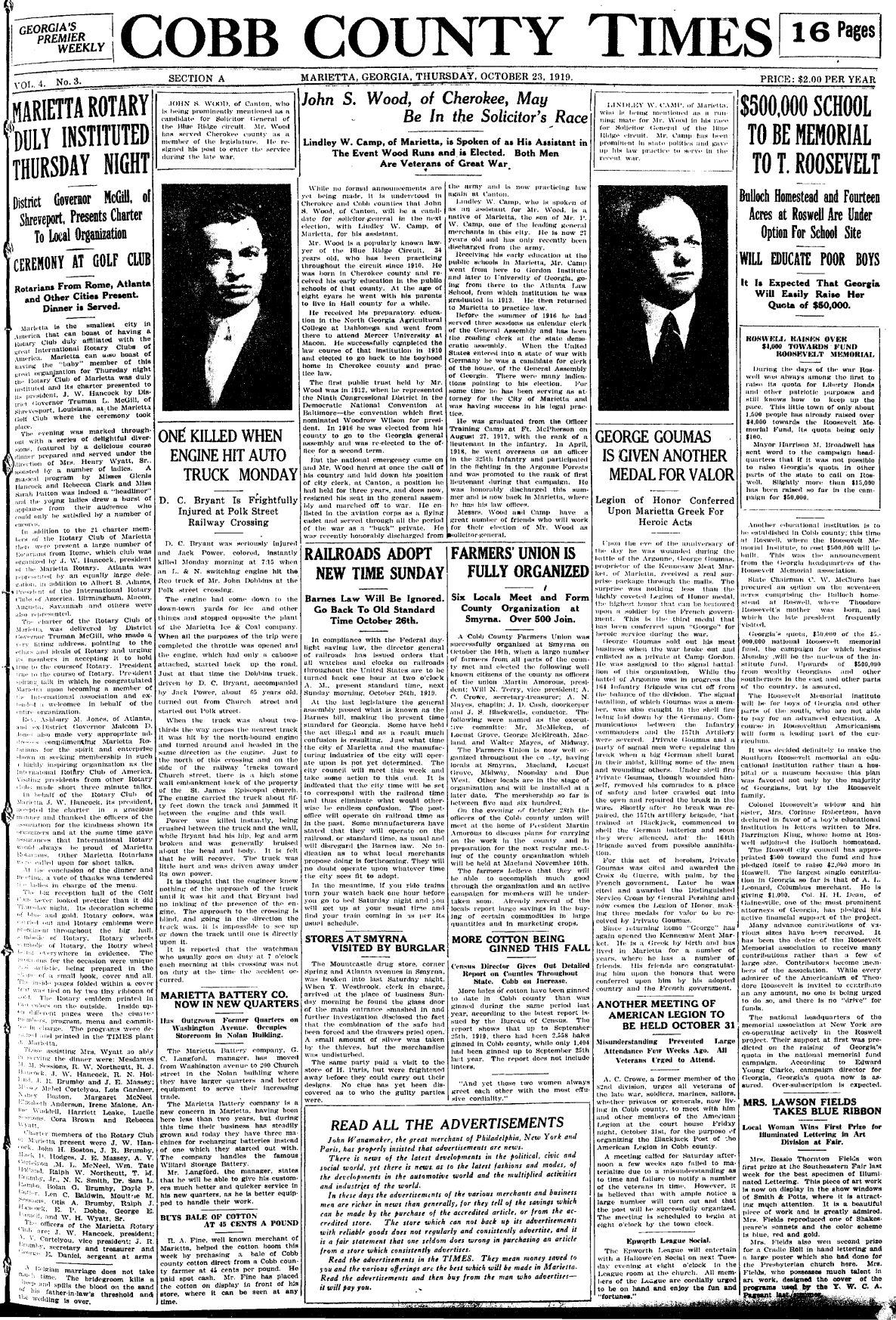 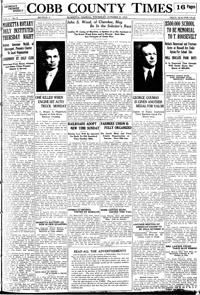 The Thursday, Oct. 23, 1919, edition of The Cobb County Times reported that there was a fatal accident around 7 a.m. the Monday before at the Polk Street railroad crossing.

Coryell Bryant, accompanied by Jackson Powell, was driving a large furniture truck belonging to John S. Dobbins on Polk Street when the truck collided with an outgoing Louisville & Nashville freight train. Neither vehicle was going at speed, but both the train engineer and Bryant’s views of the crossing were obstructed by the wall of the neighboring lumber yard.

The truck was crushed against the corner of the stone wall around the Episcopal Church parking lot and dragged another 15 feet before the engine could stop.

Powell, who tried to jump from the truck, was caught between the wall and crushed to death. Bryant suffered a broken leg and other severe injuries.

The Mercantile Drug Store at the corner of Spring and Atlanta avenues in Smyrna was reported as having been broken into the Saturday before. T. Westbrook, the clerk in charge, arrived the morning after the incident to find the glass of the front door smashed in, the safe had been forced open and the drawers pried open. A small amount of silver was stolen from the safe.

The editors reprinted a story from the Acworth Post newspaper about a young man from Acworth who had won several Army medals. The story said that “few men of the American Army (following World War I) have had such an extensive battle experience as has Reg. Supply Sgt. Charles C. Brown.”

The Friday, Oct. 24, 1919, edition of The Marietta Journal reported that WWI veteran George Goumas, who won the Distinguished Service Cross and the Croix de Guerre, received another honor from the Republic of France. Goumas received the medal and certificate of membership in the French Legion of Honor.

The artwork of Mrs. Lawson Fields of Marietta won two prizes in the art department of the Southeastern Fair in Atlanta the week before.

She won first prize for illuminated lettering, the piece being one of Shakespeare’s sonnets, done in colored inks and in gold leaf on parchment. It was being exhibited in the window of Smith & Potts on Marietta Square. The other piece, which won a second place prize, was lettering and pastel in a cradle roll. This piece was presented to the Presbyterian Sunday School.

The Columbia Music Store opened a Marietta location in the building on the north side of Marietta Square that was formerly the Sanitary Market.

In the “Current Events” column, was the following:

♦ “Joe Webb, the young life-termer who captured his guard in Chattooga County last week and escaped with the whole chaingang has been recaptured and will begin again to serve the long term given him when the death sentence was commuted.”

♦ “Marietta now has a Rotary Club. If they can ‘rotate” a hotel, a cotton mill, a passenger station and a few other things into Marietta we will say it was worth while.”

♦ “A manager of the Overland auto company in Los Angeles is said to have built a piece of ‘bad road’ to demonstrate his cars on. How unnecessary this would be in Georgia?”

In the “Personal Mention” column, written by Society Editor Mrs. D.C. Cole, was the following item:

♦ “Mrs. L.D. Hoppe, who came up from Atlanta to attend the Bridge at Mrs. Benson’s (the Wednesday before), was painfully hurt by an automobile. She was just getting on the (streetcar) at the Waterman Street crossing when an automobile knocked her down. She escaped serious injury, but suffered many bruises and a bad cut.”

In the Wednesday, Oct. 22, 1969, Marietta Daily Journal it was reported that the Justice Department asked a federal court to force desegregation of the Georgia public school system by September 1970. Attorney General John N. Mitchell said a motion for a preliminary injunction was filed in U.S. District Court in Atlanta to expedite the school desegregation suit the government filed against Georgia on Aug. 1, 1969. Georgia Gov. Lester Maddox was reported as promptly vowing to fight the suit and the state filed a delaying motion with the court.

Georgia maintained the 15th largest school system in the nation. It had 192 public schools serving one million children. Only 15% of the state’s 360,000 black students attended predominantly white schools in 1968.

“Three county stockade prisoners” were reported in the Thursday, Oct. 23, 1969, paper as overpowering a guard the night before and escaping. Two the men were recaptured by Cobb Police in Atlanta in the pre-dawn hours. The third man reached out to police and stated that he would surrender himself that afternoon.