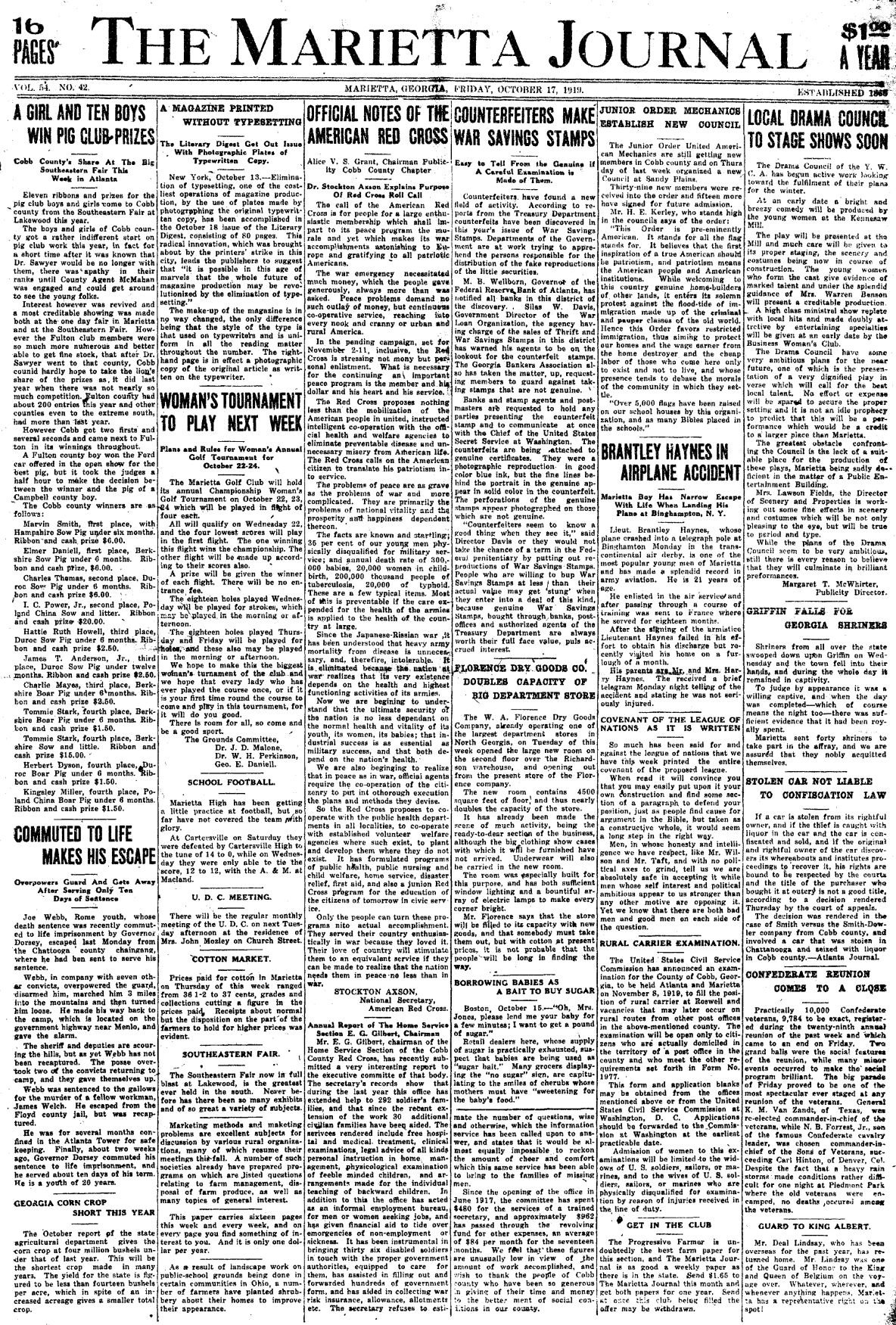 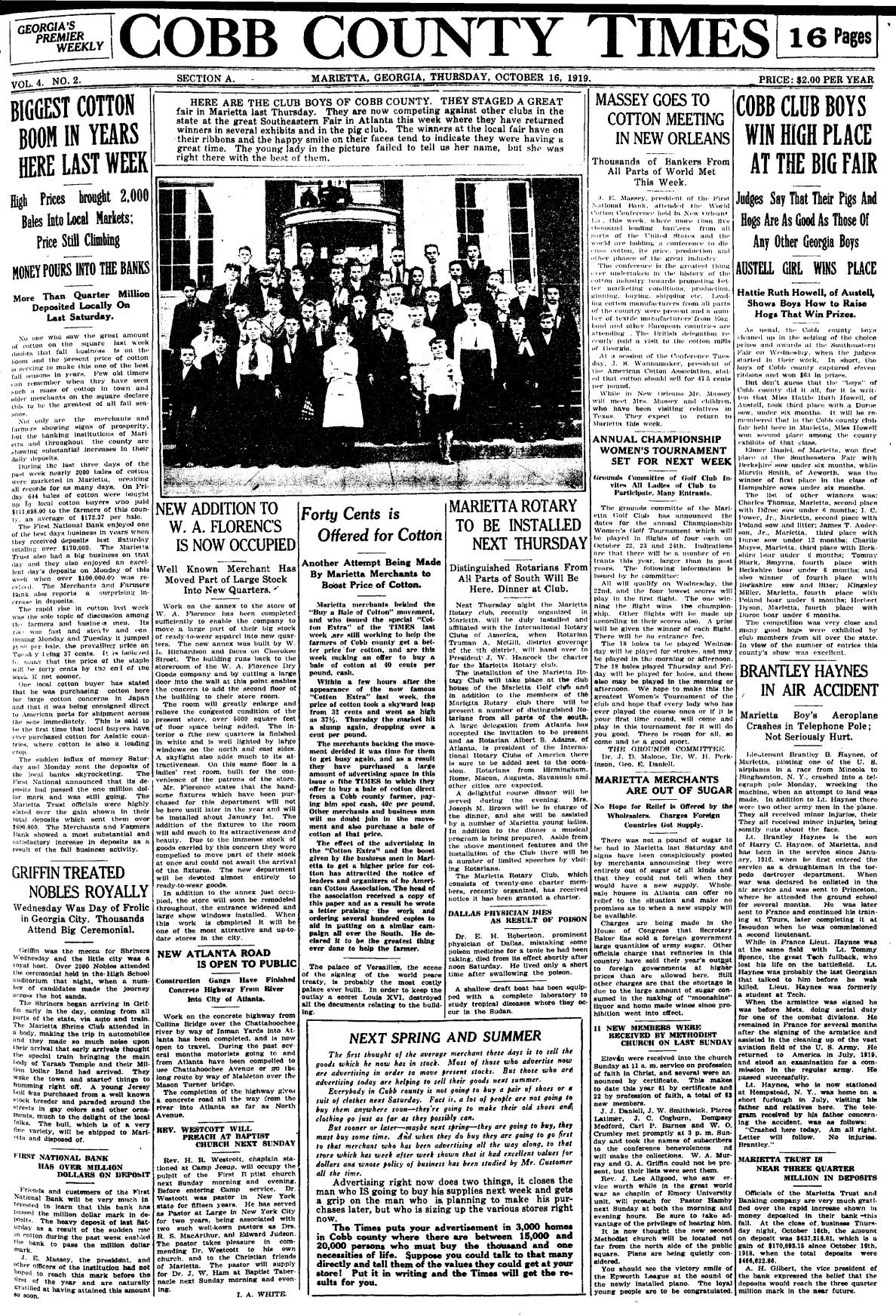 The Thursday, Oct. 16, 1919, edition of The Cobb County Times reported that the Marietta Rotary Club, which had recently organized, was expected to be installed and affiliated with the International Rotary Clubs of America. Rotarian district governor Truman A. McGill was going to hand over the charter for the club to President J.W. Hancock the following Thursday.

The editors wrote that “there was not a pound of sugar to be had in Marietta” starting the Saturday before. Signs had begun appearing at the merchants announcing that they were out of sugar of all kinds.

The wholesale houses in Atlanta were also out of sugar and could not say when a new supply would be made available.

Charges were being made that the nation’s sugar refineries had sold this year’s output to foreign governments at higher prices than what is allowed in the U.S.

“Work on the concrete highway from Collins Bridge over the Chattahoochee River by way of the Inman Yards into Atlanta” was reported as having been completed and were open for travel. For several months, motorists had been traveling to and from Atlanta via Chattahoochee Avenue or going the long way to Mableton and then over the Mason Turner bridge.

The Friday, Oct. 17, 1919, edition of The Marietta Journal reported that the Treasury Department had discovered counterfeiters had been making fake War Savings Stamps. M.B. Wellborn, governor of the Federal Reserve Bank in Atlanta, notified all of the banks in the district of the discovery.

Silas W. Davis, government director of the War Loan Organization — which was the agency in charge of the sales of Thrift and War Savings Stamps — had warned his agents to be on the lookout for the counterfeit stamps. The Georgia Bankers Association had also taken up the matter.

Lt. Brantley Haynes, 21, of Marietta was reported as having his plane crash into a telephone pole in Birmingham the Monday before during a transcontinental air derby.

Deal Lindsay of Marietta, who had been overseas for a year, was reported as having returned home. Lindsay was one of the Guard of Honor to the King and Queen of Belgium on their voyage over to the U.S.

The W.A. Florence Dry Goods Company, which had already been operating as one of the largest department stores in North Georgia, was reported as having opened a large new room on the second floor over the Richardson warehouse.

On the Editorial Page, the editors wrote the following item:

♦ “Of the thousands of old soldiers at the (Confederate) reunion (in Atlanta), traveling far from home, and living under unusual excitement, it is almost a miracle that there were no deaths.”

In the “Personal Mention” column, written by Society Editor Mrs. D.C. Cole, were the following items:

♦ Hoke, a pointer dog belonging to J.M. Fowler and Dr. Elder, was reported as being poisoned the previous week.

♦ Treville, the son of McDonald Lawrence, was reported as being kicked in the back by “a vicious horse” the Sunday before, but escaped serious injury.

♦ Tom Griggs, the Polk Street railroad crossing watchman, was reported as covering the Atlanta Street crossing the Sunday before and counted every automobile that crossed the tracks that day. Griggs’ tally from 7 a.m. to 6 p.m. was 1,550 cars.

In the “News From Our Correspondents” column, Polly — the Powder Springs correspondent — reported that all of the businesses and some of the surrounding residences were enjoying electric lights the Friday night before. The remaining homes were expected to be wired for electricity in the next few days.

In the Tuesday, Oct. 14, 1969, Marietta Daily Journal it was reported that over 200 men and women from Cobb, Gwinnett and DeKalb counties watched a graphic display of hardcore pornography the night before. The film was screened by educators, lawmakers and citizens to show that Georgia pornography laws were ineffective.

Cobb District Attorney General Ben Smith, a member of the panel which discussed pornography laws after the screening, said that Georgia’s laws hampered prosecutors. Smith noted that one law required him to give the seller of pornographic materials 30 days to take them off their newsstands.

Students and faculty members at Kennesaw Junior College were reported in the Thursday, Oct. 16, 1969, paper as having observed the Vietnam Moratorium the day before with “a spirited discussion on the pros and cons of the conflict” and the nation’s role in the world.

Maintenance workers at KJC for a time were protesting against the protesters, refusing to set up a podium and electronic equipment outdoors. After the workers relented, it rained and the discussions were moved indoors anyway.

Many of the students were observed wearing black armbands and protest buttons.