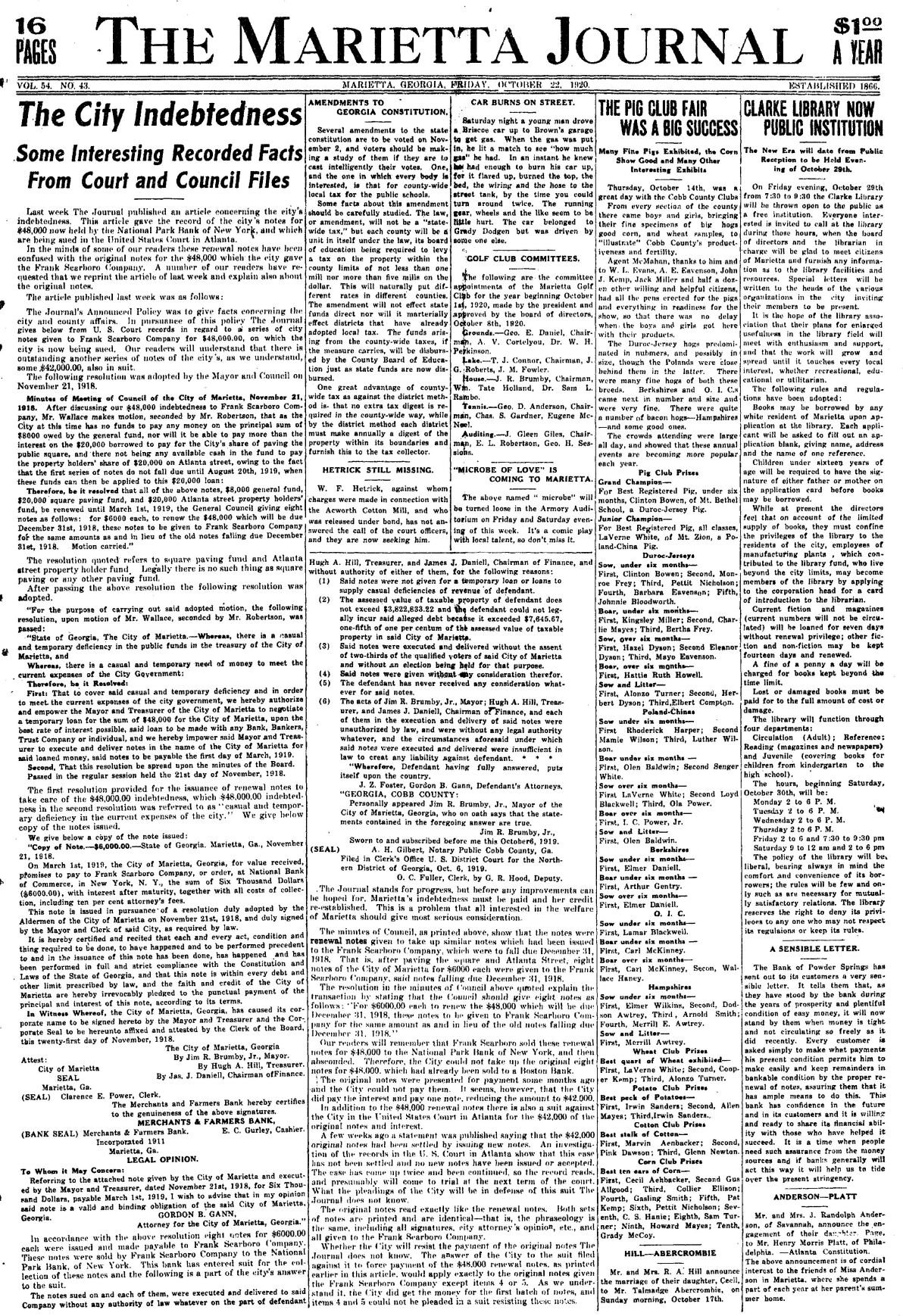 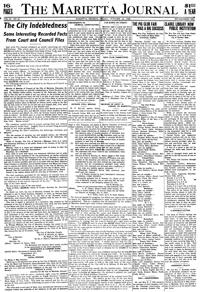 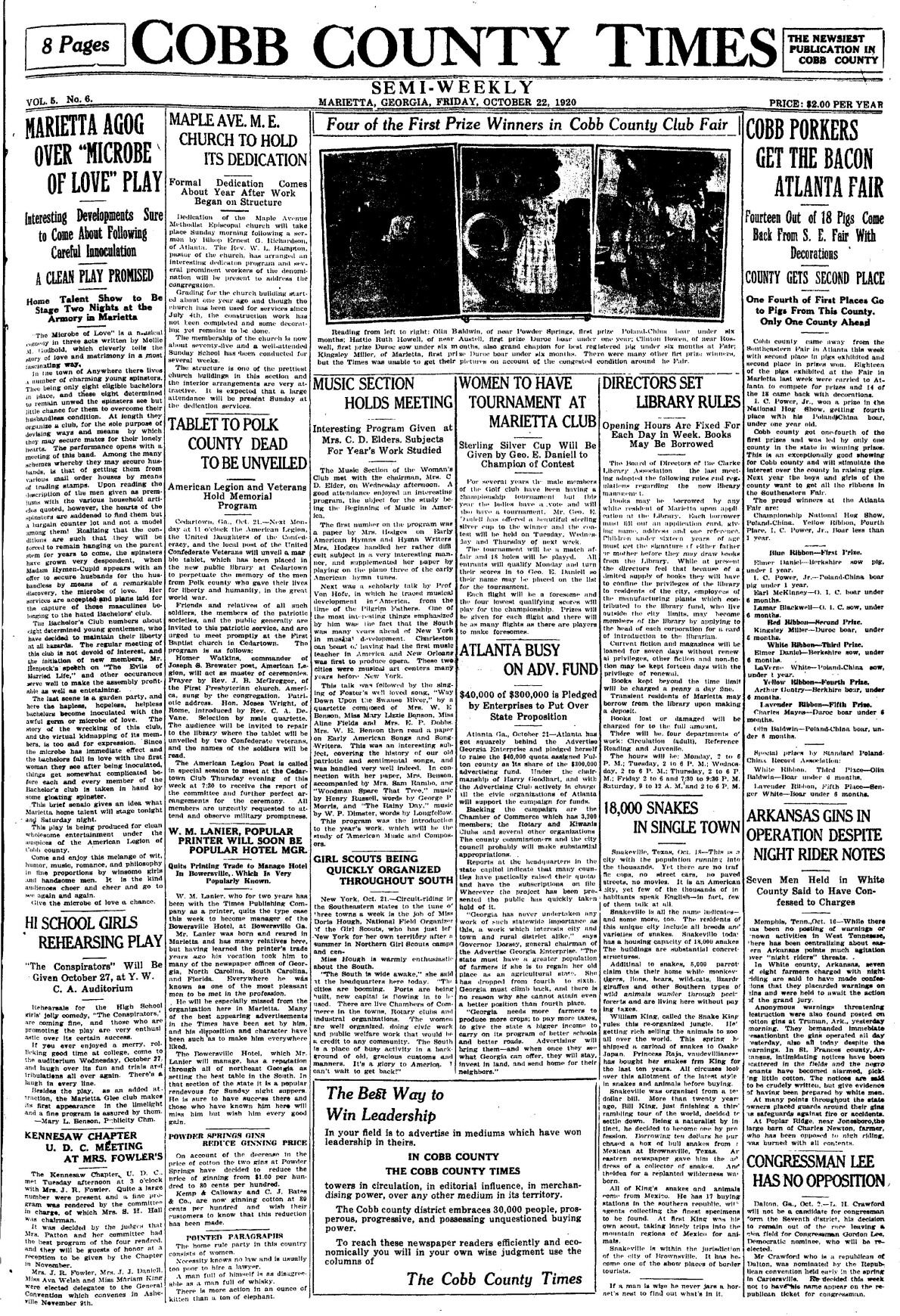 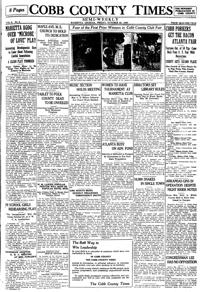 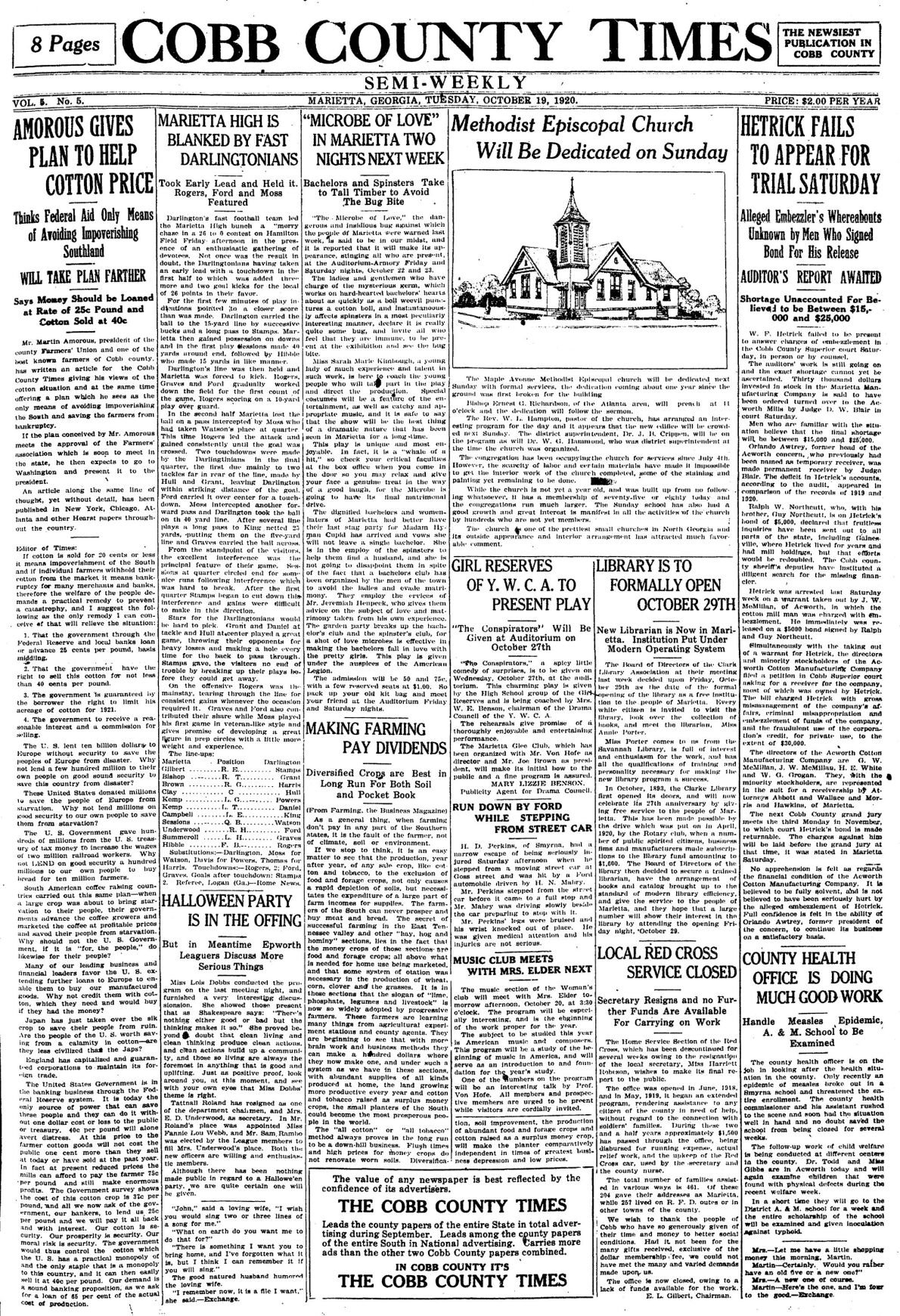 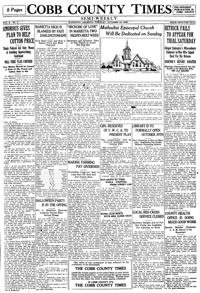 The Tuesday, Oct. 19, 1920, edition of The Cobb County Times reported W.F. Hetrick was said to have failed to answer the charges of embezzlement in the Cobb County Superior Court the Saturday before. Thirty thousand dollars invested in stock in the Marietta Manufacturing Company was ordered to be turned over to the Acworth Mills by Judge D.W. Blair.

The Friday, Oct. 22, 1920, edition of The Cobb County Times had the following blurb from the editors on the Editorial Page:

“Those who ride over the dirt streets of Marietta enjoy all the stunts of the mountain goat — leaps from height to height and falls from precipices into the valleys. Sooner or later some will possibly have broken necks, too.”

The Friday, Oct. 22, 1920, edition of The Marietta Daily Journal reported that the Saturday night before, a young man drove a Briscoe car to Brown’s Garage to get some gas. After he put gas in the car, the man lit a match to “see how much gas” he had. The result was that the car and the hose to the street tank instantly caught on fire.

On the Editorial Page, the editor wrote a piece about the dirt roads in Marietta. As the editor was heading home the Sunday before, he found “the dust on the Dixie Highway was thick enough to be cut with a knife” and that “cars were coming and going as thick as bees in a buckwheat field in June.” The following Monday morning, there was a head-on collision between two Fords on the same stretch of road. The editor urged a speed limit of 20 miles per hour on the crowded highway and that “even that rate is dangerous when the air is full of dust.”

Evidence of the Civil War was reported as being found in the lumber used in making pens for pigs at the Pig Club show the previous week. The lumber, from timber cut near Kennesaw Mountain, contained several minie balls that were cut out of it after the pens were constructed.

In the Tuesday, Oct. 16, 1945, edition of The Marietta Daily Journal it was reported that plans for “a Marietta motel, a streamlined tourist hostelry drawn by six Georgia Tech students,” was on display in Atlanta. The location of the proposed motel site was along the Four-Lane Highway, or U.S. Hwy. 41, between Austin and Page Streets at the Barnes Mill Road. The 20 drawings in full color showed buildings that represented two types of cottages to be built — 3-room buildings for weekend guests and 1-rooms for those just staying overnight.

♦Chaplain Charles S. Schilling, son of Marietta Post Master Walter Schilling, was reported as being scheduled to speak at St. James Church the following Sunday. Schilling was “known to the men of the 29th ‘Purple Heart’ Division as ‘the front line chaplain.’” He wore the Silver Star, Bronze Star and was awarded two Purple Hearts. When the company commander and several others had been killed, Schilling was credited with rescuing the captain’s body from the front lines under fire and rallying the remaining men to attack.

♦A United Press story picked up by the MDJ reported that small white tags on 14 boxes in a Shanghai funeral parlor bore the names of 14 American airmen executed by the Japanese on Formosa in June 1945. The boxes contained the ashes of the 14 fliers who were cremated after the execution. Among them was Sgt. Harry U. Spivey of Atlanta. The Japanese were said to have carried out these executions even though their government was making peace overtures with the Allies at the time.

The Sunday, Oct. 18, 1970, paper reported that “the first C5A Galaxy to fly, establishing a new era for super-jet cargo aircraft, was destroyed by fire” at 3 a.m. the day before when “thousands of gallons of jet fuel exploded at the Lockheed-Dobbins complex in Marietta.” Phillip L. Smith, 31, a Lockheed flight test mechanic from Roswell was killed. Minutes after the plane exploded, the entire facility was closed down. Newsmen, curious area residents and others that heard the three explosions were barred entry, including employees who normally would have been allowed through the gates with their company passes. The only outsiders to pass through were a few Cobb policemen and firefighting crews from several area fire departments, including Marietta, Fair Oaks and the Dobbins fire departments.