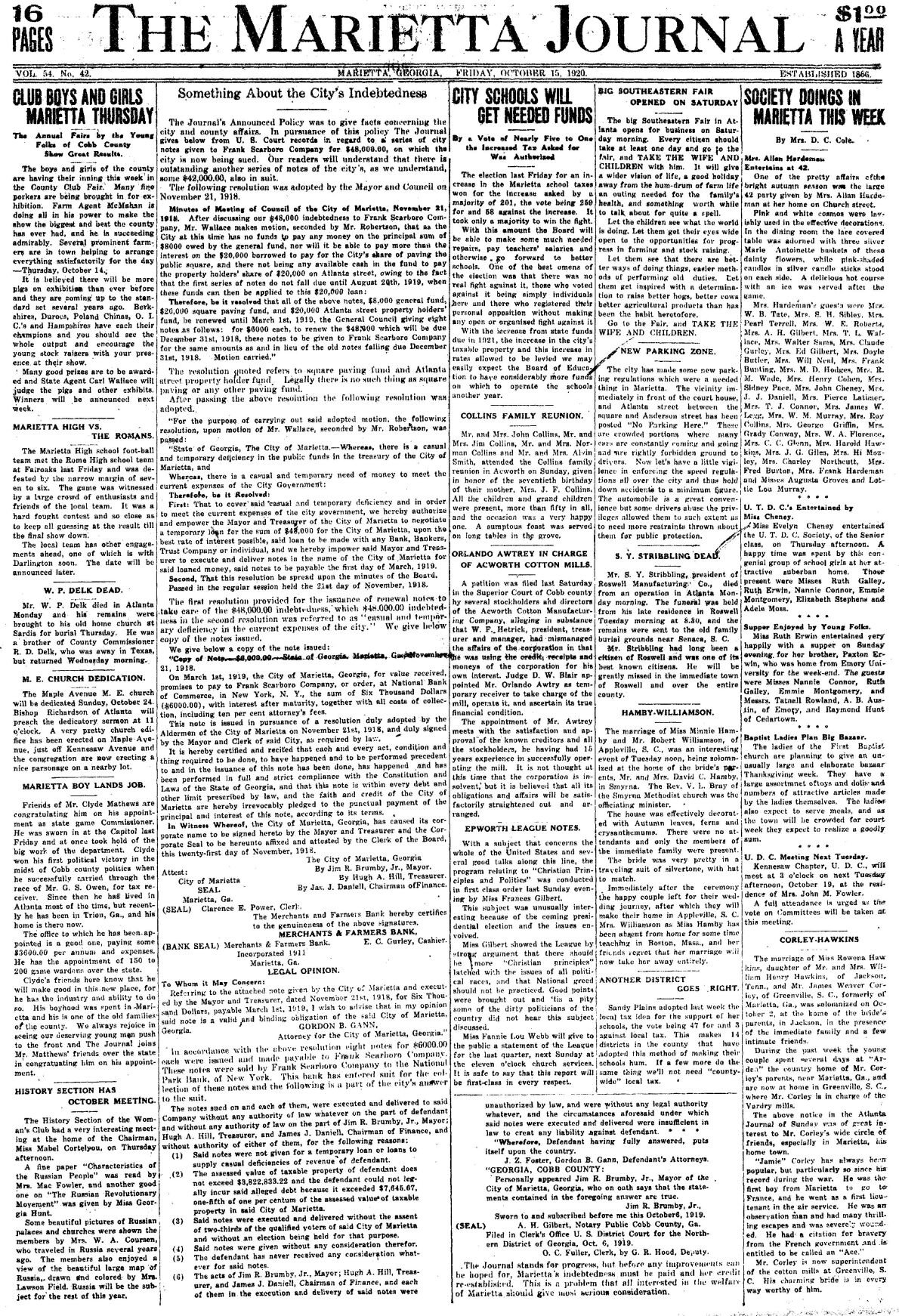 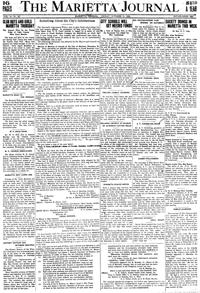 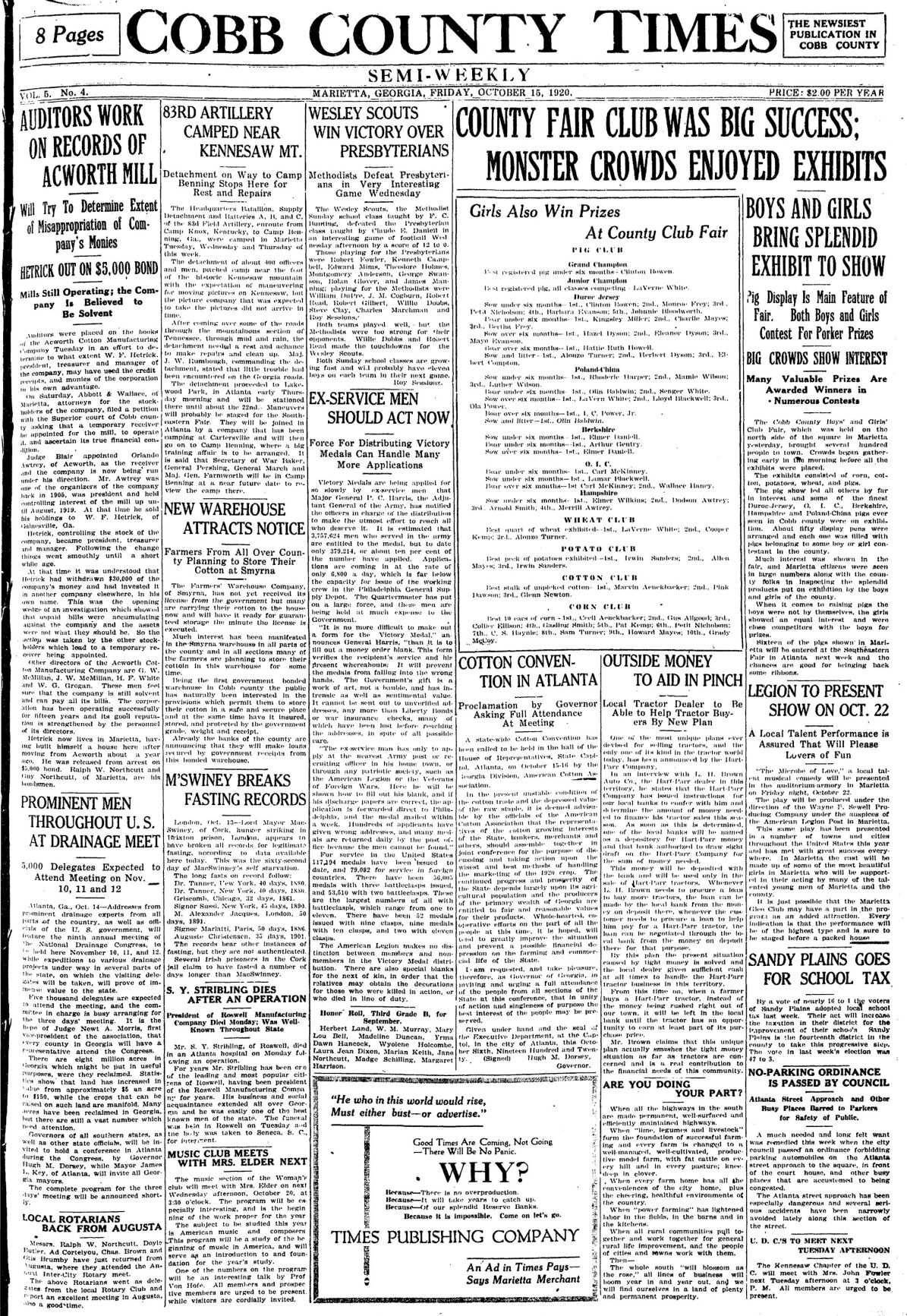 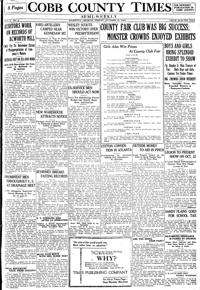 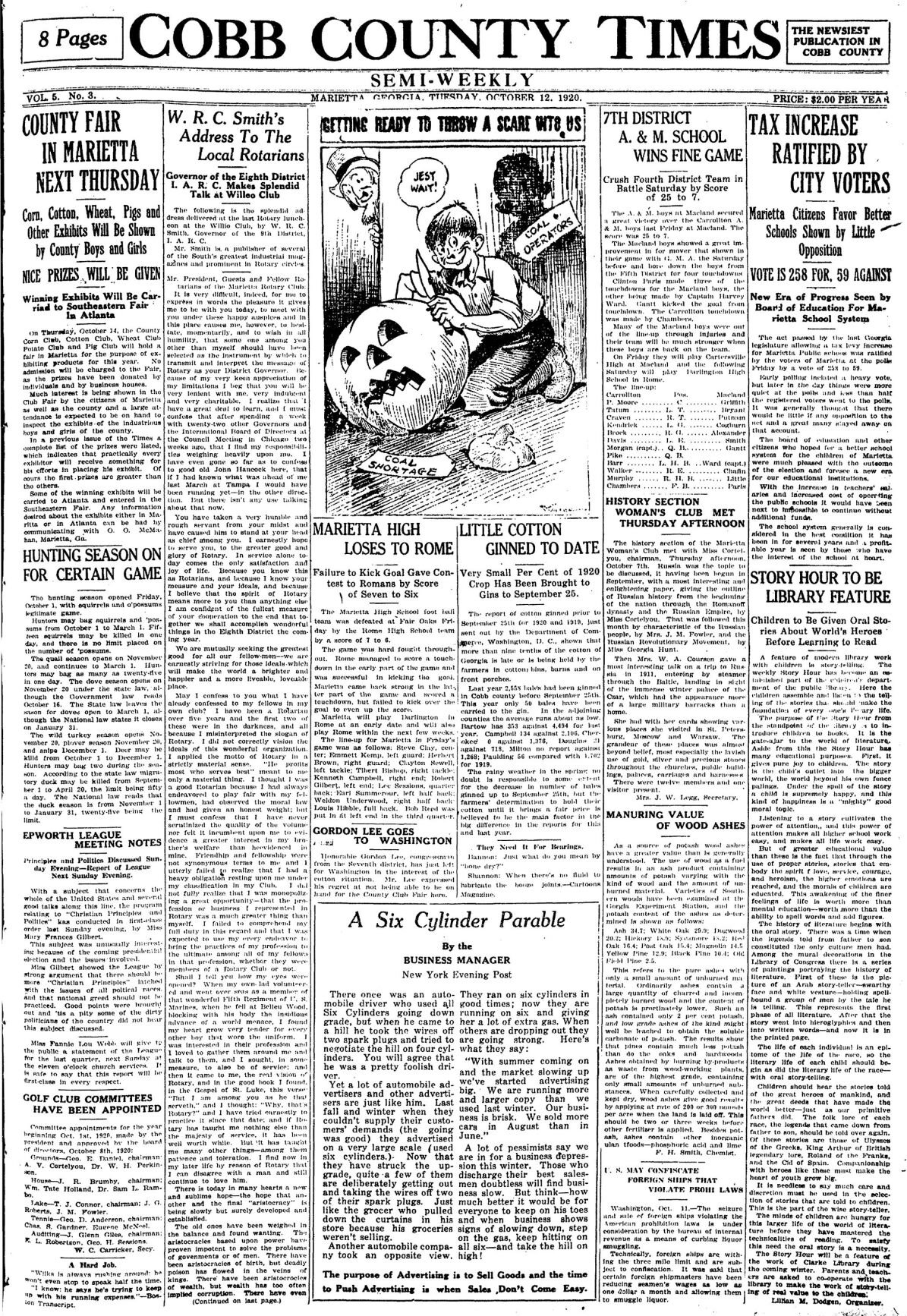 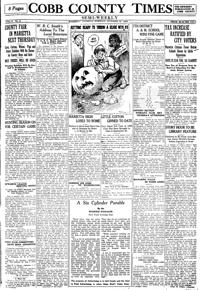 The Tuesday, Oct. 12, 1920, edition of The Cobb County Times reported on the front page that “the seizure and sale of foreign ships violating the American Prohibition laws” were under consideration by the Bureau of Internal Revenue as a means of curbing liquor smuggling.

In the “News From Our Correspondents” column, the Roswell section reported that Dr. R.J. Power’s new drug store building was nearly completed. It was being built with brick and tile and featured a plate-glass front.

On the Editorial Page, the editors wrote:

“Henry Ford doesn’t spend much on newspaper space, but he is a bear at pulling off publicity stunts that set the world a-talking. Once it was a pilgrimage to Europe to stop the war, then a race for senate, and now a cut in the price of Fords when everything else was skyward bound.”

The Tuesday, Oct. 15, 1920, edition of The Cobb County Times reported that the Headquarters Batallion, Supply Detachment and Batteries A, B and C of the 83rd Field Artillery, who were en route from Camp Knox in Kentucky to Camp Benning in Georgia, were camped in Marietta for the next three days. The detachment of about 400 officers and men pitched camp near the foot of Kennesaw Mountain.

In the Tuesday, Oct. 9, 1945, Marietta Daily Journal it was reported that James V. Carmichael was elected president of the Marietta Country Club at the annual meeting held at the clubhouse the night before. Elected to serve with Carmichael for two years were Cecil Strait, vice president; Frank McNeel, secretary-treasurer and a board of directors consisting of A.V. Cortelyou, George Harrison, Alvin Dodd, Fred Wilson, George Thomas and W.L. Beasley.

♦Daniel V. Palmer, gunner’s mate 3/C, was reported as participating in almost 18 months of continuous fighting in virtually every naval engagement in the North Pacific prior to the Japanese surrender, aboard the U.S.S. Melvin. Palmer’s battle record showed participation in the historic battle for Leyte Gulf, one of America’s greatest naval victories. His destroyer executed an unsupported high torpedo run on a large Japanese task force in Surigao Strait and assisted in sinking an enemy battleship and destroyer.

♦Raymond K. Spinks, seaman 2/C, was reported as having witnessed the astonishment of Japanese harbor pilots when they saw his ship, the Pensacola, at the surrender ceremonies off Ominato, Japan. The enemy at various times during the last three years of the war had reported sinking the “Grey Ghost” five times.

S/Sgt. Raymond Butler, husband of Sara E. Butler of Austell, was reported in the Monday, Oct. 15, 1945, paper as having been killed in action in the European Theater of Operations. Butler was listed on the latest casualty release from the War Department.

In the Wednesday, Oct. 14, 1970, paper the Cobb County Board of Education was reported as voting to allow female students in high school to wear pantsuits and tailored stacks. The board previously required that the standard of dress for high school girls be “dresses, skirts with blouses or sweaters, or dresses or skirts with center seams which maintain the appearance of a dress or skirt.”

Also that day, a Smyrna man was reported as being arrested on a charge of aggravated assault the night before. Police poured tear gas grenades into his home where he had barricaded himself after firing several shots at his wife. The 40-year-old man was arrested by sheriff’s deputies after he staggered out of his tear-gas filled home with a shotgun in his hand.