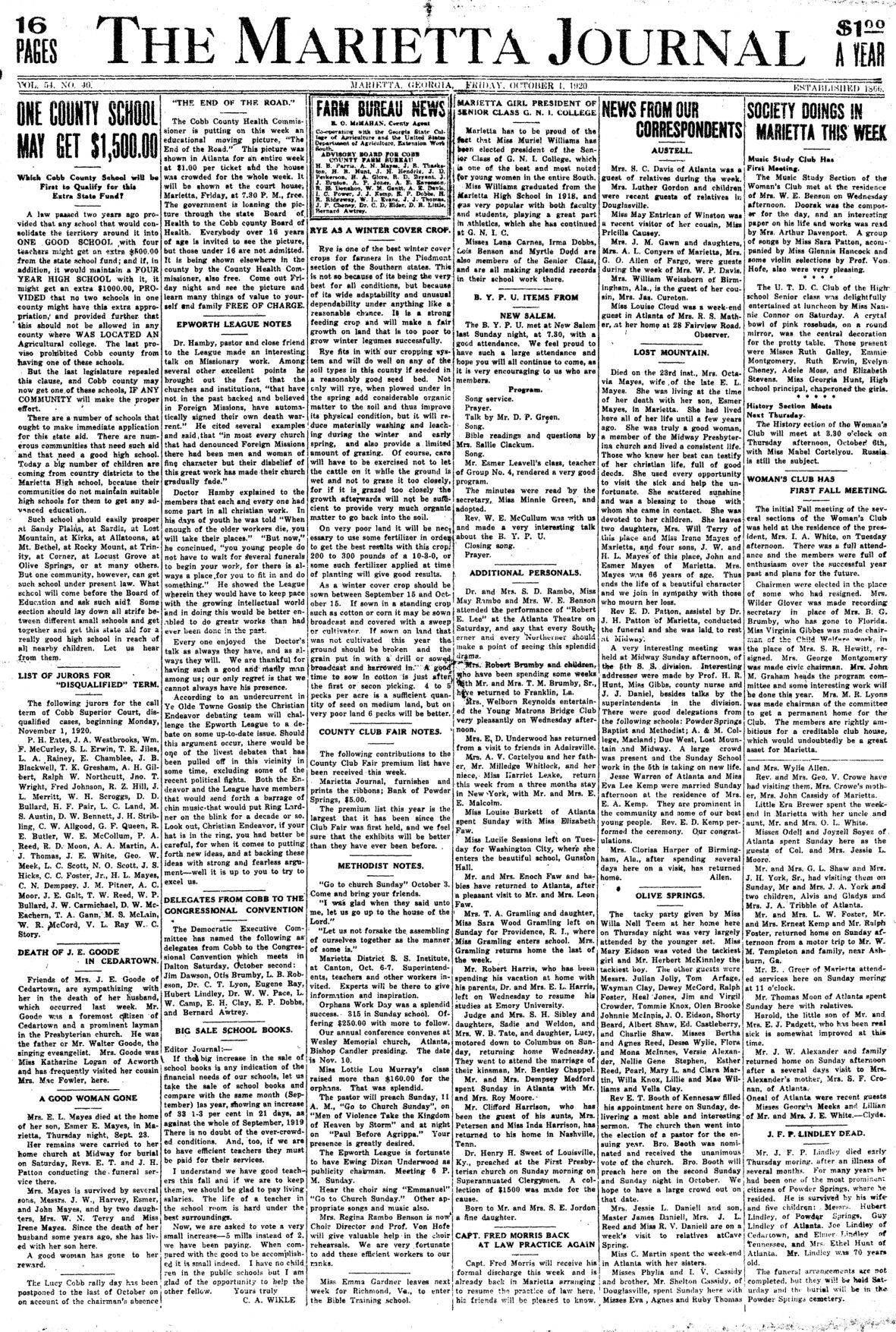 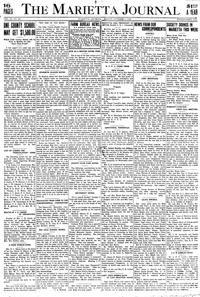 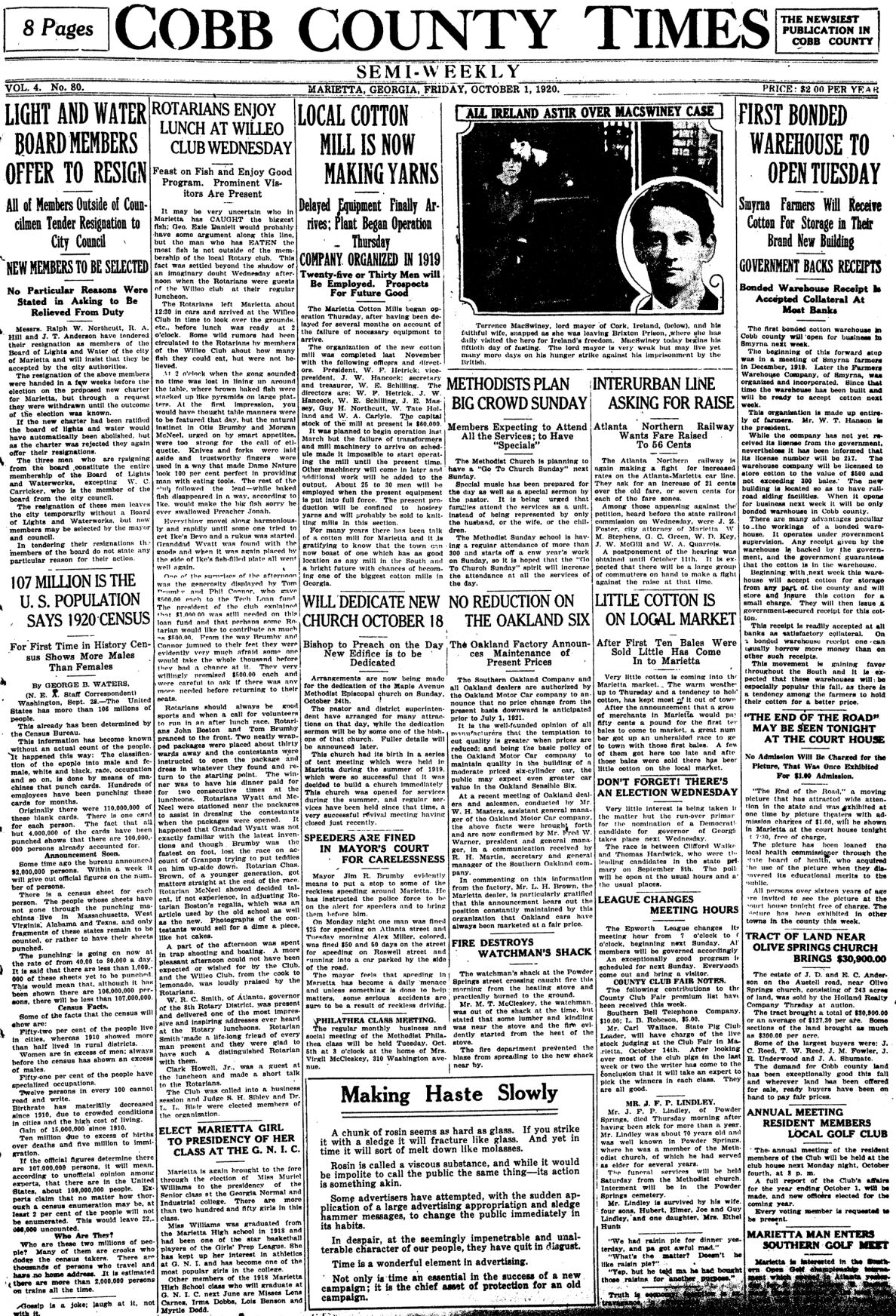 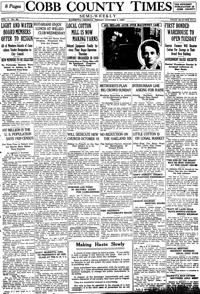 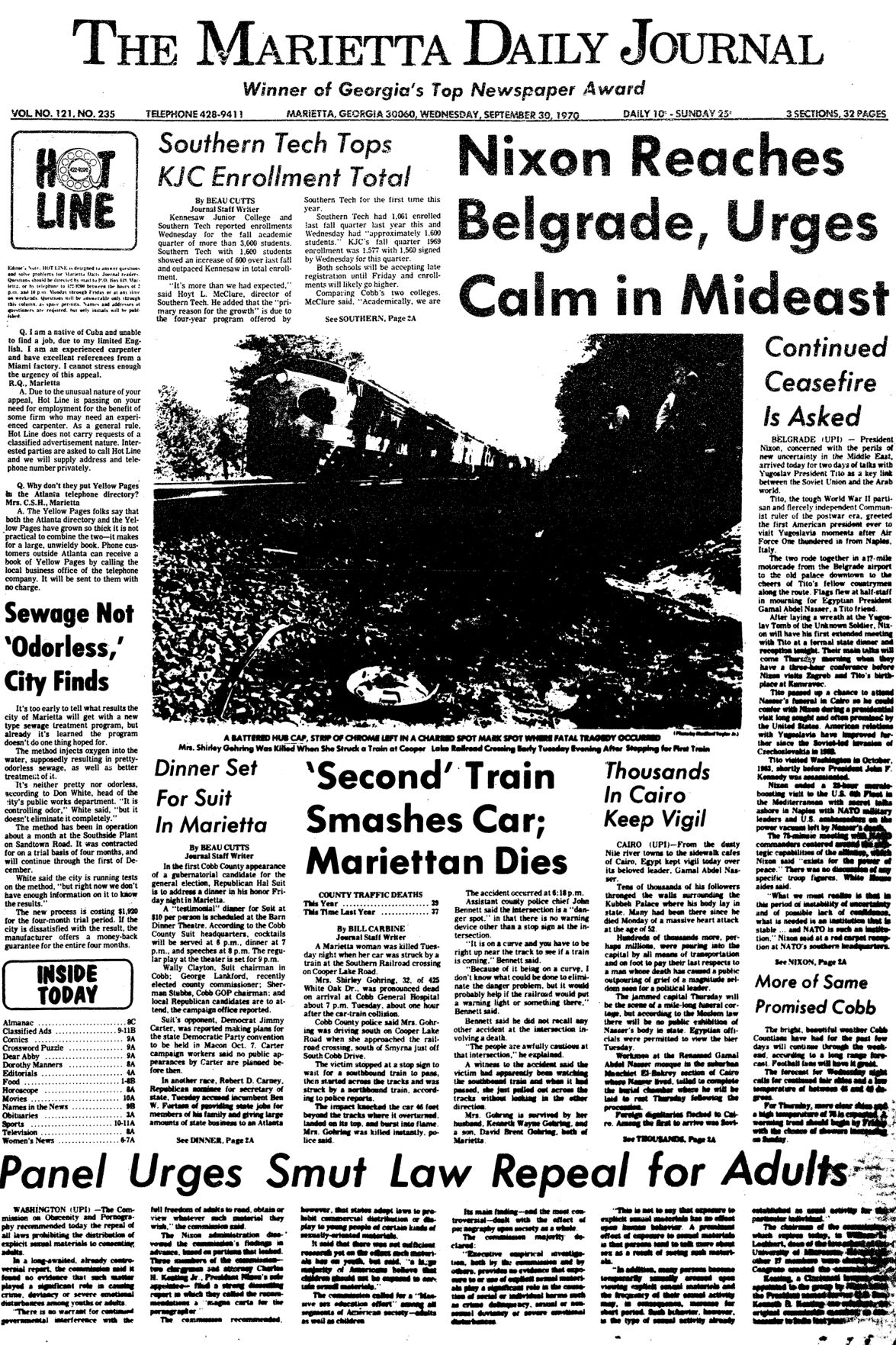 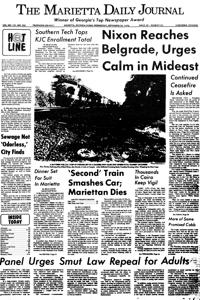 The front page of the Marietta Daily Journal from Wednesday, Sept. 30, 1970. 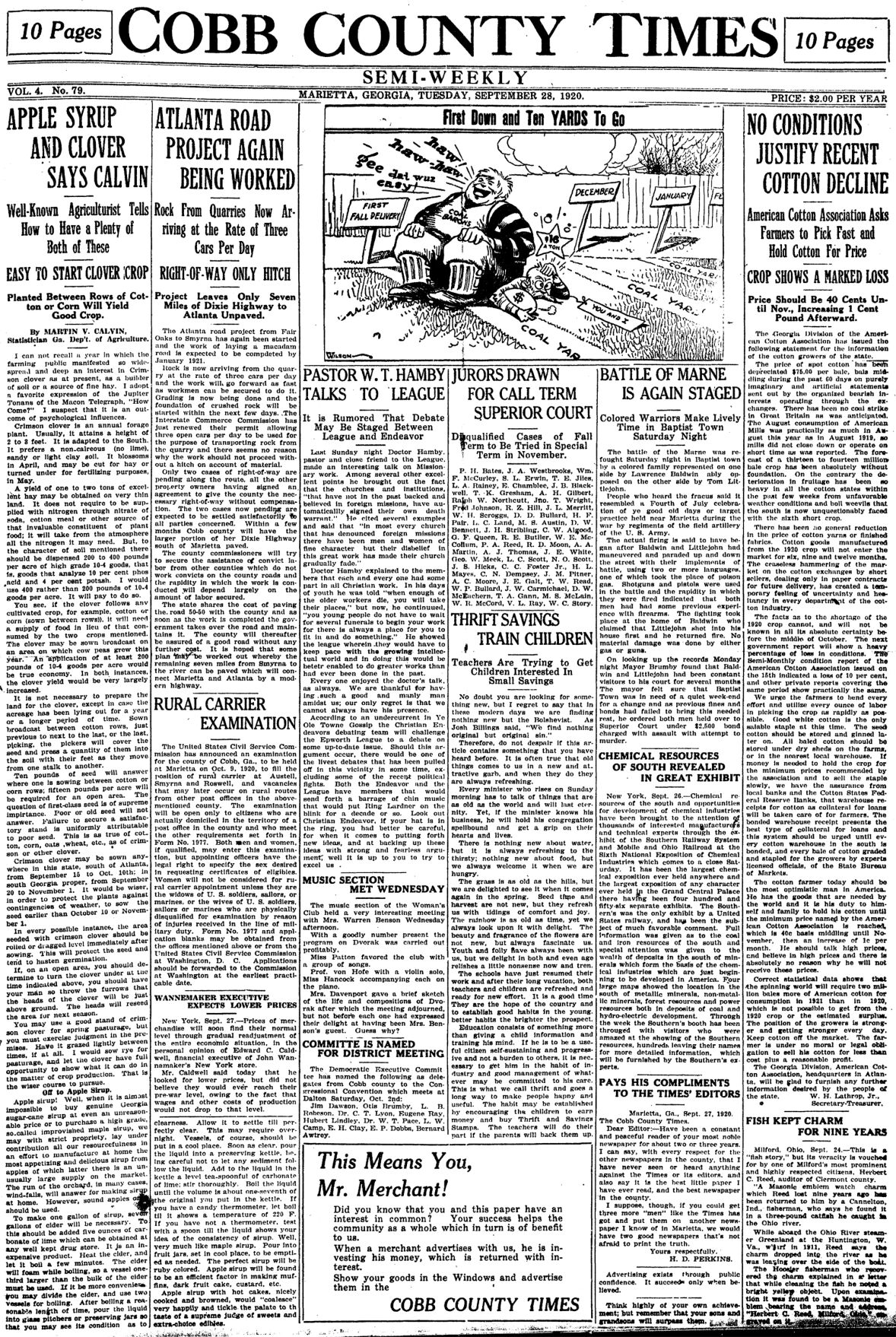 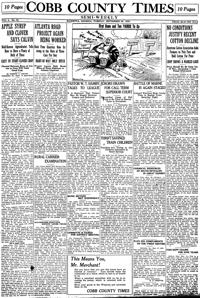 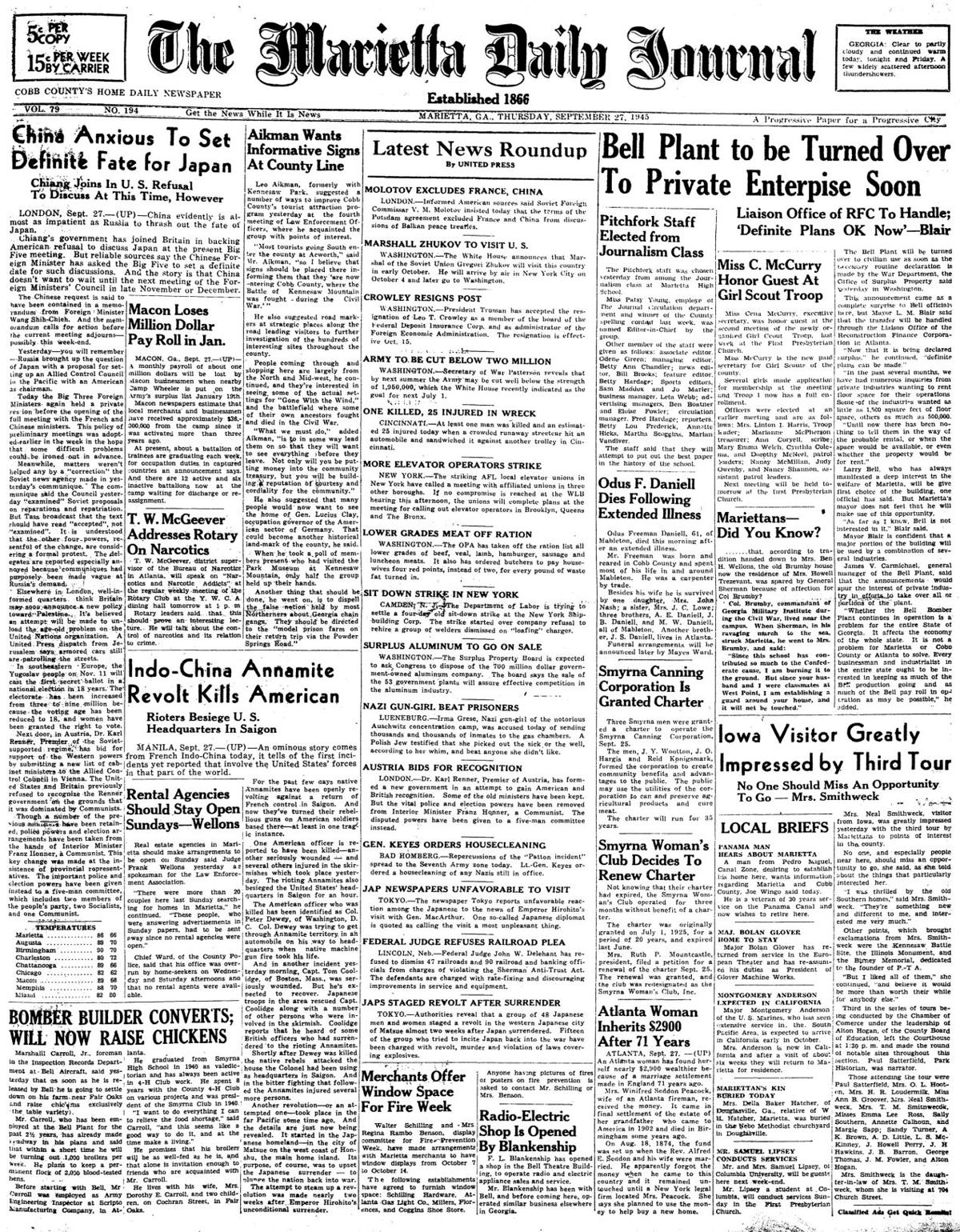 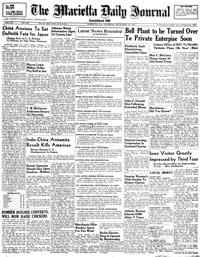 The front page of the Marietta Daily Journal from Wednesday, Sept. 30, 1970.

The Tuesday, Sept. 28, 1920, edition of The Cobb County Times had a full page ad on Page 3 for Holland Realty Co. announcing the subdivision of the 240-acre D.S. Anderson Farm on Austell Road at the Olive Springs Church and School, which was only one-half mile from Fair Oaks Station on the Marietta car line. The land was bought by Anderson in 1873 and after his death was held by his wife until her death in the spring of 1920.

The Friday, Oct. 1, 1920, edition of The Cobb County Times reported that the watchman’s shack at the Powder Springs Street railroad crossing in Marietta caught fire that morning from the heating stove and almost burned the structure to the ground. M.T. McCleskey, the watchman, was out of the shack at the time. Lumber and kindling near the stove were cited as the source of the fire.

The following items appeared in the Thursday, Sept. 27, 1945 paper:

♦The Office of Surplus Property in Washington was reported as saying that the Bell Bomber Plant would be turned over to civilian use “as soon as the necessary routine declaration is made by the War Department.” The announcement came as a “complete surprise” to Bell officials in Marietta, but Mayor L.M. Blair said that the transfer would be handled through the Liaison Office of the Reconstruction Finance Corporation in Atlanta.

Larry Bell, who always had a deep interest in Marietta, was to be given first choice of the building. Blair, however, did not believe that he would make use of the opportunity.

♦Marshall Carroll Jr., foreman in the Inspection Records Department at Bell Aircraft, was also reported as saying that once he was released by Bell, he would settle down on his farm near Fair Oaks to exclusively raise chickens. Carroll, who had been employed at the Bell Plant for 2 1/2 years, expected to turn out 1,000 broiler chickens per week and keep a permanent flock of around 2,000 hens.

The Friday, Sept. 28, 1945, paper reported the retirement of the “Marietta Belle,” the 46th B-29 Superfortress off the Bell Bomber Plant’s assembly line, after a long career of combat service by the 58th Bombardment Wing on Tinian Island in the Marianas.

The bomber, which had 44 operational and combat missions, “was damaged in a crackup on landing, after a raid in which it absorbed a terrific drubbing from Japanese anti-aircraft.” The plane was named by Maj. Charles R. Mallory Jr., of 985 Drewry Street in Atlanta, who piloted the aircraft on most of its flights.

The Marietta Belle began operations against Japan in October 1944 when the 58th Wing was operating from India and China bases as part of the 20th Bomber Command. From that time until the Tinian mishap, it flew on 27 bombing missions to every part of Japan’s “inner empire,” striking targets scattered over “the greatest territory ever covered by an air force.”

Two Marietta men were reported in the Monday, Oct. 1, 1945, paper as having been liberated from German prison camps and arriving in San Antonio, Texas. Lt. Claude C. Edwards, of 143 Trammell Street, and Sgt. Jack R. Burton, of Route 3, were both members of the Air Corps and shot down over Germany.

Lt. Edwards served 18 months as a bombardier in the European theater of operations. Sgt. Burton served 14 months in the theater as a gunner and was awarded the Air Medal.

In the Friday, Sept. 25, 1970, paper it was reported that Adelbert F. Waldron, a former Army sergeant in Powder Springs, was Georgia’s answer to Sgt. Alvin York, the famous Tennessean who was highly decorated during World War I for capturing or killing about half of the German army. Waldron, who left service in March 1970, was personally credited with killing 113 enemy soldiers in Vietnam.

An expert rifleman, Waldron was a leader of a sniper team while serving two tours of duty in Vietnam. The day before at Ft. McPherson, he was presented his second Distinguished Service Cross by Brig. Gen. Samuel L. Reid, Third U.S. Army chief of staff. The award was the Army’s second highest award.

He also had two Silver Stars and two Bronze Stars, which were the third and fourth highest awards in the Army.

A Marietta woman was reported in the Wednesday, Sept. 30, 1970, paper as being killed instantly the day before when her car was struck by a train at the Southern Railroad crossing on Cooper Lake Road.

Cobb County Police said the woman was driving south on Cooper Lake Road when she approached the railroad crossing, south of Smyrna just off South Cobb Drive. The victim stopped at a stop sign to wait for a southbound train to pass and then started across the tracks only to be struck by a northbound train.

The impact knocked the car 46 feet beyond the tracks where it overturned, landed on its top and burst into flames.