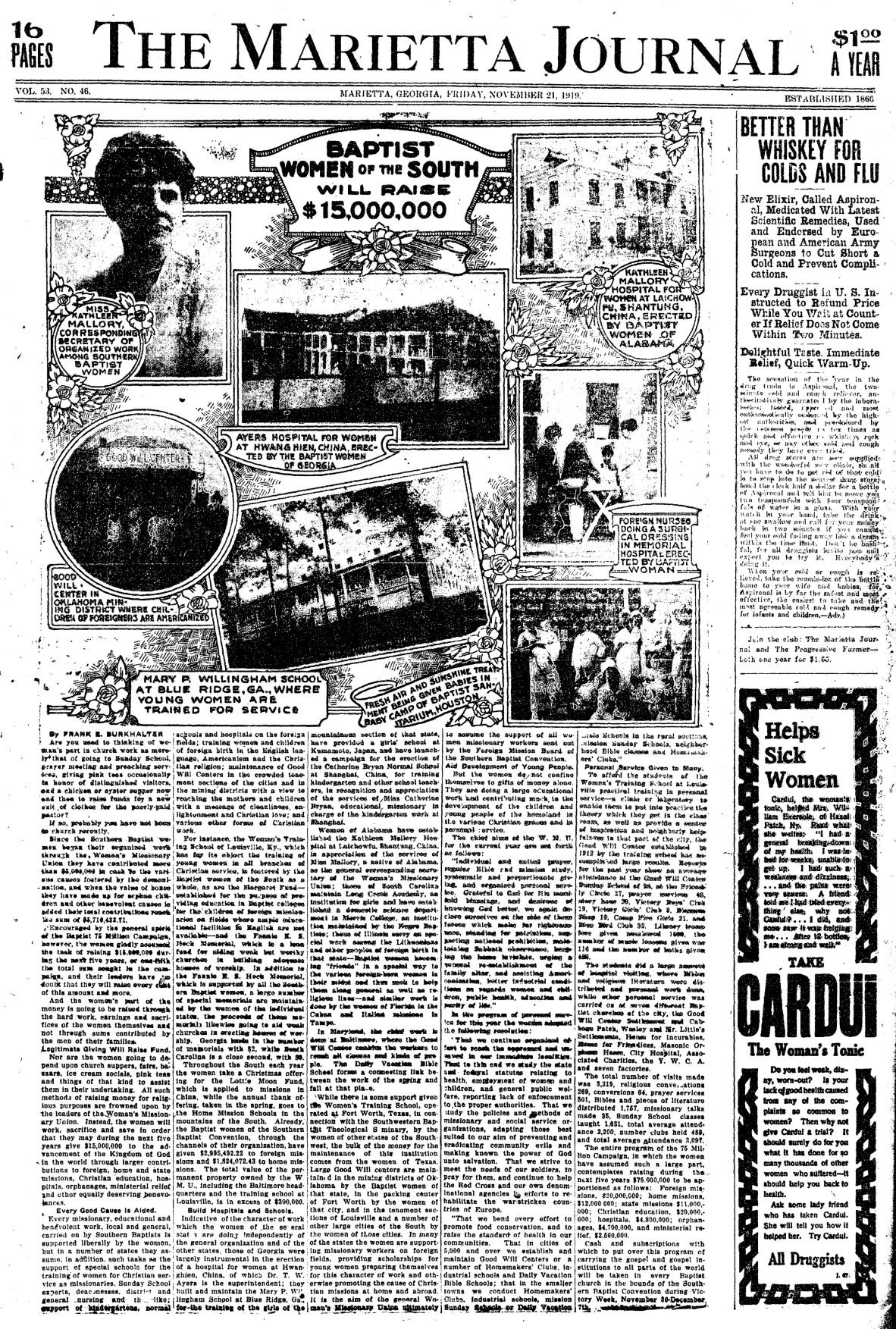 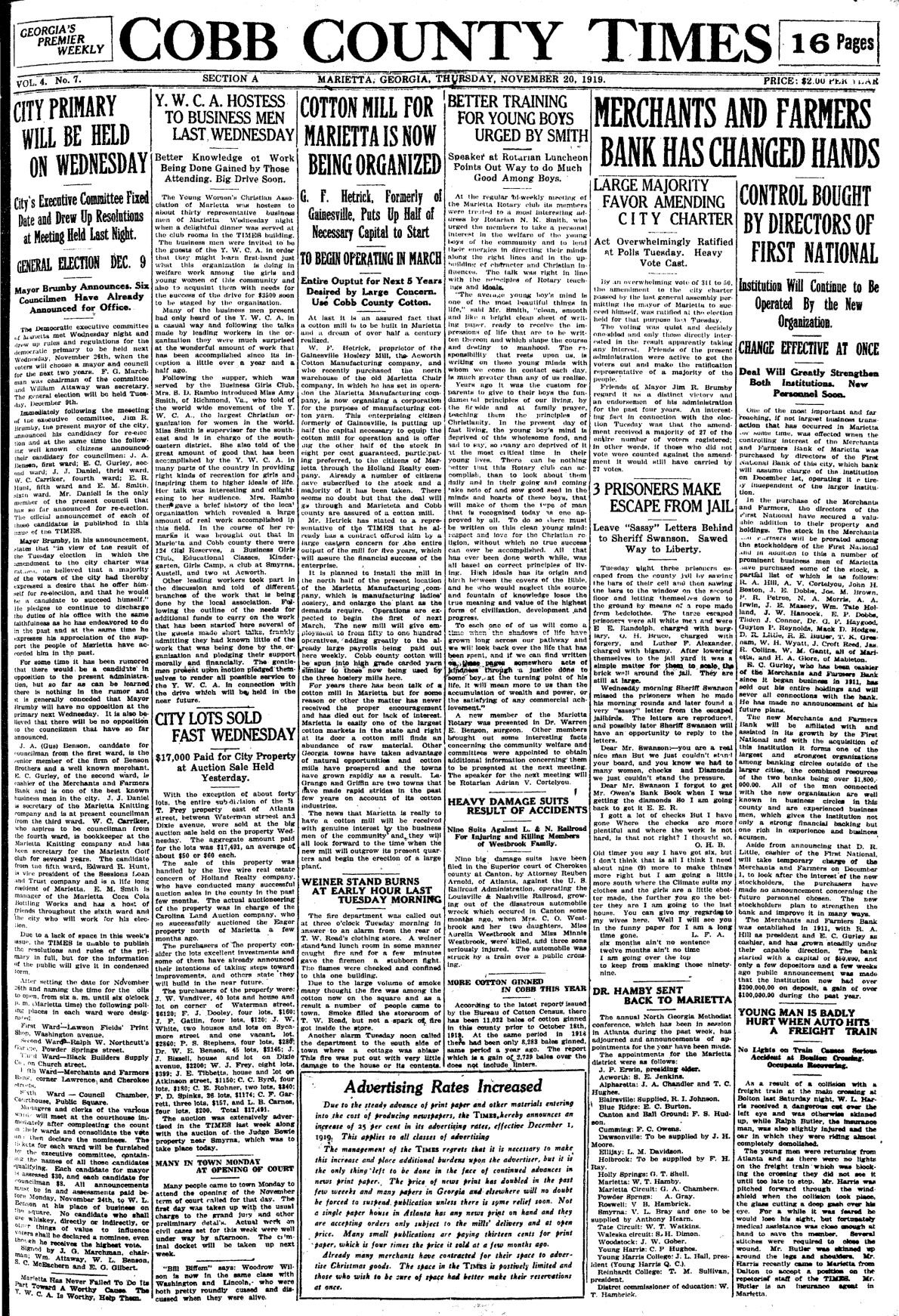 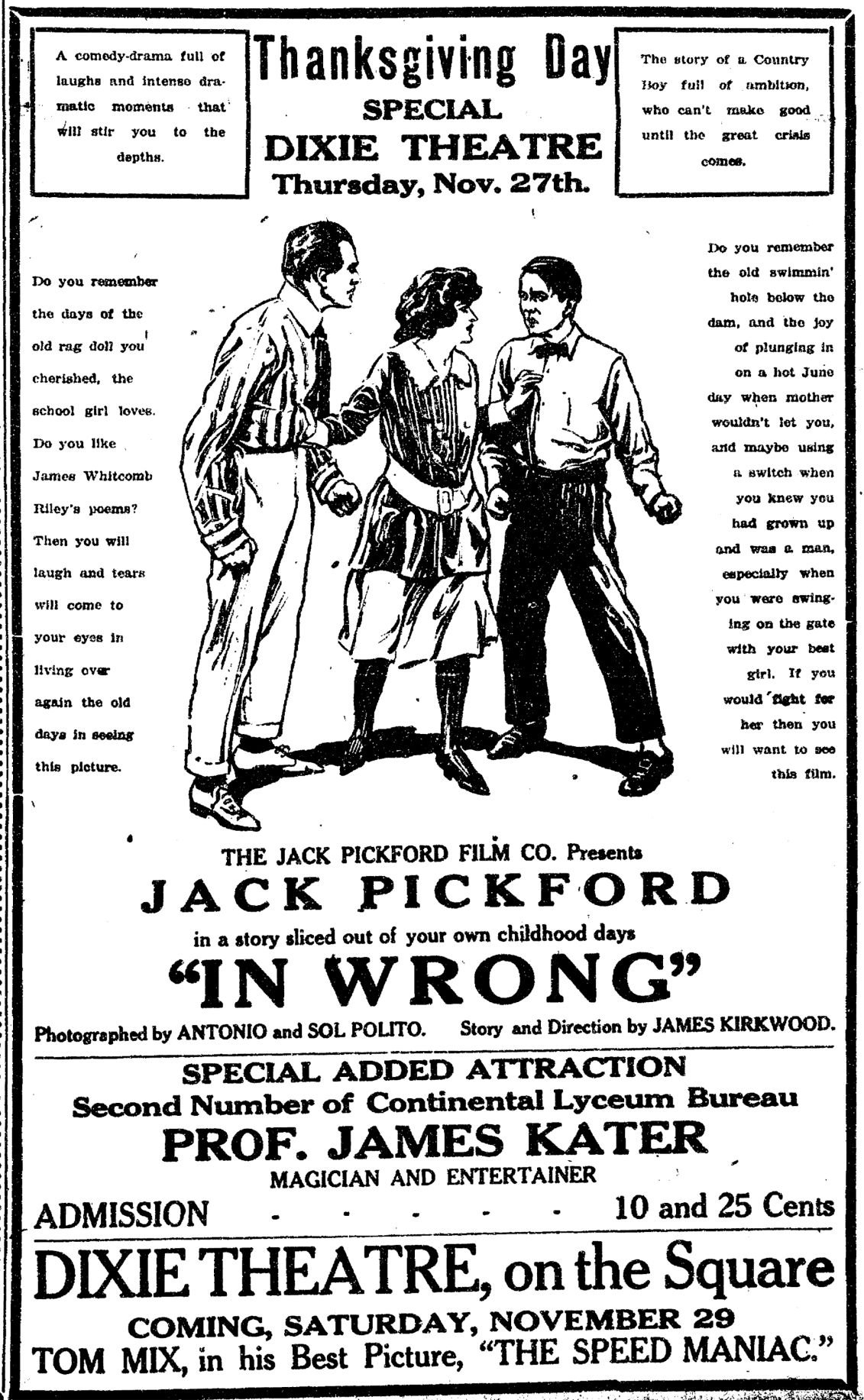 From the Thursday, Nov. 20, 1919, edition of The Cobb County Times. Pictured is an advertisement for the Jack Pickford Film Company’s “In Wrong” starring Jack Pickford that would be shown on Nov. 29, 1919, as a Thanksgiving Day special at the Dixie Theatre in Marietta.

From the Thursday, Nov. 20, 1919, edition of The Cobb County Times. Pictured is an advertisement for the Jack Pickford Film Company’s “In Wrong” starring Jack Pickford that would be shown on Nov. 29, 1919, as a Thanksgiving Day special at the Dixie Theatre in Marietta.

This week’s Time Capsule looks at a cotton mill, a jail escape, fundraisers, a Vietnam Santa Claus and an earthquake.

The Thursday, Nov. 20, 1919, edition of The Cobb County Times reported that a cotton mill was being organized for the city of Marietta.

W.F. Hetrick, the proprietor of the Gainesville Hosiery Mill and the Acworth Cotton Manufacturing company and who had recently purchased the north warehouse of the old Marietta Chair company, was organizing the Marietta Manufacturing company. The company was being organized to manufacture cotton yarn in the city.

Hetrick was listed as putting up half of the capital necessary for the venture and seeking investors for the other half.

“A weiner stand and lunch room” in the rear of T.W. Read’s Clothing Store on the Square caught fire at 3 a.m. the Tuesday before. The firemen fought “the stubborn fire” and managed to contain it to one building. The story said “due to the large volume of smoke,” many residents thought the fire was in the cotton bales brought to the Square.

Also that Tuesday night, three prisoners were reported as having escaped from the county jail by sawing through the bars of their cell and the window on the second floor. The men let themselves down to the ground with a rope made from bedclothes, then they scaled the brick wall around the jail.

The next day, Sheriff W.E. Swanson discovered the prisoners were missing and found “a very ‘sassy’ letter” from each of the men.

The wanted men were E.E. Randolph, charged with burglary; O.H. Bruce, charged with forgery; and Luther P. Alexander, charged with bigamy. In Alexander’s letter, he stated that he was “going a little more south where the climate suits my clothes and the girls are a little better made.”

A collision with a freight train at the main crossing at Bolton was reported as happening the Saturday night before. The result was a completely demolished car and the following injuries — W.L. Harris had a “dangerous cut” over his left eye and was “skinned up,” while insurance man Ralph Butler was only slightly injured.

The Merchants and Farmers Bank was reported as being bought by the directors of the First National Bank of Marietta.

Holland Realty Company of Marietta ran an ad announcing the following properties for sale — a five-room home on Dixie Avenue for $1,650, an eight-room home on Powder Springs Street for $3,500 and a six-room home on Holland Street for $2,150.

The front page of the Friday, Nov. 21, 1919, edition of The Marietta Journal held a half-page photograph collection and a half-page story about how the Baptist women of the South were going to raise $15 million for the church. The article discussed fundraising across the South and how Southern Baptists always aided in good causes, and built hospitals and schools.

A full page ad on Page 3, sponsored by several prominent Marietta businesses, announced that Marietta needed a greater Young Women’s Christian Association and that $3,500 was going to be sought through fundraising.

The ad said that “the girls of today are the mothers of tomorrow, and upon these girls will depend, to a far-reaching extent, the Marietta of tomorrow.” It went on to say that the YWCA “exerts its influence not by preaching, not by creed or dogma, but by combining pleasant recreation with spiritual guidance, in such a way as to make the learning of right easy.”

In the Sunday, Nov. 16, 1969, Marietta Daily Journal it was reported that Lockheed-Georgia Company officials were taking a look at their position following an Air Force announcement the Friday before on the cut in military production of the C5A super-transport by one-third. The Air Force was only going to buy 81 of the planes instead of the 115 that had been contracted three years earlier.

Also that day, Pfc. Kenneth H. McElreath, a Marietta GI stationed in Vietnam, was reported as wanting to make Christmas unforgettable for the children of the war-torn mountain villages around Plieku, where he was stationed. McElreath was asking Marietta and Cobb County residents to send him toys, food, clothing and household items that he would like Santa Claus to distribute to the villagers in Vietnam.

The Thursday, Nov. 20, 1969, paper reported that “slippage in the underground rock structure of the ‘stable’ Eastern United States” caused an earthquake in eight states, including Georgia, the night before. The epicenter of the 4.75 quake was 60 miles west of Roanoke, Virginia.