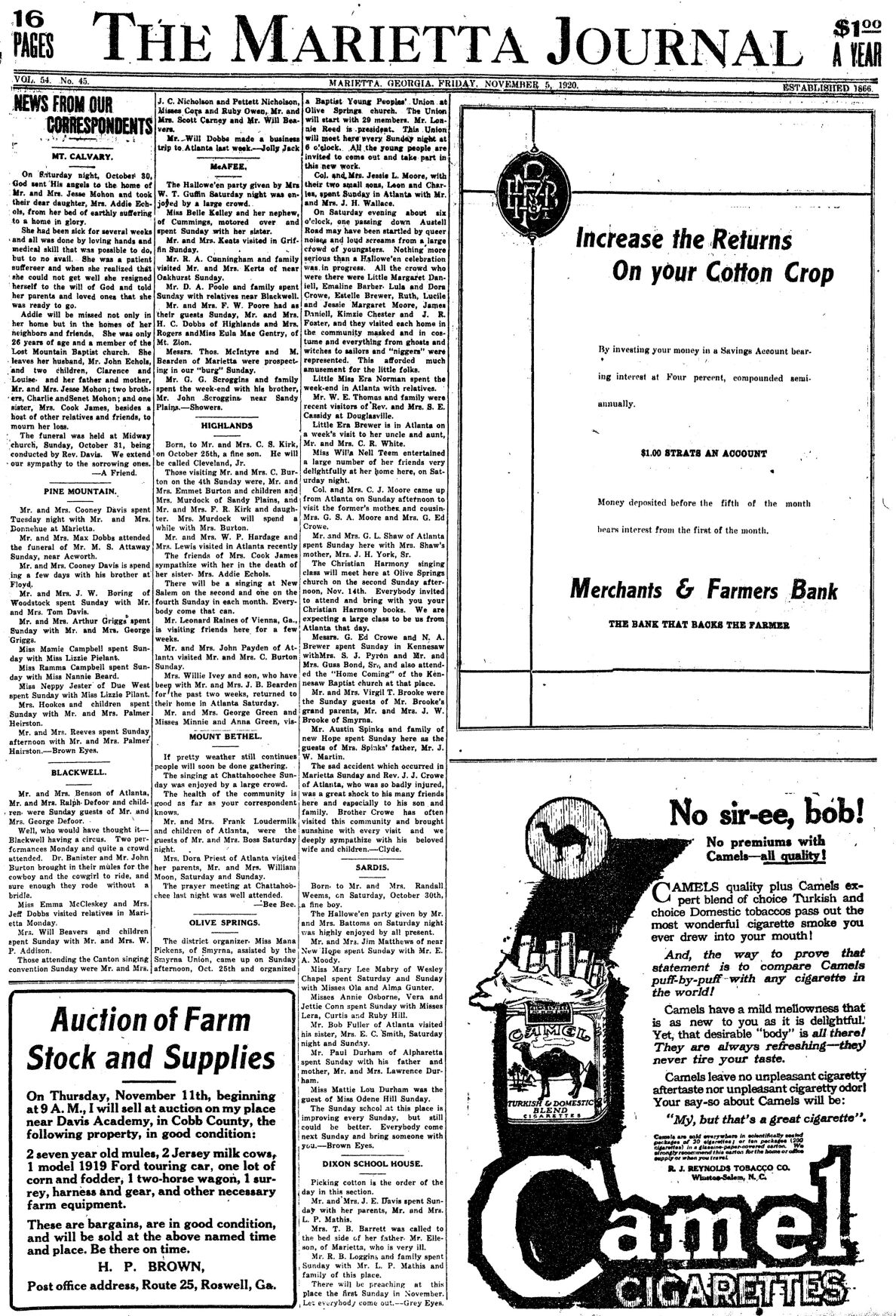 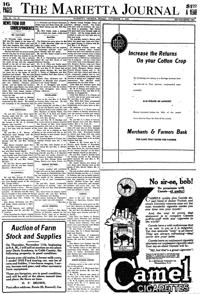 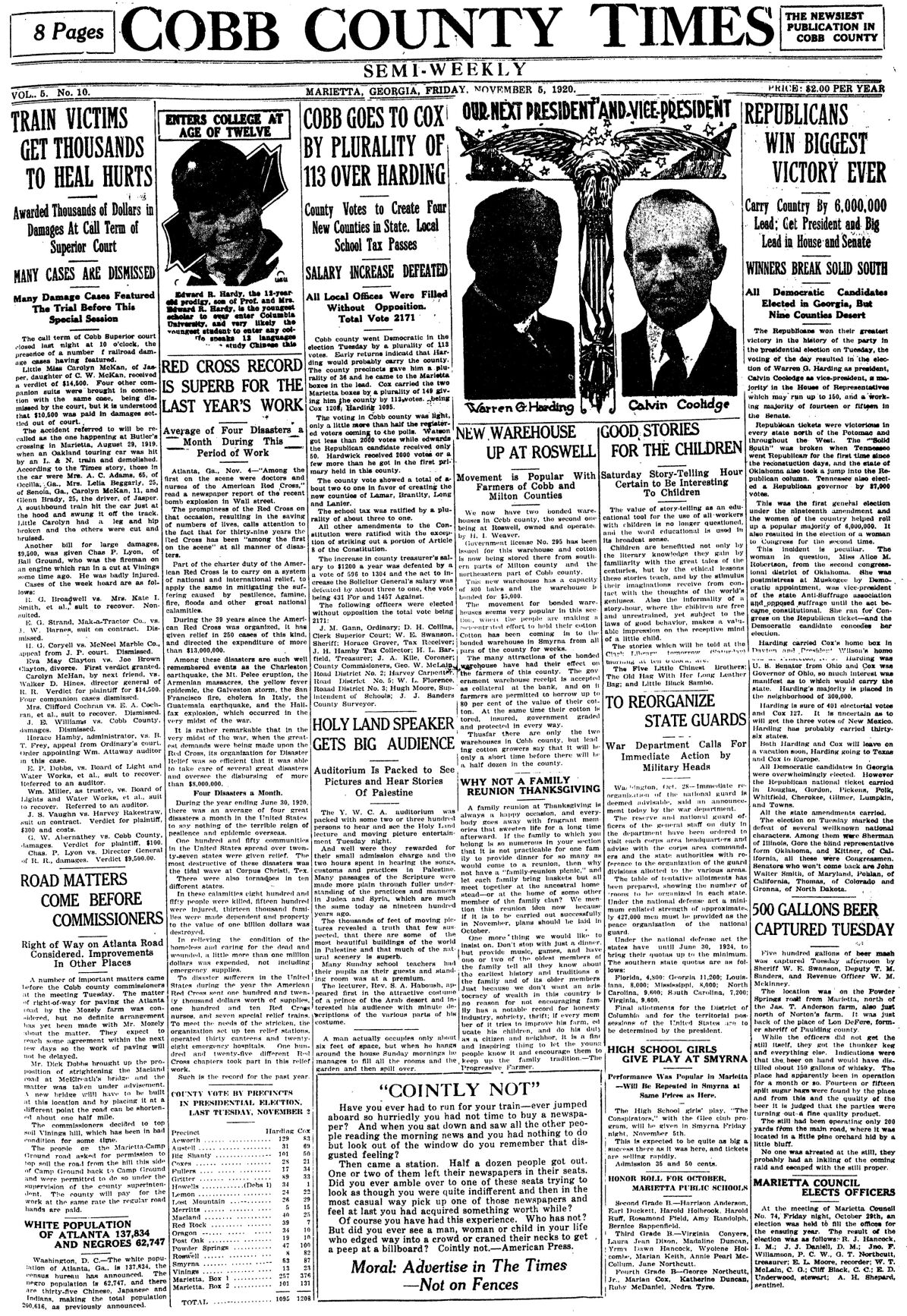 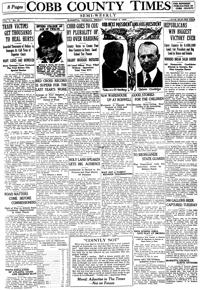 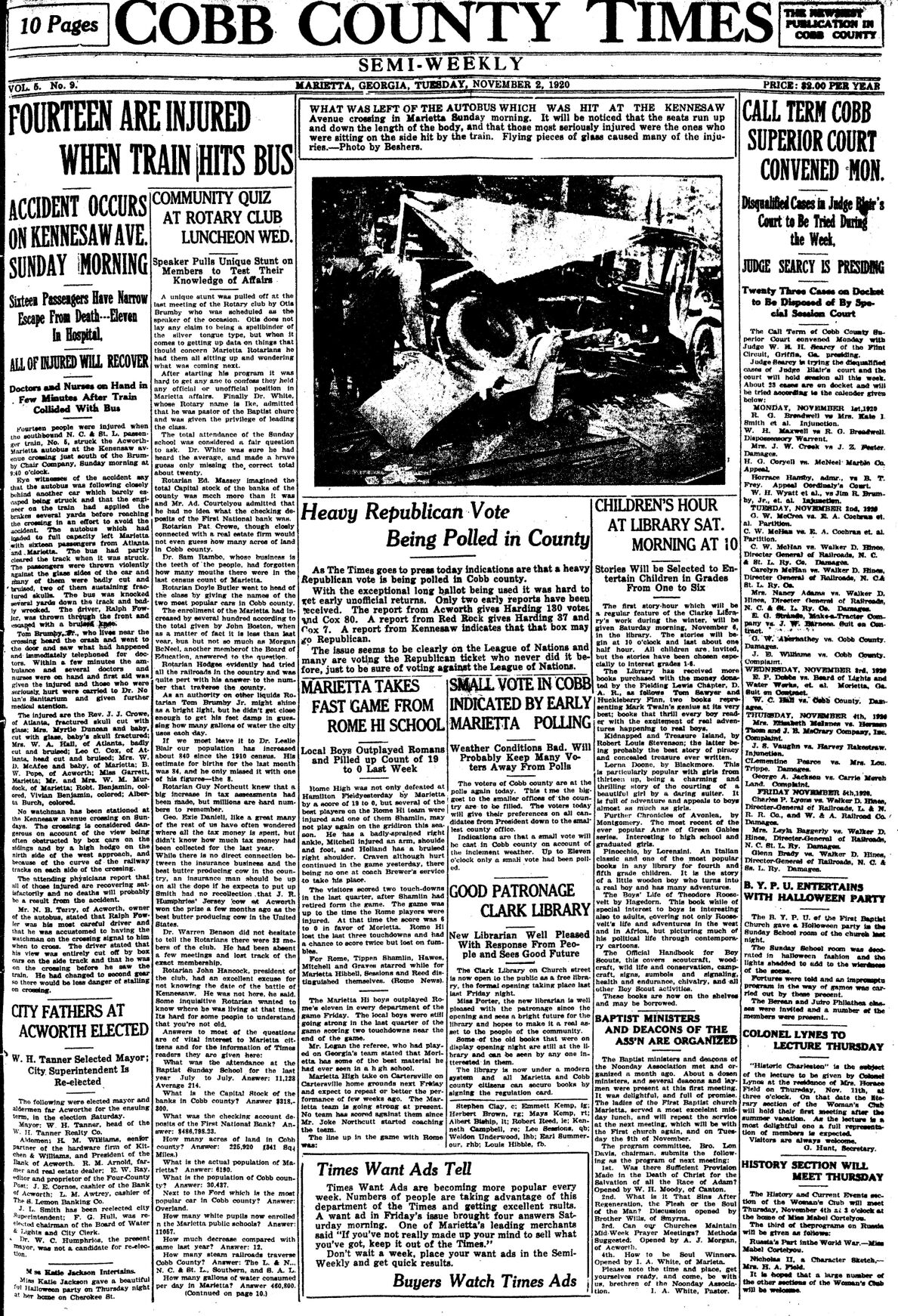 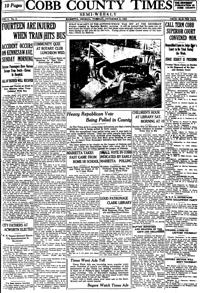 The Tuesday, Nov. 2, 1920, edition of The Cobb County Times reported that a bus was hit by a Nashville, Chattanooga & St. Louis passenger train at the Kennesaw Avenue crossing in Marietta the Sunday before.

Fourteen of the 16 passengers were injured when the No. 6 train struck the Acworth-Marietta bus just south of the Brumby Chair Company. Eye witnesses said the bus was “following closely” behind another car that barely escaped being hit and that the train’s engineer tried to apply the brakes several yards before reaching the crossing.

Passengers inside were said to have been “thrown violently against the glass sides of the car.” Many were badly cut and bruised, with two of the injured also sustaining fractured skulls. The bus was knocked several yards down the tracks and was wrecked. Ralph Fowler, the driver, was thrown through the front and suffered a bruised knee.

The Friday, Nov. 5, 1920, edition of The Cobb County Times reported that the Cobb Superior Court closed the night before at 10 p.m. after several railroad damages cases were heard.

In one case, Carolyn McKan, 11, of Jasper received a verdict of $14,500 for an accident that happened at Butler’s Crossing in Marietta on Aug. 29, 1919, when an Oakland touring car was hit by a Louisville & Nashville train and demolished. While others in the car were cut and bruised, Carolyn suffered a broken leg and hip.

Another high dollar case involved $9,500 granted to Chas P. Lyon of Ball Ground, who was “the fireman on an engine which ran in a cut at Vinings some time ago” and was badly injured.

Five hundred gallons of beer mash was captured the Tuesday before by Sheriff W.E. Swanson, Deputy T.M. Sanders and Revenue Officer W.M. McKinney. The capture was made on Powder Springs Road in Marietta, north of the Jas. T. Anderson farm and just behind the place of Lon DeFore, former sheriff of Paulding County.

In the Thursday, Nov. 1, 1945, edition of the The Marietta Daily Journal, there was a United Press International story about how the State of Georgia “closed its account” with Robert Elliott Burns. The 55-year-old man made famous as the “Fugitive From a Georgia Chain Gang” was granted a commutation of sentence and had his full civil rights restored by Georgia Gov. Ellis Arnall.

Twenty-three years earlier, Burns escaped from a chain gang after being sentenced to 6-10 years for his part in a hold-up that netted $5.85. He was a hungry, young veteran of World War I at the time. Burns escaped after three months on the chain gang and was free until 1930. He was caught in Chicago and returned to Georgia, but after a few months escaped again to New York. There Burns wrote his book, “I’m A Fugitive From a Georgia Chain Gang,” and became famous.

In the Sunday, Nov. 1, 1970, edition of the paper, angry Cobb County political leaders fired off “stinging criticism” at U.S. Secretary of Transportation John Volpe, who ordered a freeze on construction of the final leg of Interstate 75 between Marietta and Adairsville. The action came after requests from Dick Fullerton, a Republican candidate for the Seventh District congressional seat held by John W. Davis, and the Georgia Conservancy. Fullerton and the Conservancy attacked the scheduled I-75 route which was going to cut across a portion of Red Top Mountain Park and destroy the “natural beauty” of the area. Both urged that the final I-75 leg be redesigned to go west of Cartersville, thus bypassing the Red Top Mountain-Lake Allatoona park area.

Al Burruss and Romeo Hudgins were reported in the Tuesday, Nov. 3, 1970, paper as being presented lifetime memberships in the Marietta Jaycees at a special “old-timers” dinner. Tommy Anderson, chairman of the project for the Jaycees, made the presentations. Only six of the honorary lifetime memberships had been given at the time. Burruss was a state representative and president of Tip Top Poultry Inc. Hudgins was the Georgia chairman for the U.S. Savings Bonds office.