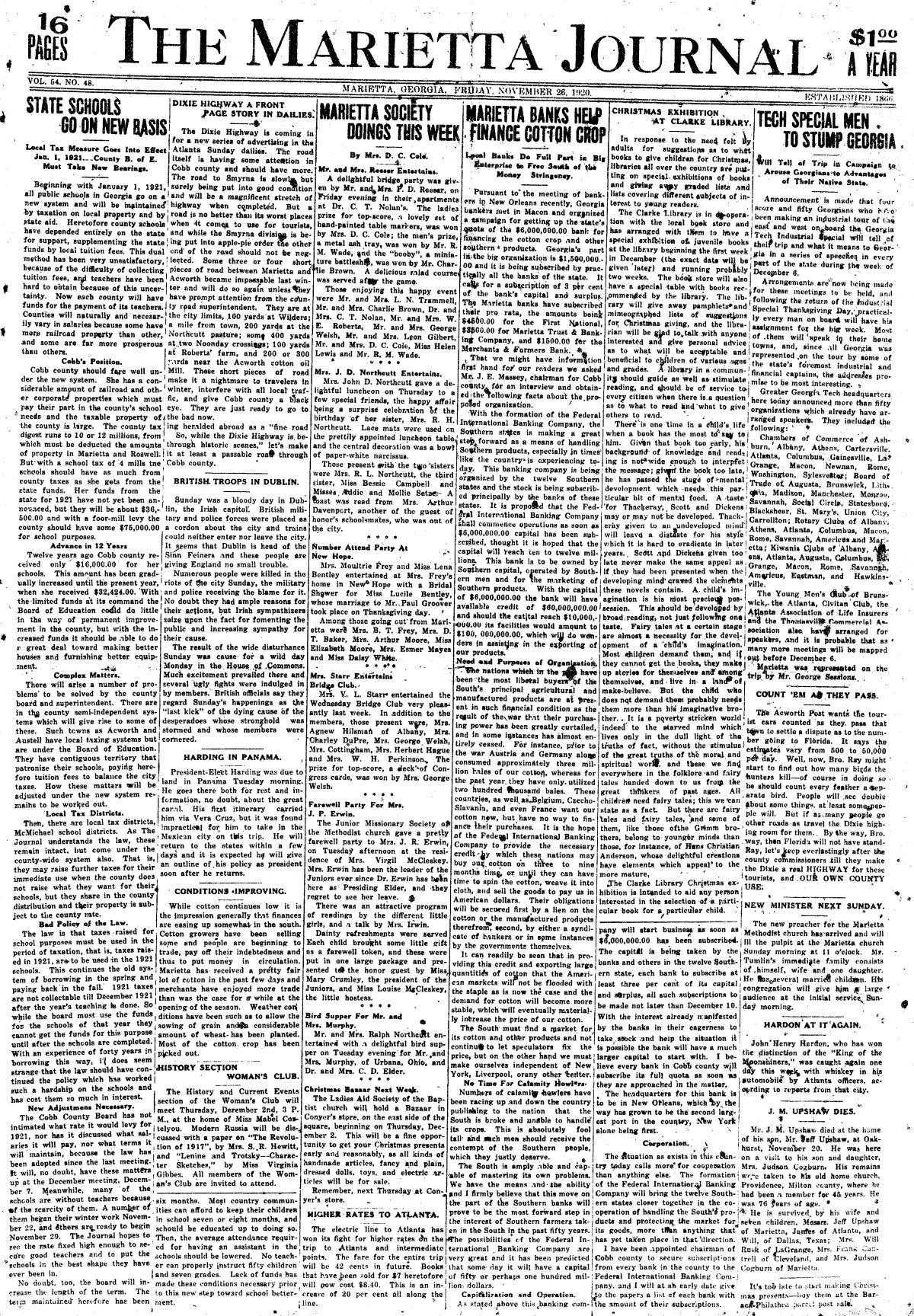 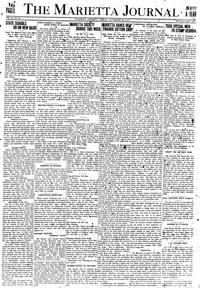 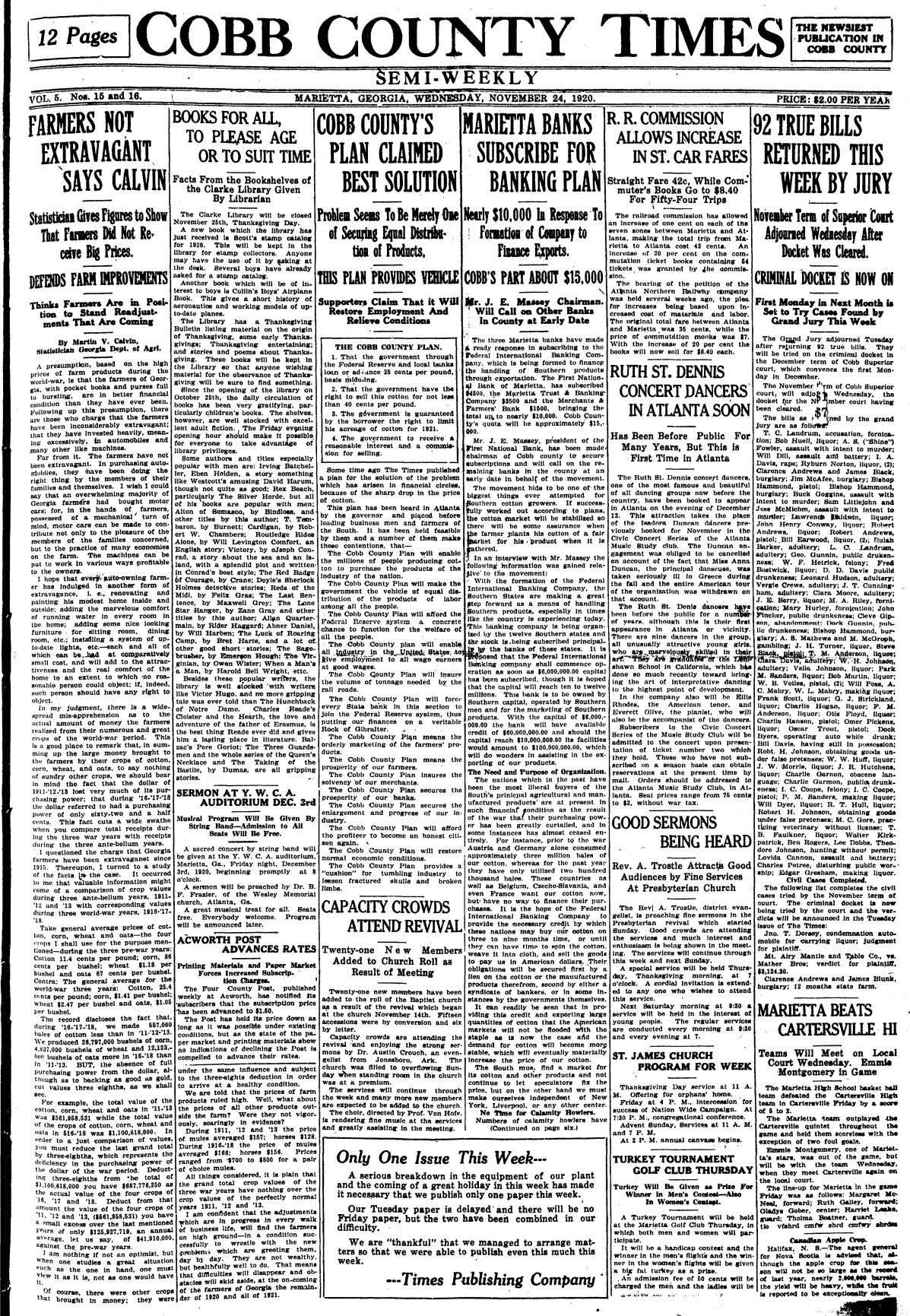 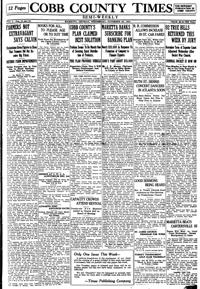 The Cobb County Times instead of being a twice a week paper, published a single edition the week of Thanksgiving on Wednesday, Nov. 24, 1920.

In that paper, three Marietta banks were reported as having subscribed to the Federal International Banking Company, which was being formed to finance the handling of Southern products through exportation. The First National Bank of Marietta subscribed $4,500, the Marietta Trust & Banking Company $3,500 and the Merchants & Farmers’ Bank $1,500, bringing the total up to nearly $10,000. Cobb County’s quota was estimated at about $15,000.

In the “News From Our Correspondents” column, the East Oak Grove correspondent had an entry that rings the same today. It said:

“The presidential election is over and passed, we should now begin to look to the future for better times and quit grumbling at ourselves and our shadows. We all know that we don’t get suited every time and in every contest somebody is beaten.”

The Dixie Flyer, a passenger train on its trip from Chattanooga to Atlanta, was reported as having hit two vehicles the Thursday before. In one incident, the train struck a carrier truck in Dalton, seriously injuring two people and completely wrecking the truck. In Marietta, it struck and badly wrecked a Ford car on the Goss Street crossing. The driver was forced to jump from the car, but was not injured.

The Friday, Nov. 26, 1920, edition of The Marietta Journal reported that John Henry Hardon, who had “won the distinction of the ‘King of the Moonshiners,’” was caught earlier in the week with whiskey in his automobile by Atlanta police officers.

In the Monday, Nov. 26, 1945, edition of The Marietta Daily Journal were the following items:

♦The Allatoona dam project near Cartersville was reported as being rejected by the House Appropriations Committee and would not be built during 1946. Both the War Department and the Budget Bureau recommended that it be included in the 1946 deficiency appropriation bill, but the committee scratched it off the list along with others totaling $128.5 million dollars in flood control and rivers and harbors projects that had been earmarked for immediate construction by the Army engineers.

♦Thirsty burglars broke into the Cherokee Lunchroom the Friday before and stole between $15-$20 in nickels and dimes. During the burglary, the thieves — who had come in through a broken skylight — stopped long enough to also drink four bottles of beer.

A fire was reported in the Tuesday, Nov. 27, 1945, paper as having destroyed a warehouse in the rear of the Keith Grammar School on Haynes Street the night before. The report said that “droves of people and cars made it almost impossible for firemen to reach the scene and many were forced to drive their cars on sidewalks and yards to make way for fire engines.” The warehouse, full of peanut hay, was a total loss, estimated at $2,200.

Two people were reported in the Wednesday, Nov. 27, 1945, paper as being killed and another seriously injured at 3:30 a.m. the night before when their car plunged off the railroad trestle over the Four-Lane Highway, now called U.S. Hwy. 41, just north of Marietta in dense fog. John H. Stephen Jr., a recently discharged World War II soldier from Smyrna, and Mrs. Ruby Cook of Marietta were killed instantly. James Cochran of Smyrna was seriously injured and was reported as passing later in the week.

In the Friday, Nov. 30, 1945, paper it was reported that W.H. Cagle, CM-2C, of Marietta, served during WWII on the destroyer USS Kimberly, which saw service in both the Atlantic and Pacific. The Kimberly was escorting the battleship Missouri when she left Japan to return to the States. While surrender terms were being signed on the battleship, the destroyer stood by during the ceremonies. The Kimberly was credited with knocking down five Japanese planes while in action in the Pacific and taking part in operations in the Gilberts, Kuriles, Philippines and at Okinawa.