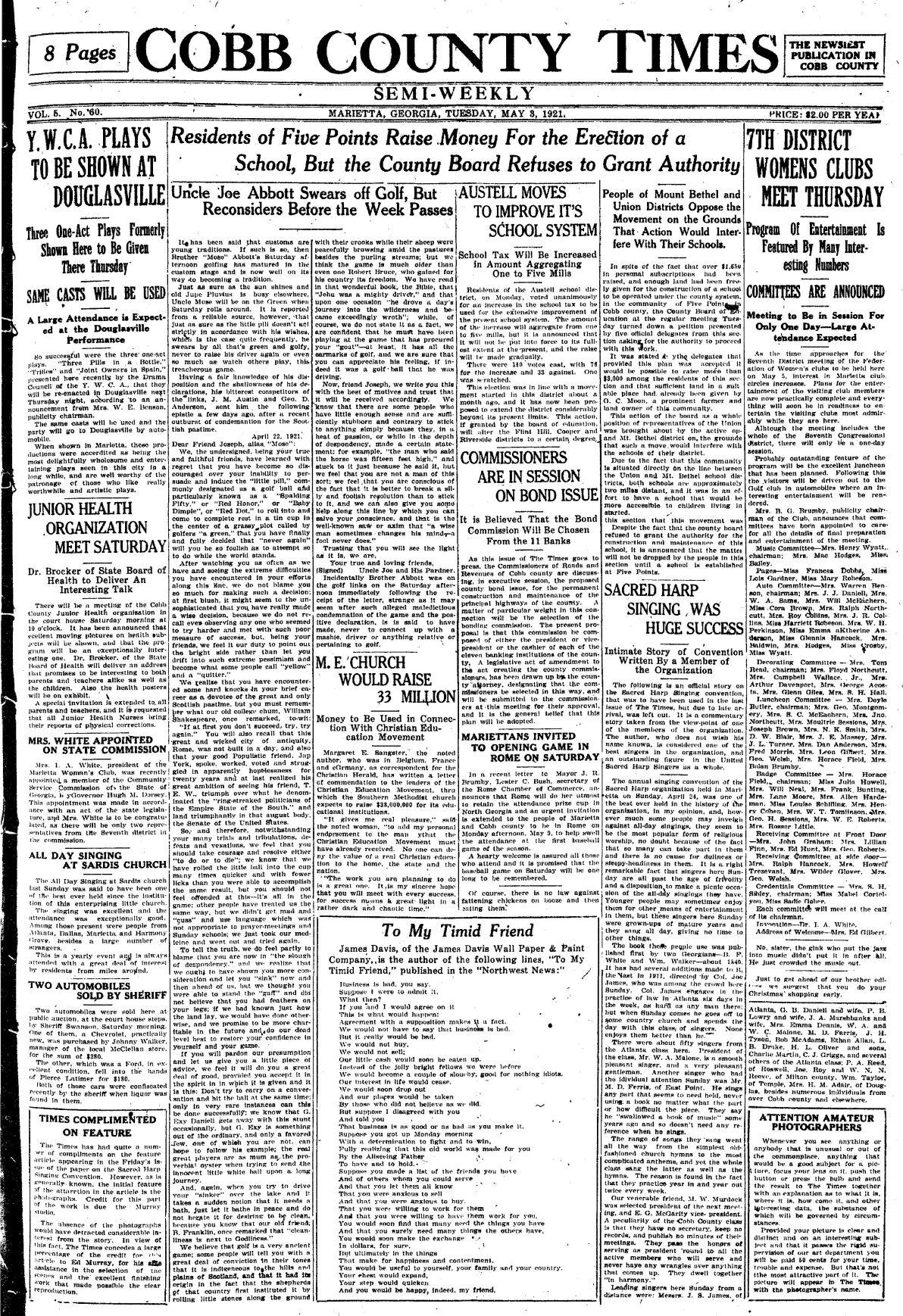 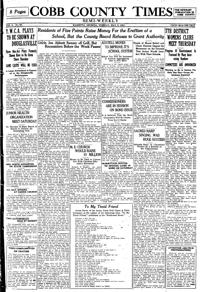 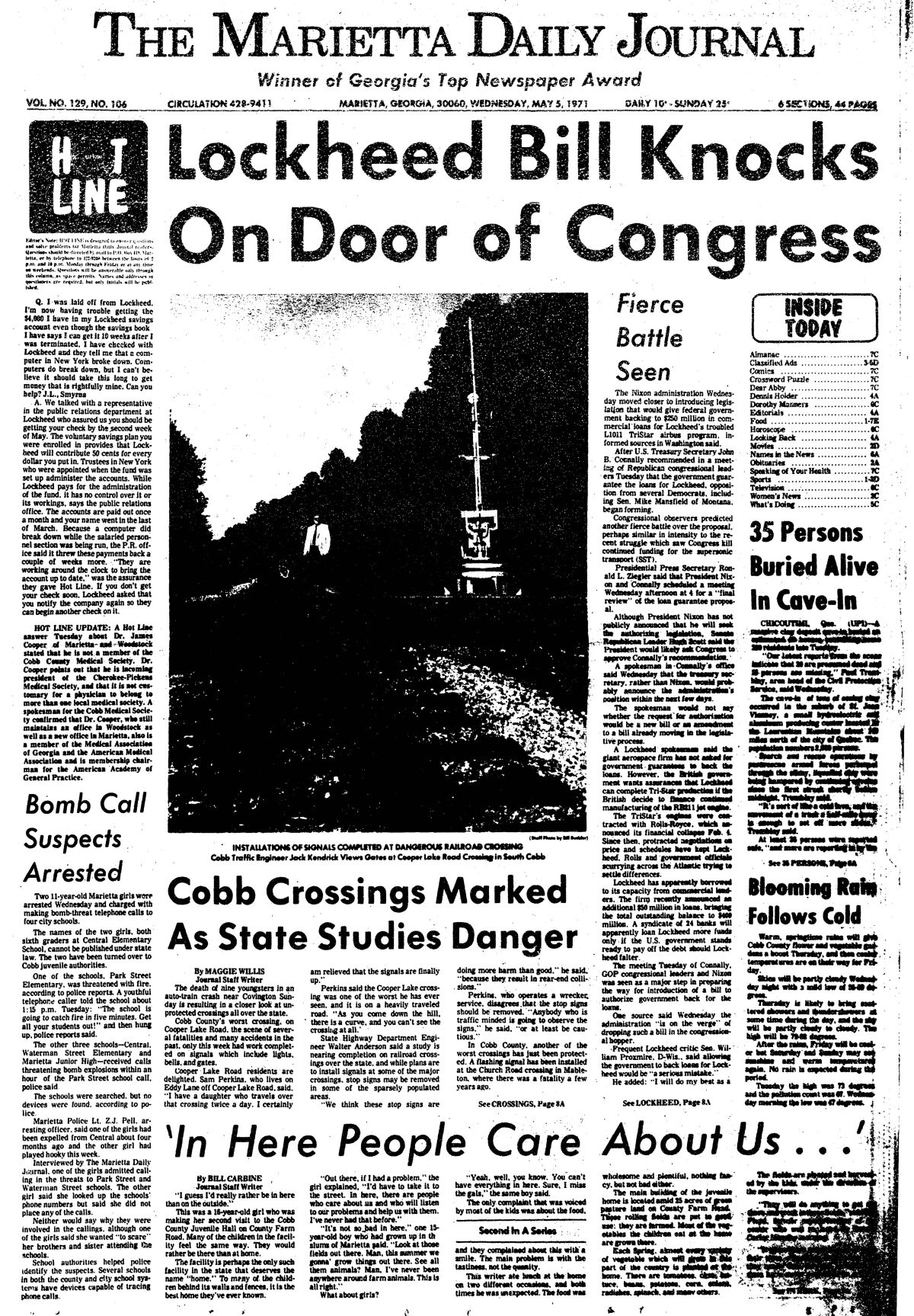 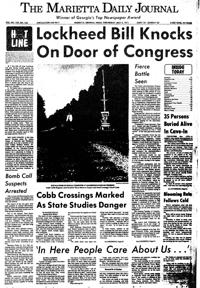 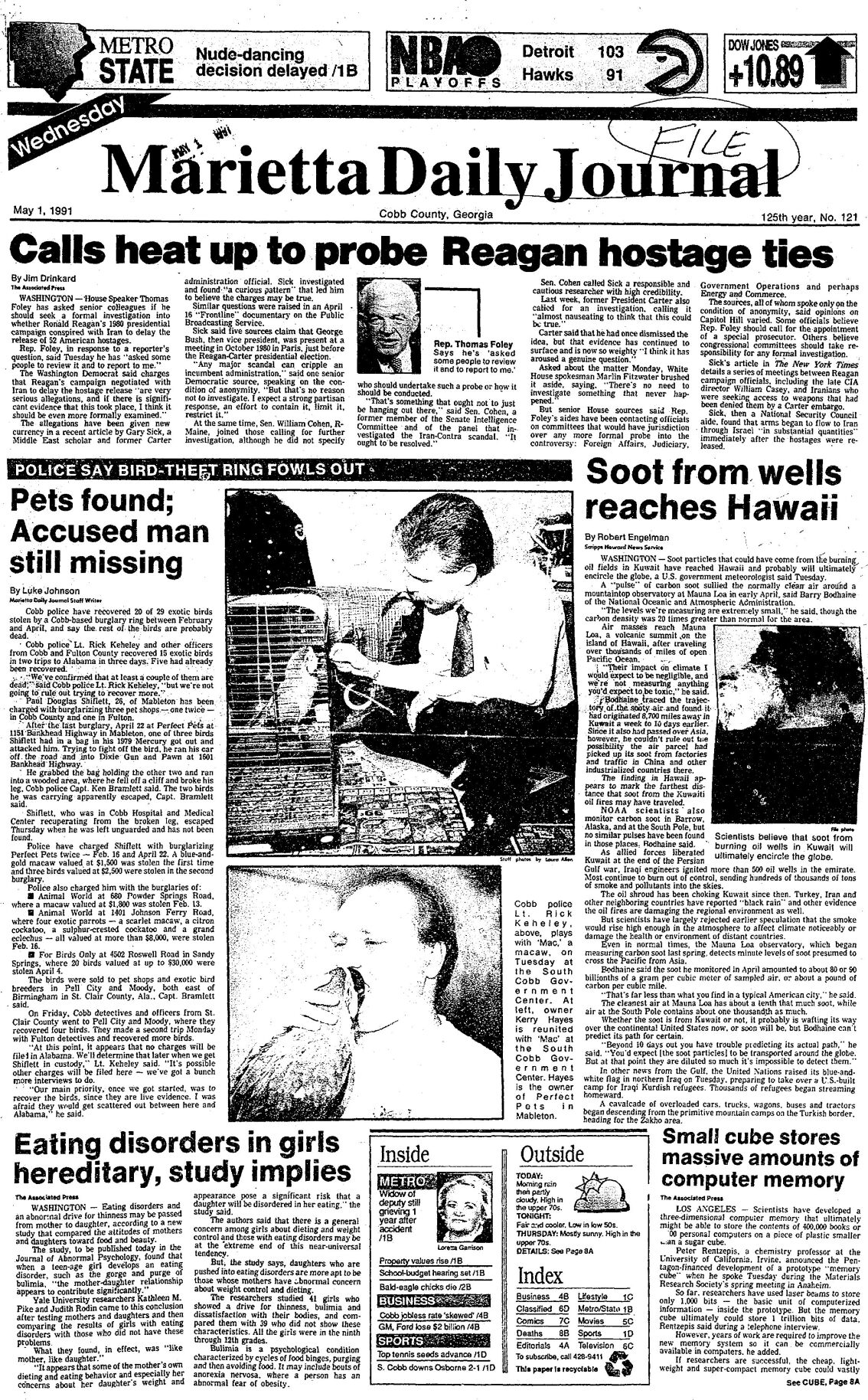 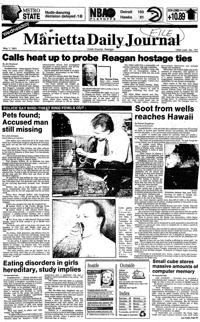 The Friday, May 3, 1921, edition of The Cobb County Times reported on the public auction of two recently confiscated liquor transporting automobiles. The cars were sold on the courthouse steps by Sheriff Swanson. One was a new Chevrolet purchased by Johnny Walker, manager of the local McClellan store, for $280. The other, a Ford in excellent condition, was bought by Pierce Latimer for $180.

The Monday, May 6, 1946, Marietta Daily Journal reported that partial trolley service on the Atlanta Northern Railroad, between Marietta and Atlanta, had resumed that day as Georgia Power Company officials announced the end of a six-day strike of 1,400 street car and bus operators. Officials said that due to the layoff, tracks on the Marietta-Atlanta route were not in “A-1 shape,” so full service would not resume until the track was patrolled by testing equipment.

Georgia Power announced as part of the settlement that operators were granted a wage increase of 18.88-cents per hour to a top pay rate of $1.07 per hour. The pension issue, the toughest of all that blocked the settlement for days, was settled by an agreement that the union would establish a separate pension fund in addition to the regular company pension.

The Monday, May 3, 1971, edition reported that MDJ photographer Ken Hawkins was injured in Washington that day when a fragmentation bomb exploded in front of him and slivers were lodged in his eye. Hawkins was in the nation’s capital photographing the antiwar demonstrations. He said the bomb was one of several that had been placed or thrown by demonstrators. He was treated at a dispensary and told he would regain vision in his eye in a day or so. Later that morning, Hawkins reported that Washington Mayor Walter Washington had announced his city was open, traffic was flowing and the government was working. This was in spite of the fact that militant antiwar demonstrators were still causing havoc throughout the District.

The Nixon administration on Wednesday, May 5, 1971, was reported as moving closer to introducing legislation that would give federal government backing to $250 million in commercial loans for Lockheed’s troubled L1011 TriStar airbus program. After U.S. Treasury Secretary John B. Connally recommended in a meeting of Republican congressional leaders the day before that the government guarantee the loans for Lockheed, opposition from several Democrats, including Sen. Mike Mansfield of Montana, began forming. Congressional observers predicted another fierce battle over the proposal that would be similar in intensity to the then-recent struggle where Congress killed funding for the supersonic transport.

Also that day, it was reported that two 11-year-old Marietta girls were arrested and charged with making bomb-threat calls to four Marietta City Schools. Park Street Elementary was threatened with being set on fire. The other schools, Central Elementary, Waterman Street Elementary and Marietta Junior High, received calls threatening bomb explosions within an hour of the Park Street school call. The arresting officer said that one of the girls had been expelled from Central four months earlier and the other girl had been skipping school that week.

Two longtime Cobb County physicians, Dr. Warren Bond Matthews and his wife Rosina Vincenzi, were reported in the Friday, May 7, 1971 paper as having been shot to death early that morning in their home on Lower Roswell Road. Dr. Matthews was the chief pathologist at Kennestone Hospital and his wife was the chief pathologist at Piedmont Hospital in Atlanta. Cobb police told the MDJ that they had no leads in the double murder and had ruled out robbery. One police spokesman also reported that there was no indication that the murders were “a quest for drugs” since the couple did not keep “large supplies of drugs at the house.”

In the May 1, 1991, paper it was reported that Cobb police recovered 20 of 29 exotic birds stolen by a Cobb-based burglary ring between February and April.

Paul Douglas Shiflett, 26, of Mableton was charged with burglarizing three pet shops — one twice — in Cobb County and one in Fulton.

He then grabbed the bag holding the other two birds and ran into a wooded area, where he fell off a cliff and broke his leg. The two birds he was carrying in the bag escaped. Shiflett, who was in Cobb Hospital and Medical Center recuperating from the broken leg, later escaped when he was left unguarded.