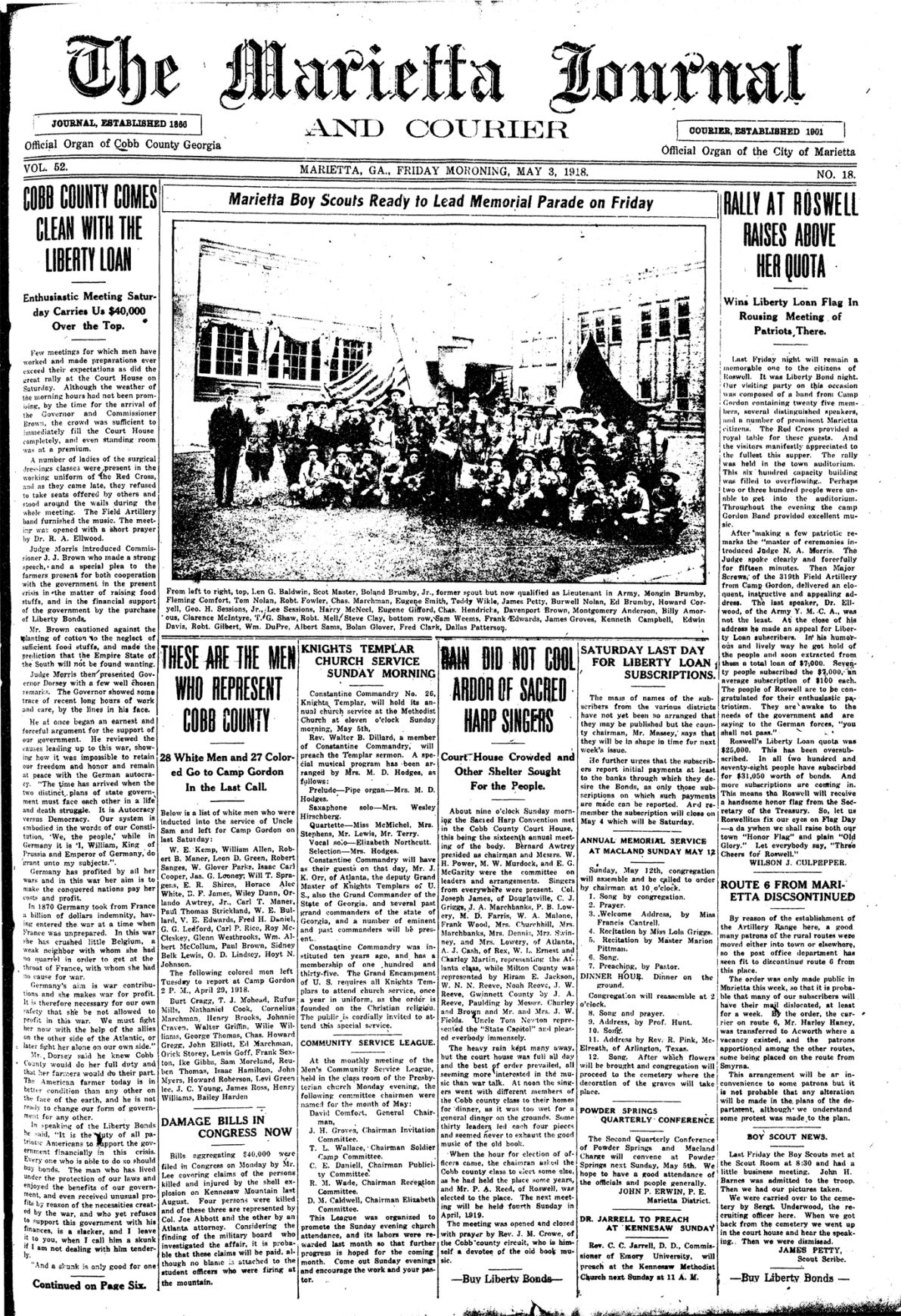 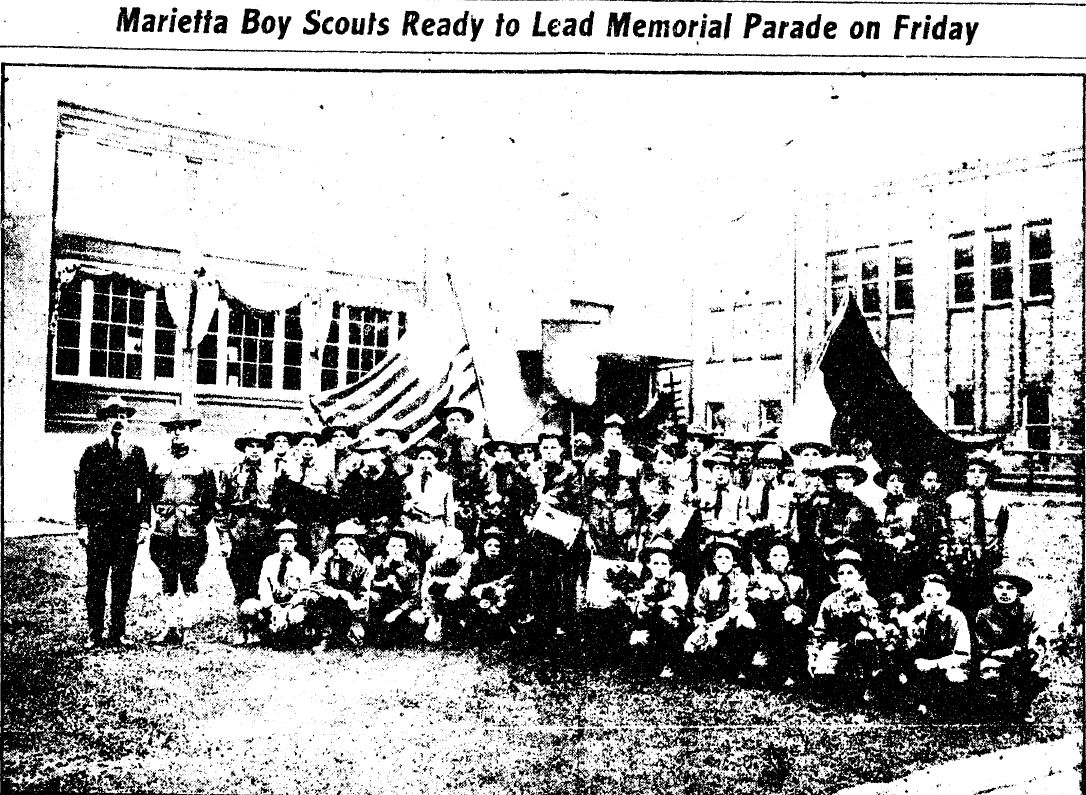 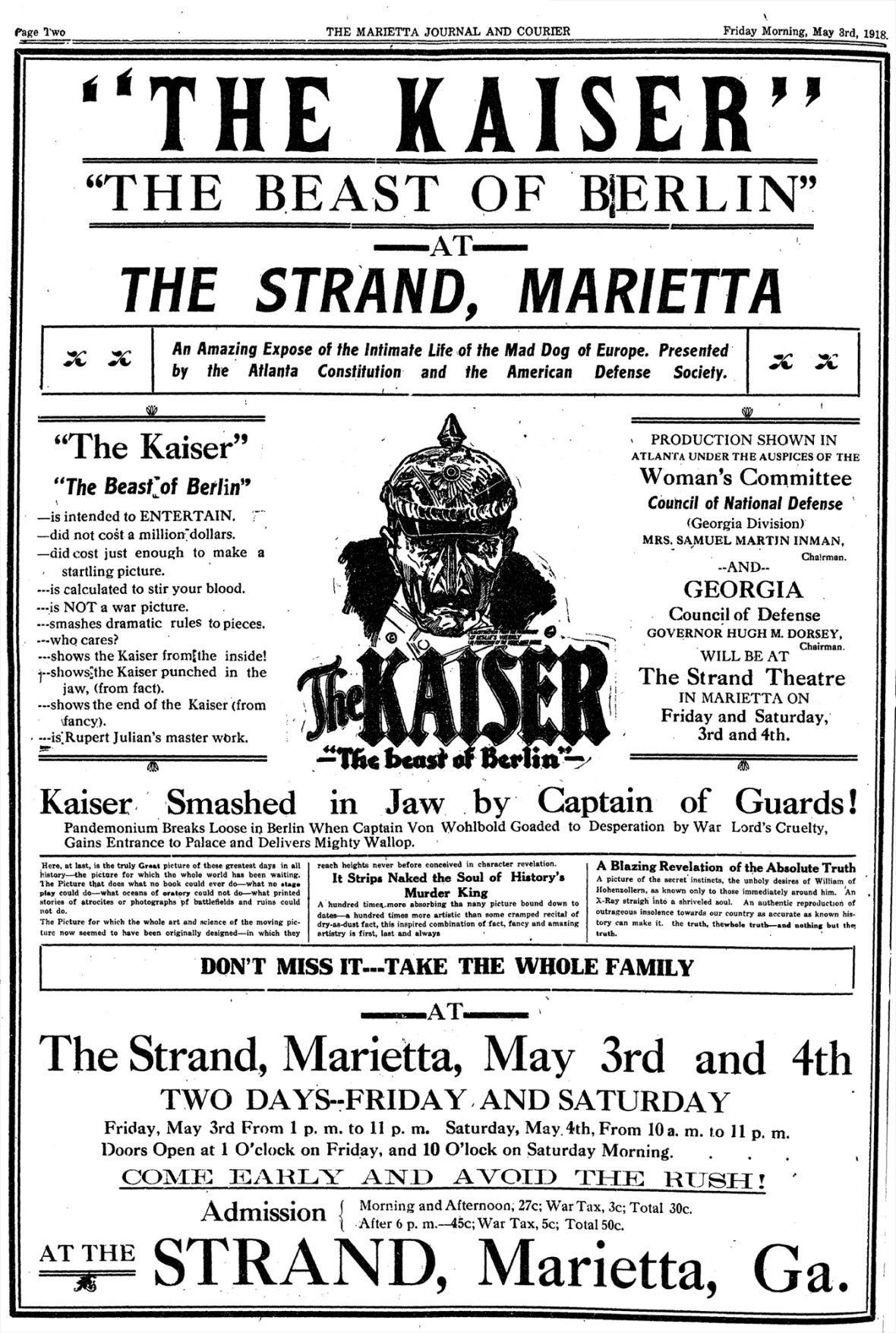 From the Friday, May 3, 1918, edition of The Marietta Journal and Courier. This is a full-page advertisement for "The Kaiser - The Beast of Berlin" being shown at the Strand Theatre in Marietta during World War I. File photo

From the Friday, May 3, 1918, edition of The Marietta Journal and Courier. This is a full-page advertisement for "The Kaiser - The Beast of Berlin" being shown at the Strand Theatre in Marietta during World War I. File photo

The Friday, May 3, 1918, edition of The Marietta Journal and Courier report-ed the names of 28 white men and 27 black men that were called to duty at Camp Gordon for World War I.

Bills worth $40,000 were reported as being filed in Congress the Monday before by Gordon Lee “covering claims of the people killed and injured by the shell explosion on Kennesaw Mountain” in August 1917. Four people were killed and three of them were being represented by Col. Joe Abbott and the fourth by an Atlanta attorney.

Berry Marchman, a black farmer near Acworth, was reported as having four of his sons drawn into WWI service and each of them appearing promptly for duty.

The Clarke Library was reported as having received from the National War Garden Commission in Washington, D.C., a consignment of the 32-page “War Vegetable Gardening and the Home Storage of Vegetables” books.

Friends and relatives of WWI Army camp soldiers were reported as being “victimized by swindlers” who were wiring or writing letters for money in the names of the soldiers. The “swindlers” were having the money sent by wire or mailed to a general delivery saying that the soldier in question had been dis-charged, which bypassed normal identification attempts and sending mail to the soldier via their company.

The Western and Atlantic Railroad Company ran a notice in the paper an-nouncing that they had petitioned the Railroad Commission of Georgia to dis-continue the regular Marietta, Kingston and Calhoun stops for Train No. 94, known as the “Dixie Flyer.”

On the Editorial page, the following opinion items appeared:

♦ “Bread for the Allies and lead for the Huns is the right way to place our products.”

♦ “Conservation of food, and all other materials, which today seem worthless, but which tomorrow may be invaluable, is now the safest and wisest patriotic work.”

♦ “We can see them coming anyway — Woman’s Suffrage and National Prohibition — but we would like to have old Georgia, the Empire of the South, on the Honor Roll.”

In the Social and Personal column:

♦ Leila Anderson, who was a Red Cross nurse with the Emory Unit at the Base Hospital at Fort McPherson, was reported as having been ordered to Camp Lee in Virginia. Anderson was one of the first nurses in Georgia to volunteer for Red Cross work and was one of two Red Cross nurses from Marietta.

♦ Ella Edwards, “the efficient bookkeeper” for the Board of Lights and Water Works, was reported as taking a job with the Southern Adjustment Bureau in Atlanta.

♦ Harold Schilling, of “the motor truck company at Camp Gordon,” was re-ported as scheduled to go to Camp Johnson to enter the Quartermasters Training Camp for Officers. Schilling was one of 63 men chosen from 500 applicants.

♦ Dr. C.T. Nolan and his daughter, Elizabeth, were expected to leave that day for a visit to Baltimore and Washington. Dr. Nolan was a delegate to the Medi-cal Council of National Defense.

In the News From Over The County column:

♦ Mount Bethel section — The correspondent reported that about 1,600 sol-diers were camped over at Mount Bethel Church from the Monday to Wednesday nights before.

♦ Austell section — Cora Belle, the 9-year-old daughter of Luke Miller, was reported as “doing her bit, in helping win this war.” Cora Belle had a war garden she prepared herself and was raising vegetables for market to buy Thrift Stamps. In 1917, she had a cotton patch that she worked by herself and raised $12. The correspondent said she could “handle a plow better than some men.”

“A mass escape attempt by prisoners in the large ‘bullpen’ cell at the Cobb County Jail” was reported as being foiled by deputies in the Monday, April 29, 1968, Marietta Daily Journal. Deputies were said to have “heard the men scrap-ing at the brick and plaster wall” working with “spoons and part of a drill.”

“A 28-foot replica of the Eiffel Tower, sidewalk cafes and an open air art gallery” were reported in the Friday, May 2, 1968, paper as bringing Paris to the Marietta High School gym for the school’s annual junior-senior prom.

In the Thursday, April 30, 1998, paper, it was reported that White House press secretary Mike McCurry had suggested “the White House could not work with House Speaker Newt Gingrich, R-east Cobb, until ‘he comes back to his senses.’” Gingrich, who had pledged the Monday before “to use every speech from now on to push the House committee investigation of (President Bill) Clin-ton’s 1996 re-election fund raising, showed no sign of easing.” The Democratic National Committee was reported as having issued a press release “heralding the return of ‘Nasty Newt.’”

Damon Poirier is the Newsroom Administrator and Historian for the Mariet-ta Daily Journal.

If you are interested in learning more about the stories that were presented in this week’s column, you can search the newspaper’s digitized microfilm ar-chives at http://nl.newsbank.com/nl-search/we/Archives/?p_product=HA-MDJ&p_theme=histpaper&p_action=keyword. NewsBank, which hosts the archives for the Marietta Daily Journal, charges a fee for retrieved articles and has various price packages. If you have any trouble with your username, pass-word or payment options, please contact NewsBank at mariettadaily@newsbank.com.

This week’s Time Capsule looks at flour, a body found in the Chattahoochee River, still busts, a strike, John Davis and Linda McCartney.

This week’s Time Capsule looks at a train wreck, a soldier’s murder and other World War I events, William Gibbs McAdoo Jr., a strike and mega …

This week’s Time Capsule looks at World War I events, a petition to fire a senator, a dynamite cap explosion, the Cobb County Times, Cobb Gene…

“Dr. Martin Luther King Jr., the nonviolent prophet of racial freedom, was assassinated by a white sniper who ‘simply faded away.’”

MDJ Time Capsule: The Week of May 10

This week’s Time Capsule looks at a car accident, a murder, World War I events, a strike, Lurleen B. Wallace, Lady Bird Johnson and a drug raid.

MDJ Time Capsule: The Week of May 17

MDJ Time Capsule: The Week of May 24

MDJ Time Capsule: The Week of May 31