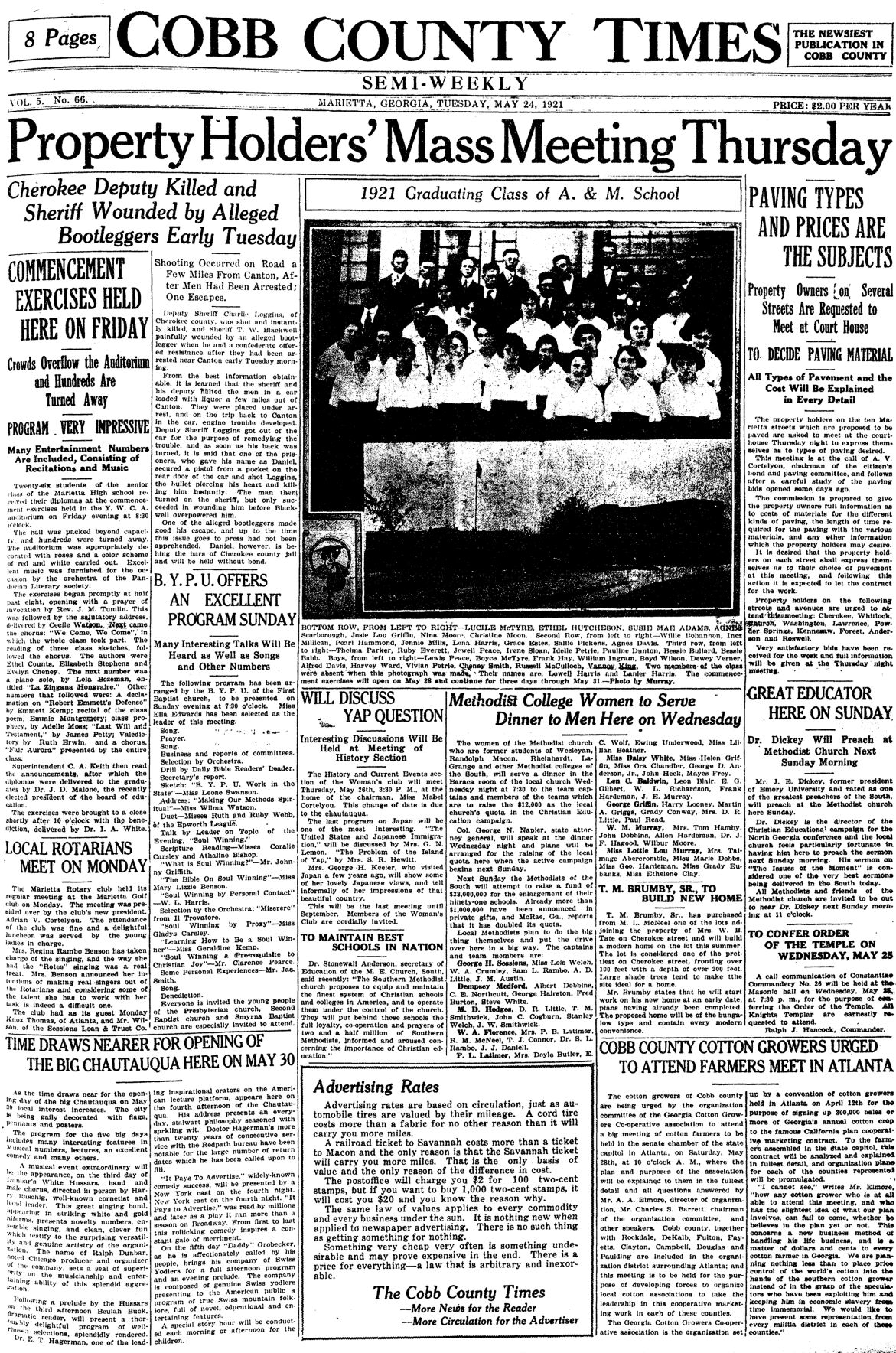 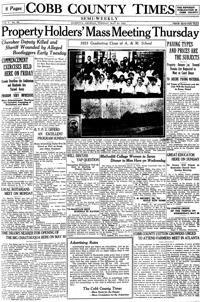 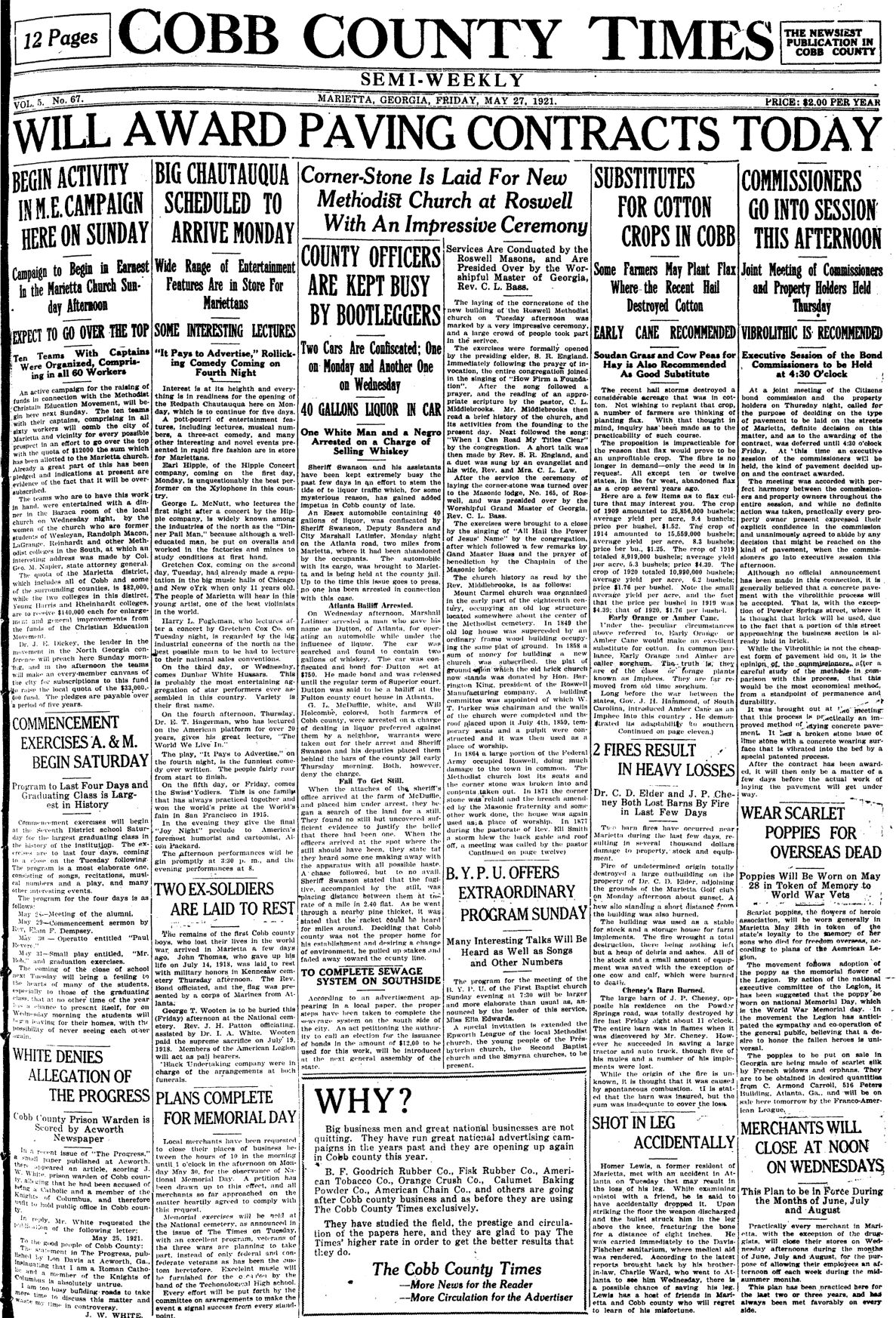 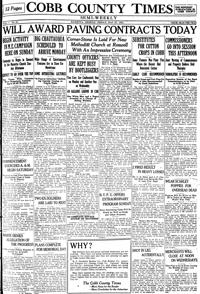 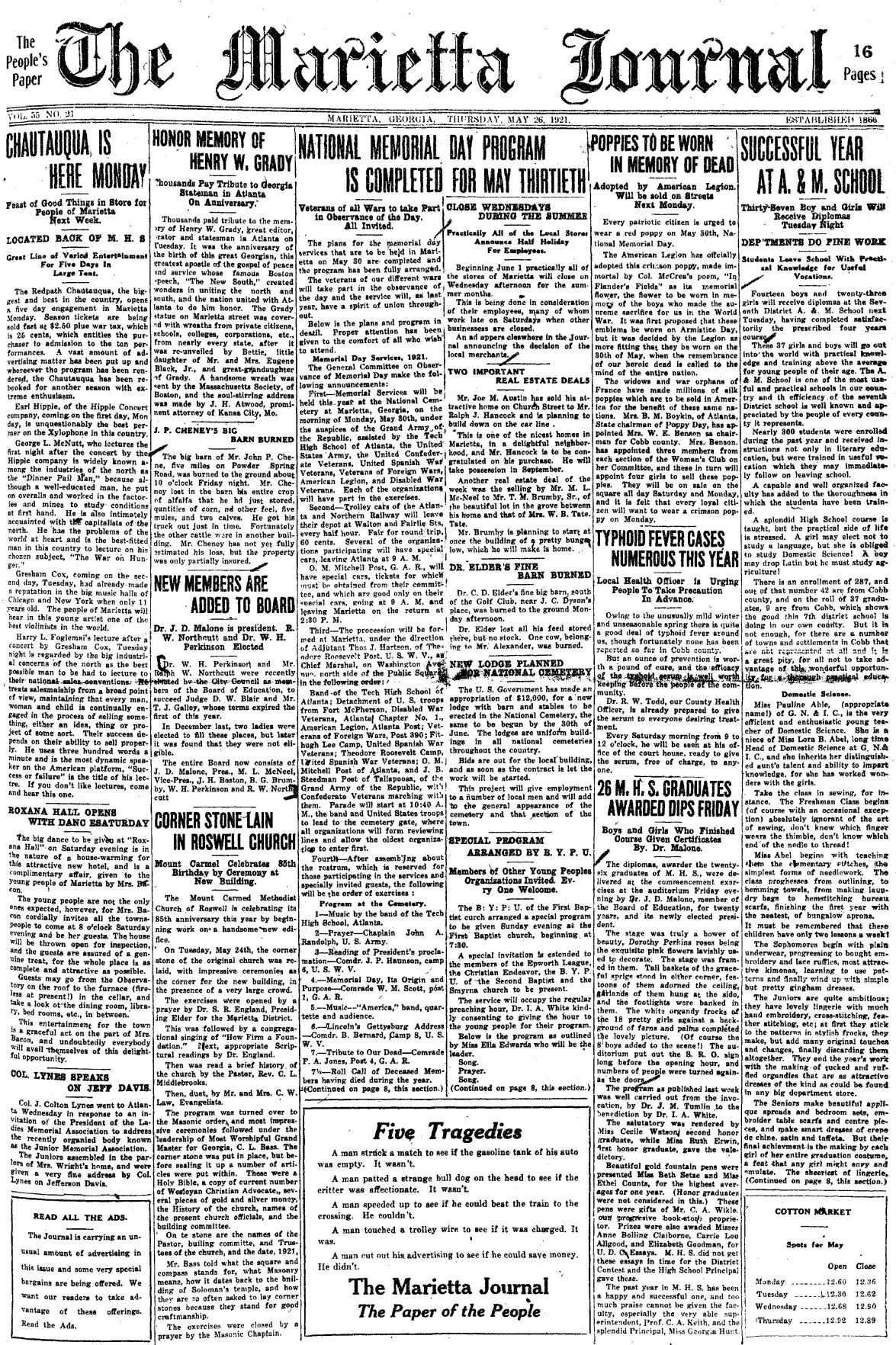 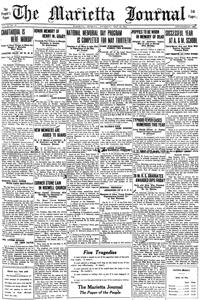 The Tuesday, May 24, 1921, edition of The Cobb County Times reported that Cherokee County Deputy Sheriff Charlie Loggins was shot and killed instantly while Cherokee County Sheriff T.W. Blackwell was “painfully wounded by an alleged bootlegger when he and a confederate offered resistance” after being arrested near Canton that morning.

The lawmen arrested the men in the liquor car a few miles out of Canton and on the trip back to the city, the car suffered engine trouble. Loggins got out to assess the trouble when one of the prisoners pulled a pistol from a pocket on the rear door of the car and shot Loggins in the heart. Blackwell overpowered the shooter, but the other bootlegger managed to escape.

In the “News From Our Correspondents” column, the Due West section reported that Mrs. Harvie Reed was “a very nervy woman” the week before when a tramp ordered her to hand him out some dinner and she replied with a shotgun that had him “hitting the dust up the road.”

The Wednesday afternoon before, Latimer arrested a man named Dutton operating an automobile while under the influence of liquor and possessing two gallons of whiskey. The car was confiscated and Dutton was discovered to be a bailiff at the Fulton County courthouse in Atlanta.

Black Undertaking Company handled the burial of two Cobb County men who lost their lives in service during WWI.

John Thomas, who died on July 14, 1918, was buried with military honors in the Kennesaw Cemetery the day before with a flag presented by a corps of Marines from Atlanta. George T. Wooten, who died July 19, 1918, was buried that day in the National Cemetery with members of the American Legion as pallbearers.

Dr. C.D. Elder’s large outbuilding, adjoining the grounds of the Marietta Golf Club, was destroyed by fire the Monday before around sunset. A new silo standing a short distance from the building was also burned. All the stock and a small amount of equipment were saved except one cow and calf, which burned to death.

J.P. Cheney’s large barn on Powder Springs Road was totally destroyed by fire the Friday before. When Cheney discovered the entire barn was on fire, he managed to save a tractor and a truck. However, five of his mules and a number of his implements were lost. The origin of the fire was believed to have been “spontaneous combustion.”

The “News About the City” column, written by editor Mrs. Harold Hawkins, reported that Harold Smith, son of Mr. and Mrs. H.G. Smith, was the winner of a $2.50 gold piece given to a child in the primary grades for not missing a word in spelling during the year.

The Thursday, May 26, 1921, edition of The Marietta Journal reported that the Mount Carmel Methodist Church of Roswell was celebrating its 85th anniversary. The Tuesday before, the corner stone of the original church was relaid as the corner for a new building.

In the Friday, May 24, 1946, edition of The Marietta Daily Journal it was reported that the inability to clear the title to an acre of land given in 1867 by the late Henry G. Cole forced the relocation of the future black hospital in Marietta and led to plans for building a park on the grounds. Cole specified in the deed that the land be used “for educational purposes” and hospital leaders were unwilling to build a $10,000 hospital on the grounds and risk loss of title. Because there was a need for a black park and playground in Marietta, the alternative plan was offered to utilize the land that had sat vacant for 79 years.

The Saturday, May 26, 1991, paper reported that a drunk driver speeding down the wrong side of Interstate 75 the night before left one man dead and at least four others injured after causing five accidents along a seven-mile stretch. Atlanta police said the Alabama man used an exit ramp to get onto Interstate 75 at the Northside Drive Interchange in Atlanta. From there, he continued north against oncoming traffic — causing two accidents in Atlanta before entering Cobb County.