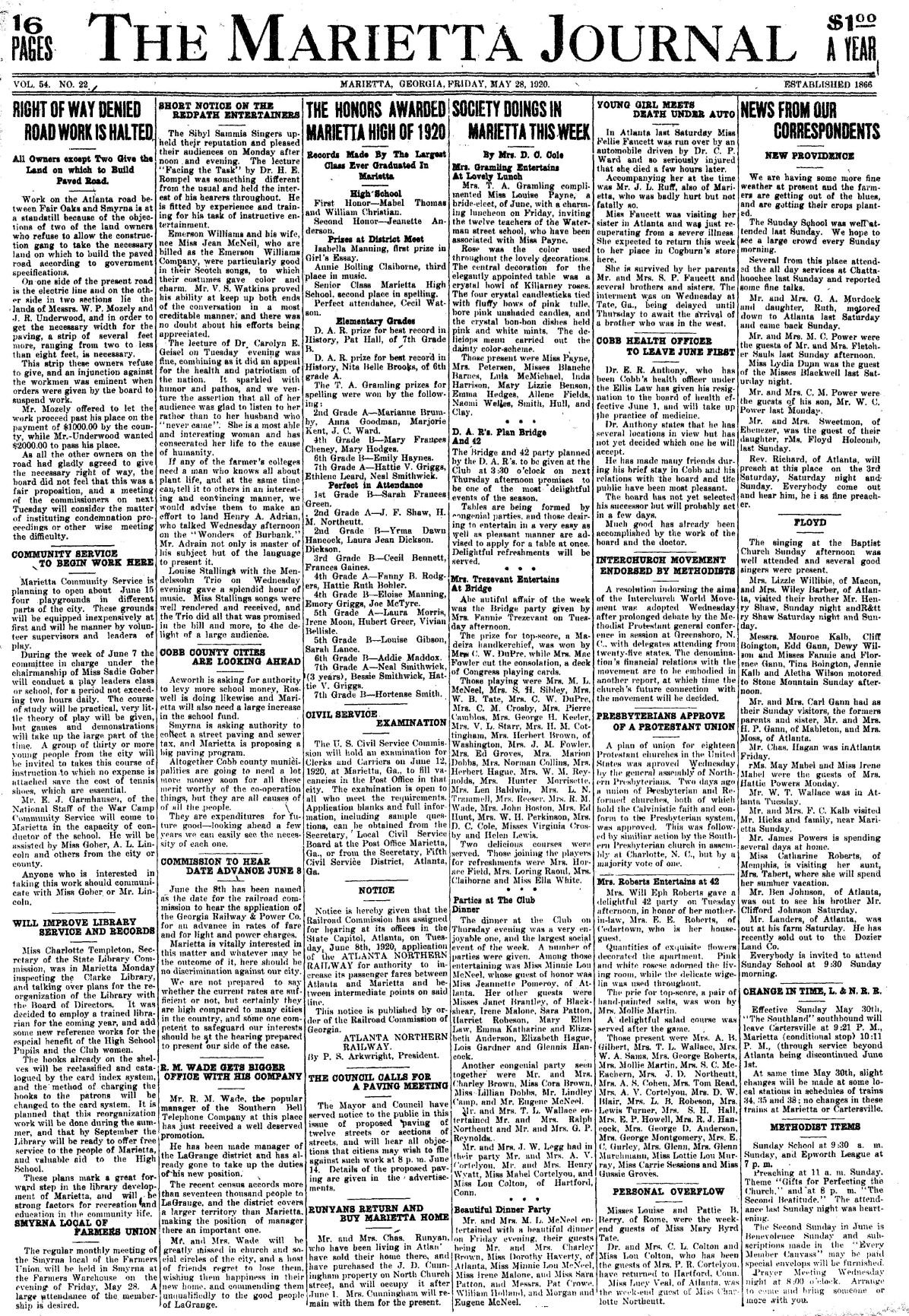 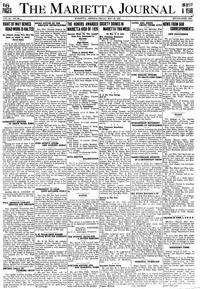 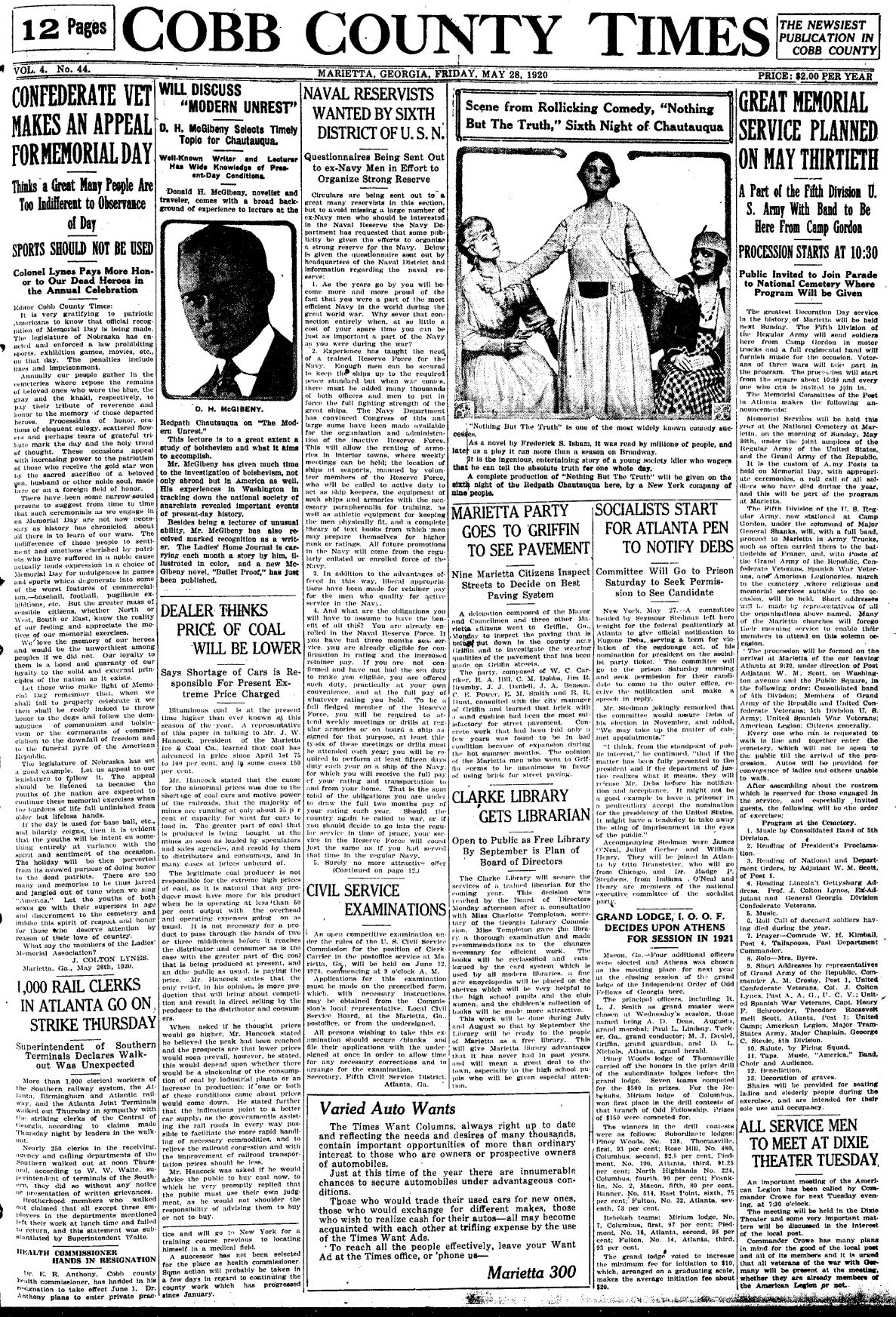 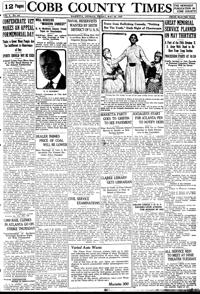 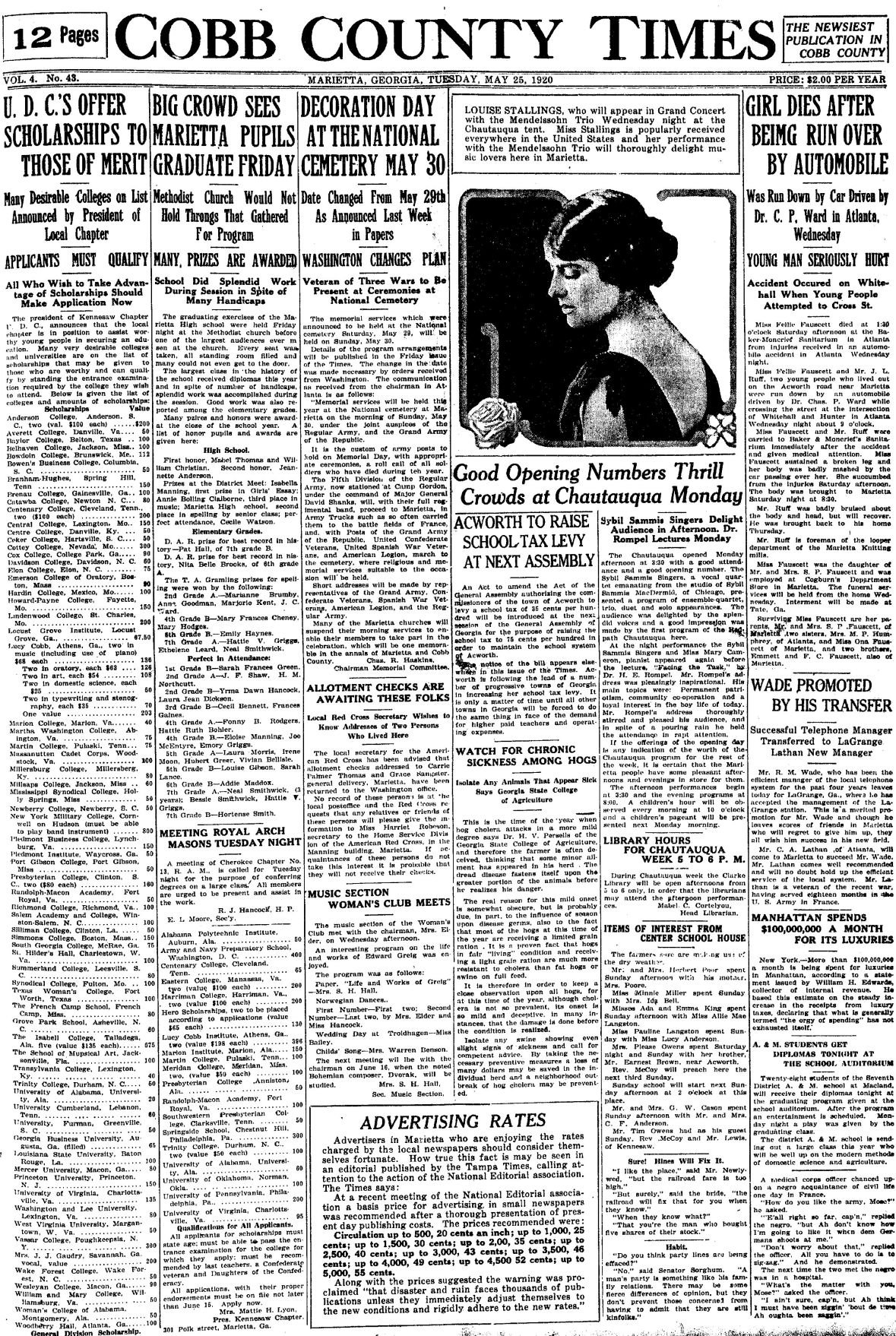 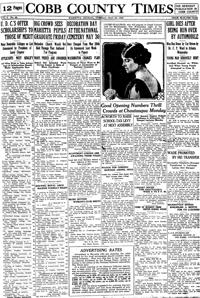 The Tuesday, May 25, 1920, edition of The Cobb County Times reported that Fellie Fauscett died at 1:30 p.m. the Saturday before at the Baker-Moncrief Sanitarium in Atlanta from injuries received in an automobile accident in Atlanta the Wednesday before.

Fauscett and J.L. Ruff, who lived on Acworth Road near Marietta, were reported as being run down by the automobile driven by Dr. Chas. P. Ward as they were crossing the street at the intersection of Whitehall and Hunter. Fauscett suffered a broken leg and a badly crushed body. Ruff, the foreman of the looper department at the Marietta Knitting Mills, was badly bruised about the head and body. He was expected to recover.

Acworth was expected to ask for a 35-cent school tax levy increase at the next session of the General Assembly. If approved, the levy would rise to 75 cents to maintain the Acworth school system. The city was following the lead of several other towns in Georgia.

R.M. Wade, the manager of Marietta's telephone system for the last four years, was reported as leaving to take over the LaGrange station. His successor was C.A. Lathan of Atlanta, a World War I veteran who served 18 months in France with the U.S. Army.

The Friday, May 28, 1920, edition of The Cobb County Times reported that over 1,000 clerical workers of the Southern Railway System, the Atlanta, Birmingham and Atlantic Railway and the Atlanta Joint Terminals walked out the day before "in sympathy" with the striking clerks of the Central of Georgia Railway.

On Page 3, Marietta Mayor Jim R. Brumby Jr. and the City Council took out a full page legal ad announcing the intent to pave and improve the unpaved portions or sections of a dozen downtown Marietta streets. Paving of the city's roads had been a major local issue for several years.

The Friday, May 28, 1920, edition of The Marietta Journal reported that Dr. E.R. Anthony, who had been Cobb's health officer under the Ellis Law, was giving his resignation in order to take up the practice of medicine.

The following items were in the Thursday, May 24, 1945, edition of The Marietta Daily Journal:

♦ Pfc. Warren C. Kurtz of Cobb County was reported as having been killed in action in Germany during WWII on April 18, 1945. Kurtz entered the service on Nov. 26, 1942, and had been overseas for one year with the Third Army.

♦ Harlie Smith, a discharged veteran, was reported as having drowned at Joyner's Pond in Fair Oaks that morning while swimming with two friends.

Also that day, S/Sgt. Ben Harbin of Marietta was reported as having been liberated from a German prison camp on an unreported date. Harbin was an engineer-gunner on a B-24 that went down over Austria on April 12, 1944.

Pfc. Eugene Dobbins of Marietta was reported in the Tuesday, May 29, 1945, paper as having been killed in action on Mindanao on April 28, 1945. He had been serving with the 34th Division in the Philippines.

♦ Capt. Douglas N. Winfrey, 25, of Austell was reported as having died on May 4, 1970, in a mid-air collision over Vietnam. An Army aviator, Winfrey had served in the Army three years and won several honors during a previous tour of duty in Germany.

♦ A parolee from the state prison work camp in Jackson was reported as being arrested in Marietta after leading officers from five different police departments on a high-speed chase in a stolen truck through three counties for 18 minutes.

AROUND TOWN: Sen. Loeffler says BLM's objectives do 'not bring us together'