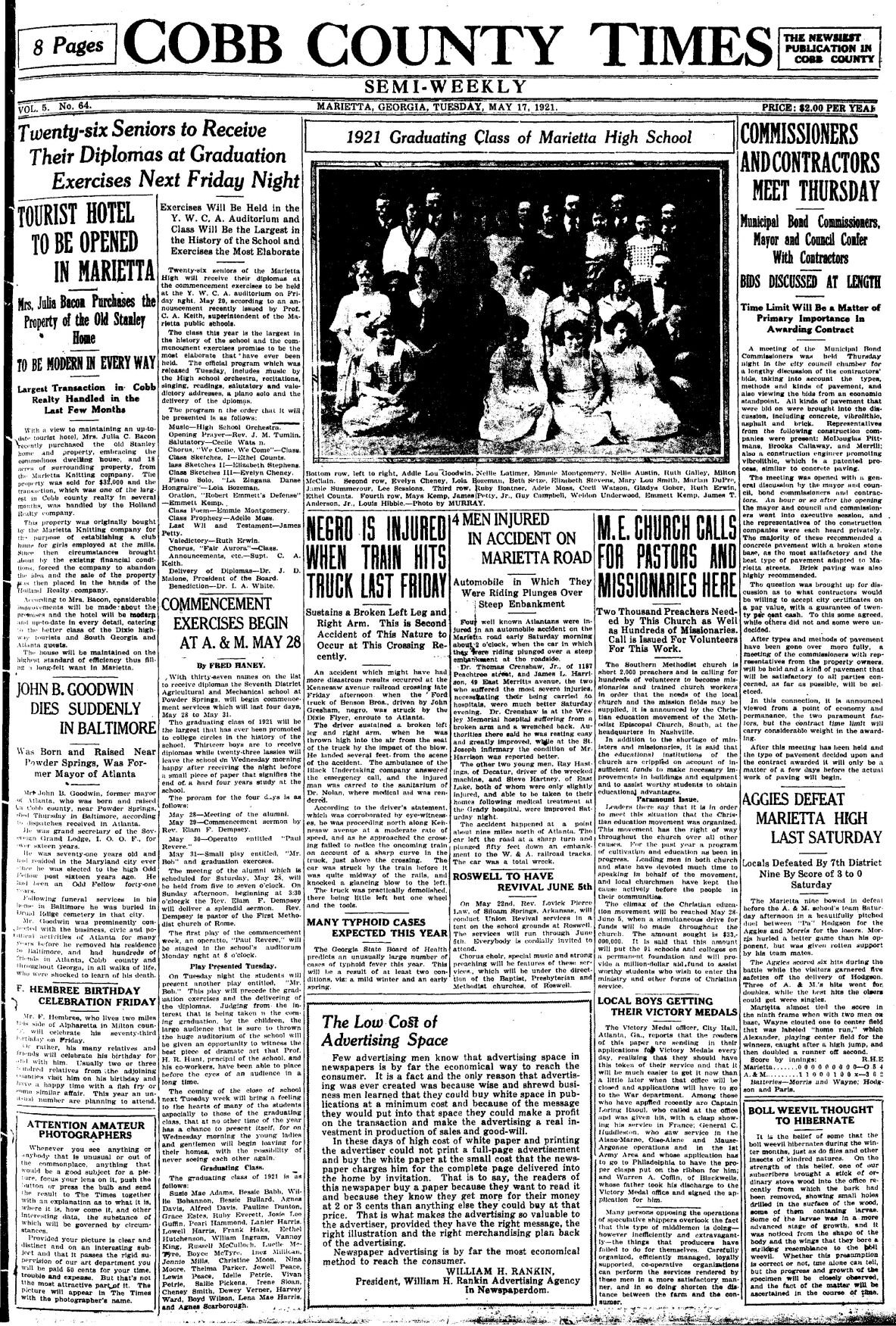 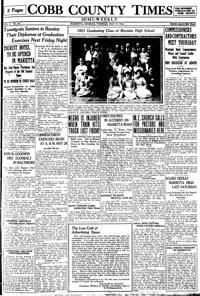 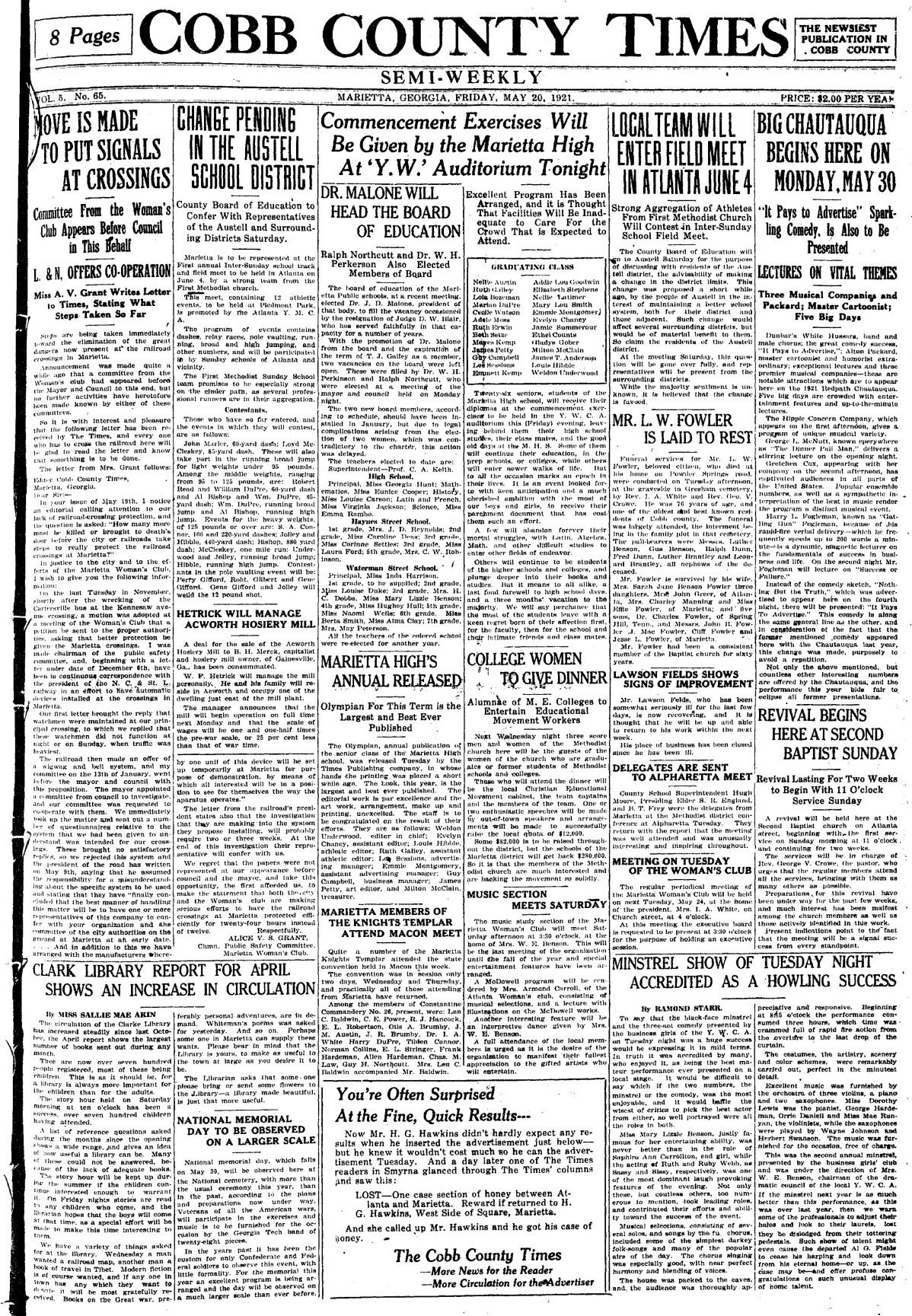 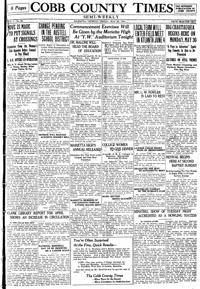 The Tuesday, May 17, 1921, edition of The Cobb County Times reported that Julia C. Bacon had purchased the old Stanley home and 18 acres of surrounding property from the Marietta Knitting Company to open “an up-to-date tourist hotel.” The $32,000 sale, handled by the Holland Realty Company, was the largest Cobb County real estate transaction in several months. The property had originally been bought by the Marietta Knitting Company in order to establish a club home for the girls employed at the mills.

A Benson Bros. Ford truck, driven by John Gresham, was struck by the Dixie Flyer en route to Atlanta at the Kennesaw Avenue railroad crossing the Friday before. Gresham, a black man, suffered a broken left leg and right arm when he was thrown from the vehicle by the impact and landed several feet from the scene. The Black Undertaking Company’s ambulance answered the emergency call and took Gresham to Dr. Nolan’s sanitarium. In a statement corroborated by eye-witnesses, Gresham was driving “at a moderate rate of speed” when he approached the crossing and failed to see the oncoming train due to a sharp curve in the track above the crossing. The truck, “practically demolished,” was reported as having “little left but one wheel and the tools.”

Four well-known Atlantans were also reported as being injured on “the Marietta Road” at about nine miles north of Atlanta the Saturday before when, at a sharp turn, the car plunged 50 feet down a steep embankment onto the Western & Atlantic Railroad tracks. Dr. Thomas Crenshaw Jr. was taken to Wesley Memorial Hospital suffering from a broken arm and a wrenched back. James L. Harrison was resting at the St. Joseph Infirmary. The other two men involved were Ray Hastings, the driver, and Steve Hartney. Both of these men were only slightly injured, while the car was listed as “a total wreck.”

Former Atlanta Mayor John B. Goodwin, 71, a Cobb County native that was born and raised near Powder Springs, was reported as having died the Thursday before in Baltimore. He was the grand secretary of the Sovereign Grand Lodge of the Independent Order of Odd Fellows for over 16 years. He had lived in Baltimore ever since he was elected to the high post and had been an Odd Fellow for 41 years.

The Thursday, May 19, 1921, edition of The Marietta Journal reported the following in the “News From Our Correspondents” column.

♦The Powder Springs section reported Ralph McTyre broke his kneecap when he fell after attempting to jump into a moving automobile.

♦The Kirks section reported farming had been at a stand still in the section since April 10, 1921 because of rain and hail. Most of the farmers were complaining of “poor stands of cotton” and several had planted a second time, getting even poorer stands.

In the Wednesday, May 15, 1946 edition of The Marietta Daily Journal it was reported that faulty wiring in a refrigerator at Dr. Ralph Fowler’s office in the Marietta Hospital caused a fire the day before that seriously damaged the machine and part of its contents. Firefighters were forced to don gas masks before entering the room because the wooden base inside the old unit had caught fire, filling the room with smoke.

Gov. Ellis Arnall was reported in the Monday, May 20, 1946, paper as asking State Attorney General Ben Cook for a ruling on “what can be done legally” with the Ku Klux Klan in Georgia. Arnall said the recent KKK display had “desecrated Stone Mountain and brought the name of Georgia into ridicule.” Arnall asked Cook to search the state laws to see if the Klan could be outlawed.

The Tuesday, May 21, 1946, paper reported that the entire City of Marietta suffered a complete blackout for 30 minutes because of a broken power pole at Cherokee and Page Street in east Marietta. The blackout was caused by a driver under the influence of alcohol. The car wreck broke a heavy-duty power pole into three pieces, tore away two concrete pillars dropping an overhanging porch onto another vehicle, snapped off an electric pole across the street, tore down 16 electric and telephone wires and yanked a globe off a street light over a block away. The driver miraculously only suffered a scratch on his right knee.