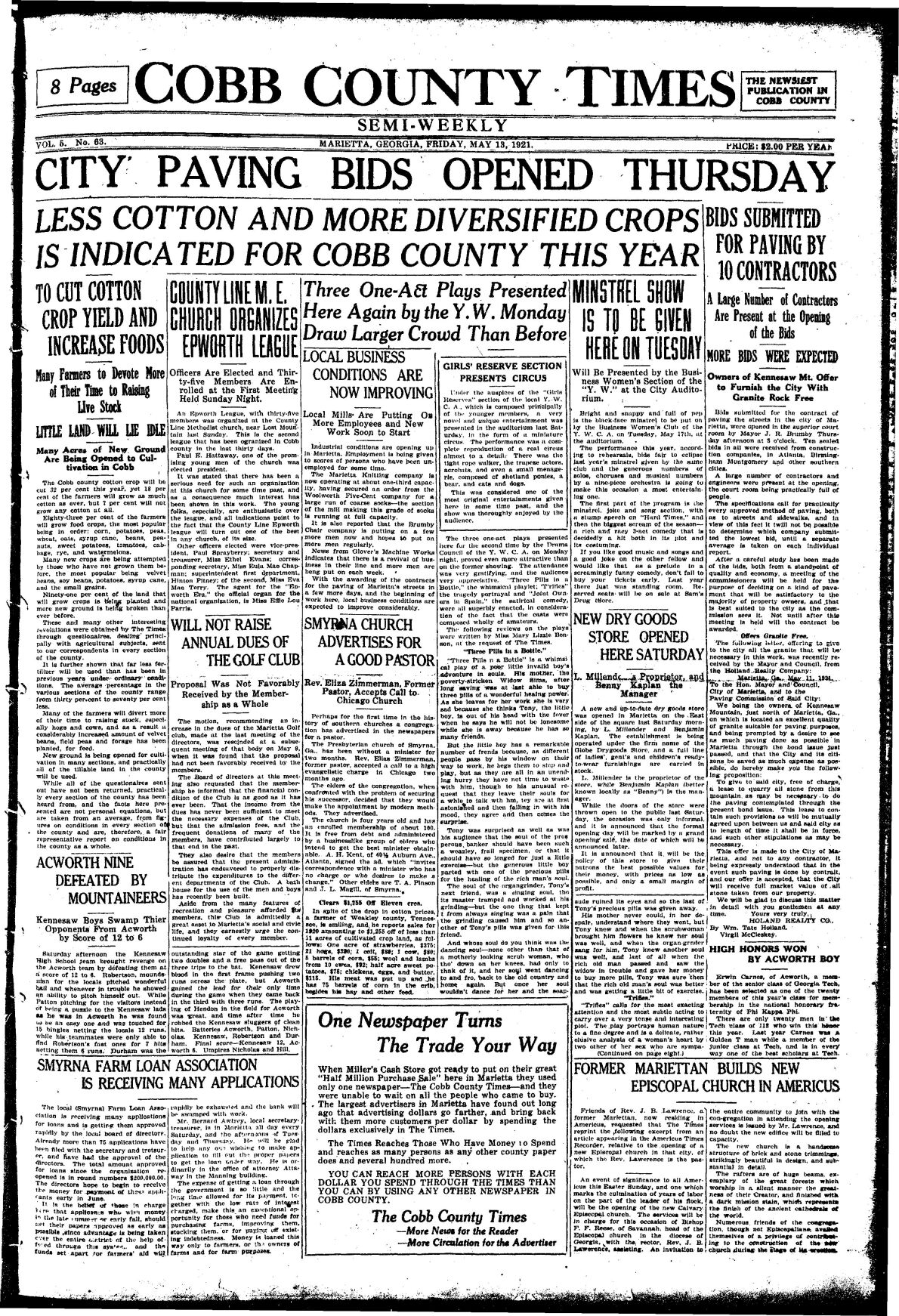 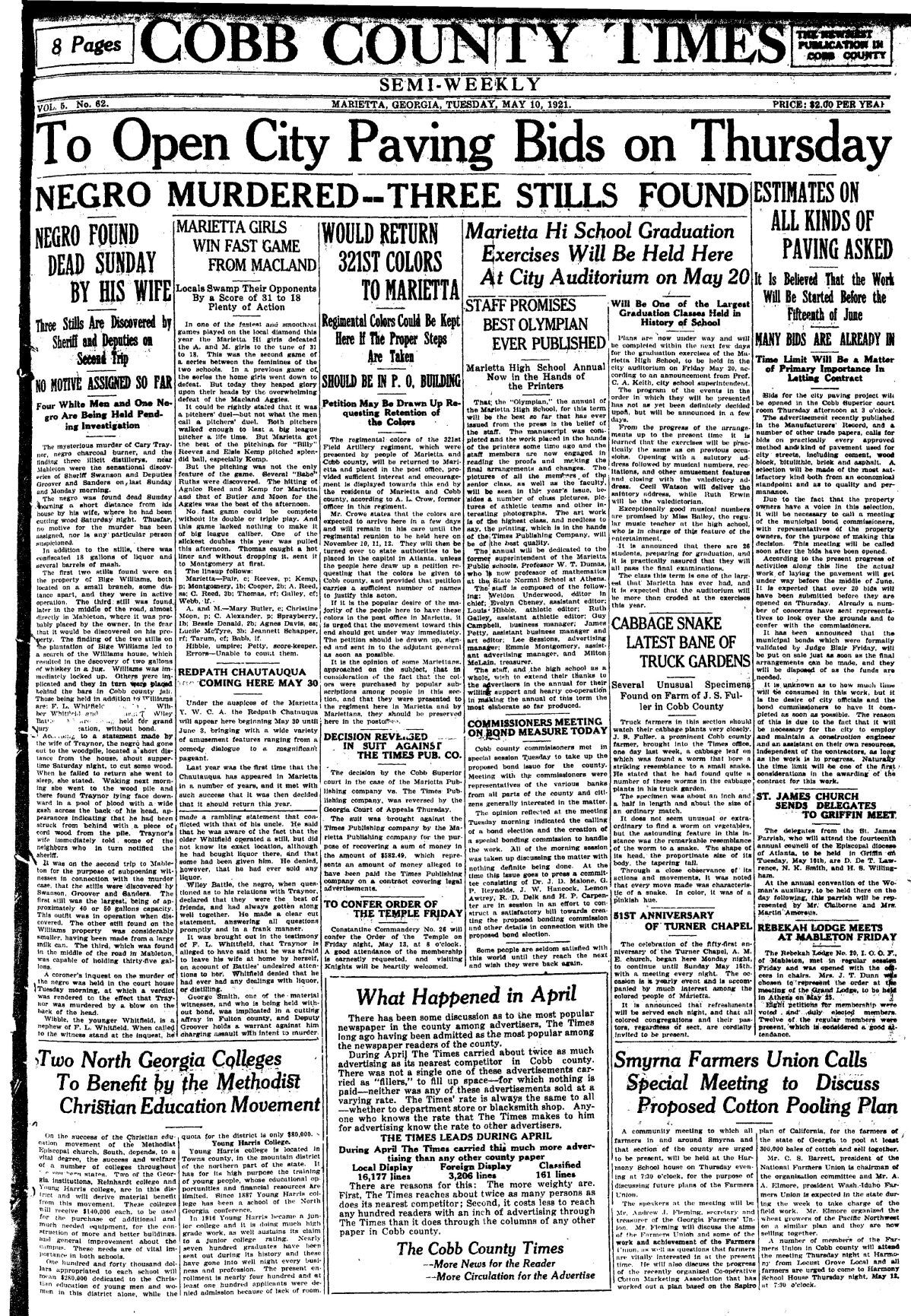 The Tuesday, May 10, 1921, edition of The Cobb County Times reported on “the mysterious murder of Cary Traynor,” a black man who was a charcoal burner, and the discovery of three illegal distilleries near Mableton by Sheriff Swanson and Deputies Groover and Sanders over the weekend.

Traynor was found dead on Sunday morning a short distance from his house by his wife, where he had been cutting wood the night before. At the time of the report, there wasn’t a motive for the murder or any suspects.

Traynor’s wife said he had gone to the woodpile around suppertime and after awhile she went to sleep. The next morning she went looking for her husband and found him face down in a pool of blood with a wide gash across the back of his head. It was believed that he had been struck from behind with a piece of cord wood from the pile.

While subpoenaing witnesses in connection with the murder case, the stills were discovered. In addition to the stills, 18 gallons of liquor and several barrels of mash were confiscated. The first two stills were found on the property of Bige Williams, located some distance apart and in active operation. These were between 40-50 gallon capacity. The third, which had a 35 gallon capacity, was found later in the middle of the road, almost directly in Mableton. It was assumed the owner had left it there for fear of it being discovered on his property.

The Friday, May 13, 1921, edition of The Cobb County Times reported that the public’s long standing cry for the paving of all roads in the City of Marietta was finally happening. Bids submitted for the contract of paving the city’s streets were opened in Superior Court by Mayor J.R. Brumby the afternoon before. Ten sealed bids in all were received from construction companies in Atlanta, Birmingham, Montgomery and other Southern cities.

In the Thursday, May 9, 1946, edition of The Marietta Daily Journal it was reported that more than 130 North Georgia and Central Georgia law enforcement officers attended the FBI conference in Marietta at the Larry Bell Center. Features of the program included skits, presented by FBI agents, portraying three different kinds of swindle games. The audience saw a check artist swindling a bank, two men short-changing a cashier in a drug store and confidence men in a race track swindle.

The Sunday, May 9, 1971, paper reported on the ongoing investigation into the brutal slayings of East Cobb pathologists Dr. Warren B. Matthews and his wife. Cobb Police were hoping that blood samples and handprints taken from Dr. Matthews’ sports car would help them apprehend the murderers.

Numerous finger prints were taken from the car, including one clear, complete right hand print — which was found on the right front fender above the headlight. The front seats of the car were covered with blood and blood was splattered on the car’s trunk. It was believed that Mrs. Matthews may have wounded one of the murderers in a shoot-out.

The Thursday, May 9, 1991, edition reported that the United Parcel Service announced it was moving its worldwide headquarters to the metro area from Greenwich, Connecticut because high housing costs in that state had become too burdensome for its employees. UPS, the world’s largest package delivery company, employed 1,000 people at its corporate headquarters.

The death of J. Leonard Reinsch, longtime Cox Broadcasting Corp. chairman, was reported in the Friday, May 10, 1991, paper. Reinsch, who advised Winston Churchill on his “Iron Curtain” speech and John F. Kennedy in the 1960 presidential debates with Richard Nixon, died the day before at the age of 82 from heart failure at Johns Hopkins Medical Center.