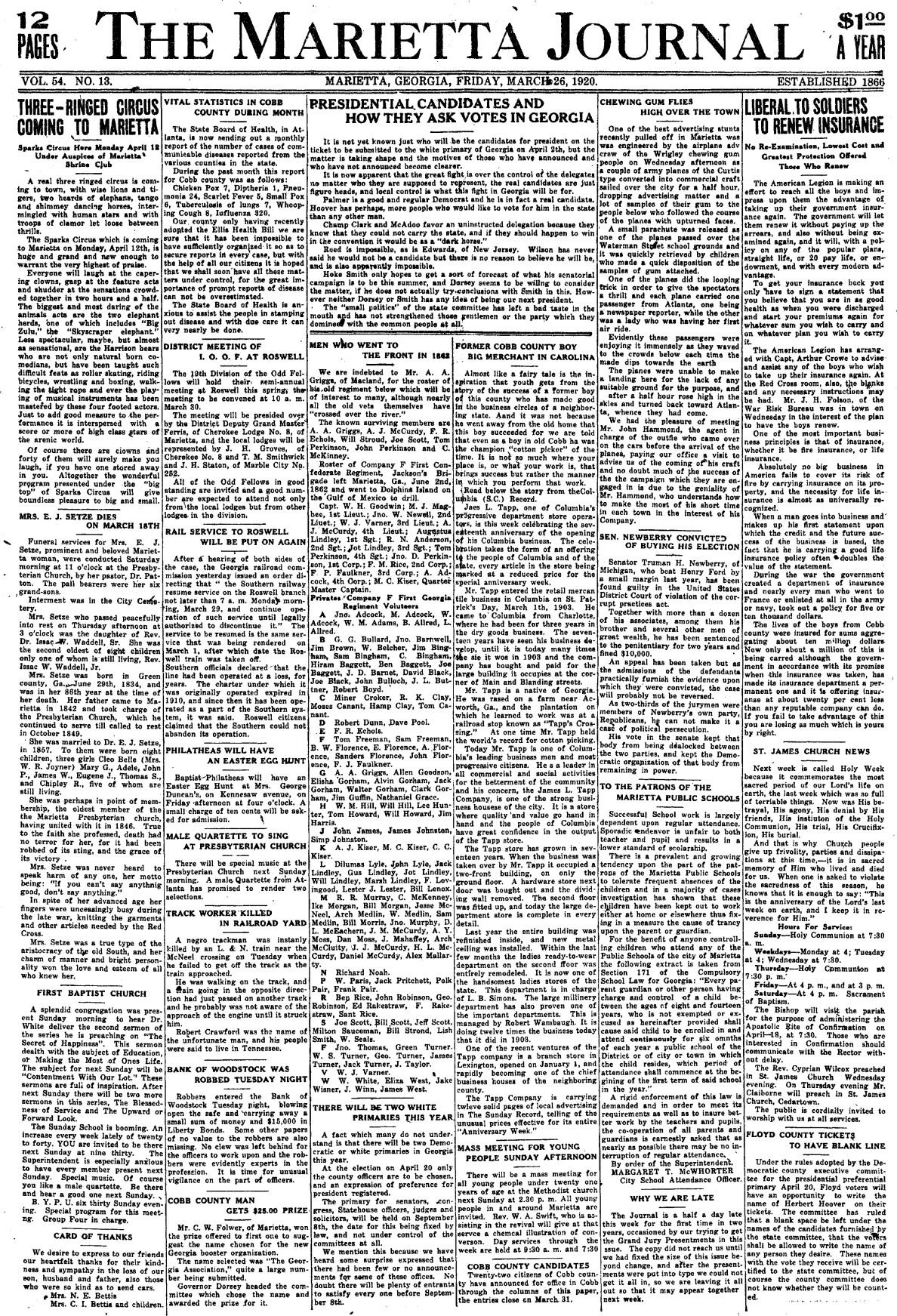 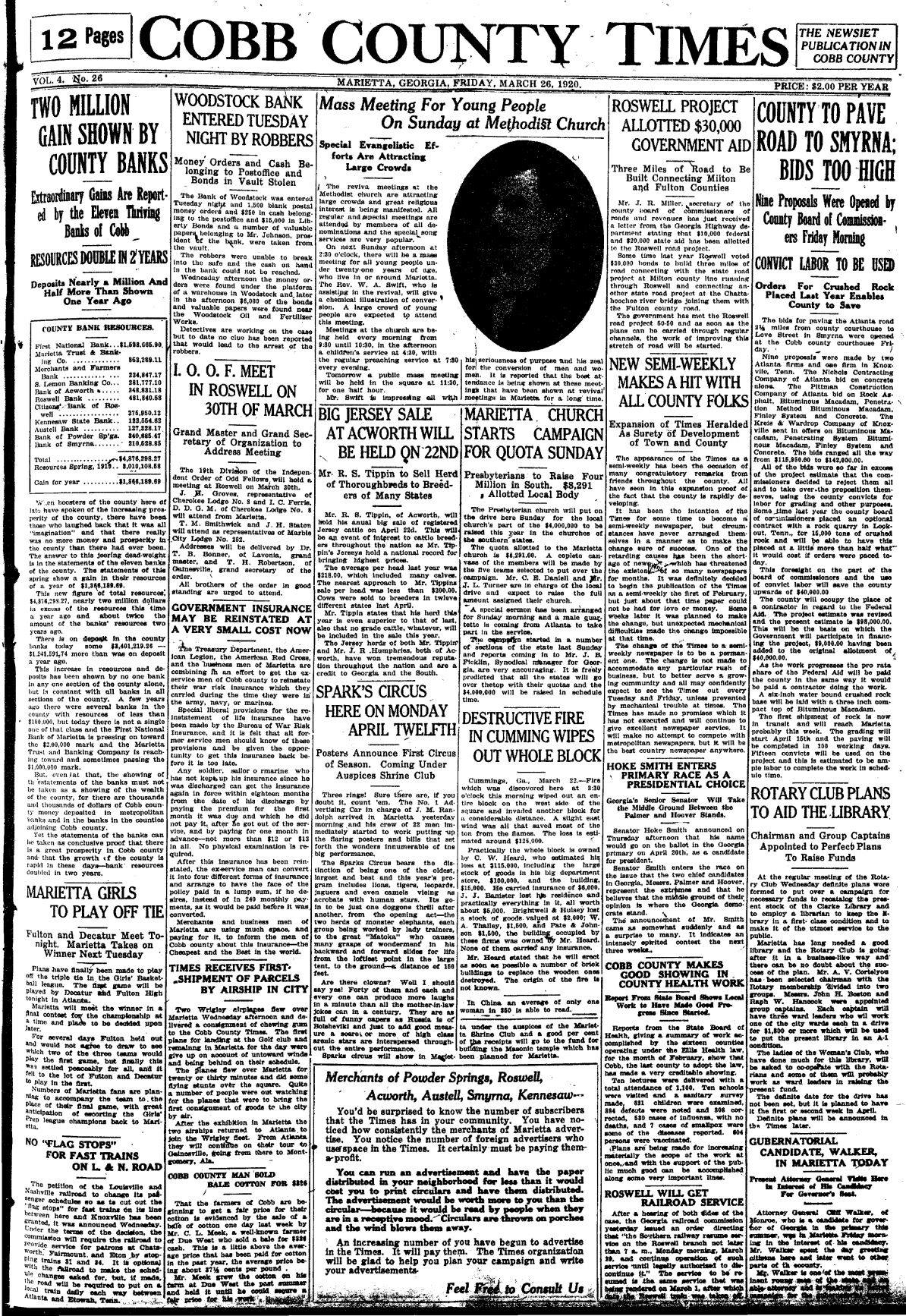 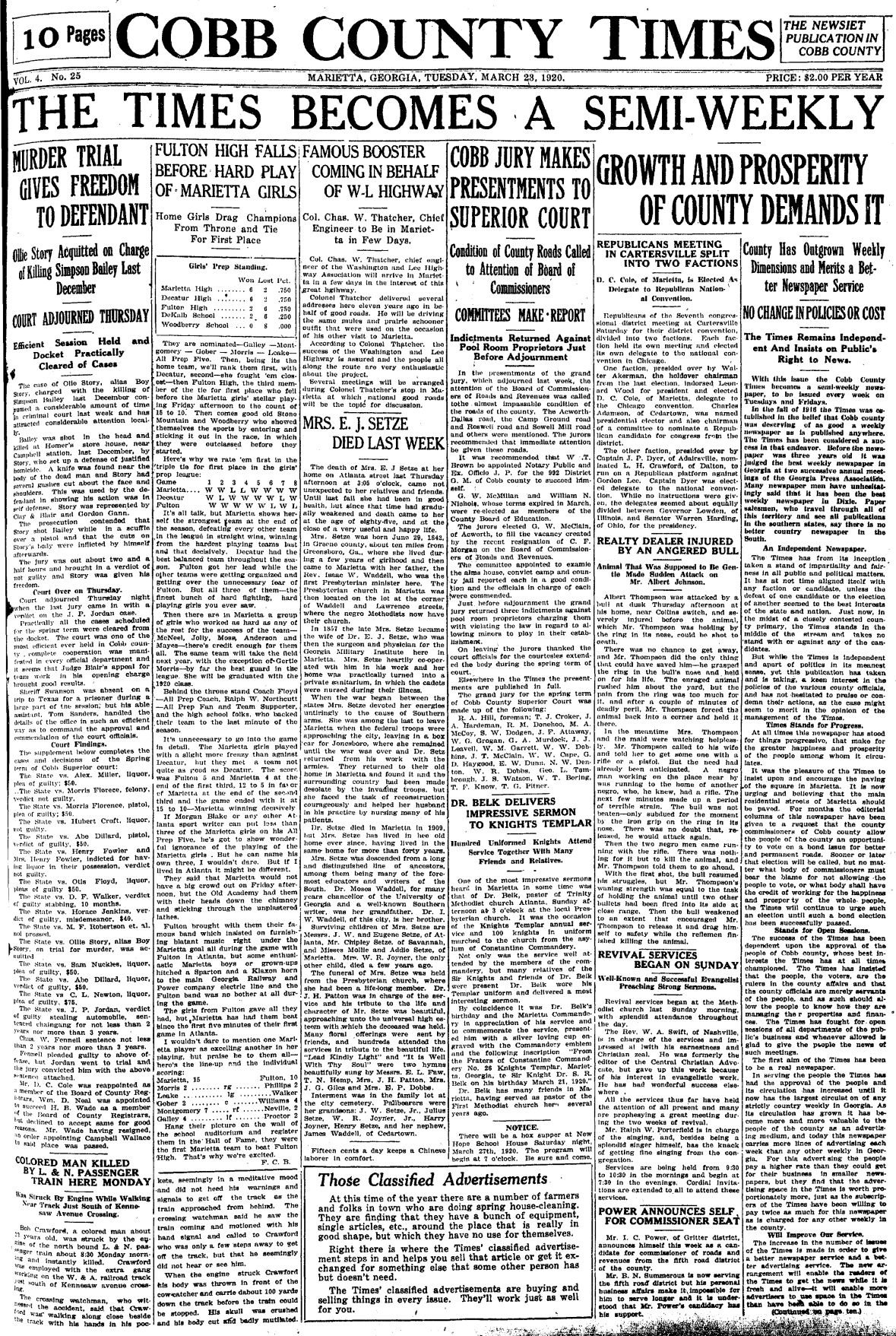 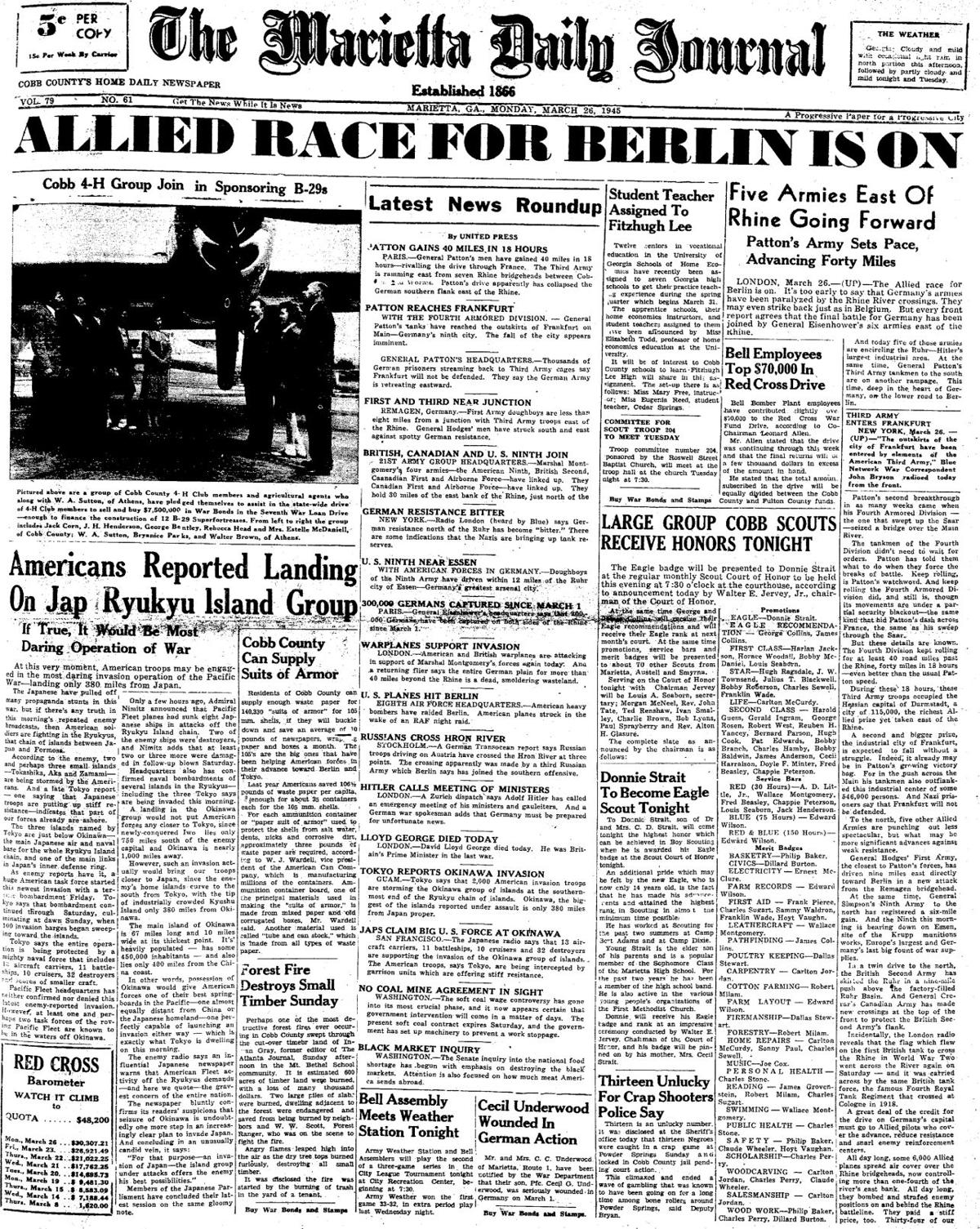 The front page of the Marietta Daily Journal from Monday, March 26, 1945.

The front page of the Marietta Daily Journal from Monday, March 26, 1945.

The Tuesday, March 23, 1920, edition of The Cobb County Times reported that with this issue, the newspaper was going to become a semi-weekly because “growth and prosperity of the county demands it.” The newspaper, which previously published on Thursdays, was going to start publishing editions on Tuesdays and Fridays.

The outcome of the previous week’s murder trial of Ollie Story was reported on the front page.

Story was accused of murdering Simpson Bailey in December 1919. Bailey was shot in the head at Homer’s store house near Campbell station by Story, who claimed it was justifiable homicide. A knife was found near Bailey’s body and Story had several gashes and cuts to his face and shoulders. The prosecution claimed that Story had killed Bailey and then inflicted the knife wounds himself afterwards. The jury, out for two and a half hours, acquitted Story of the charges.

Albert Thompson was reported as suddenly being attacked by a bull at dusk the Thursday before near his home at Collins Switch. Thompson was severely injured by the bull, which only became subdued when Thompson grasped the iron ring in its nose. Still fighting Thompson, the decision was made to shoot the animal to death with three shots from a rifle.

The Friday, March 26, 1920, edition of The Times reported that the Bank of Woodstock was broken into the Tuesday night before and 1,500 blank postal money orders, $250 in cash belonging to the post office, $15,000 in Liberty Bonds and a number of valuable papers were taken from the vault. The robbers were unable to break into the safe to reach the bank’s on-hand cash.

♦ Macland section — Frank Hopkins lost his barn and a mule to a fire caused by a lightning strike the Tuesday night before.

♦ Roswell section — Edward Ramsey, the young son of John Ramsey, was painfully burned the Monday before when a playmate threw a lit match into some gasoline in the tank of an old car that the two were playing in.

The Friday, March 26, 1920, edition of The Marietta Journal reported that Robert Crawford, a black trackman, was instantly killed by a Louisville & Nashville train near the McNeel Crossing the Tuesday before. Another train had passed Crawford on the track opposite the one he was walking on and he was believed to be unaware of the approaching train until it struck him.

The Tuesday, March 20, 1945, Marietta Daily Journal reported that two service men had been killed in action during fighting in WWII.

Pfc. Elbert Shirley of Marietta was killed Feb. 24 in Germany while serving with the U.S. Medical Corps.

Seaman First Class James Edward Brown, 27, of Smyrna, previously reported missing in action, was killed in action in the Pacific Theater on Jan. 9.

Bill Baswell and Cecil Harris, “inseparable buddies” from first grade to graduation at the Robert L. Osborne School were reported in the Wednesday, March 21, 1945, paper as meeting during the Iwo Jima campaign of WWII and helped carry the U.S. flag to within 650 miles of Tokyo.

Sgt. Fred H. Trezevant, a prisoner of war in Germany for six months, was reported in the Thursday, March 22, 1945, paper as having been liberated from Germany’s Lager-Bezichnung M-Stammlager camp by the Russians. Trezevant was captured while serving in the Infantry in France on Oct. 24, 1944.

In the Sunday, March 22, 1970, paper it was reported that a Mableton woman and her 13-year-old daughter returned to their car after shopping for an hour at a Smyrna shopping center to find an abandoned newborn baby in a blanket on the back seat with a note asking the finder to care for him.

A C-45 plane was reported as having crashed at Dobbins Air Force Base the day before in the Monday, March 23, 1970, paper. Lt. Robert Claude Ewing of Auburn University, Alabama, who was a passenger in the plane, was in intensive care at Kennestone Hospital. The pilot, Marine Lt. Col. Thomas Edward Bradley, was listed in satisfactory condition. A third officer, Marine Maj. Robert F. Warren, was killed in the crash.

The Latest: Guard from several states in D.C. to help

School board to meet tonight in person for work session