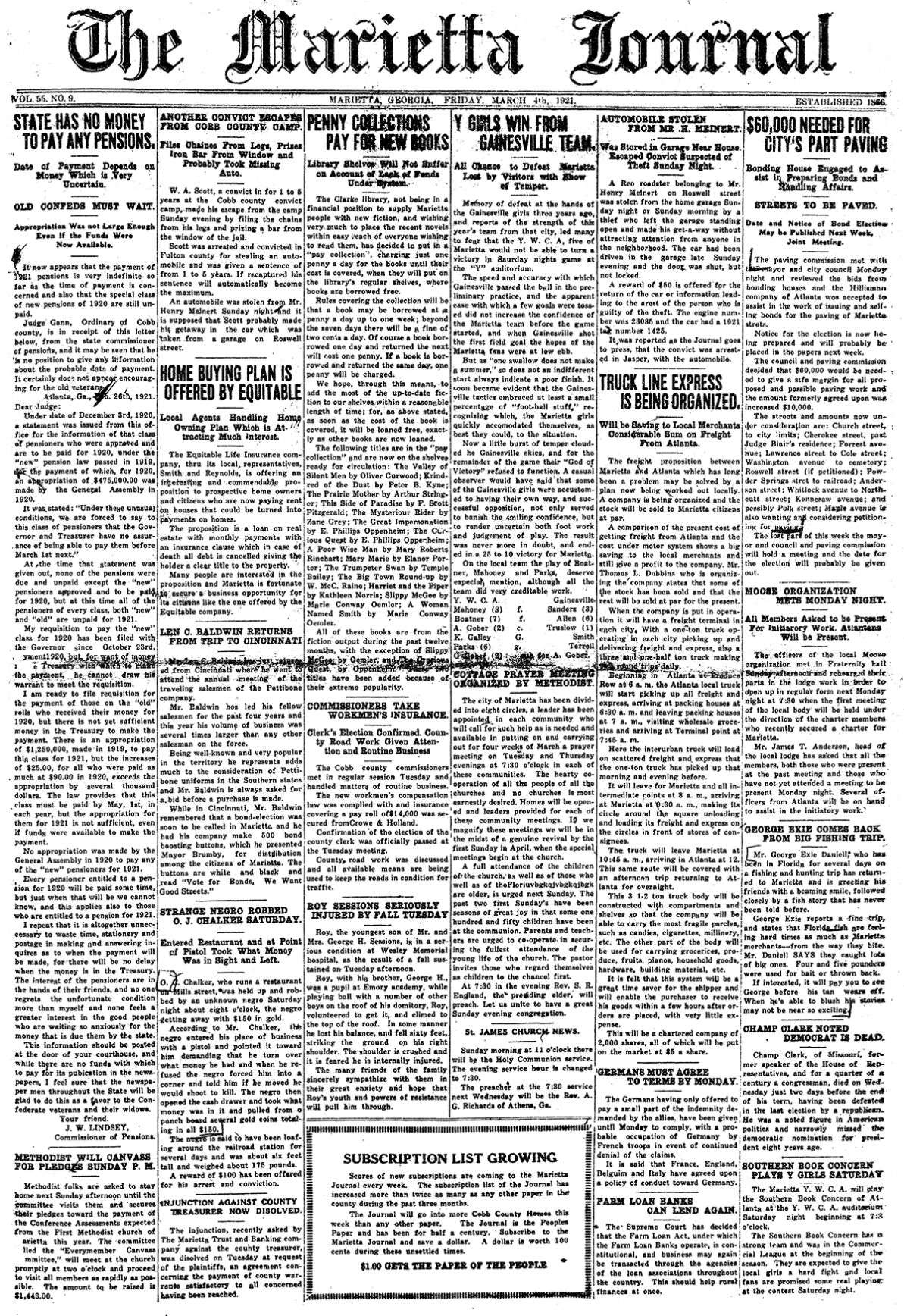 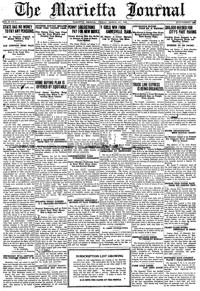 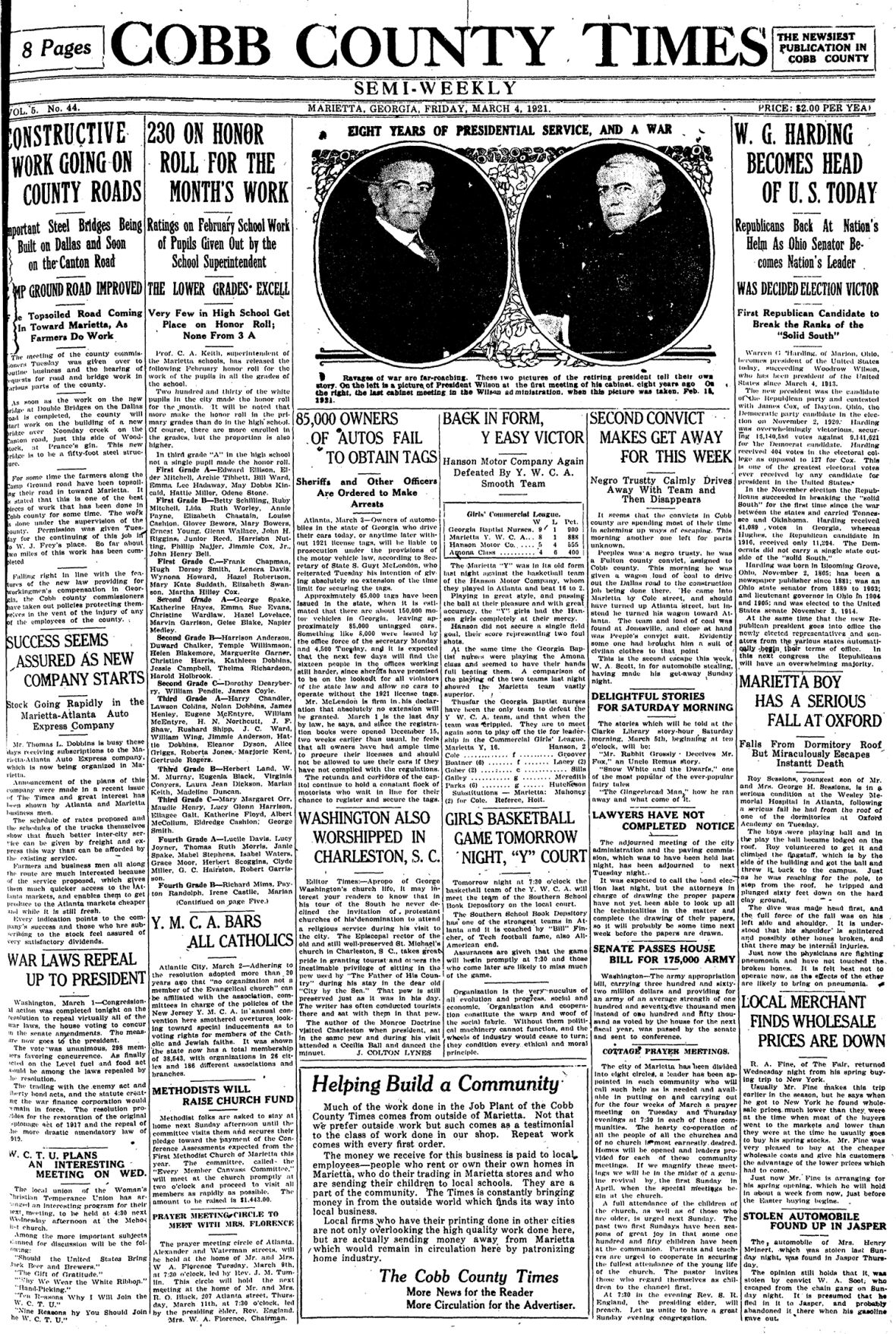 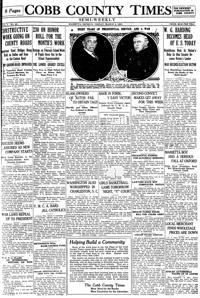 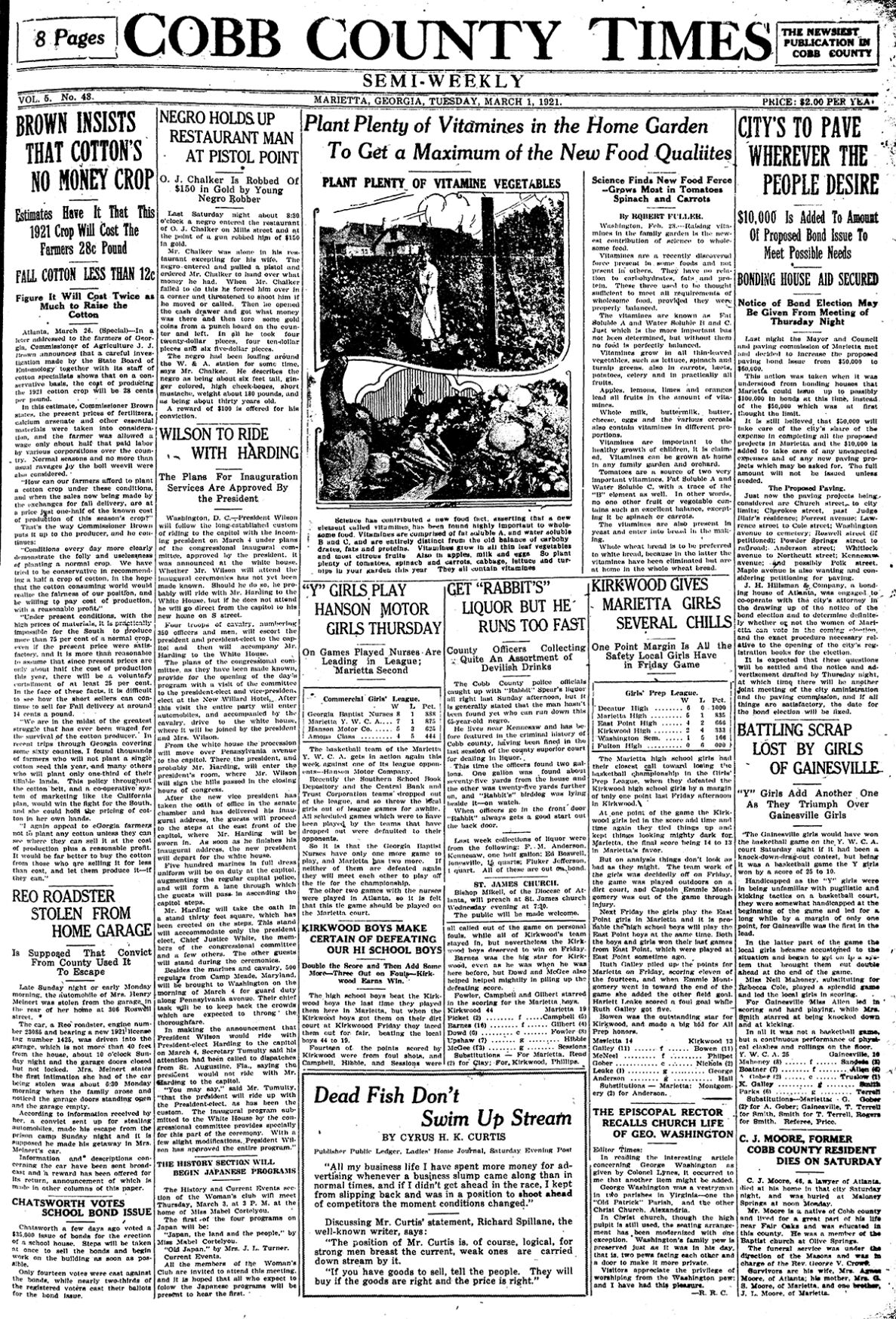 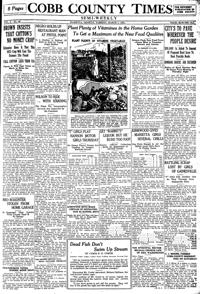 The front page of the Cobb County Times from Tuesday, March 1, 1921.

The front page of the Cobb County Times from Tuesday, March 1, 1921.

The Tuesday, March 1, 1921, edition of The Cobb County Times reported that at 8:30 p.m. the Saturday before a young man entered O.J. Chalker’s restaurant on Mills Street and robbed him of $150 at gunpoint. Chalker was alone except for his wife. When Chalker initially refused to comply, the robber forced him into a corner and threatened to shoot him. The robber, who had been seen prior to the robbery loafing around the Western & Atlantic Railroad station for some time, then opened and emptied the cash drawer.

The Friday, March 4, 1921, edition of The Cobb County Times reported a second convict escaped from Cobb County that week. A black trusty, who was a Fulton County convict assigned to Cobb, was given a wagon load of coal to drive out to the Dallas Road construction site. The man rode into Marietta by Cole Street and should have turned up Atlanta Street; instead, he turned the wagon toward Atlanta. The man’s convict suit, the team and load of coal were found at Jonesville. W.A. Scott — who was in for automobile theft — escaped the Sunday night before.

Roy Sessions, the youngest son of George H. Sessions, was reported as being in serious condition at the Wesley Memorial Hospital in Atlanta after falling from the roof of one of the dormitories at Oxford Academy the Tuesday before. The boys were playing baseball when the ball became lodged on the roof. Roy went up to get it by climbing the flagpole next to the building. After throwing it back, he reached out for the pole, tripped and plunged 60 feet headfirst down onto the hard clay ground. The full force of the fall was on his left side and shoulder. The shoulder was splintered, some other bones were broken and he was believed to have internal injuries.

In the “News From Our Correspondents” column, the McAfee section reported “Pum” Lowe, a black man, lost his house and two of his children to a fire. “Pum” and his wife had gone out and left their three children at home, which caught fire and only the eldest boy was able to escape.

The Friday, March 4, 1921, edition of The Marietta Journal reported in the Kennesaw section of the “News From Our Correspondents” column that new Cobb County Police officer P.M. Groover learned how to put the Sunday whiskey peddlers out of business. The Sunday before, Groover and Sanders went up the highway and down into the woods behind the home of Andy Spears. They captured 8 gallons of booze, but Spears — a black man and an old offender — managed to escape.

In the Friday, March 1, 1946, edition of The Marietta Daily Journal the following items were reported:

♦The Marietta School Board was reported as allotting $4,800 from the Federal Works Agency for preliminary planning of a black grammar school to replace the Lemon Street School, which was described as a “dark, dingy, ill-equipped, worn-out, frame fire-trap” in a report by the school board in November 1945. The new building was to be erected on the north side of Lemon Street next to Perkinson High School and the cost of the building was estimated by architects at $130,000.

♦Sherill Norman, 28, a civilian employee at Fort McPherson, was reported as having drowned the day before when a boat overturned on Groover’s Lake near Austell. Chief Howard Schaffer, Bud Schaffer and Fred Addison of the Marietta Fire Department rushed to the scene with resuscitating and dragging equipment after receiving the call at 6 p.m. The men left the dragging equipment at the lake at 9:30 p.m. after being unable to recover the body.

♦Burglars entered the Nu-Way Cleaners pick-up station on Cherokee Street in Marietta the day before and stole approximately $28 in change from the cash drawer. Entrance was gained by breaking out the back room window and releasing the latch inside.

A mock duel in the spirit of fun was reported in the Sunday, March 3, 1946, paper as ending in tragedy and the death of Walter Clayton Barfield, 21, the grandson of David D. Barfield of Marietta. The tragedy occurred on Feb. 22, 1946, when young Barfield and a friend, Mason McMinch Jr., were enacting a duel in San Pasqual Valley, California. They paced the traditional distance and drew pistols when McMinch’s gun went off. Barfield was shot through his left forearm and heart. Witnesses confirmed that the shooting was accidental.

The two-story Austell residence of Dr. J.C. Pirkle, an Austell physician, was reported in the Monday, March 4, 1946, paper as being severely damaged by a fire. Mrs. Stella Bagby, a nurse at the Austell Hospital who resided at the Pirkle home, suffered a broken ankle after jumping from a second story bedroom window. As the paper went to press, the fire was still raging with part of the tile roof of the huge home collapsing after the Marietta Fire Department arrived to assist the Austell department in combating the blaze.