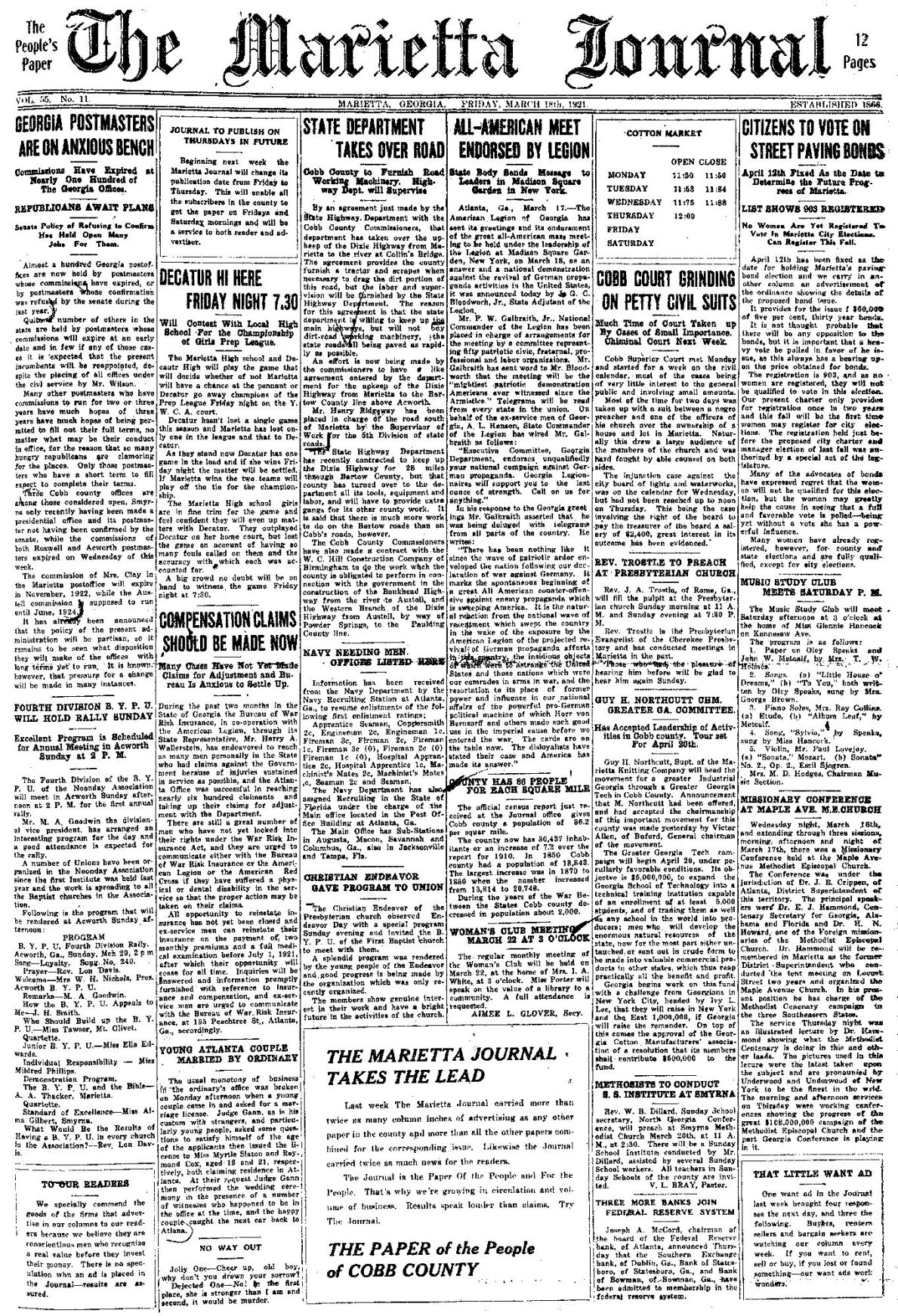 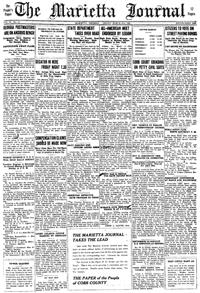 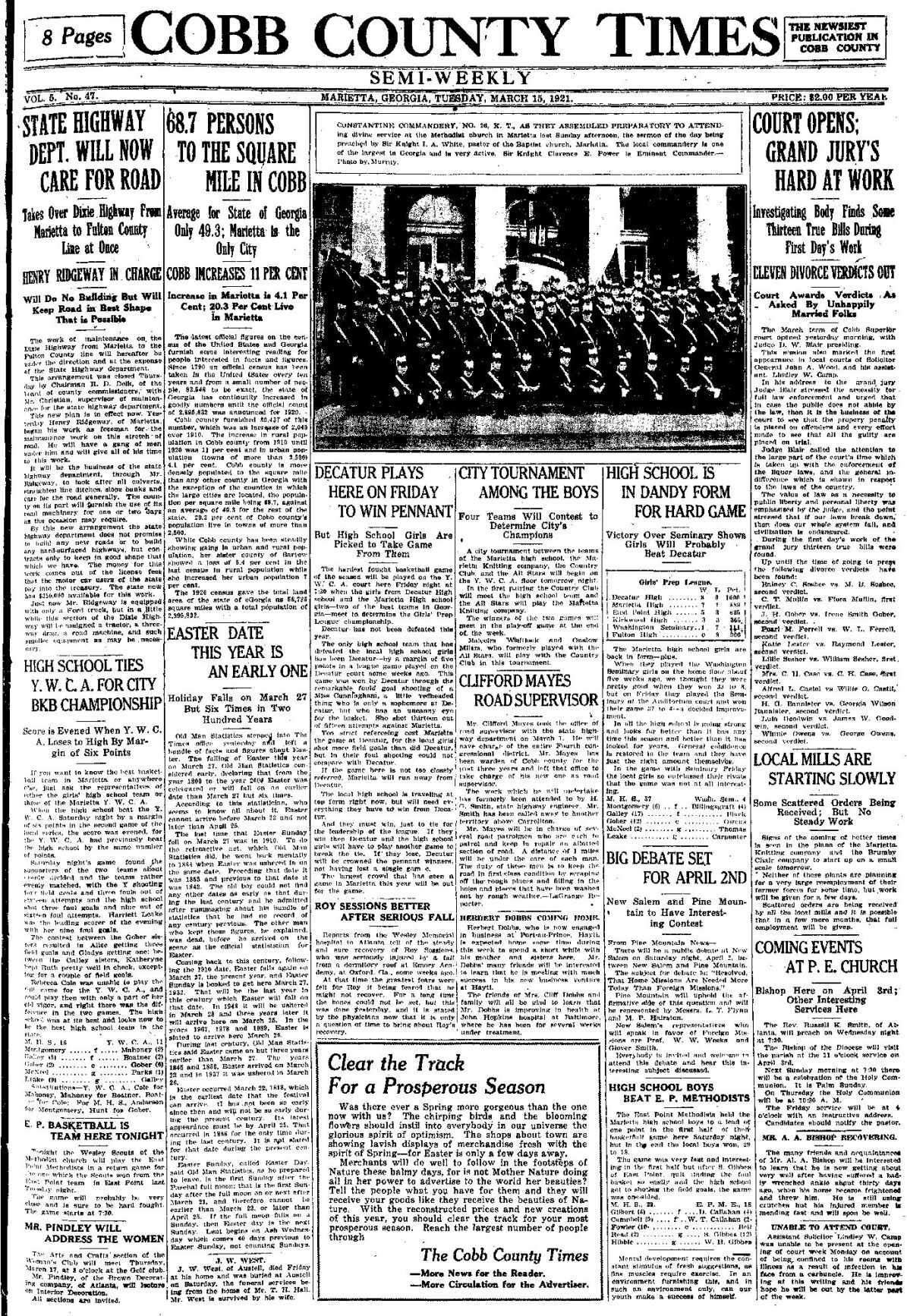 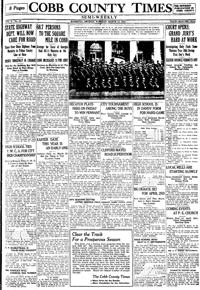 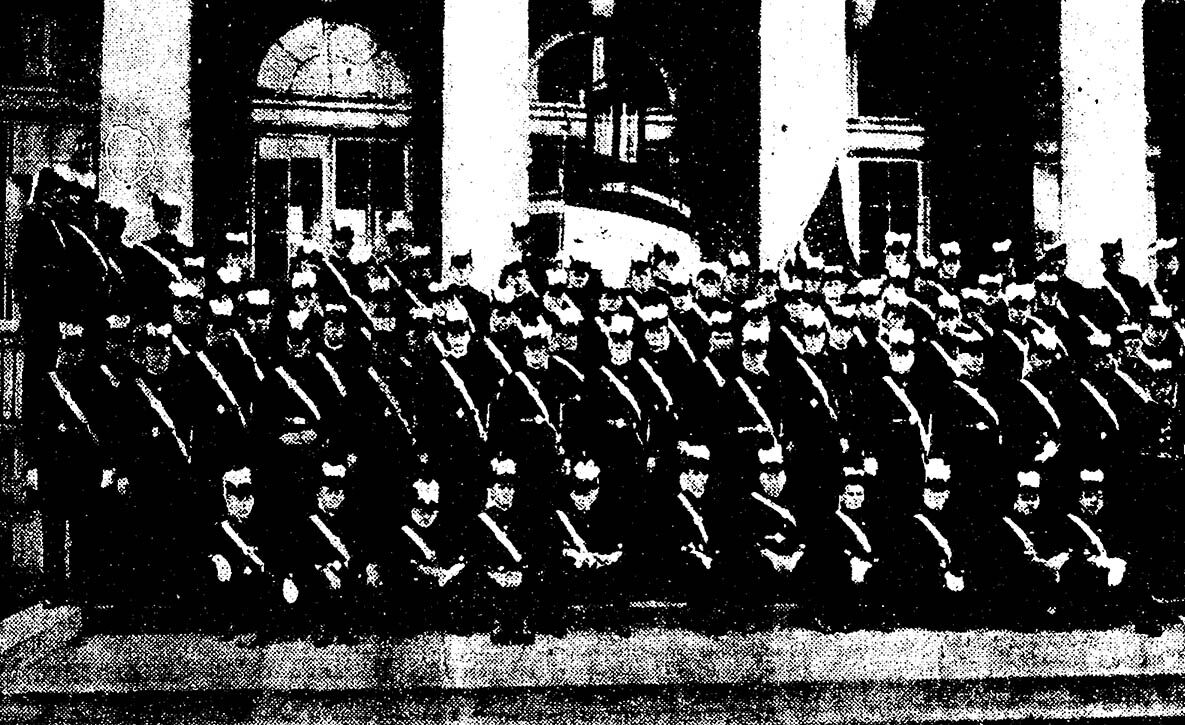 From the March 15, 1920, edition of the Cobb County Times. Pictured is the Constantine Commandery, No. 26, K.T., as they assembled in preparation to attend divine service at the Marietta Methodist Church the Sunday afternoon before. The sermon of the day was being preached by Sir Knight I.A. White, pastor of the Marietta Baptist Church. The local commandery is one of the largest in Georgia and is very active. Sir Knight Clarence E. Power was the Eminent Commander.

From the March 15, 1920, edition of the Cobb County Times. Pictured is the Constantine Commandery, No. 26, K.T., as they assembled in preparation to attend divine service at the Marietta Methodist Church the Sunday afternoon before. The sermon of the day was being preached by Sir Knight I.A. White, pastor of the Marietta Baptist Church. The local commandery is one of the largest in Georgia and is very active. Sir Knight Clarence E. Power was the Eminent Commander.

The Tuesday, March 15, 1921, edition of The Cobb County Times reported some interesting facts and figures from the latest official numbers on the U.S. and Georgia census. Since 1790, an official census has been taken in the U.S. every 10 years. From a small number of people — 82,548 to be exact — the state of Georgia had continually increased in number until the official 1920 count of 2,895,832. Cobb County furnished 30,437 of this number, which was an increase of 2,040 over 1910. The increase in the rural population was 11% and 4.1% in the urban population. While Cobb had gains, neighboring Bartow County had a loss of 5.4% in rural population and 7% in urban population.

The Friday, March 18, 1921, edition of The Cobb County Times reported on the death and burial of Rev. W.E. McCollum of Mt. Olivet. McCollum was one of the most beloved preachers in the county and had served at four Baptist churches prior to his death. It was estimated that he had 2,000 people attend his Kennesaw funeral.

Atlanta was reported as being in a stir over the killing of Fred G. Thompson, a Smyrna farmer that had moved into the city. Thompson was “cut to death” by J.C. Thomas near Lakewood the Friday before. The investigation, which was still underway, reported that Thompson and three others stopped at Thomas’ place of business and took him off in a large car. Thomas claimed that near Lakewood they turned on him and he began “cutting to the right and left,” and Thompson died from his wounds.

The Friday, March 18, 1921, edition of The Marietta Journal reported in the Highlands section of the “News From Our Correspondents” column that Cecile Stephens, the little two-year-old son of W.D. Stephens, fell on a cane the Friday before and cut his throat badly. The boy was being treated by Dr. Hagood.

The following items were reported in the Monday, March 11, 1946, edition of The Marietta Daily Journal:

♦H.G. Flynn, 38, of Sewell’s Place on Gordon Road in Cobb County, was being held in Atlanta on assault with intent to murder charges after he and with P.H. White of Atlanta allegedly cut the throat of a worker attempting to pass through their picket line at the Whittier Mills. The victim was R.M. Wallace of Atlanta and Grady Hospital put 20 stitches in his throat. Flynn and White were said by police to have cut Wallace’s throat and hit him over the head with a blackjack.

♦Safe crackers opened the safe at Marietta High School and stole $100 in cash. Entrance to the building was made through a downstairs window. The burglars then broke the locks on three doors before finding the safe in Principal E.D. Covington’s office. The room was also reported as having been searched for valuables with desk drawers rifled and papers scattered about the office.

♦Railroad transportation between Atlanta and Chattanooga was delayed more than three hours the day before when a northbound pick-up freight engine derailed in Acworth. The engine was switching boxcars in the Acworth yards when the derailment occurred.

The Sunday, March 14, 1971, edition of the paper reported “it only took him 15 minutes to earn a Silver Star — but it was the longest 15 minutes of his life.” Cobb County war hero Chief Warrant Officer Gregory S. Bowers, 21, also received a Purple Heart as a result of those 15 crucial minutes on Valentine’s Day 1970.

Bowers, who was a helicopter pilot, recalled being assigned as an observer on a light reconnaissance chopper going on a hunter-killer mission, about 30 miles southeast of Saigon. Flying low-level over the jungle treetops looking for the enemy, the helicopter ran into a heavy hail of automatic weapons fire, causing the engine to burst into flames before they crashed.

The pilot was pinned in the burning wreckage, which exploded as Bowers was trying to get him out. Bowers was able to move him to safety, but the pilot died months later in a Japanese hospital from burns over 50% of his body.

The Wednesday before, Bowers was presented his Silver Star in ceremonies at Ft. Benning, where he had been stationed since Dec. 23, 1970, when he finished his Vietnam tour of duty. When asked about his Purple Heart, Bowers brushed the question aside and said his injuries were minor — nothing to them. That same day, he received his discharge from service after being in the Army for two years and three months.