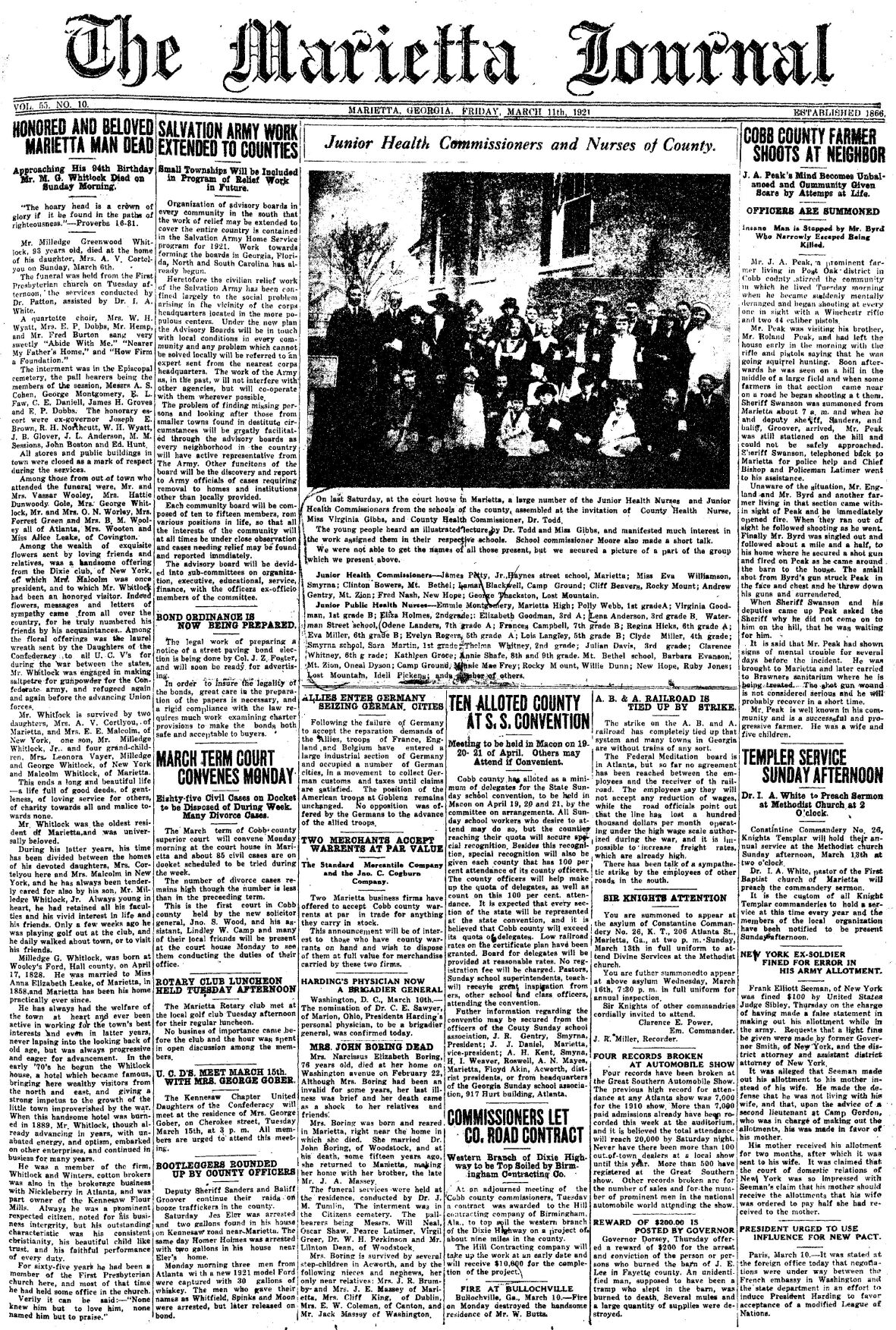 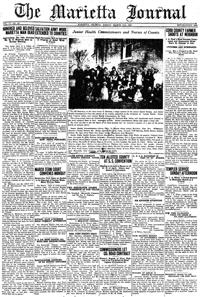 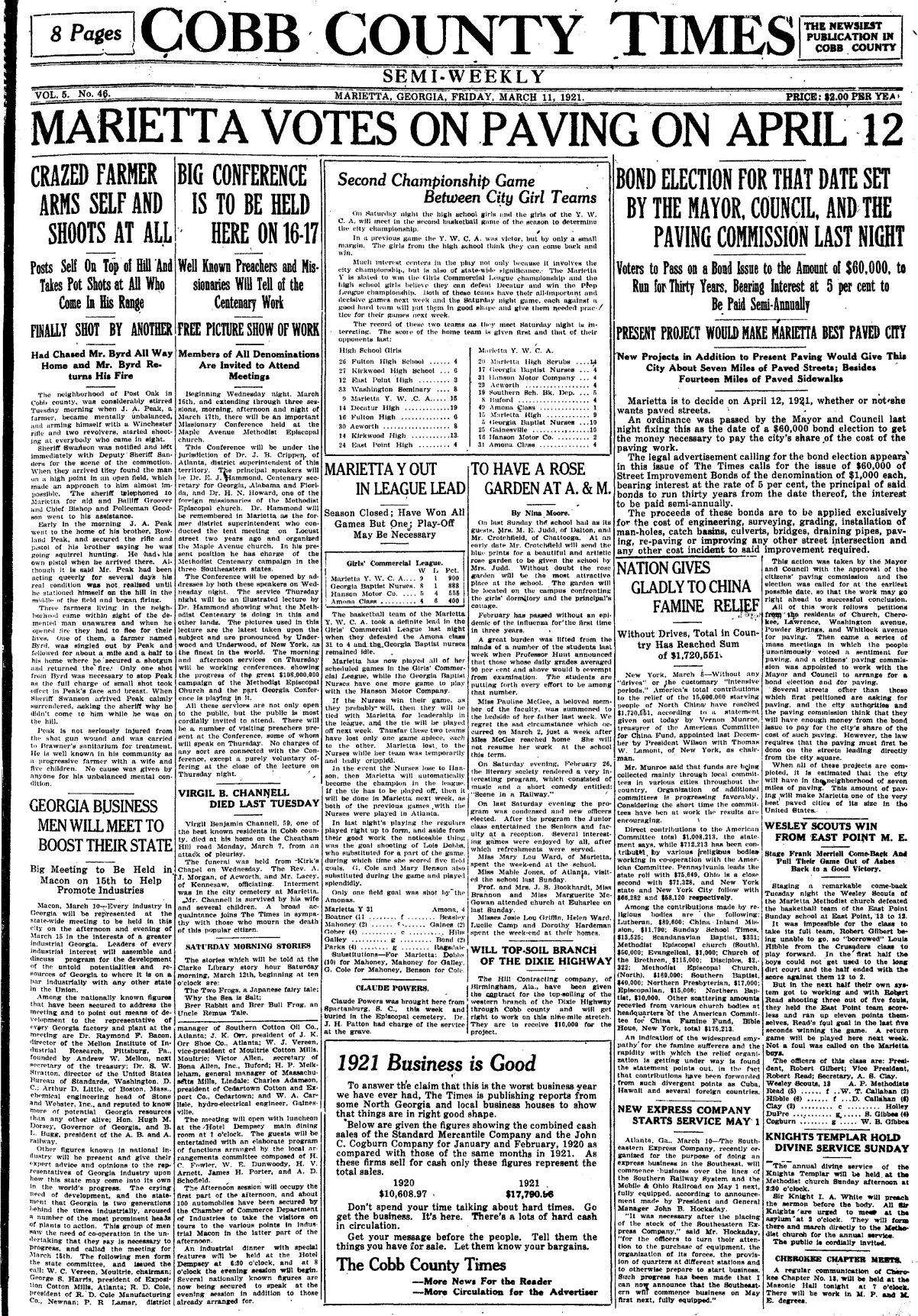 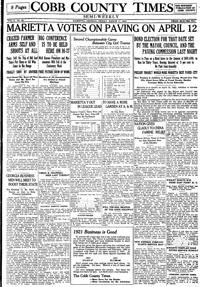 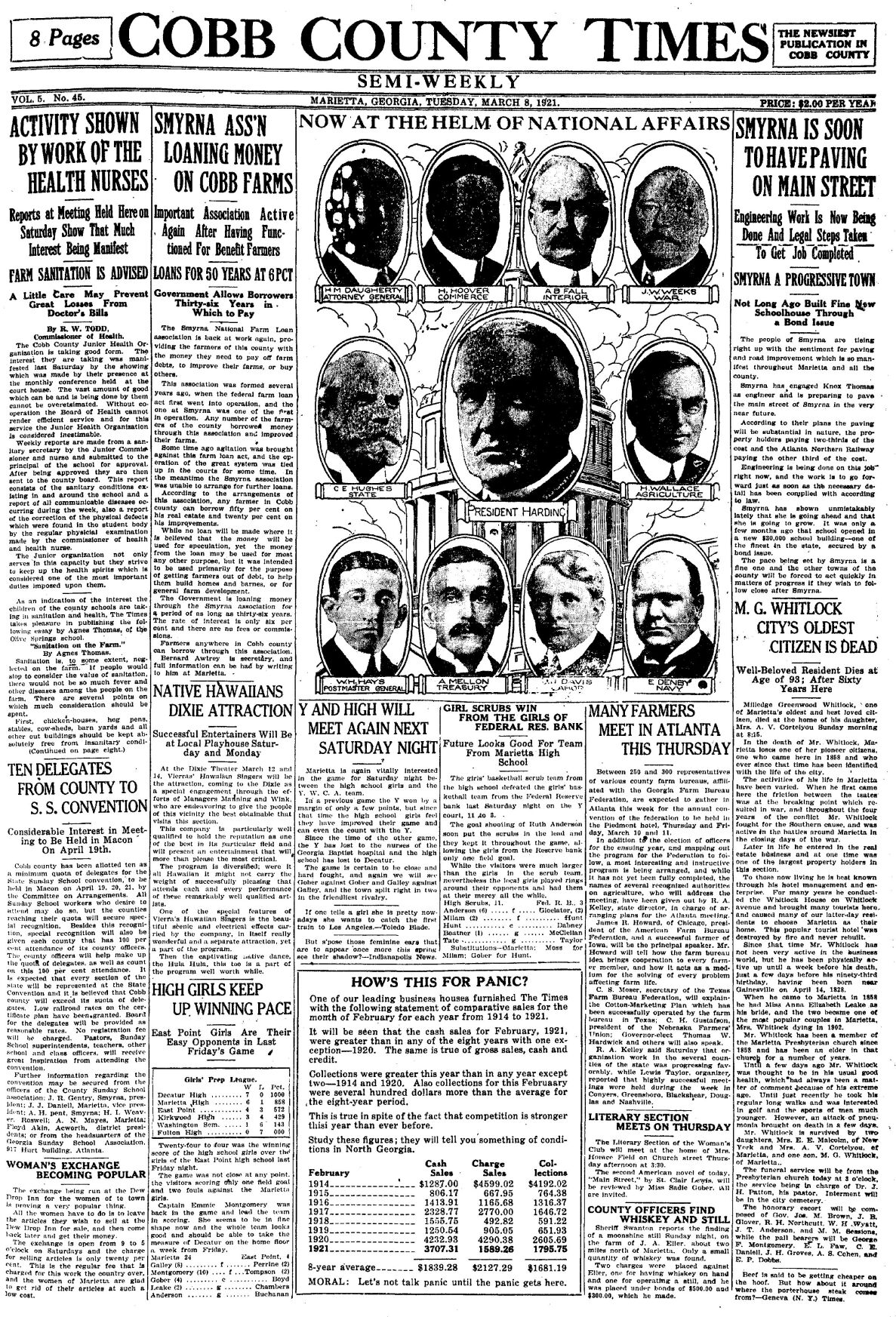 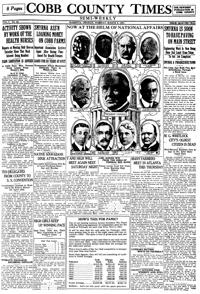 The front page of the Cobb County Times from Tuesday, March 8, 1921.

The front page of the Cobb County Times from Tuesday, March 8, 1921.

The Tuesday, March 8, 1921, edition of The Cobb County Times reported Milledge Greenwood Whitlock, one of Marietta’s oldest and best-loved residents, as having died at the home of his daughter, A.V. Cortelyou, the Sunday before. Whitlock, one of Marietta’s pioneer citizens, came to town in 1858. He fought for the South in the Civil War and was active in the battles around Marietta in the closing days of the war. Later in his life, he entered the real estate business and at one time was one of the largest property holders in the area. He was best known as running the Whitlock House on Whitlock Avenue. The popular tourist hotel was destroyed by fire and never rebuilt.

Sheriff Swanson was reported as finding a moonshine still the Sunday before on the farm of J.A. Eller, two miles north of Marietta. Only a small quantity of whiskey was found. A second story in that paper reported that county officers had captured a whiskey car in Marietta the Sunday before containing 45 gallons of moonshine whiskey. When the car was approached by officers, the three occupants jumped out and ran. They were quickly overtaken and brought to the Cobb County Jail.

The Friday, March 11, 1921, edition of The Cobb County Times reported that in the Post Oak neighborhood of Cobb County the Tuesday morning before, that well-known progressive farmer J.A. Peak became “mentally unbalanced” and armed himself with a Winchester rifle and two revolvers before shooting at everyone who came into sight.

Peak, who posted himself on top of a hill in the middle of a field, took pot shots at everyone that came into range. He was said to have chased a neighboring farmer by the name of Byrd for a mile and a half back to that man’s home before Byrd secured a shotgun and returned fire. “A full charge of small shot” from Byrd’s weapon caught Peak in the face and breast. Not seriously injured, the man surrendered to Sheriff Swanson and was carried off to Brawner’s sanitarium for treatment.

In the “News From Our Correspondents” column, the Pine Mountain section reported:

♦The youngest child of R.E. Sewell as almost having one of his fingers severed by an axe while playing with two of his older brothers the Friday before.

In the “News About the City” column, written by Mrs. Harold Hawkins, the following was reported:

♦Edward Simpson, who had been with the American Telegraph & Telephone Co. in Atlanta for some time, had been promoted to Birmingham and would serve as the chief clerk in that office.

♦Mrs. S.C. McEachern was confined to her room after having the misfortune of “sticking a nail in her foot” the Saturday before.

The Tuesday, March 5, 1946, edition of The Marietta Daily Journal reported that the mysterious death of Clara McCollum Buckner of Austell had led to the detention of eight people being held as material witnesses by the Atlanta Police. Buckner was found unconscious on the back doorstep at 425 Hoyt Street SW in Atlanta the Sunday before. Atlanta detectives said that she had “what appeared to be tooth marks on her thigh and throat, a cut on the back of her hand and a small abrasion over her right eye.”

A huge whiskey still was reported in the Wednesday, March 6, 1946, paper as having been raided the day before by Sheriff T.M. Sanders. Located on the Cobb and Paulding county line, the still was destroyed and 2,000 gallons of mash was poured out.

The Friday, March 8, 1946, Marietta Daily Journal reported that Marietta’s radio station was given the call letters WFOM. The announcement came from A.L. Jones, former chief engineer at WAGA in Atlanta, who would manage the radio station. The Chattahoochee Broadcasters, Fred B. Wilson and Channing Cope, purchased $30,000 in equipment and planned to erect a station and tower on 13 acres of Fred Myers’ property in Marietta as soon as it was approved by the Federal Communications Commission.