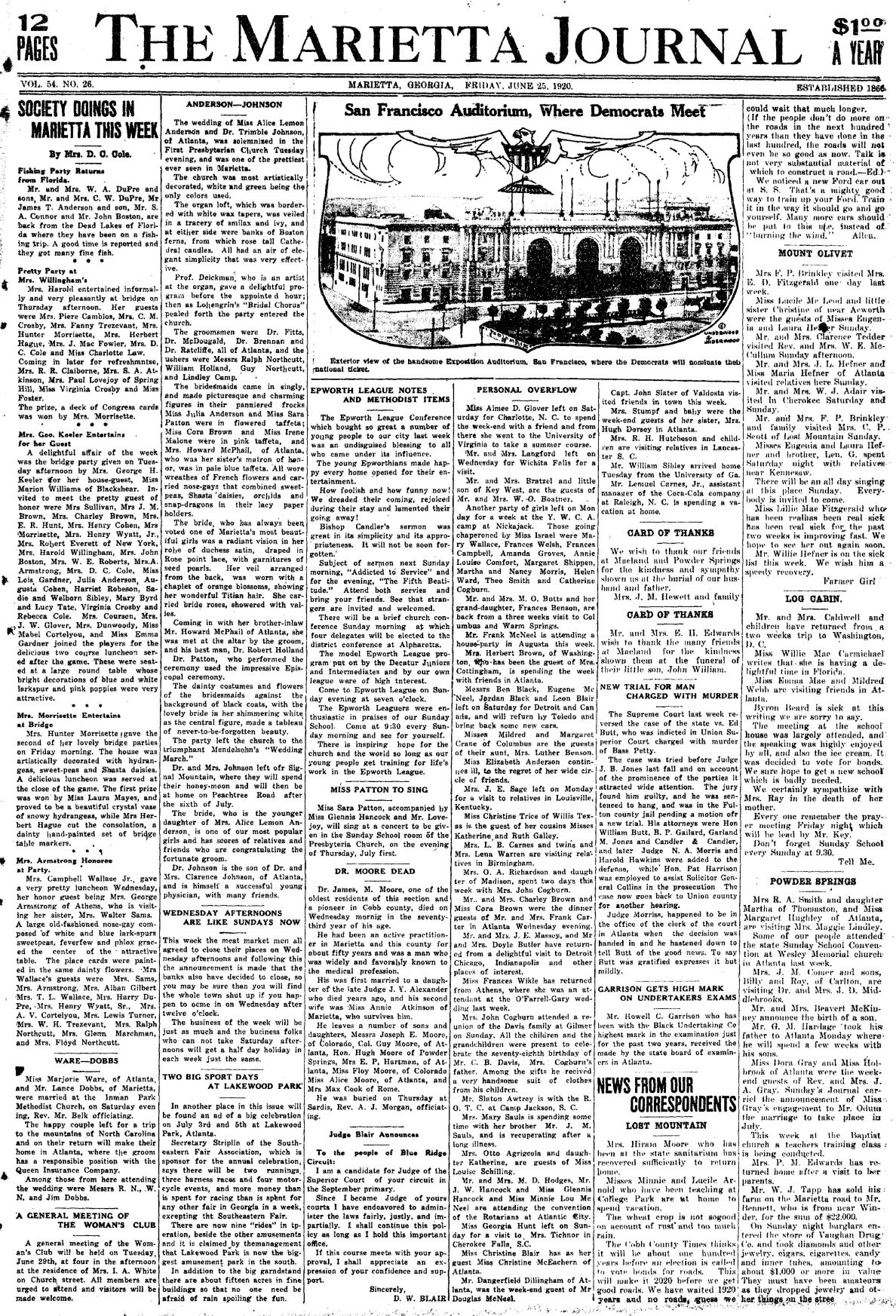 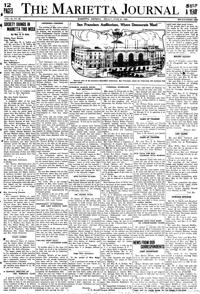 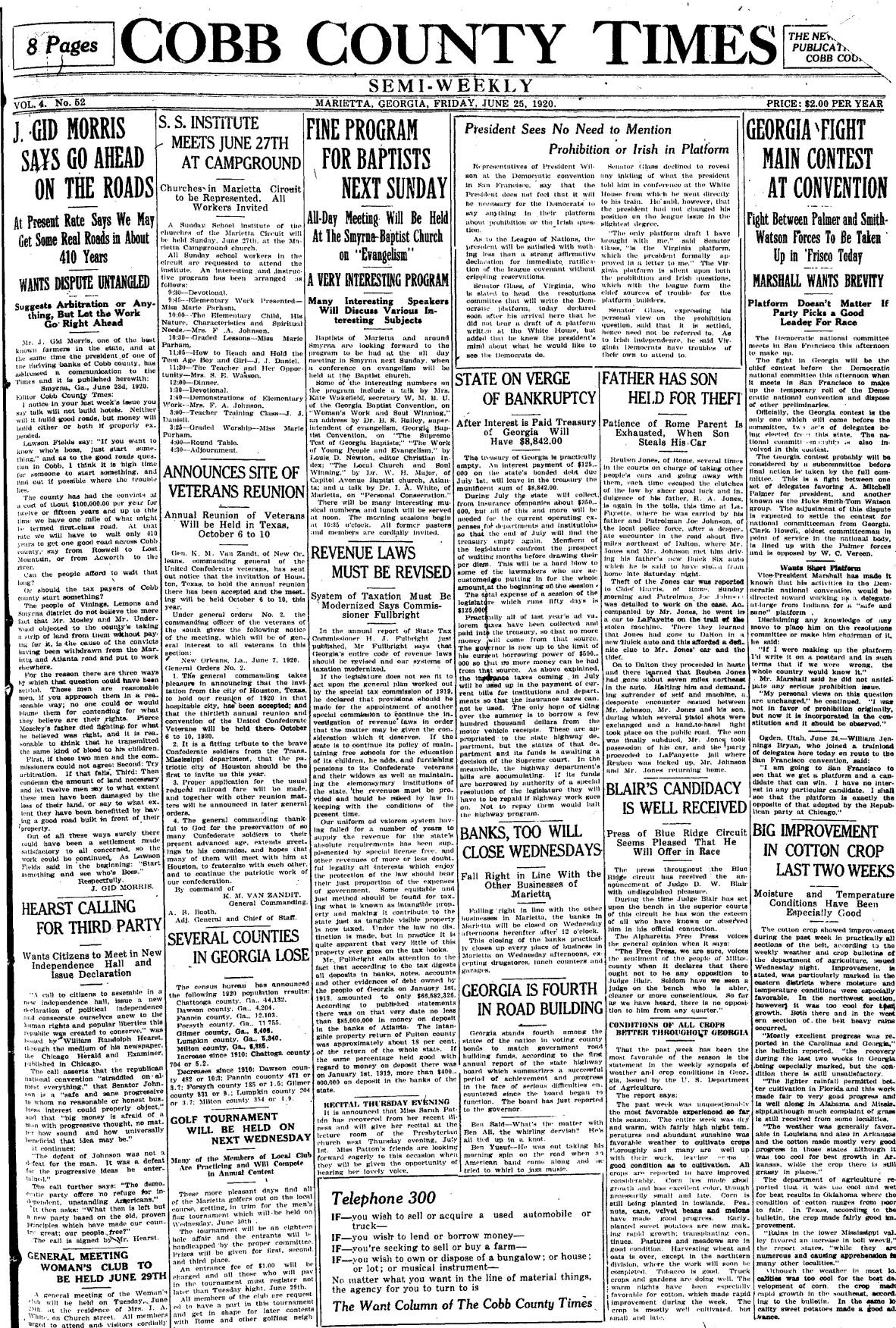 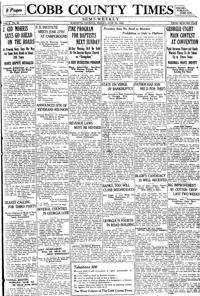 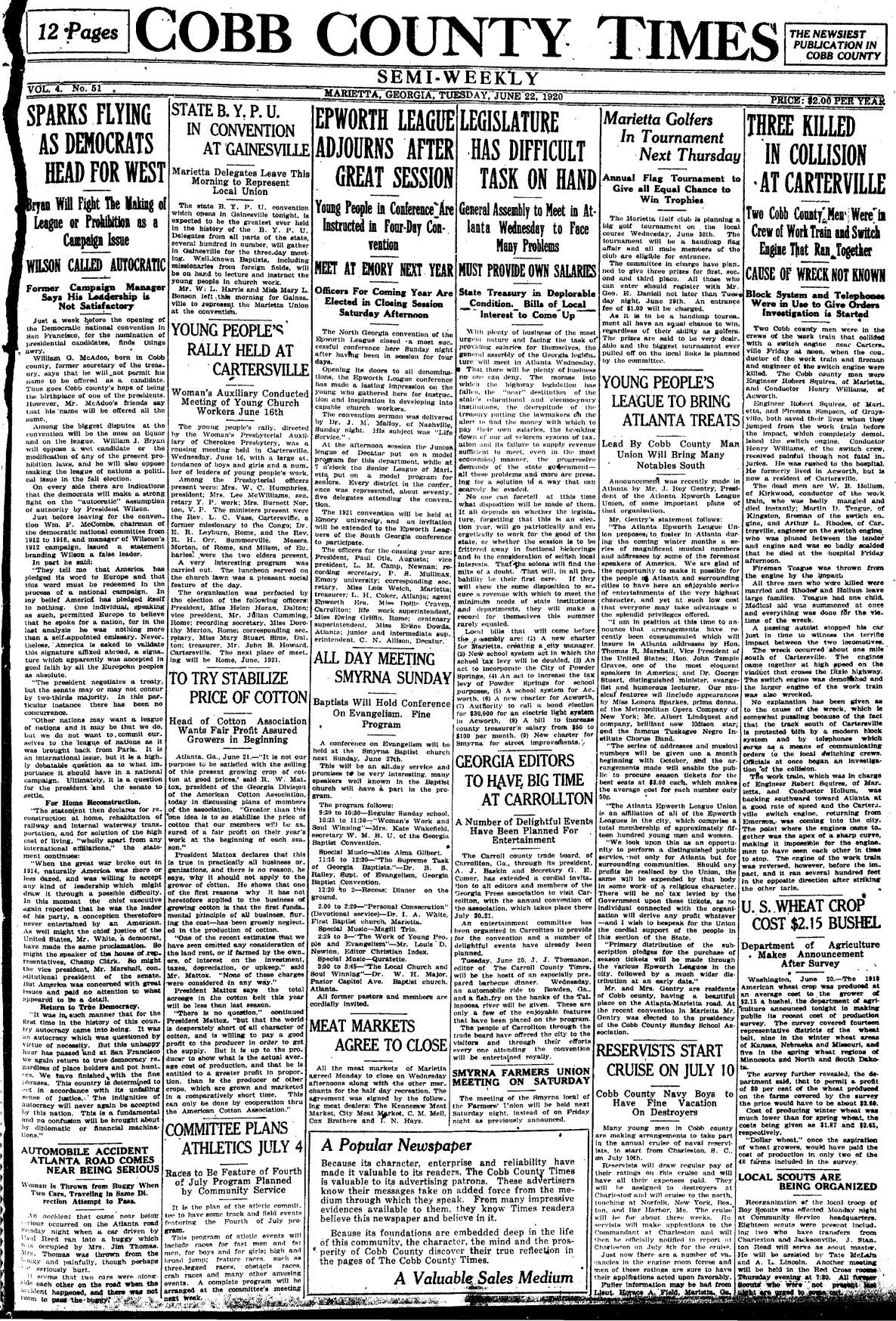 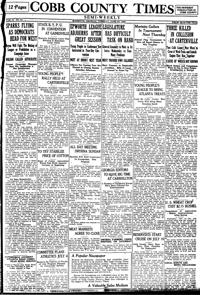 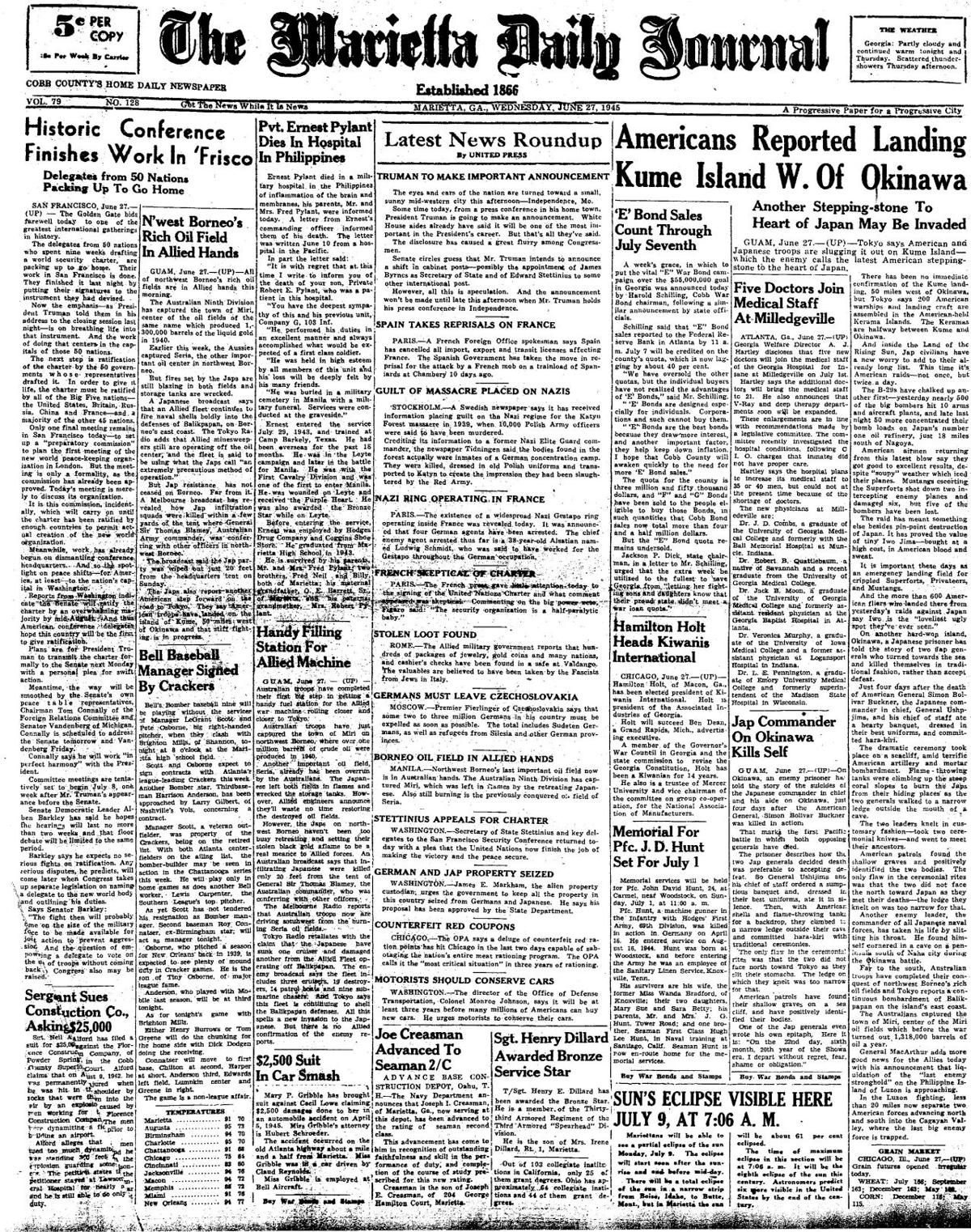 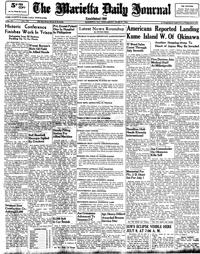 The Tuesday, June 22, 1920, edition of The Cobb County Times reported that two Cobb men were in the crews of two trains that collided one mile south of Cartersville the Friday before at noon. The conductor of “the work train” and the fireman and engineer of “the switch engine” were killed.

Engineer Robert Squires of Marietta and a fireman from Graysville were saved by jumping from the work train before the impact, which completely demolished the switch engine. Conductor Henry Williams of Acworth, who was on the switch crew, suffered painful, non-fatal injuries and was rushed to the hospital.

The dead men were W.B. Hollum of Kirkwood, conductor of the work train, who was badly mangled and died instantly; Martin D. Teague of Kingston, fireman of the switch engine; and Arthur L. Rhodes of Cartersville, engineer on the switch engine, who was pinned between “the tender and engine” and was so badly scalded that he died in the hospital that afternoon.

Another serious accident was reported as happening the Sunday night before on Atlanta Road when a car driven by Paul Reed ran into a buggy, causing Mrs. Jim Thomas to be ejected and seriously hurt. The accident happened because the car tried to pass the buggy and there was not enough room on the road for them both.

The Marietta Journal later that week also carried the story and added that the incident occurred at the Jonesville crossing with the buggy being completely demolished. In this report, all three members of the Thomas family were said to have been ejected and that Mrs. Thomas was the worst injured, being unconscious for several hours.

The Friday, June 25, 1920, edition of The Marietta Journal reported in the Powder Springs section of the “News From Our Correspondents” column that burglars entered the Vaughan Drug Co. the Sunday before and stole over $1,000 in diamonds, jewelry, cigars, cigarettes, candy and inner tubes. The correspondent said “they must have been amateurs as they dropped jewelry and other things on the street.”

The following items were in the Friday, June 22, 1945, Marietta Daily Journal:

♦A 15-year-old boy was being held by Marietta Police in an investigation into the attempt to burglarize the Strand Theatre safe. The burglar, who made the attempt the Thursday before, was able to get the outer doors off the safe’s hinges, but failed to get into the inner compartment.

♦Orville Ham of Hansell Street in Marietta was reported as being home on a 60-day furlough after spending six months in Stalag 12-A, near Lemburg, Germany. Ham said the happiest moment in his life was when he saw a U.S. tank roll into the prison camp and the tank men threw the prisoners some cigarettes. Orville, who received the Purple Heart for being shot in the hand before being captured, was one of the five Ham boys in the service. Hollis was a staff sergeant in the South Pacific; LeRoy was a staff sergeant in Germany; Bill was a technical sergeant in Germany; and Robert was a sergeant in Germany. Hollis, LeRoy and Robert were also reported as having received Purple Hearts.

J.C. Lovell and Mattie B. Lovell were reported in the Monday, June 25, 1945, paper as having filed a $500 suit in Cobb County Superior Court against W.L. Florence Construction Company of Powder Springs claiming damage was done to their house in October 1943 that was caused by dynamite. The suit alleged men working for the company used dynamite in building an airport on the Dalton highway and cracked the foundation and broke both the plaster and windows on their home in Floyd County.

In the Wednesday, June 27, 1945, paper Sgt. Neil A. Alford also filed a $25,000 suit against the company for being permanently injured on Aug. 9, 1942, when he was hit in the shoulder by rocks that were thrown into the air by a dynamite explosion in the airport construction. Alford claimed he was 300 feet away from the explosion guarding some prisoners when he was struck.

The Wednesday paper also reported that the parents of Pvt. Ernest Pylant of Marietta received a letter dated June 10, 1945 from his commanding officer informing them of his death in a military hospital in the Philippines from inflammation of the brain and membranes. Pylant, a member of the First Cavalry Division, was buried in a military cemetery in Manila with a military funeral. He was wounded on Leyte and received both the Purple Heart and Bronze Star.