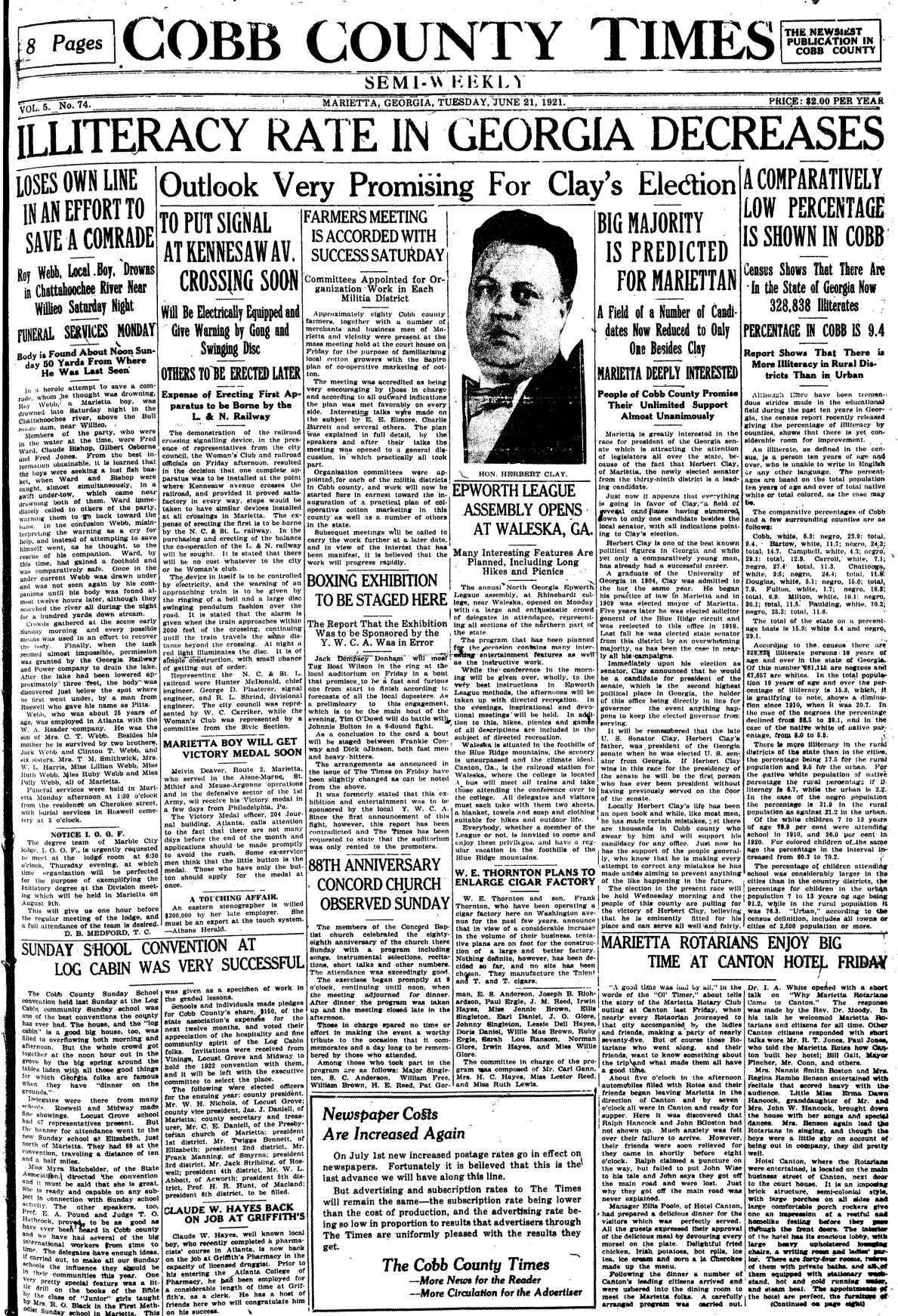 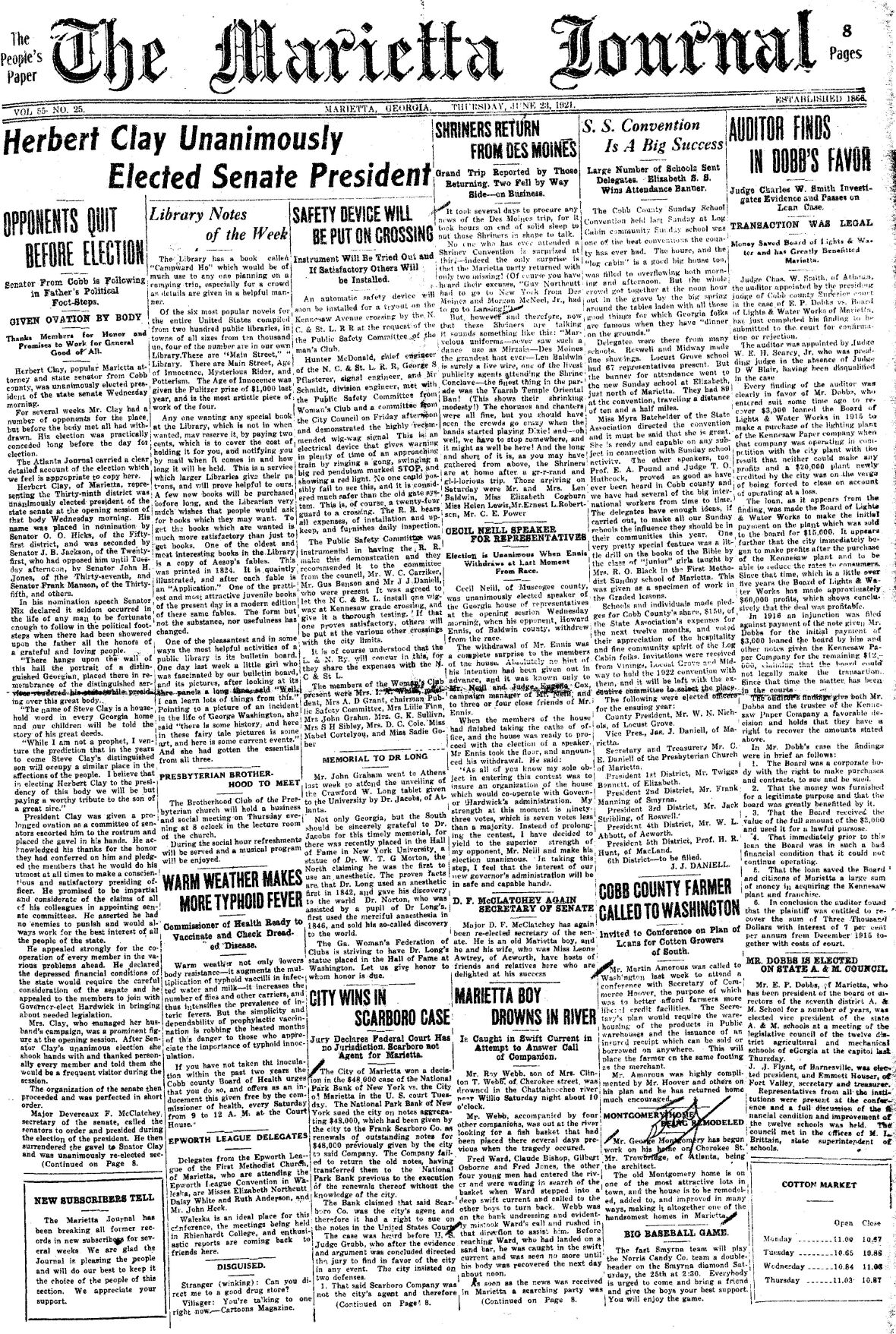 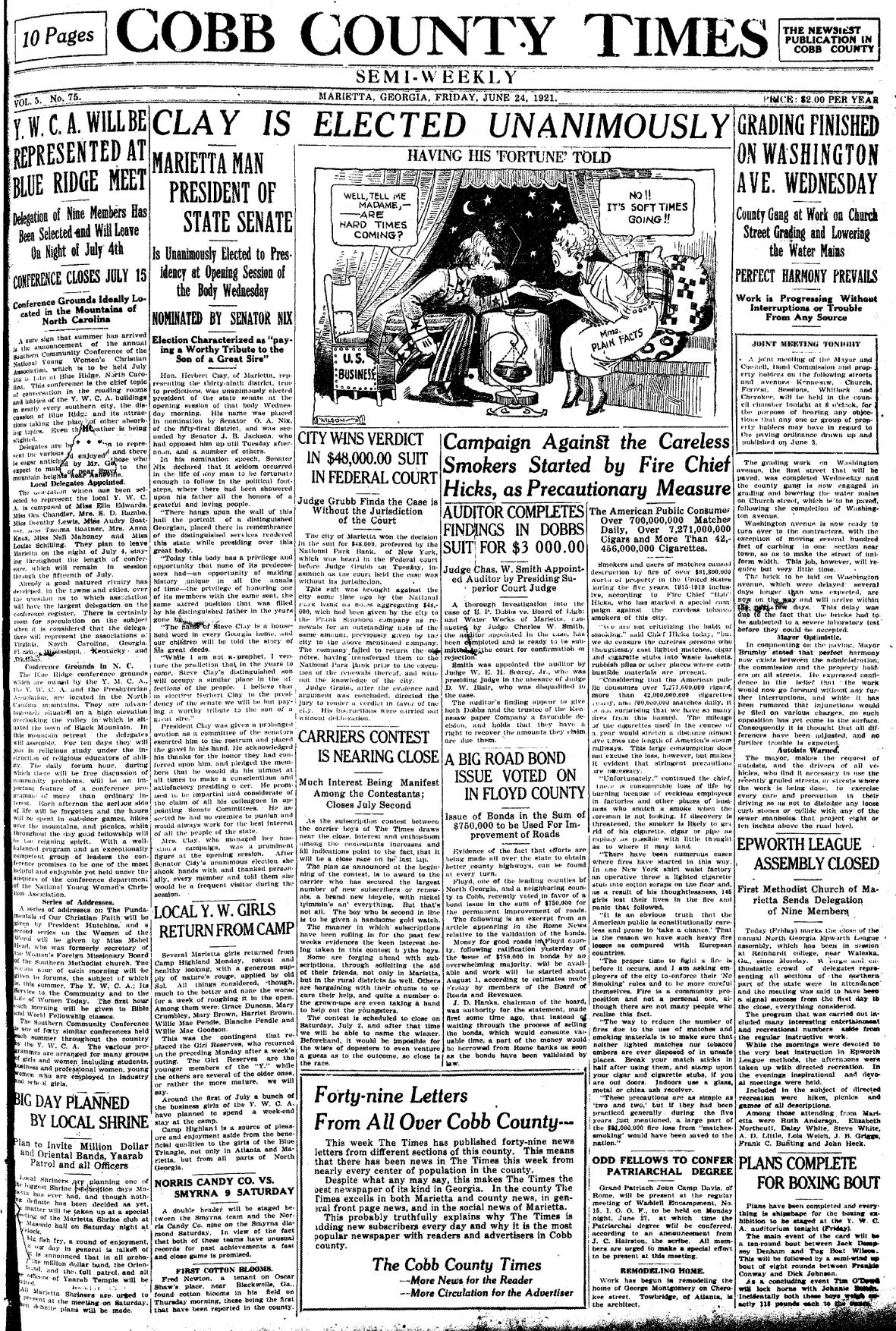 The Tuesday, June 21, 1921, edition of The Cobb County Times reported that Roy Webb, 25, of Marietta drowned in the Chattahoochee River, above the Bull Sluice Dam near Willeo, the Saturday before. Fred Ward, Claude Bishop, Gilbert Osborne and Fred Jones were fishing in the river that day.

Ward and Bishop were out in the water, searching for a lost fish basket, when they were caught in a swift undertow that nearly drowned them. Ward called out a warning to the other two members of the party to go back toward the bank.

Webb, misinterpreting Ward’s warning as a cry for help, attempted to save the other man who had by then gotten a good foothold and was safe. Webb went under the water and wasn’t seen again until his body was found 12 hours later and 50 yards away.

The demonstration of an electrically equipped railroad crossing signaling device in front of the city council, the Woman’s Club and railroad officials the Friday before resulted in the decision of having one installed at the point where Kennesaw Avenue crossed the railroad tracks in Marietta. The signal, being erected at the expense of the Louisville & Nashville Railway, gave “warning by gong and swinging disc.”

In the Thursday, June 23, 1921, edition of The Marietta Journal, sounding similar to the COVID-19 vaccinations here in modern times, it was reported that the Cobb County Board of Health was urging residents to get a Typhoid Fever inoculation. The article stated that “warm weather not only lowers body resistance — it augments the multiplication of typhoid vaccilli in infected water and milk — it increases the number of flies and other carriers, and thus intensifies the prevalence of interic fevers.” The Board was offering free inoculations every Saturday from 9 a.m. to noon at the courthouse.

The editors also wrote the following items on the Editorial Page:

♦”Let us all try to remember that during the hot weather that any bits of refuse thrown out in the open is a call for flies in swarms, and flies carry disease. If everyone would see that they had nothing around their dooryard to call the flies our little village would be more free from disease than at present.”

♦”In the beginning God created Heaven and Earth and all things therein. He then created Man and Woman and left the loafers on the corners, and in due time they multiplied and spread into the depot, post office and store where they sit and explain state and national problems.”

In the “News From Our Correspondents” column, the Log Cabin section reported that the Cobb County Sunday School Convention met at the Cabin the Sunday before with 500 people present. The Smyrna Quartette sang several songs. The banner was awarded to the Elizabeth Sunday School, who had 89 delegates. A large dinner was spread in the grove and Will Nichols was elected president for the year.

The Wednesday, June 19, 1946, edition of The Marietta Daily Journal reported that Carolyn Benzinger of Smyrna was seriously injured the day before when the private plane in which she was flying crashed during take-off in Knoxville. A student at the University of Tennessee, Benzinger was taking off for Atlanta in a plane piloted by William Camper, who was less seriously injured.

The Tuesday, June 22, 1971, edition of the paper reported that the two Navy Skyhawk jet fighters that collided the Sunday before over Rome were practicing “dogfight” maneuvers, according to the Naval Aviation Accident Board. The mid-air collision claimed the life of Naval Air Reservist Lt. Fred R. Boardman, a 33-year-old Atlanta native. The other pilot ejected from his plane and parachuted safely to earth.

Four people were reported in the Thursday, June 23, 1971, paper as having been killed in an early morning fire which destroyed a small, three-room frame house on a remote section of Orchard Road near Vinings. The fire was reported at 12:17 a.m. but the house had burned to the ground by the time firemen from the Lemon-Vinings Station of the Cobb Fire Department arrived five minutes later. There was no electricity serving the home, and no plumbing. The occupants got their drinking water from a small spring about 50 yards into the woods. A small, heavy cast-iron stove lying in the smoldering rubble was believed to be the cause of the fire.