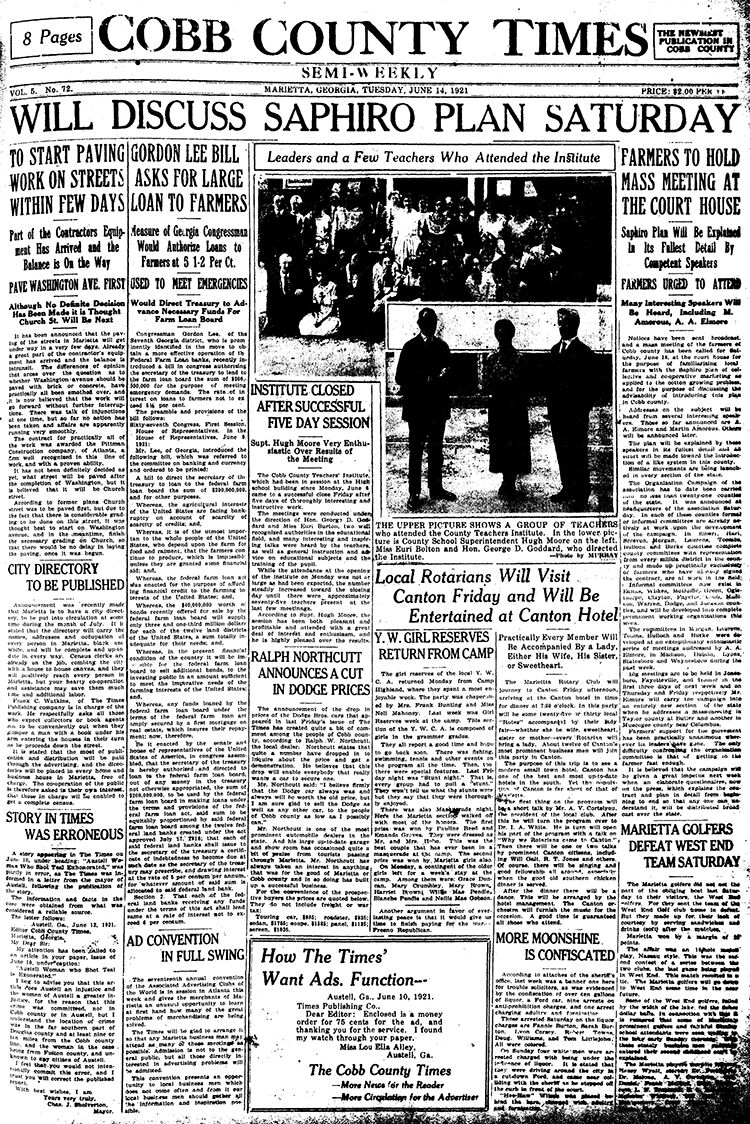 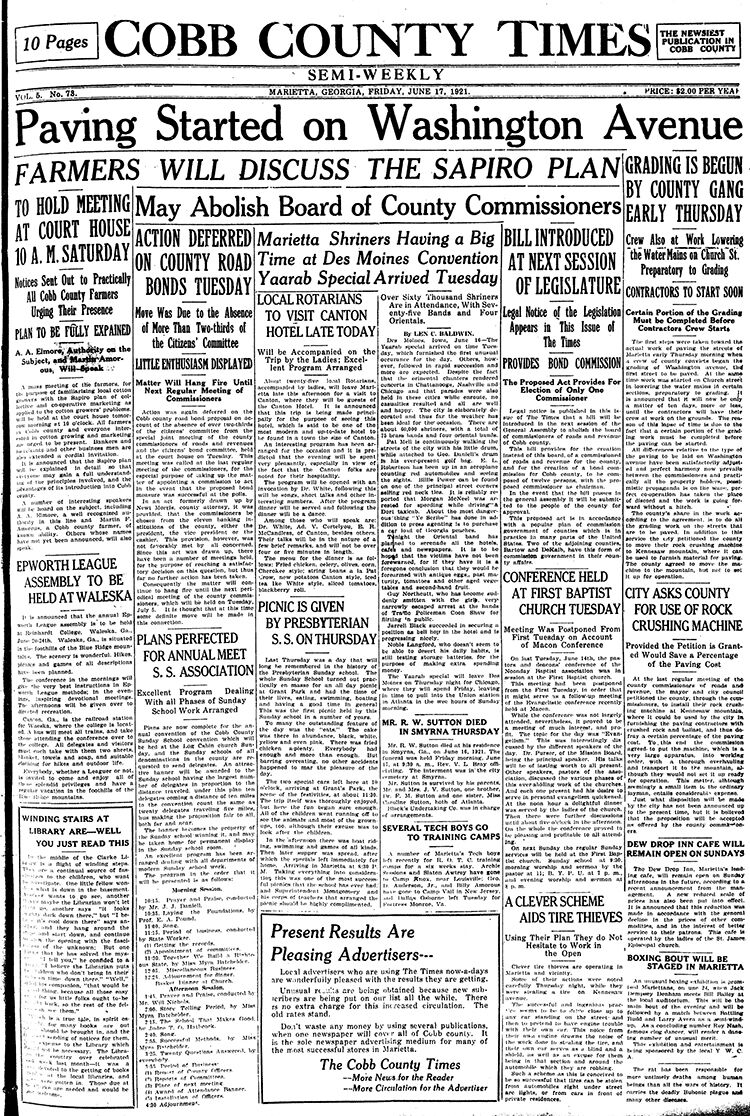 The Tuesday, June 14, 1921, edition of The Cobb County Times reported that the Sheriff’s Office last week confiscated over 10 gallons of liquor, a Ford car and nine arrests on anti-Prohibition charges. Among the arrests were four white men who were driving around Marietta in a “cut-down Ford” and almost struck the Sheriff as he was stepping off the curb in front of the courthouse.

The Friday, June 17, 1921, edition of The Cobb County Times reported that the first steps were taken toward the actual work of paving the streets of Marietta the Thursday before when a crew of county convicts began the grading of Washington Avenue, the first street to be paved. At the same time, work was started on Church Street in lowering the water mains in certain sections to prepare for grading.

The Marietta YWCA was reported as sponsoring a boxing exhibition on June 24, 1921 between Jack Dempsey Denham and Bill Bailey at the Marietta auditorium. Following the main bout was a match between Battling Budd and Larry Avera, and the concluding act was a performance by famous clog dancer Roy Nash.

The “News From Our Correspondents” column had the following items:

♦The Kennesaw section reported that the remains of William McNeeley, who died overseas during World War I in November 1918, arrived in Atlanta on June 7, 1921 and were interred at the Roswell cemetery. He was the son of J.W. McNeely of Kennesaw.

♦The Millford section reported that there would be a working day at the Millford School House the next day for grading the playgrounds, cleaning the floors and fixing the well.

The Wednesday, June 12, 1946, edition of The Marietta Daily Journal reported that a burglar broke into an Acworth service station through a back window and stole a cash register, which contained only a few pennies.

♦Milk flowed down Campbell Hill Street after a Creatwood Dairy truck’s brakes gave out and it ran 300 feet down hill before crashing into a light pole. The truck driver had parked on a hill near the intersection of Hillside Avenue and Campbell Hill Street to make a delivery when the incident happened. There were about 50 bottles of milk broken, which was half of the truck’s load.

♦Robert Gunn, 26, who served 8 1/2 years on a 10-year prison sentence, was reported as still being at large after escaping the day before from the Cobb County Prison Farm. He was headed south out of Cobb County when bloodhounds lost his trail at Sweetwater Creek. Gunn escaped while working near Austell. During his prison term, Gunn escaped five times, but had been recaptured after each. Convicted in Jasper in November 1938, Gunn was serving two five-year sentences for burglary.

♦Marietta Police Chief Harold Griggs made two announcements. The first was that the parents of the five and six-year-old children who had been rifling mail boxes in Clay Homes had been warned to take measures with them. The second was that the identity of the juveniles involved in the Pine Forest mass window breaking were known to the police, but no arrests had been made yet. Approximately 35 windows had been broken in Pine Forest Homes and in the nursery in the last few weeks.

Bennie Kaplan, a Marietta merchant, and Isadore Jake Dorfan of Atlanta were reported in the Sunday, June 16, 1946, paper as having been arrested the day before and charged with receiving and possessing Arrow shirts that were stolen from an interstate shipment, according to John F. Trost, special agent in charge of the Atlanta Field Division of the FBI.

Trost revealed that 27 cases of white Arrow shirts, consisting of 125 dozen, were picked up from the Cluett Peabody Company in Atlanta by the Dixie Ohio Express Company for delivery to authorized Arrow dealers in Ohio. The shirts were taken to a warehouse of the express company and on June 8, 1921, there were 24 cases missing.

The Peabody Company, makers of Arrow shirts, told Atlanta police that Kaplan’s store was selling white Arrow shirts for $3.98 each and that he was not an authorized dealer.

Upon questioning by the FBI and Marietta Police Chief Harold Griggs, Kaplan admitted to buying 118 dozen men’s white shirts at $18 a dozen from Korfan on June 8, 1921, and placing them on sale in his Marietta store. One hundred and thirteen stolen shirts were recovered in Kaplan’s Marietta warehouse.