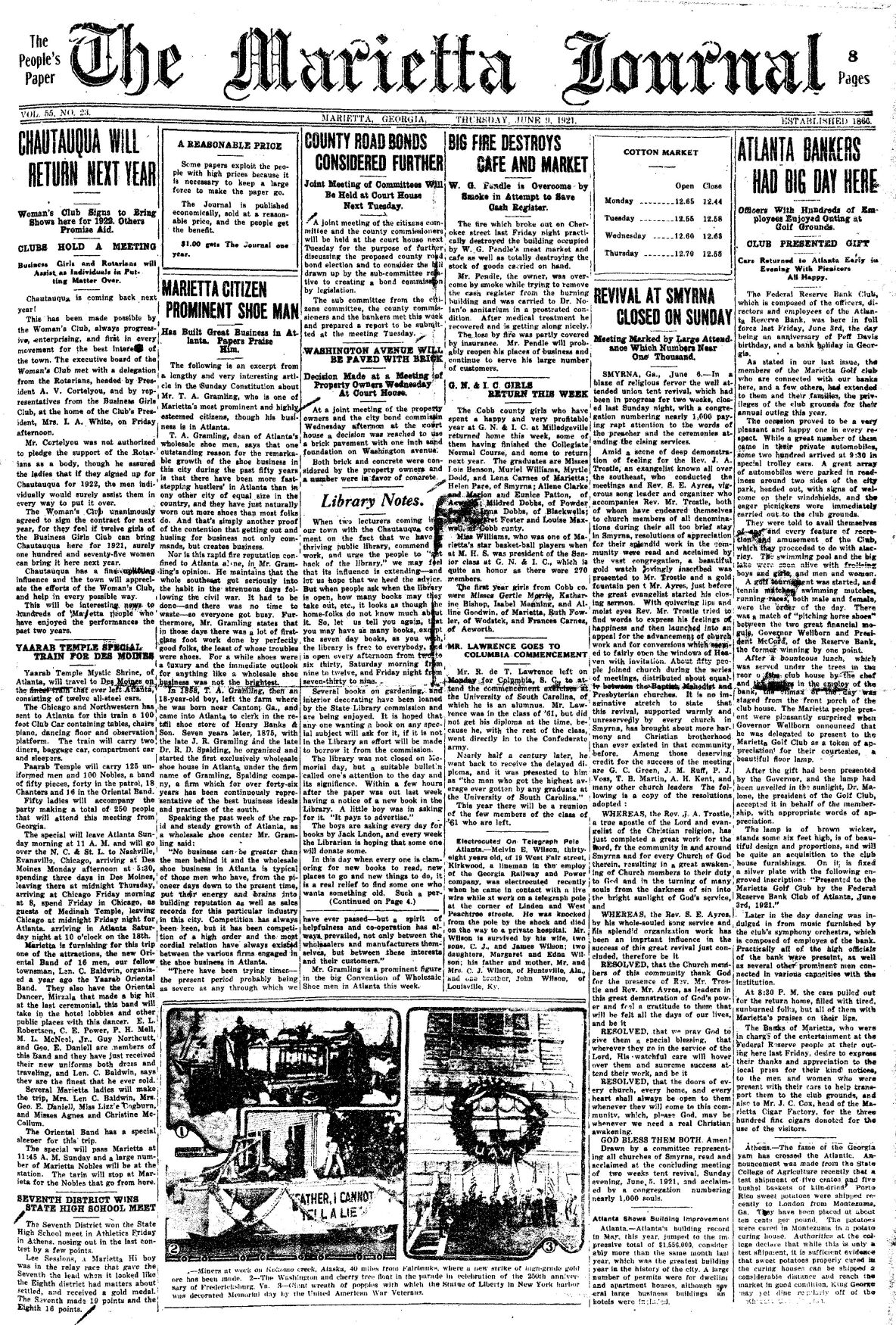 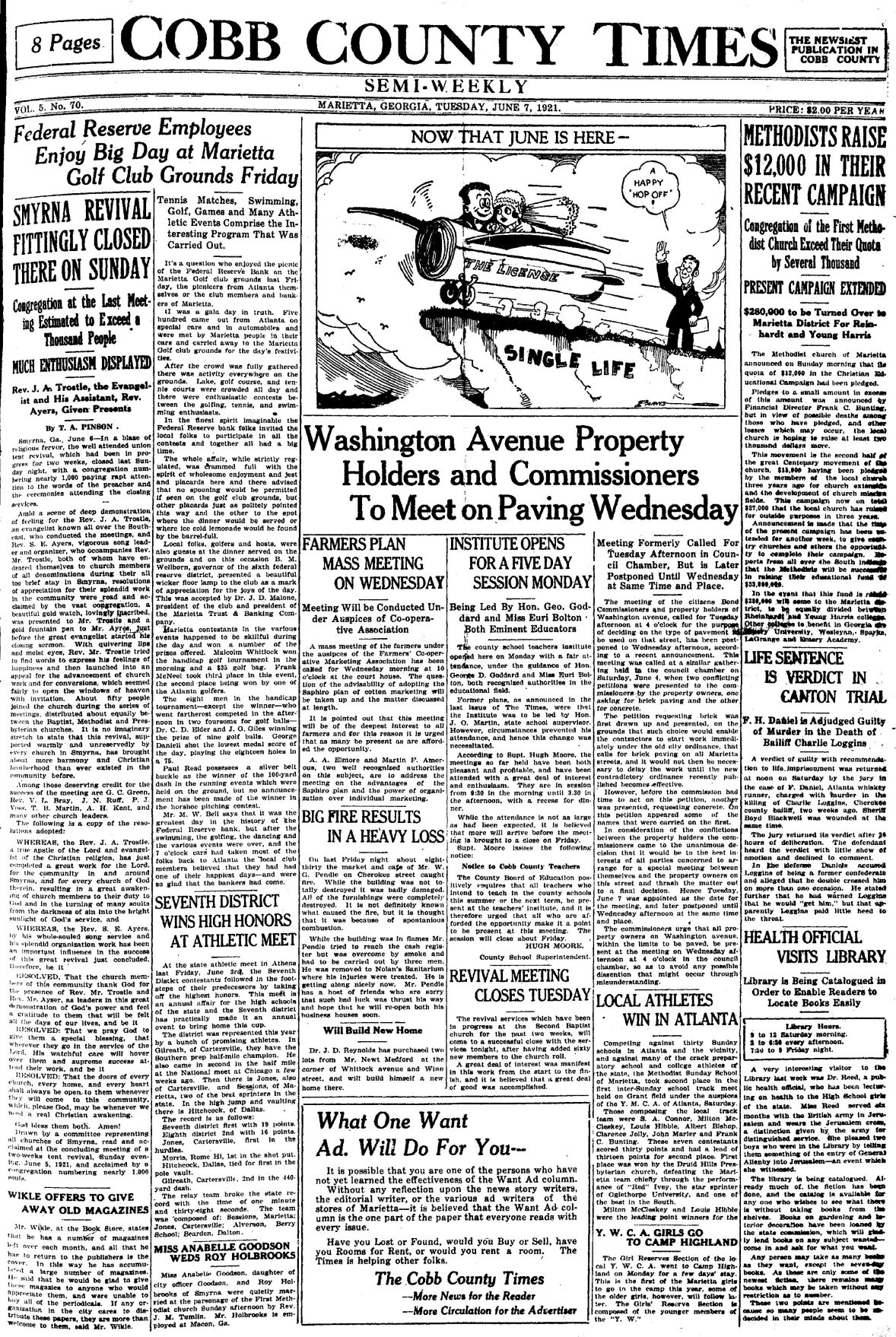 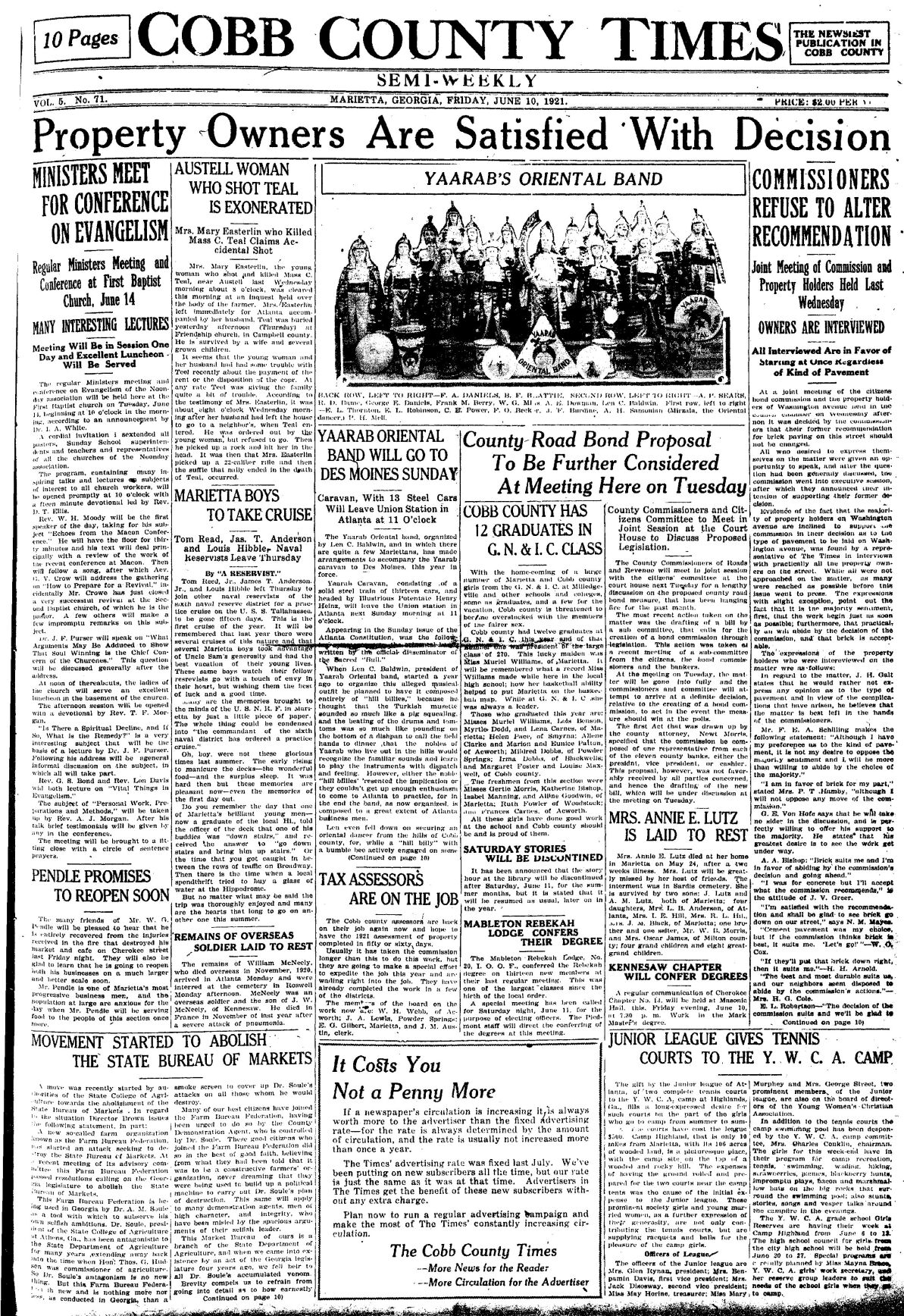 The Tuesday, June 7, 1921, edition of The Cobb County Times reported that W.G. Pendle’s market and cafe caught fire the Friday before. The building was badly damaged and all of the furnishings were completely destroyed. The cause of the fire was believed to be “spontaneous combustion.”

While the building was on fire, Pendle tried to reach the cash register but was overcome by smoke. He had to be carried out by three men and taken to Nolan’s Sanitarium.

In the “News From Our Correspondents” column, the Kennesaw section reported that Harmon Thomas arrived in Kennesaw to be buried in the city cemetery beside his mother, Elasie Roberts Thomas. Harmon was wounded in France about three years earlier during WWI.

The large 2-ton truck of the Nu-mint Bottling Company of Atlanta “turned turtle” on Atlanta Road the Monday before returning to Atlanta from a trip to Marietta. The accident took place near Gilmore Station, just past the Vinings underpass. Some 65 cases of soft drinks were destroyed, but the driver leaped clear and escaped injury.

The Friday, June 10, 1921, edition of The Cobb County Times reported that Mary Easterlin, the young woman who shot and killed Mass C. Teal near Austell the Wednesday before, was cleared by inquest held over the body of the farmer.

Mrs. Easterlin and her husband had trouble with Teal regarding either the payment of rent or the disposition of the crops. According to Mrs. Easterlin’s testimony, Teal entered the house after her husband had left Wednesday morning to visit a neighbor. She ordered Teal out, but he refused to go, picked up a rock and hit her in the head. That was when Mrs. Easterlin picked up a .22-caliber rifle and, during a scuffle, Teal was accidentally shot.

The remains of William McNeely, who died overseas in November 1920, were buried at the cemetery in Roswell. McNeely was a WWI soldier who died in France after “a severe attack of pneumonia.”

The Tuesday, June 4, 1946, edition of The Marietta Daily Journal reported on the memorial services for Emory W. Dunton of Austell at Midway Church. Dunton was a former machinist’s mate first class on the U.S.S. Swordfish, a submarine, during WWII. He was declared dead by the Navy Department after the submarine did not return to Pearl Harbor on Jan. 29, 1945, as scheduled. Three days before Christmas 1944, the submarine left Pearl Harbor for patrol duty in the Okinawa area. His wife had recently received a copy of a citation awarded to Dunton that said “he contributed materially to his vessel’s many successful attacks against the enemy.”

A man arrested on Canton Highway on drunken driving charges was reported in the Friday, June 7, 1946, paper as having his bail jumped up by $1,000 after the discovery of a load of illegal liquor in the truck that he was driving. The man’s bond was originally $200, but it climbed higher after the arresting officers discovered a false panel in the front part of the body. Inside the panel was an 80 cubic foot chamber that held 130 gallons of unstamped whiskey.

Thomas Clay, 27, a WWII Purple Heart winner, was reported in the Monday, June 10, 1946, paper as having died that morning in Veterans’ Hospital 48 from wounds received Feb. 28, 1945 at the Belgium Bulge in Germany.

Clay left Marietta with the first group of Battery E, 214th Coast Artillery on Oct. 16, 1939. After serving 19 months in Newfoundland, he was sent to the European Theater and served in Belgium, Luxembourg and Germany.

A technical sergeant, Clay was a Paulding County native that moved to Marietta in 1938. He served overseas with the 304th Infantry.