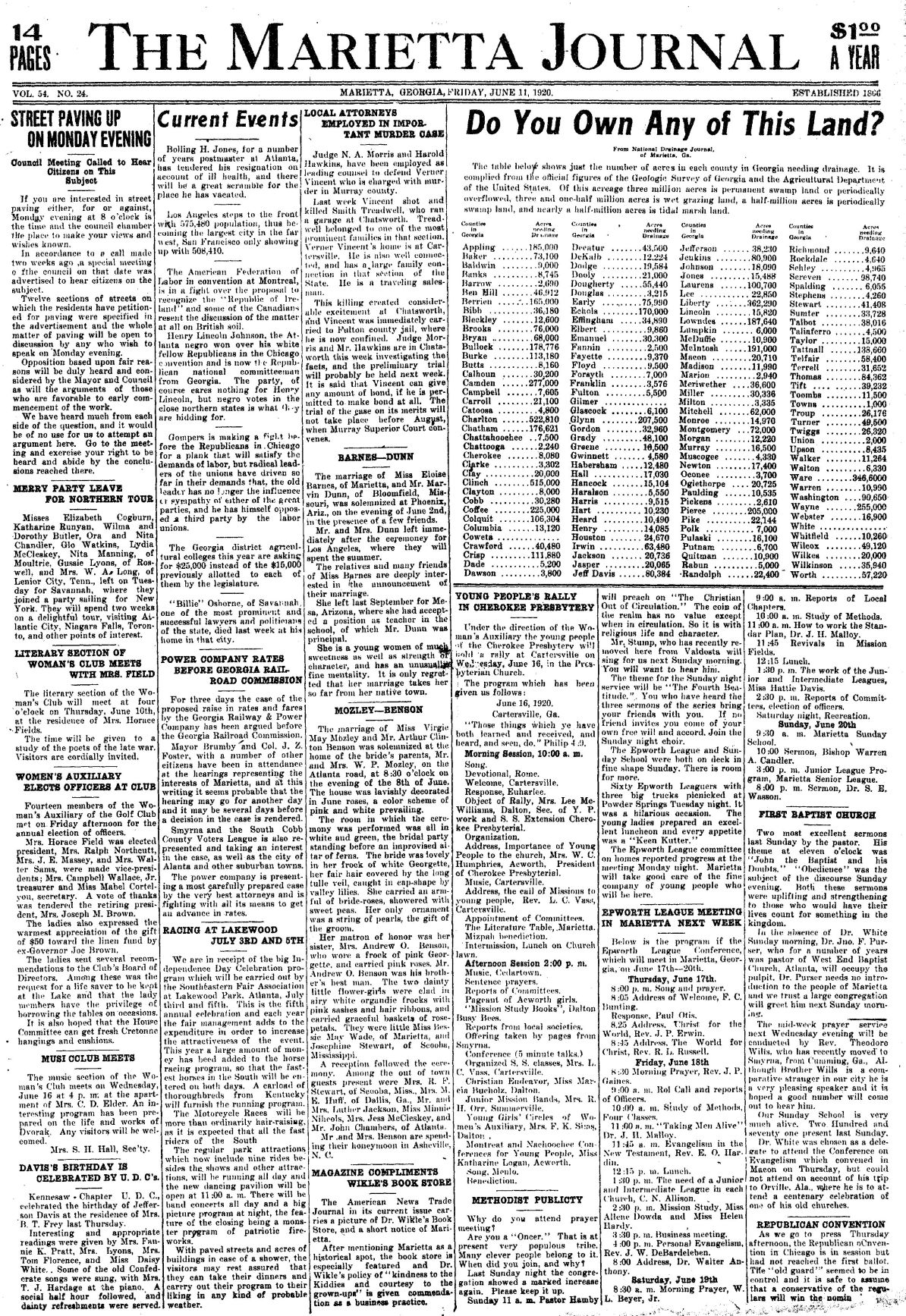 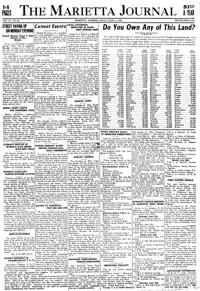 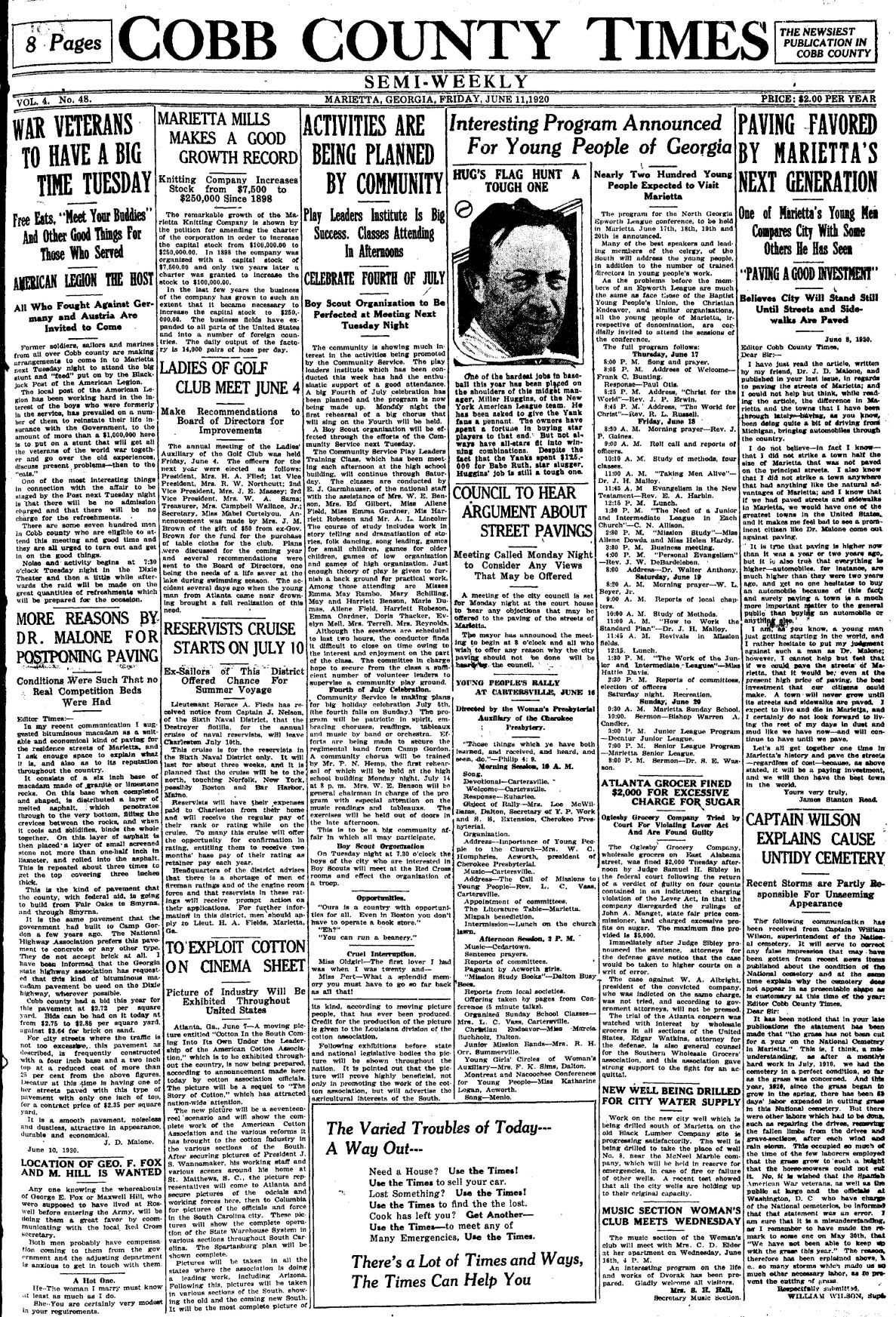 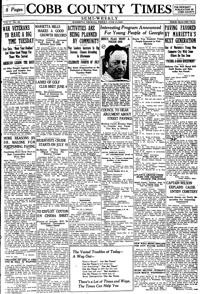 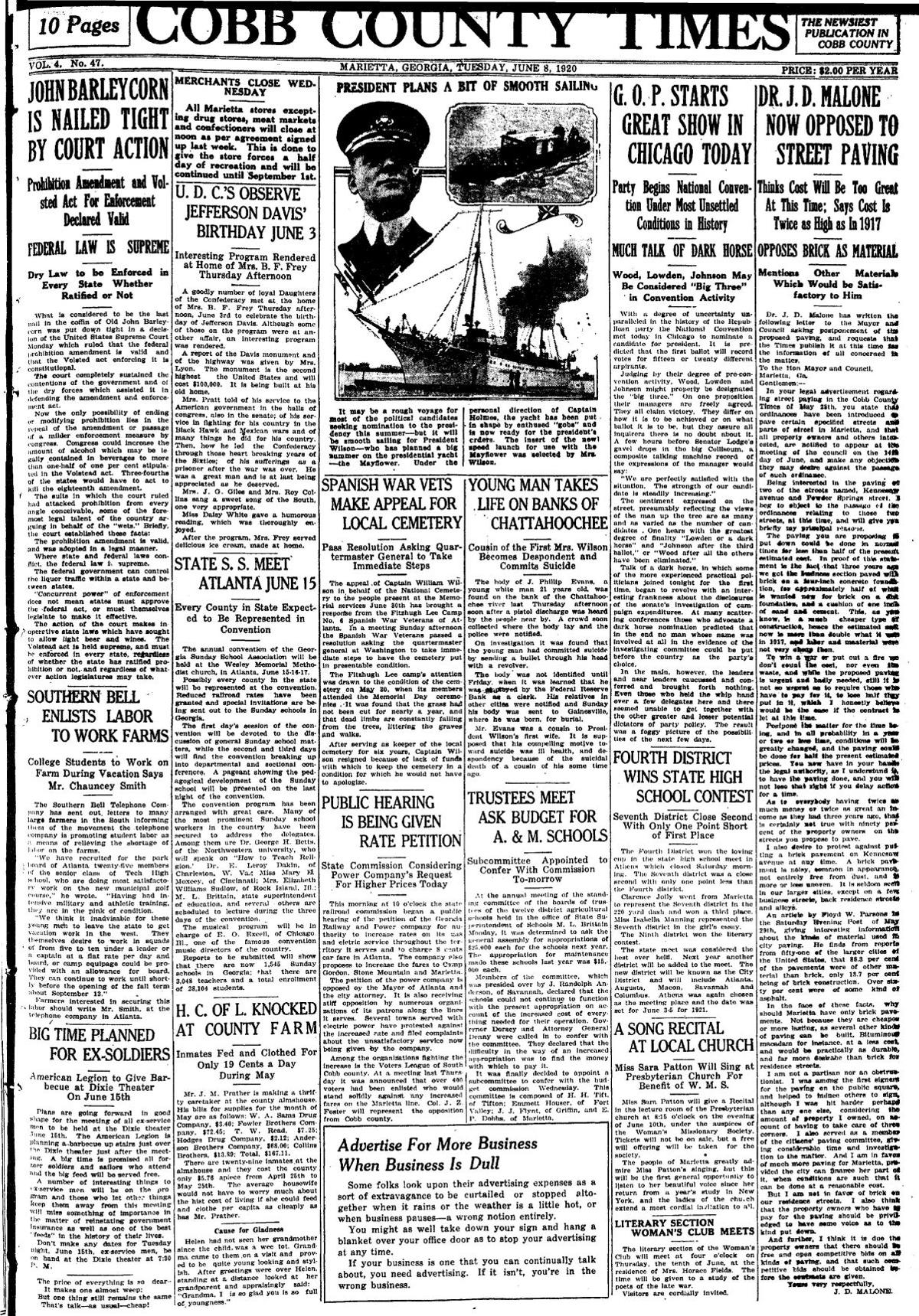 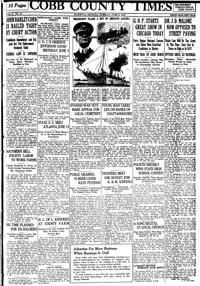 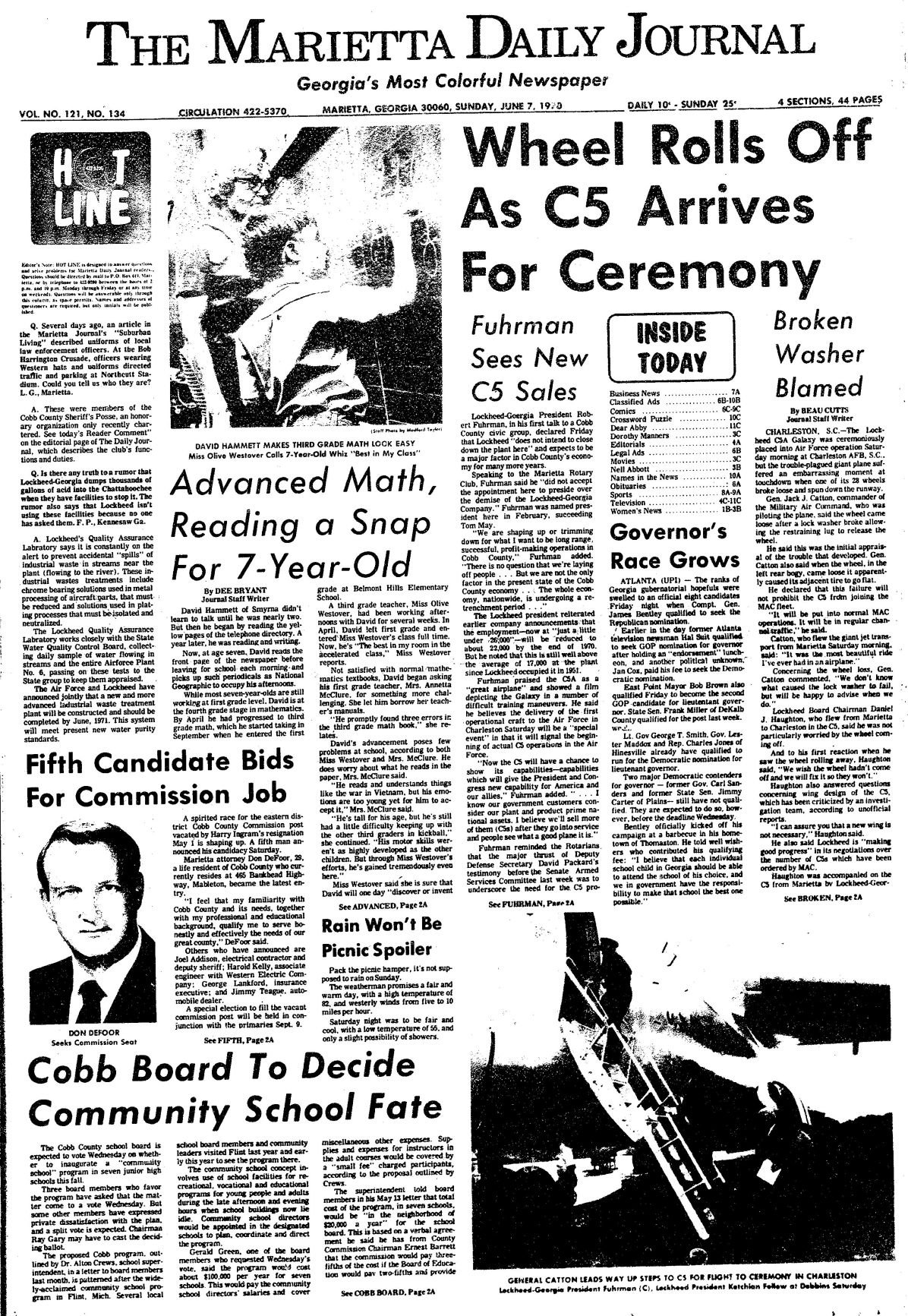 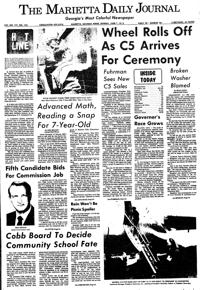 The Tuesday, June 8, 1920, edition of The Cobb County Times reported that the Fitzhugh Lee Camp No. 6 Spanish War Veterans of Atlanta passed a resolution the Sunday before asking the quartermaster general in Washington to have the Marietta National Cemetery made presentable. During Memorial Day ceremonies, the veterans found the grass had not been cut for nearly a year and that dead limbs had been falling from trees to litter the graves and walkways.

In the “News From Our Correspondents” column, the Kennesaw correspondent wrote that Lawton Bozeman, the “Babe Ruth” of the Kennesaw baseball team, was hitting home runs hard and that “if the New York Yankee Ruth don’t get a hustle on he is going to have a strong contender for the home run honors this year.”

A report out of Atlanta announced the discovery of a gold watch belonging to Mrs. Lou Ridley in the center of a handmade cotton mattress from the time of Sherman’s infamous March to the Sea. The mattress, which had come into the possession of her nephew, W.H. Sartin, had been in use by the family for 30 years. Sartin’s wife was reported as making up the bed when her hand struck a hard object in the mattress. Cutting a small hole in it, she found a small handbag that contained the timepiece.

Another story out of Atlanta reported that Lt. Col. M.H. Screws, who formerly commanded a battalion of the 319th Field Artillery of the 82nd Division during World War I, had his jaw fractured in two places during a saw mill accident the Friday before.

The Friday, June 11, 1920, edition of The Cobb County Times reported that work had begun on a new city well in south Marietta on the old Black Lumber Company site. The well was being drilled to take the place of the No. 8 well near the McNeel Marble Company, which was going to be held in reserve for emergencies.

The Friday, June 11, 1920, edition of The Marietta Journal reported that Judge N.A. Morris and Harold Hawkins were employed as leading counsel in the defense of Verner Vincent, a traveling salesman from Cartersville, in the murder of Smith Treadwell, the owner of a garage in Chatsworth. The week before, Vincent was said to have shot and killed Treadwell.

A large front page graphic, titled “Do You Own Any of This Land,” was published from the National Drainage Journal of Marietta. It showed the number of acres in each county in Georgia needing drainage and was compiled from official figures of the Geological Survey of Georgia and the Agricultural Department of the U.S. The graphic showed that three million acres were permanent swamp land, 3.5 million acres were wet grazing land, 500,000 acres were periodically swamp land and 500,000 acres were tidal marsh land.

In the “News From Our Correspondents” column were the following items:

♦In the Log Cabin section, about 30 people were reported as going to “the Fulton County tower” the Sunday before to sing for the prisoners.

In the “Current Events” column, Atlanta City Detective Claude J. Jameson, who had relatives in Cobb County, was reported as being killed the week before while raiding a black gambling resort. In the battle between officers and the gamblers, three black men were also killed.

♦ Pfc. Robert Powell of Marietta was wounded in action on May 23 on Okinawa during WWII and had to have his right arm removed.

♦ Laurie Ford, former principal of Keith Grammar School, was the first teacher in Marietta to retire under the Georgia Teacher’s Retirement Plan. Ford had been teaching in the Marietta School System for 47 years, having come to the city in 1896.

In the Sunday, June 7, 1970, paper it was reported that a Lockheed C5A Galaxy was ceremoniously placed into Air Force operation the day before at Charleston Air Force Base in South Carolina, but “the trouble-plagued giant plane suffered an embarrassing moment at touchdown when one of its 28 wheels broke loose and spun down the runway.” Gen. Jack J. Catton, commander of the Military Air Command who was piloting the plane, said the wheel came loose after “a lock washer” broke allowing the restraining lug to release the wheel.

The Tuesday, June 9, 1970, paper reported that Spec. 4 Ronald E. Puckett of Smyrna was killed and Spec. 4 Francis J. Cosner Jr. of Marietta was seriously injured the day before at Fort Bragg, North Carolina, when 20 pounds of TNT exploded prematurely at their feet. They were among seven Green Beret soldiers killed and five wounded in the explosion during a class demonstration.