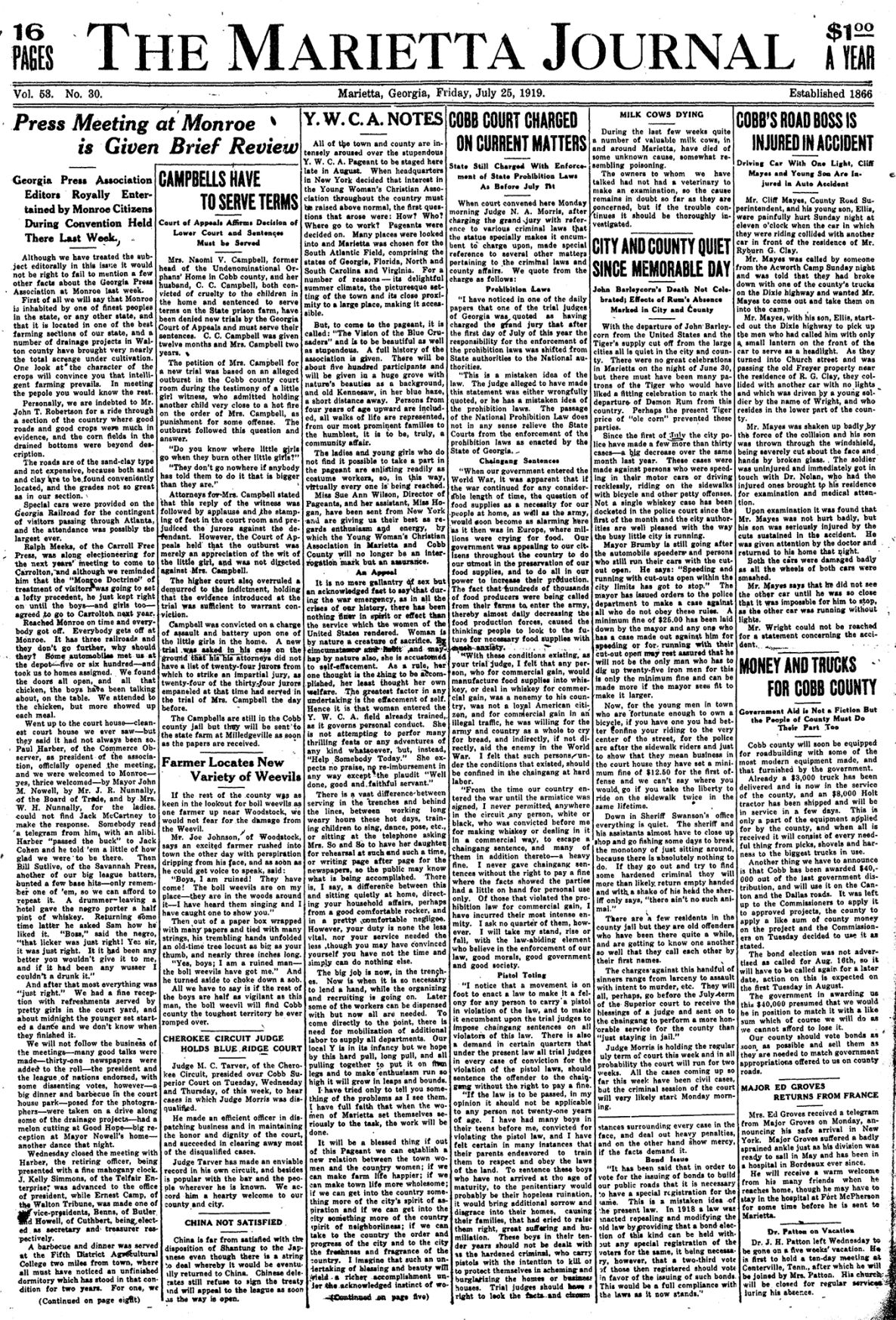 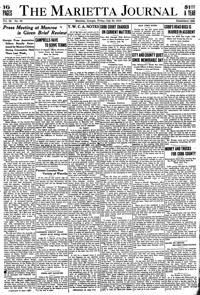 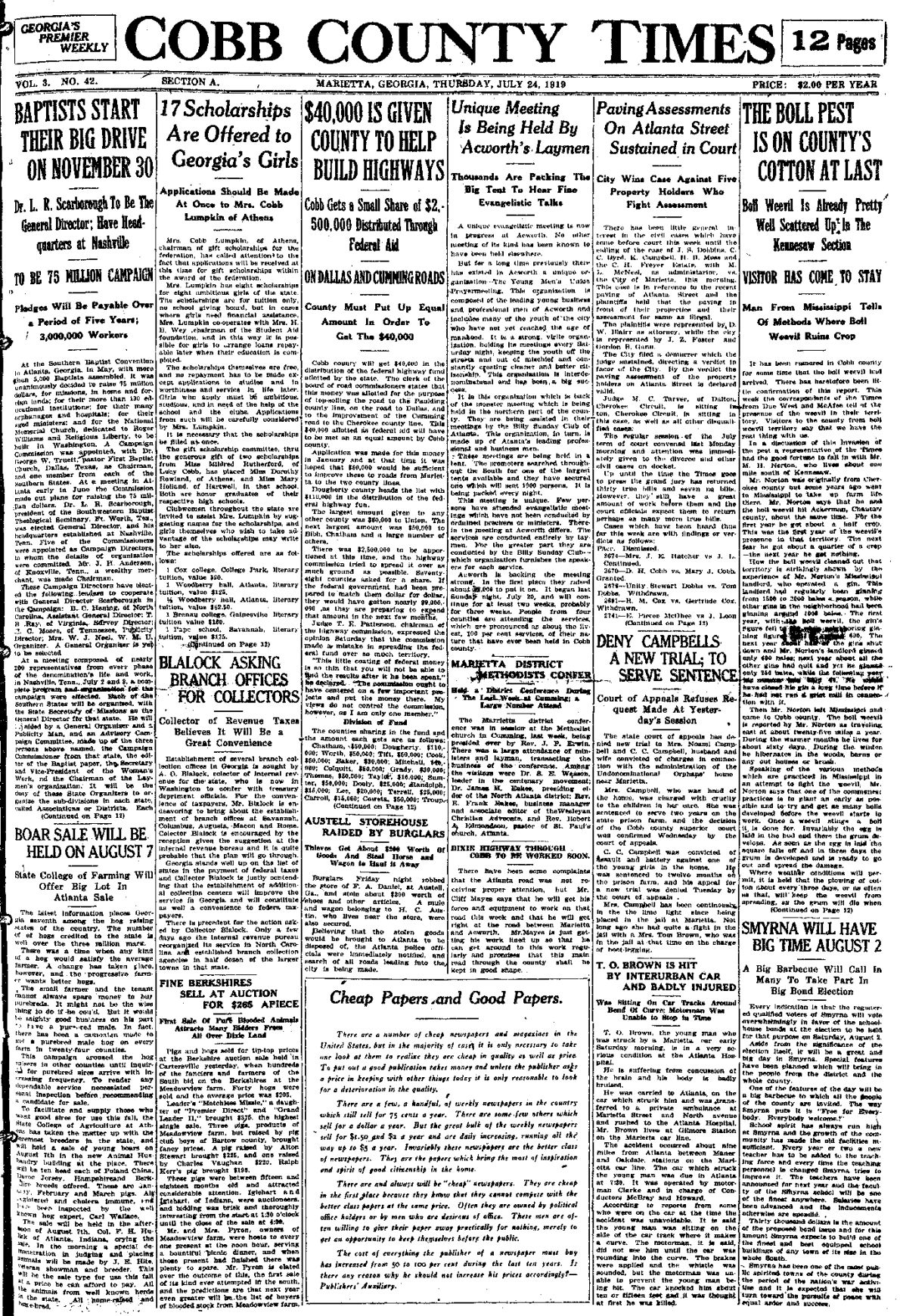 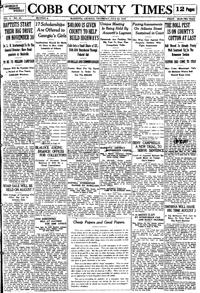 From the Thursday, July 24, 1919, edition of The Cobb County Times. Pictured is an advertisement for The Dixie Bakery on Cherokee Street in Marietta. 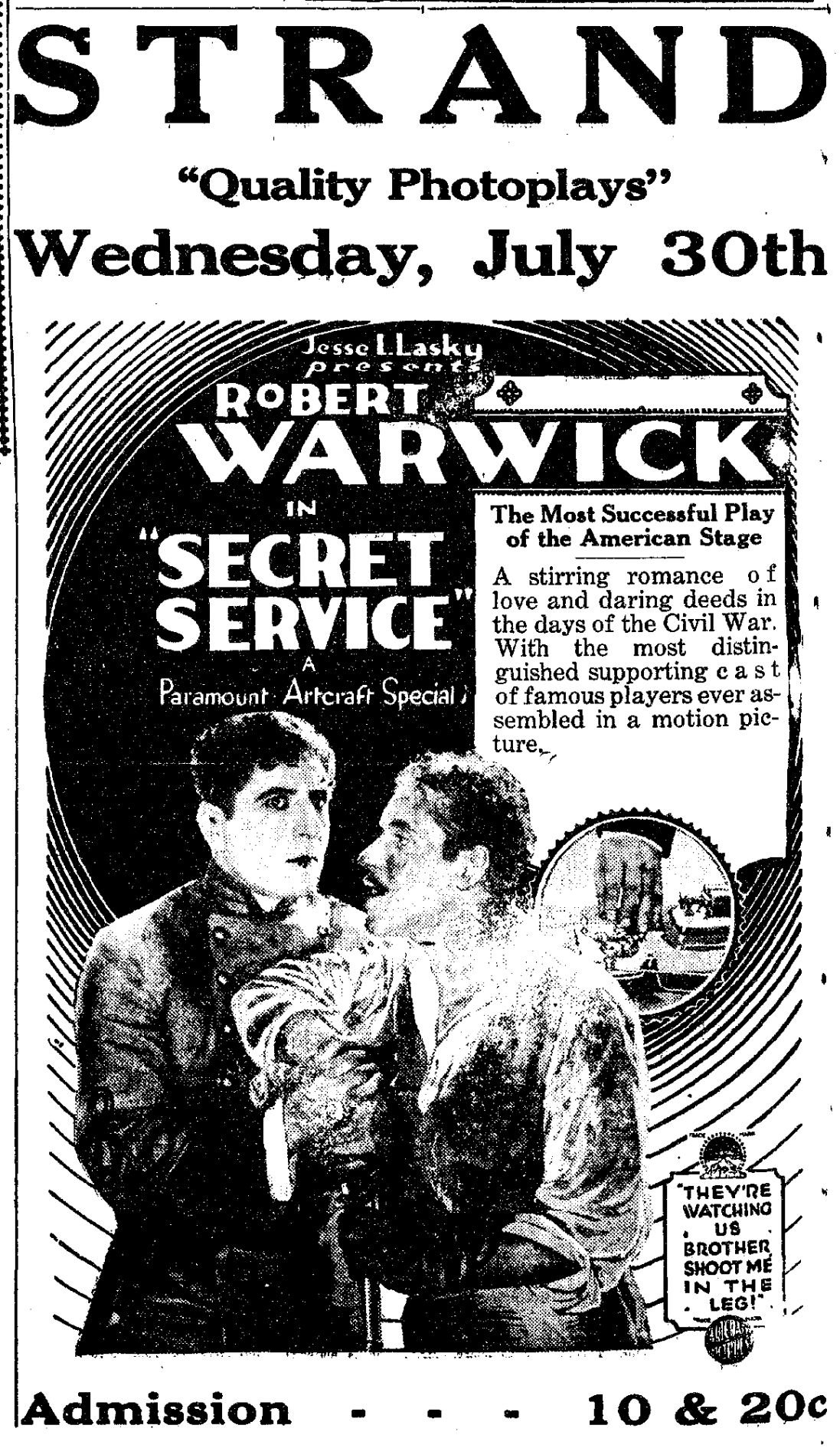 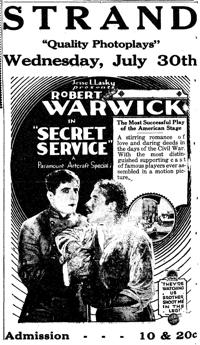 From the Thursday, July 24, 1919, edition of The Cobb County Times. Pictured is a quarter-page advertisement for Robert Warwick in “Secret Service” at The Strand Theatre in Marietta. The film was billed as having “the most distinguished supporting cast of famous players ever assembled in a motion picture.”

From the Thursday, July 24, 1919, edition of The Cobb County Times. Pictured is an advertisement for The Dixie Bakery on Cherokee Street in Marietta.

From the Thursday, July 24, 1919, edition of The Cobb County Times. Pictured is a quarter-page advertisement for Robert Warwick in “Secret Service” at The Strand Theatre in Marietta. The film was billed as having “the most distinguished supporting cast of famous players ever assembled in a motion picture.”

The Thursday, July 24, 1919, edition of The Cobb County Times reported that burglars the Friday before robbed the store of F.A. Daniel in Austell. Shoes and other articles, worth $200, were stolen along with the mule and wagon belonging to H.C. Austin, who lived near the store.

An intense afternoon lightning storm was reported as being responsible for several incidents in Milton County the Sunday before.

Joe Wood's barn "at the old McCollum place near Alpharetta" was struck and set on fire. The barn burned down with all of Wood's feedstuffs inside.

A mile and a half to the northwest of Alpharetta, John Maynard's veranda was badly damaged after being struck and one of the cows belonging to the Chester family was struck and killed. There were also several telephone poles in the town that were shattered, along with a half dozen trees.

The Friday, July 25, 1919, edition of The Marietta Journal reported the Campbells were denied new trials by the Georgia Court of Appeals and ordered to serve their sentences.

Naomi V. Campbell, the former head of the Undenominational Orphans' Home in Cobb County, and her husband, C.C. Campbell, were both convicted of cruelty to children at the home and sentenced to serve terms at the state prison farm in Milledgeville. Naomi was sentenced to two years and her husband was given 12 months.

The petition for a new trial for Naomi was based on an alleged outburst during the testimony of a little girl, who admitted to holding another child very close to a hot fire under Naomi's orders as punishment.

Joe Johnson of Woodstock was reported as rushing into town earlier in the week "with perspiration dripping from his face" and announcing that he was ruined because of boll weevils at his farm. Johnson, with trembling hands, produced out of "a paper box wrapped with papers and tied with many strings" one of the weevils. The misidentified insect was actually "an old-time tree locust as big as your thumb, and nearly three inches long."

Cliff Mayes, the Cobb County Road Superintendent, and his young son, Ellis, were hurt in a collision with another car at night in front of the residence of Ryburn G. Clay the Sunday before.

Mayes was called to come pick up some people who were stranded with a broken down county truck on Dixie Highway heading to the Acworth road camp. Mayes and his son went out to pick up the men "with only a small lantern on the front of the car to serve as a headlight." They were struck by another car with no lights being driven by a young soldier named Wright, who lived in south Cobb.

Mayes was shaken up badly, but Ellis was thrown through the windshield and "severely cut about the face and hands by broken glass." Wright was uninjured.

Both cars were badly damaged and all of the wheels on each vehicle were smashed.

Grady Gaten and Oscar Elkins, both of Dawson County, were reported as being seriously injured by a premature explosion while dynamite fishing in a river near Holcomb. The stick of dynamite went off in Gaten's hands, "blowing both off," and blinding Elkins.

A story that the Journal editors picked up from the Atlanta Constitution reported that visitors at a Lithonia granite quarry had the scare of their lives.

A few hundred yards out into the quarry, the visitors suddenly felt the solid granite begin heaving and swaying as a "splitting, tearing noise" and "horrible, grating noise" was heard. Fearing an earthquake, the visitors ran to the main office. They were met at the door by the operator, who explained that "the 'raise' charge" he had fired several days ago was "proving a great success."

"A 'raise' hole" was a shaft sunk in granite and loaded with a large amount of explosives that were intended to lift or split large areas of granite so it could be worked. Blasts took several days to take effect.

A strike by 2,500 military prisoners in "the disciplinary barracks" at the federal prison in Leavenworth, Kansas, was reported as happening that day. Col. Frederick Rice, commander of the barracks, was said to have received 12 men requesting the prisoners be given shorter hours and more food to eat.

In the "Around The Square" column were the following items:

♦ The W.A. Florence Dry Goods Company announced that they had leased from W.L. Richardson, the store behind Mr. Florence's store. The new space was being remodeled so Florence could move new departments into the addition.

♦ "One of the most unique window displays around the Square is that of Pyrex Transparent Ovenware in the window of F.E.A. Schilling. This ovenware has the appearance of glass, but has excellent heat resistance qualities."

In the Friday, July 25, 1969, Marietta Daily Journal it was reported that Cobb Police had launched a manhunt for three armed bandits that held up the Big Apple grocery store at the intersection of Austell and Floyd roads.

The actual amount of money taken was undetermined, but store officials figured that it was at least $2,000. The getaway car was a 1968 light green Dodge Coronet 440.

Editor’s Note: This is the second part of a two-part series on the Apollo 11 mission.

MDJ Time Capsule: The Week of July 18: A fatal lightning strike and the Apollo 11 launch

This week’s Time Capsule looks at a fatal lightning strike and the Apollo 11 launch.