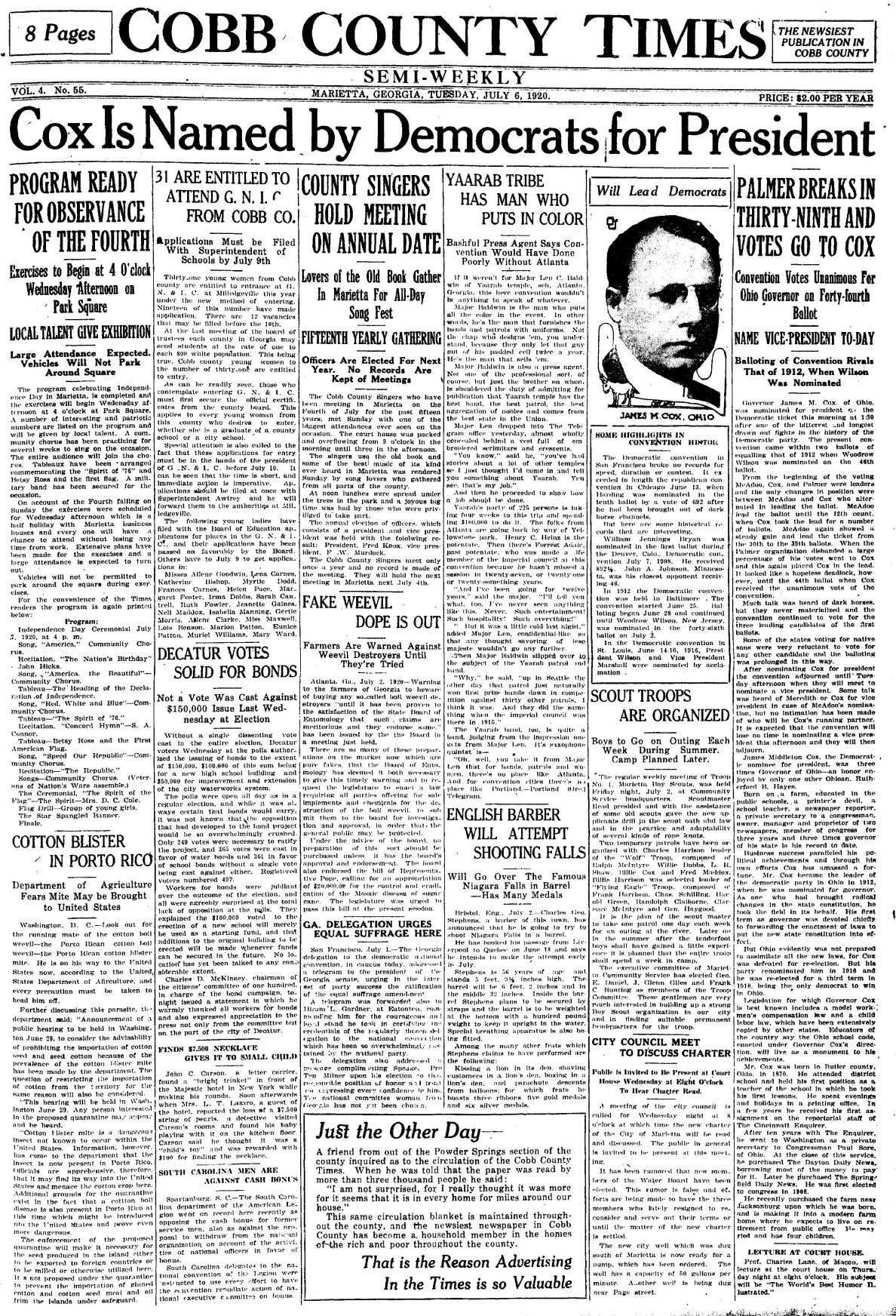 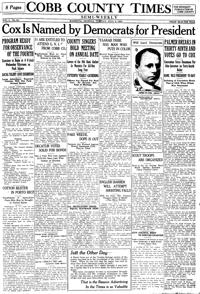 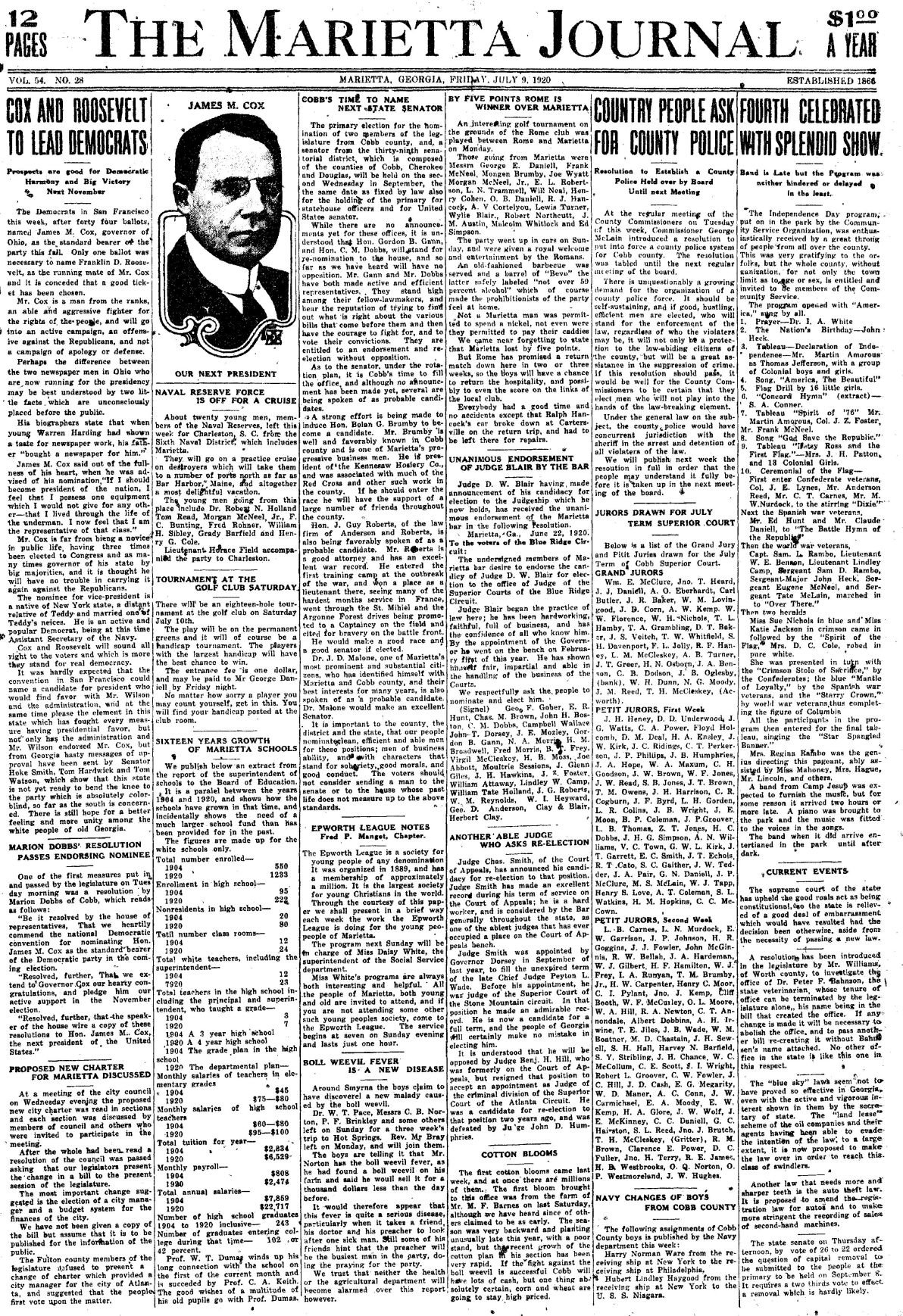 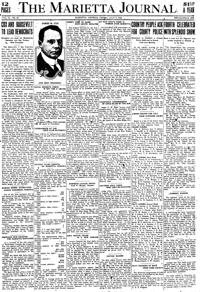 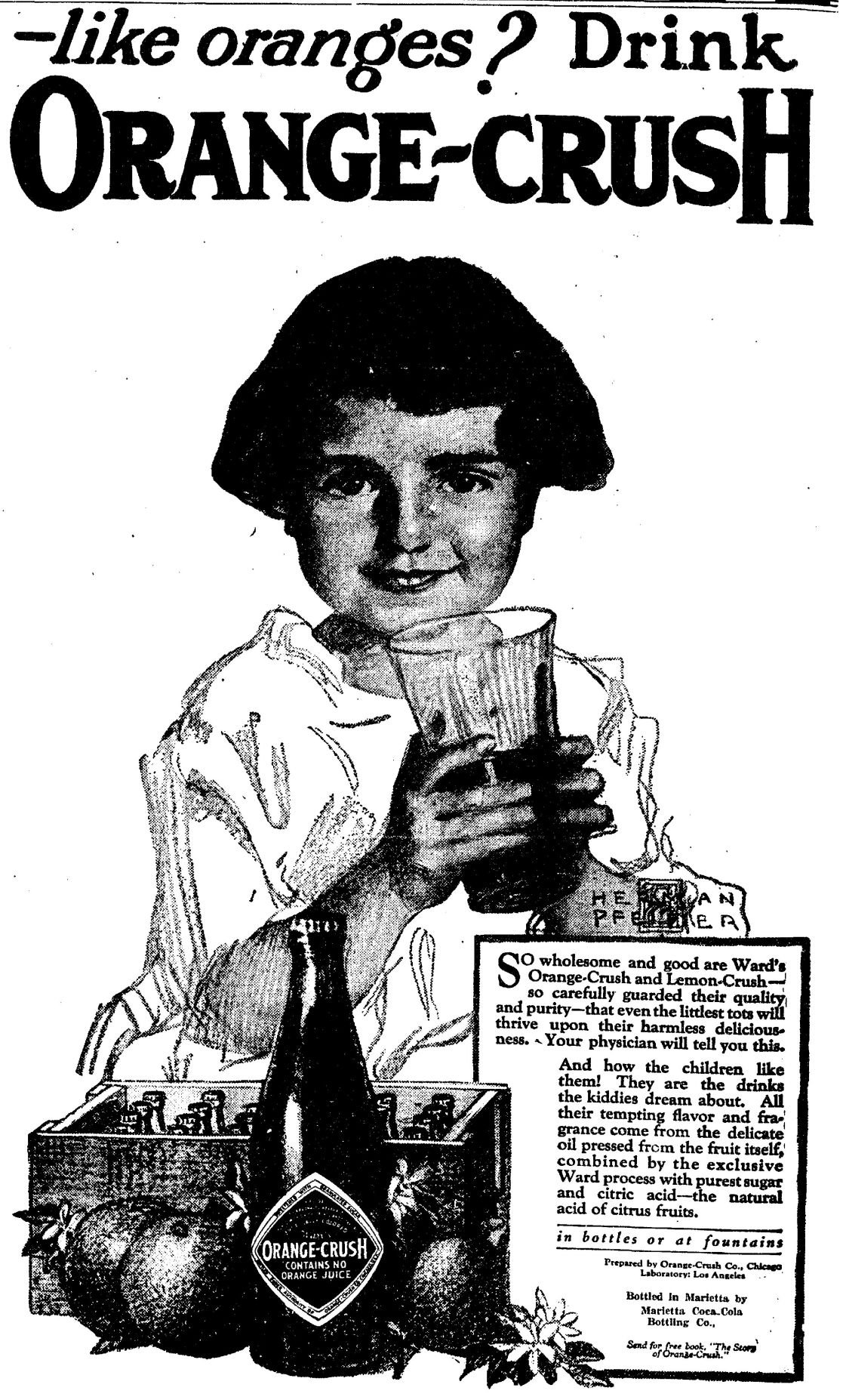 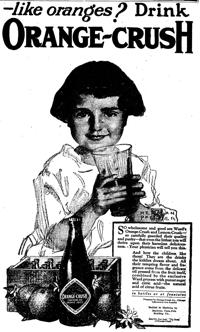 Pictured is a quarter page advertisement for Orange-Crush soda, which was bottled in Marietta by the Marietta Coca-Cola Bottling Co., that ran on Page 2 of the Tuesday, July 6, 1920, edition of The Cobb County Times. 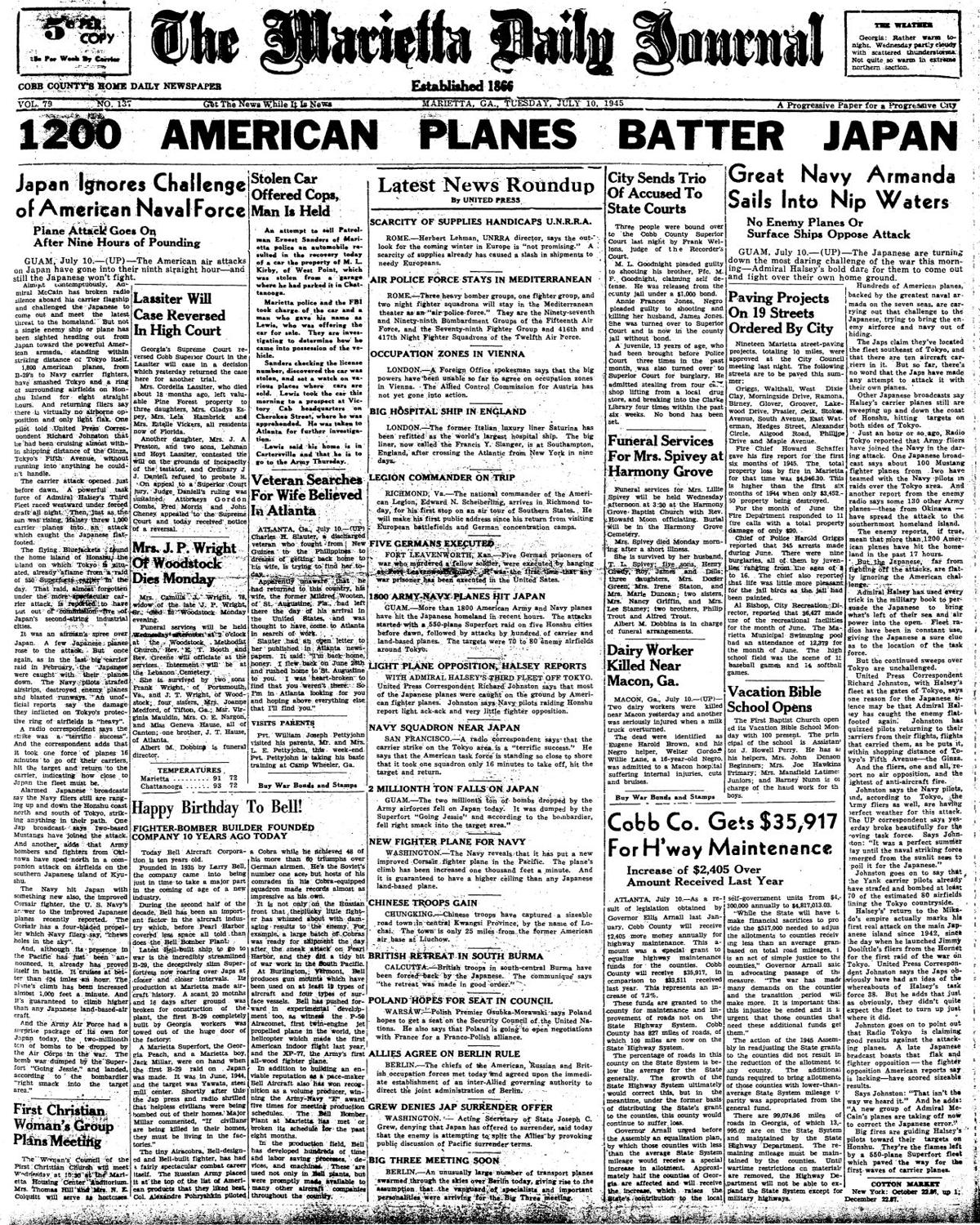 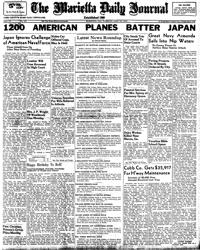 The front page of the Marietta Daily Journal from Tuesday, July 10, 1945.

Pictured is a quarter page advertisement for Orange-Crush soda, which was bottled in Marietta by the Marietta Coca-Cola Bottling Co., that ran on Page 2 of the Tuesday, July 6, 1920, edition of The Cobb County Times.

The front page of the Marietta Daily Journal from Tuesday, July 10, 1945.

The Tuesday, July 6, 1920, edition of The Cobb County Times reported that the State Board of Entomology issued a warning to Georgia farmers to beware of buying any “boll weevil destroyers” until they were proven and endorsed by the Board. There were so many fake products on the market at the time that the Board had deemed it necessary to issue the warning and request the Legislature to enact a law requiring all parties offering “implements and chemicals” to get rid of the boll weevil be submitted to the Board for investigation.

On the Editorial Page, the editors wrote:

“The other night a couple of young fellows were calling on a girl on Church Street. After a while they decided that a certain street light was too bright for them and marched out and, after throwing rocks for several minutes, smashed that light and then went back to the girl’s porch. Since that time there has been darkness on that corner — and many accidents have been narrowly avoided.”

The Friday, July 9, 1920, edition of The Cobb County Times reported that Dr. R.W. Todd, the new health officer for Cobb County, had found cases of typhoid fever across the county and was planning to visit the towns on a regular schedule in order to inoculate residents against the disease. The vaccine, according to Dr. Todd, made people immune for 3-5 years.

Sheriff W.E. Swanson was reported as having located 12 gallons of illegal whiskey the Tuesday before in a barn near Kennesaw Mountain. The property owner was arrested.

♦Lost Mountain section — It was reported that Homer Griffin was “bruised considerably” after he was literally plowed over the Tuesday before. While hitching his horse to the plow, Griffin was knocked down by the animal and the plow was pulled over him.

The Friday, July 9, 1920, edition of The Marietta Journal reported that at the regular meeting of the Cobb County Commissioners the Tuesday before, Commissioner George McLain introduced legislation to put together a county police system.

♦Clyde Seaborn Belk, 33, an REA lineman, was killed the day before while working on a transformer on high tension wires near Bishop’s Lake, 10 miles east of Marietta.

♦First Lt. Tillman J. Farr Jr. of Marietta was reported as being killed in action on Okinawa on May 31, 1945 by the War Department. He had been overseas 10 months with the 96th Division participating in the invasion of the Philippines and later in the Battle of Okinawa. He served with the Engineer Corps and had twice won the Presidential Unit Citation and had two battle stars.

The Tuesday, July 10, 1945, paper announced that the Bell Aircraft Corporation turned 10 years old. It was founded in 1935 by Larry Bell. The company was a builder of several types of fighter aircraft for WWII. Bell’s factory in Marietta later became the property of the Lockheed Corporation, which has since used it for producing C-130 Hercules, C-141 Starlifter and C-5 Galaxy transport planes.

The monthly report of the Georgia Alcohol Tax and Control Unit reported in the Wednesday, July 11, 1945, paper that 217 raids on illegal liquor stills were made in June 1945 in 44 dry counties and 18 wet counties by state enforcement officials. There were 21 new retail liquor store licenses issued by the State Revenue Department, bringing the total number of liquor retailers in the state to 972. Six retailers were put out of business when the cities of Austell and Decatur voted to go dry.

In the Wednesday, July 8, 1970, paper it was reported that the Cobb County archaeological project at Pebblebrook High School, where humans had lived for 6,000 years, received a grant of $2,500 from the Cobb County Board of Education. The Pebblebrook dig site had yielded artifacts from the Woodstock Era, about 800 A.D.

“A quartet of smooth-working, fast-talking customers” were reported in the Friday, July 10, 1970, paper as having pulled off one of the most costly shoplifting jobs in Cobb County history. The four thieves slipped out of Zales Jewelers in the Hawthorne Plaza Shopping Center in Mableton with a handful of diamond rings valued at almost $4,000.