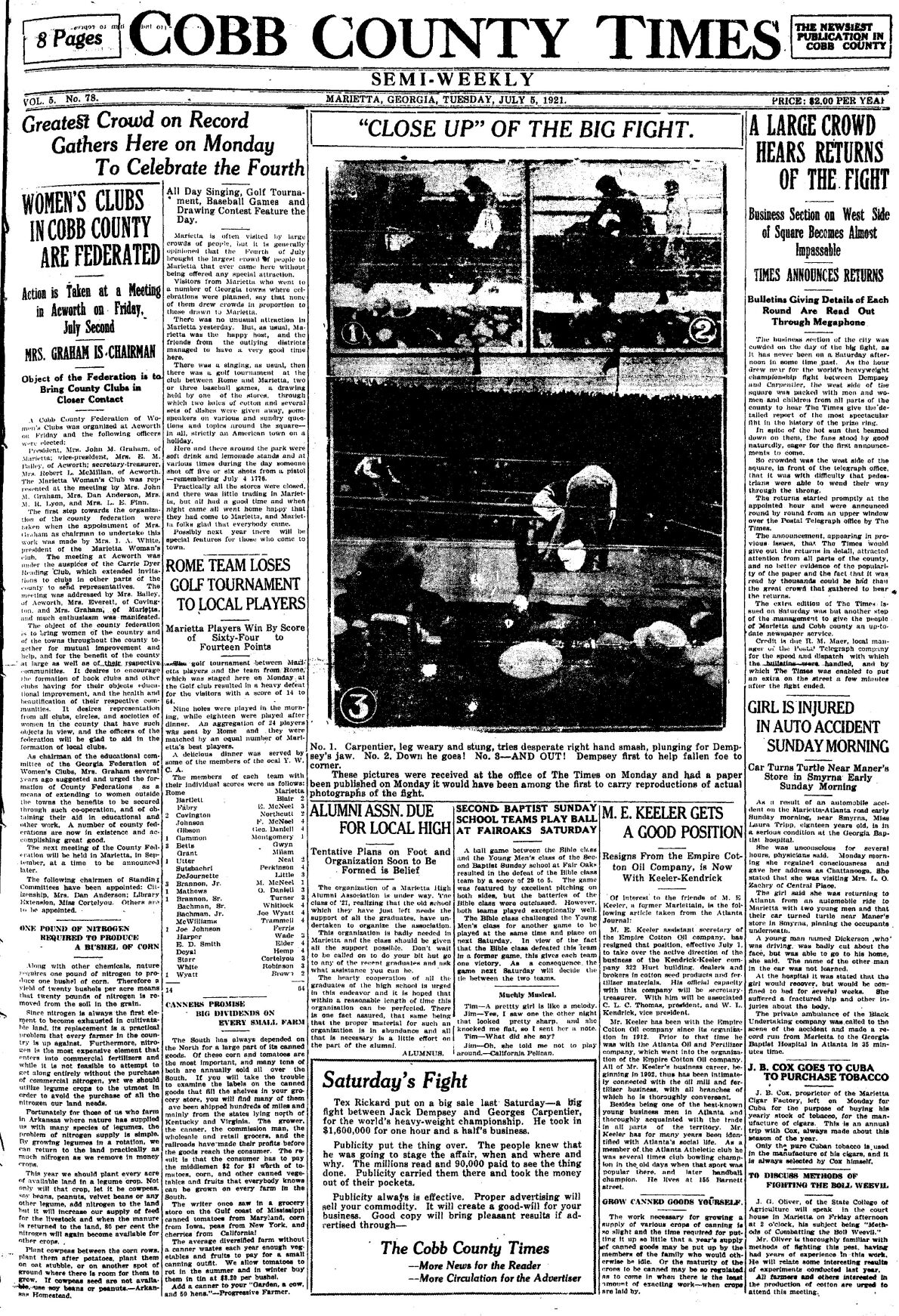 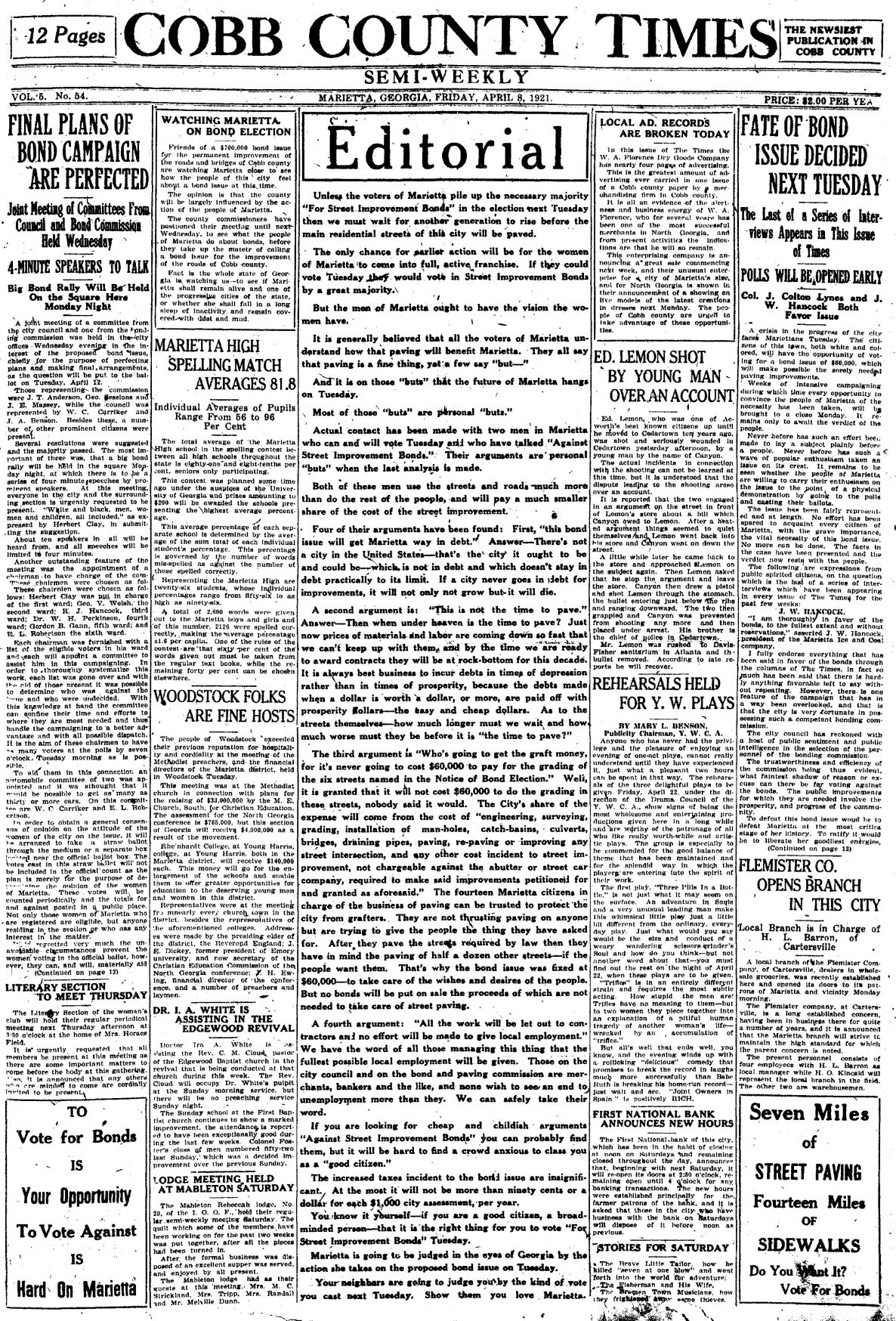 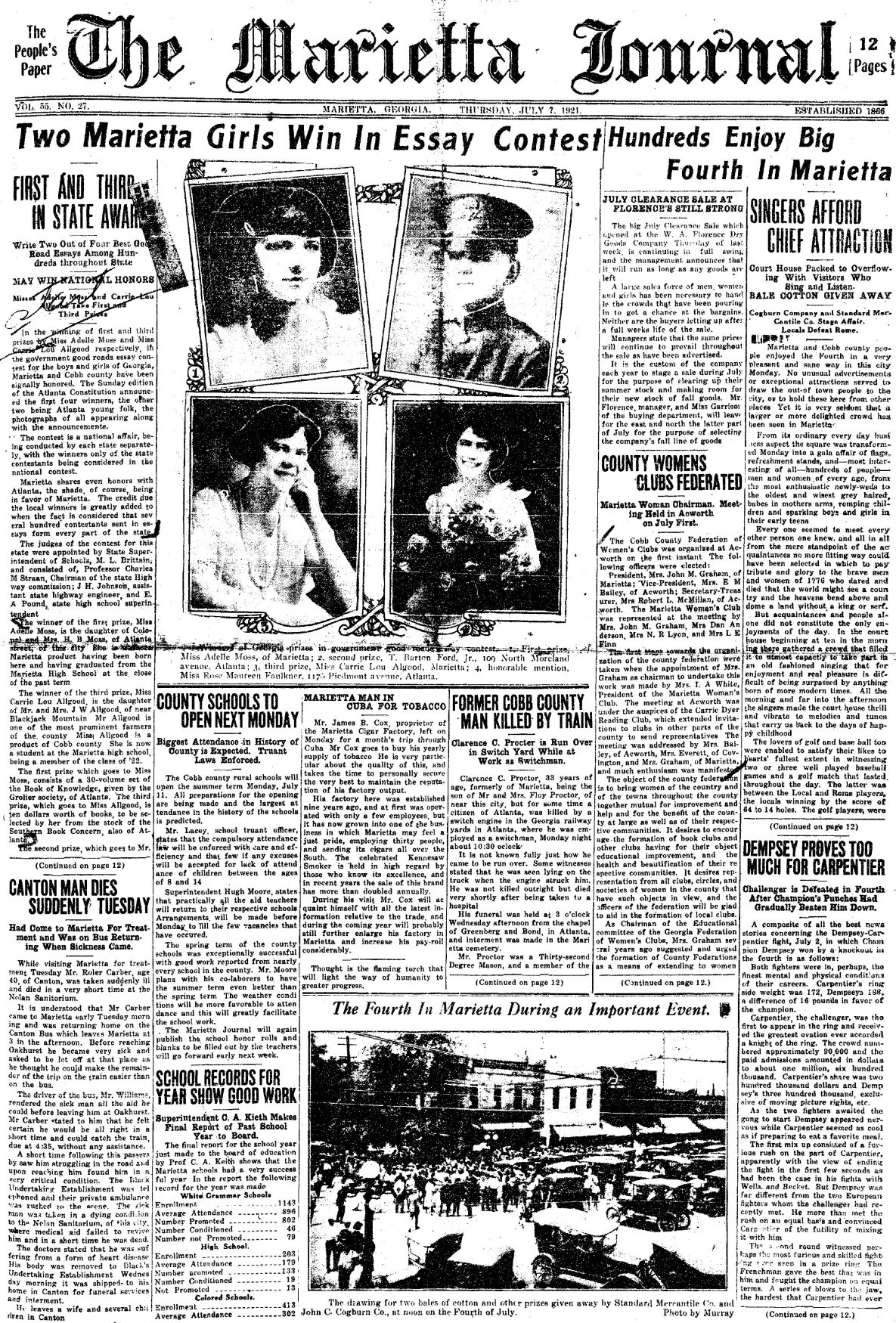 The Tuesday, July 5, 1921, edition of The Cobb County Times reported on a car accident on the Marietta-Atlanta Road near Smyrna that happened early the Sunday morning before. Laura Tripp, 18, was left with a fractured hip and other injuries about her body after being unconscious for several hours at the Georgia Baptist Hospital in Atlanta.

Tripp was returning to Atlanta from a ride to Marietta with two young men when their car “turned turtle” near Maner’s Store and pinned the occupants underneath. The driver, a young man named Dickerson, was badly cut about the face but able to go home. The name and condition of the other man in the car was not learned.

The paper also reported that the private ambulance of the Black Undertaking Company, which was called to the scene, made a record run from Marietta to the Georgia Baptist Hospital in 35 minutes.

J.B. Cox, proprietor of the Marietta Cigar Factory, was reported as leaving the Monday before for Cuba to purchase his yearly stock of tobacco. Cox would only use pure Cuban tobacco in the manufacture of his cigars and always selected it himself.

The Friday, July 8, 1921, edition of The Cobb County Times reported that Ed Lemon, one of Acworth’s well known citizens until he moved to Cedartown 10 years earlier, was shot and seriously wounded in that city the day before by a young man named Canyon.

The two men had an argument in the street in front of Lemon’s store about a bill that Canyon owed. After the heated exchange, Lemon went into his store and Canyon went down the street.

A little while later, Canyon returned to argue some more and Lemon asked him to leave the store. Canyon then drew a pistol and shot Lemon in the stomach, with the bullet entering just below the ribs and ranging downward. The two men then grappled over the gun. Canyon was prevented from firing any more shots and was placed under arrest. His brother was the chief of police in Cedartown.

Lemon was rushed to the Davis-Fisher Sanitarium in Atlanta and the bullet was removed. He was expected to recover.

In the “News From Our Correspondents” column, the Davis Academy section reported that the community was grieving after learning of the death of Emma Peek the Wednesday before. She was shot by her husband, Steward Peek, and died almost instantly. She left behind five children, the youngest only 14 months old.

The Thursday, July 7, 1921 edition of The Marietta Journal reported that Clarence C. Proctor, 33, formerly of Marietta, was killed the Monday before by a switch engine in the Georgia Railway yards in Atlanta where he was employed as a switchman.

Some witnesses said that he was lying on the track when the engine struck him. Proctor was not killed outright, but died shortly after being taken to the hospital.

Roler Carber, 40, of Canton was reported as having died suddenly the Tuesday before after visiting Marietta for treatment at the Nolan Sanitarium. Carber was returning home on the Canton Bus from Marietta and became very sick before reaching Oakhurst. He asked to be let off and thought he could make the remainder of the trip on the train easier than the bus. A short while later, passersby saw him struggling in the road and upon reaching him discovered he was in critical condition. The Black Undertaking Company’s private ambulance was summoned and he was rushed back to Nolan’s where he failed to revive and died a short time later.

The Sunday, July 7, 1946, edition of The Marietta Daily Journal reported that approximately 50 Mariettans and Atlantans were shaken up and a score of people injured when two connected southbound streetcars jumped the track at Jonesville the Friday before at 5:15 p.m.

T.R. Langley of Atlanta was the driver of the lead trolley. He said that the derailed car jumped the track where “the double lane turns to make the (Bell) Bomber plant loop.” The crash happened so fast that Langley wasn’t sure how it occurred.

The derailed car was said to have plowed for several yards through the dirt and gravel before smashing into a heavy-duty power pole, breaking it at the bottom. The front of the car was smashed inward and shattered glass was thrown on Langley. Passengers were jolted from their seats and two elderly women sustained painful injuries.

The rear trolley was also jerked off the tracks and crashed into the back of the first. It took several hours before the wreckage could be cleared away by the power company maintenance crews.