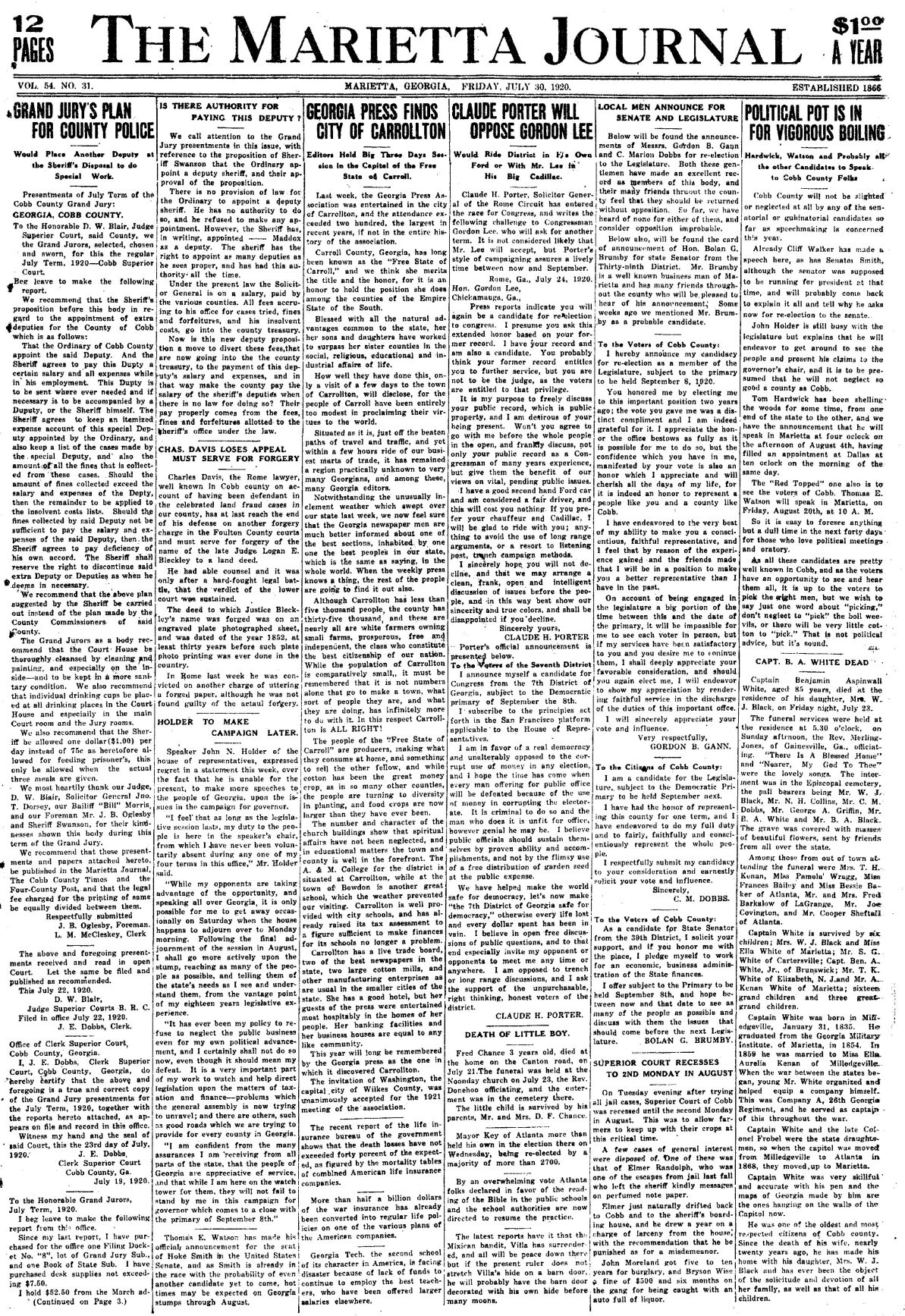 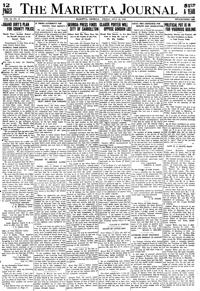 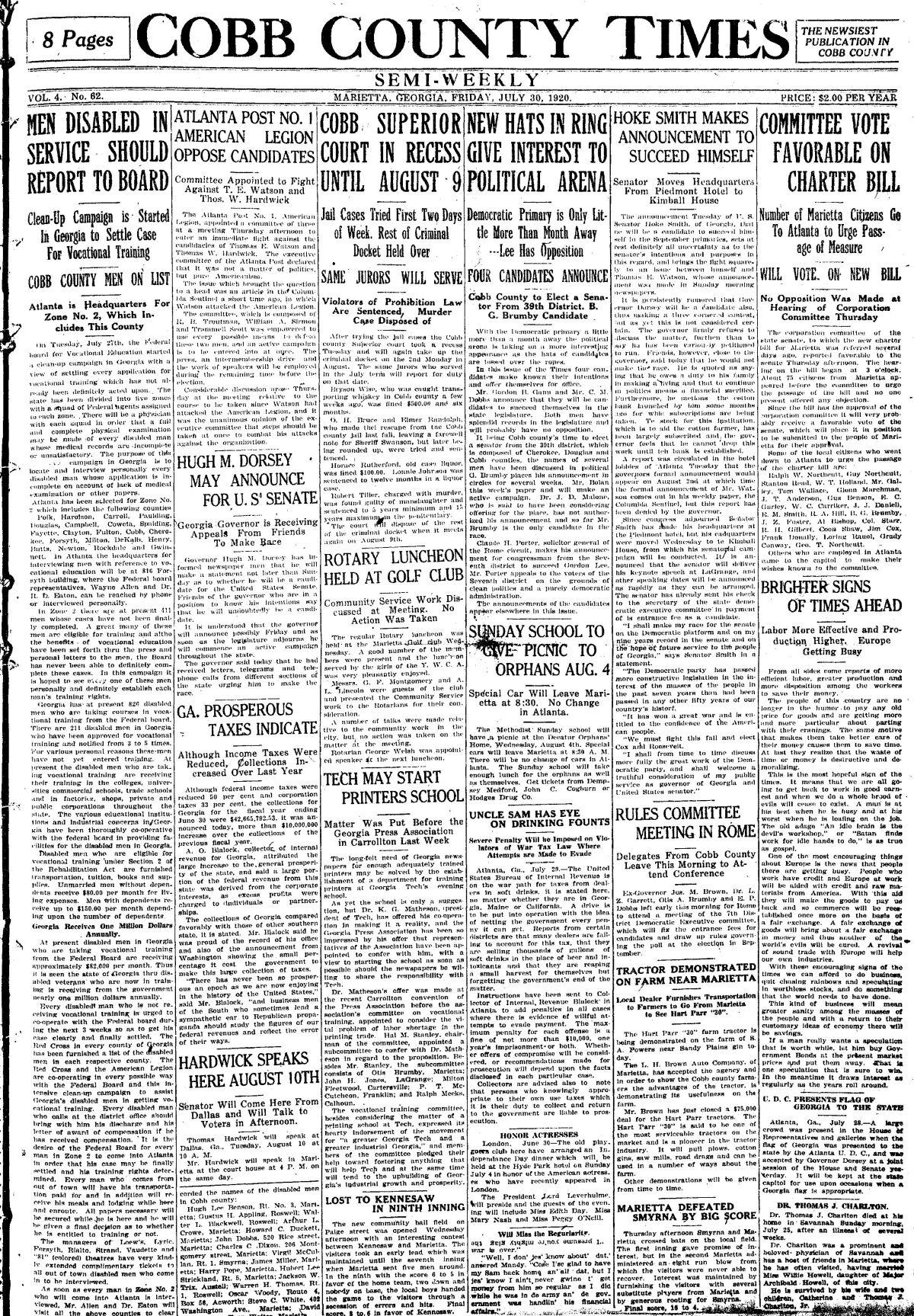 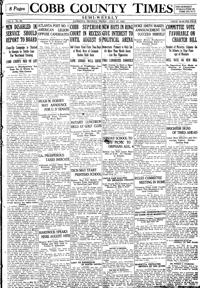 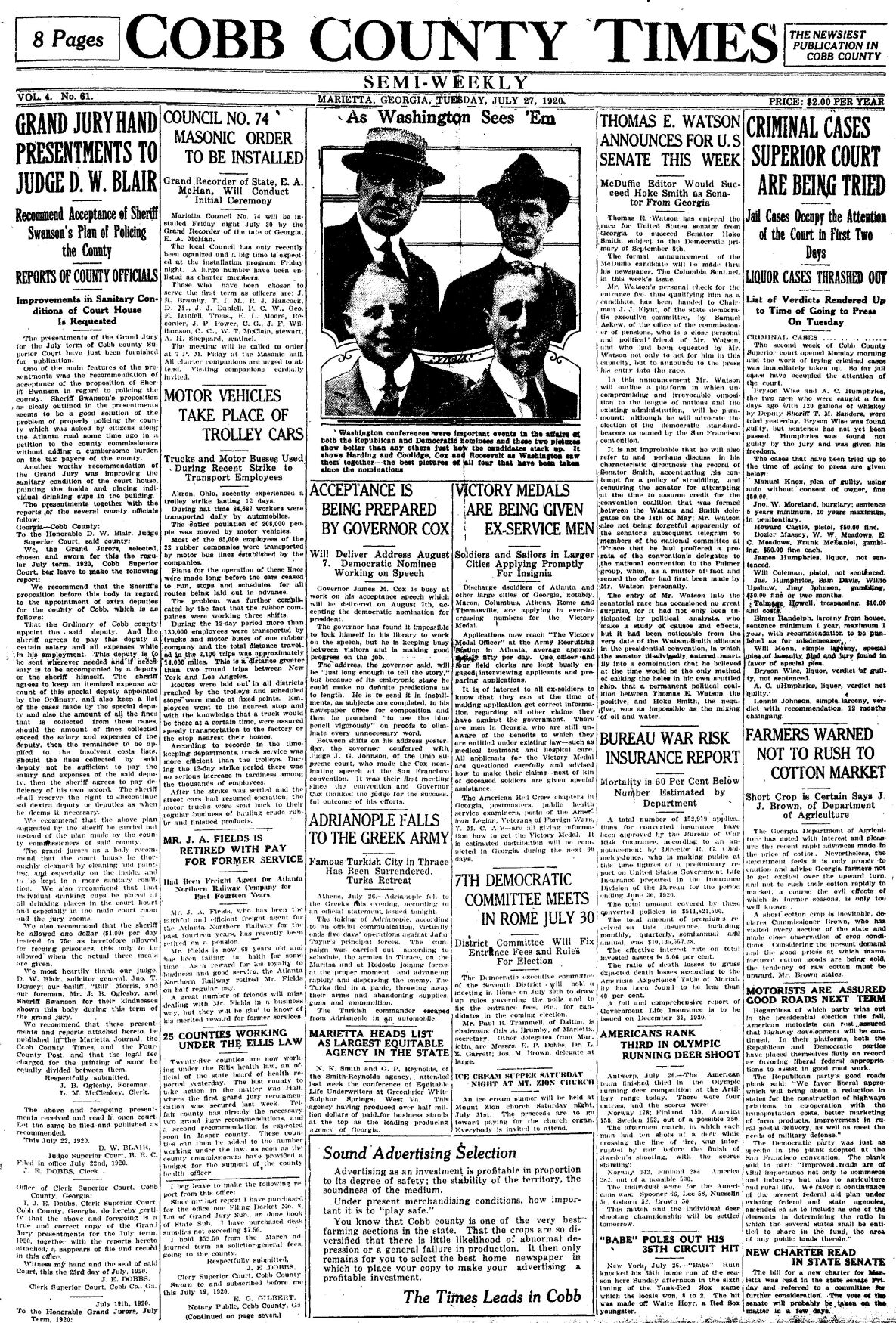 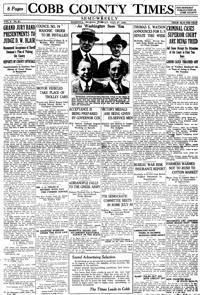 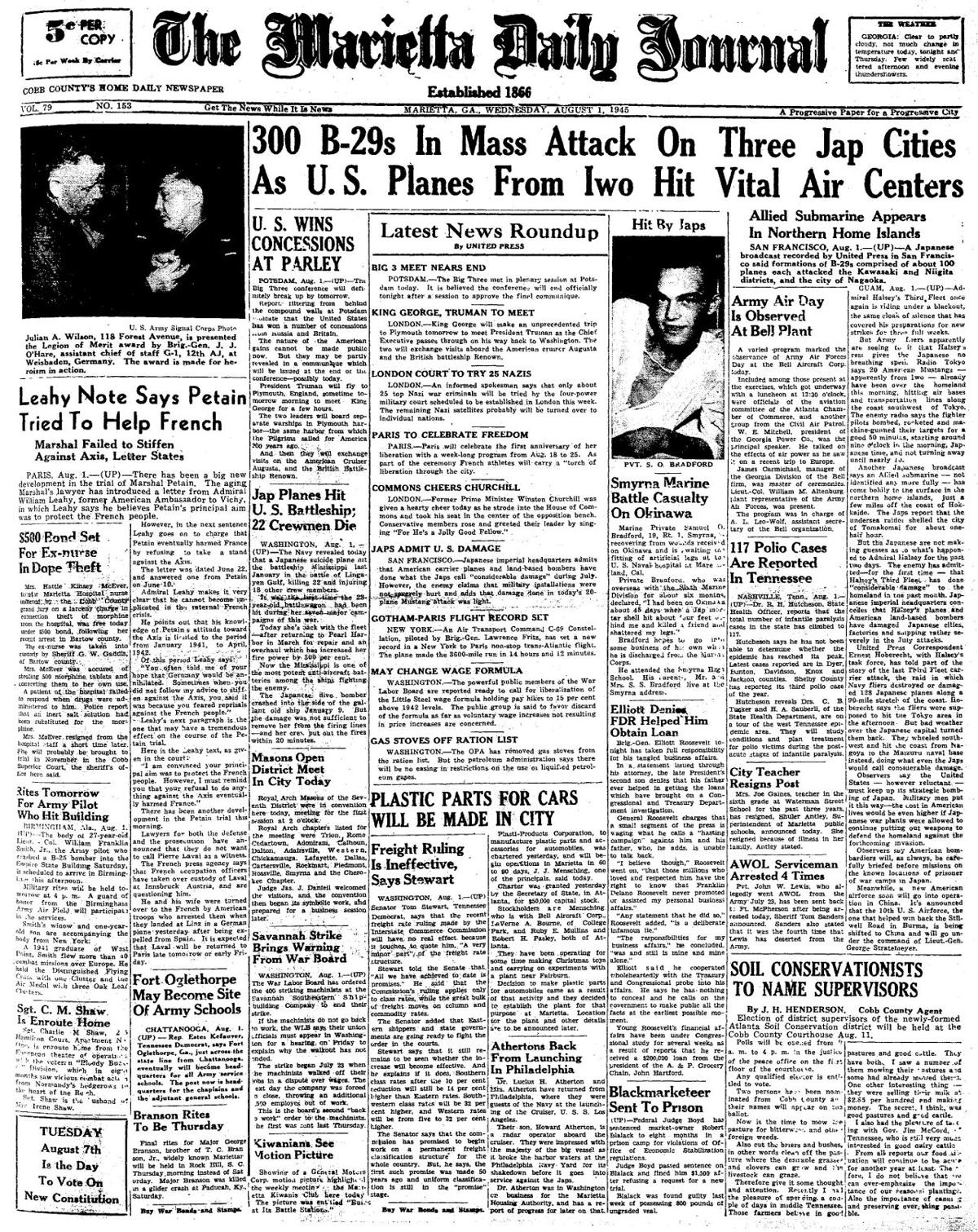 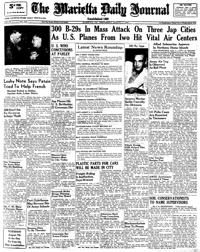 The Tuesday, July 27, 1920, edition of The Cobb County Times reported on the presentments of the Grand Jury for the July term of the Cobb County Superior Court. The main feature of presentments was the acceptance of Sheriff W.E. Swanson’s proposition for properly policing the county. Residents along Atlanta Road had petitioned the county commissioners about starting a county police force. Swanson outlined a plan that would not burden county taxpayers. The presentments also recommended that the Sheriff receive $1 per day instead of 75 cents for feeding three meals a day to prisoners.

The Friday, July 30, 1920, edition of The Cobb County Times reported the following items in the “News From Our Correspondents” column:

♦The Mableton section reported on the death of Civil War veteran John T. Glore. One of the oldest citizens in Mableton, Glore died the Tuesday before and was buried the next day in the Glore cemetery.

♦The Macland section reported on the sudden death of G.M. McElreath, 68, at his home the Friday before. McElreath was a former county representative in the Legislature and had served as Justice of the Peace in his district.

The Friday, July 30, 1920, edition of The Marietta Journal reported that Charles Davis, a Rome lawyer and well known in Cobb County for being the defendant in several land fraud cases, had reached the end of his defense in a Fulton County forgery trial. The case involved the forged name of late Judge Logan E. Bleckley on a land deed. His name was forged on “an engraved plate photographed sheet” and dated with the year 1852. That date was at least 30 years before plate photo printing was done in the country.

Civil War veteran Capt. Benjamin Aspinwall White, 85, was reported as having died at the residence of his daughter, Mrs. W.J. Black, the Friday before. Capt. White was born in Millegeville in January 1835. He graduated from the Georgia Military Institute in Marietta in 1854. When the Civil War broke out, he organized and equipped Company A, 26th Georgia Regiment and then served as their captain throughout the war. When the state capitol was moved from Milledgeville to Atlanta in 1868, Capt. White moved to Marietta.

♦“Booze hauled in a hearse in Connecticut, was judged by the officers to have too much kick in it to make a decent corpse, even though attended by a man in priestly garb, and decorated with floral offerings.”

The Friday, July 27, 1945, Marietta Daily Journal reported the details of how the 21st Bomber Command’s fire blitz laid waste to Japanese cities. The story, released by the public relations office of the bomber command, was told by Sgt. Edward C. Wigley of Marietta, a B-29 precision instrument specialist. Sgt. Wigley had been flying overseas with the “Billy Mitchell” bomb group, the pioneer B-29 unit of the 20th Air Force, for 18 months. Flying from bases in India and China, he participated in major strikes against Japan, Manchuria, Palembang and Burma for which he received four Bronze Battle Stars.

Maj. George Branson, brother of widely-known Marietta resident T.C. Branson Jr., was reported in the July 30, 1945, paper as having been killed the Saturday before in a glider plane crash at Paducah, Kentucky. The gliders were being towed by an Army transport plane and were forced to land in the Kentucky city because of bad weather. When the glider ships continued their flights toward Blytheville, Arkansas, the transport plane failed to clear the field and caused the gliders to crash. Maj. Branson was the only fatality.

Marine Pvt. Samuel O. Bradford, 19, of Smyrna was reported in the Wednesday, Aug. 1, 1945, paper as recovering from wounds received on Okinawa and was awaiting the fitting of artificial legs at a U.S. Naval Hospital. Bradford had been on Okinawa about 45 days when a Japanese mortar shell hit four feet behind him and shattered his legs.