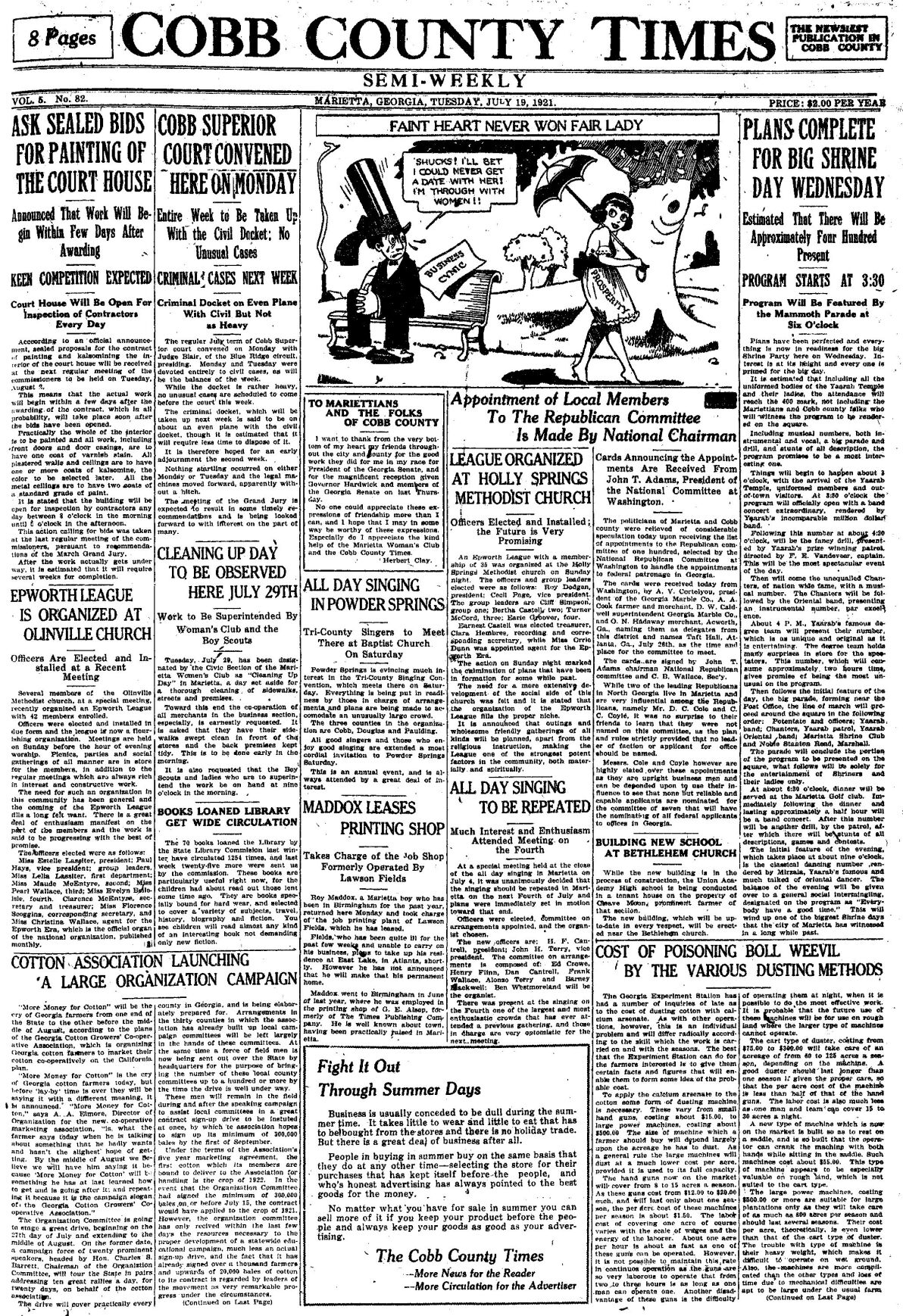 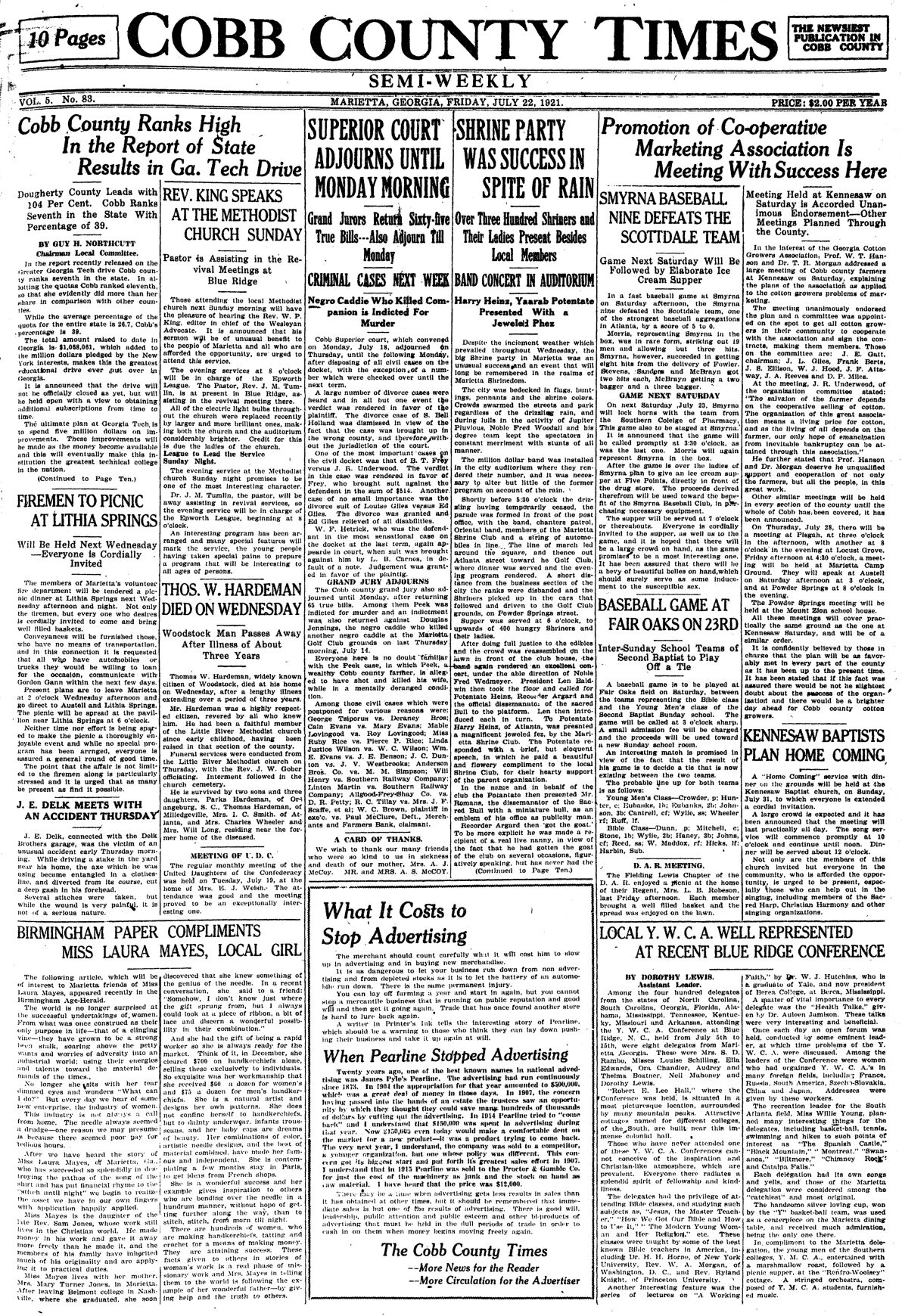 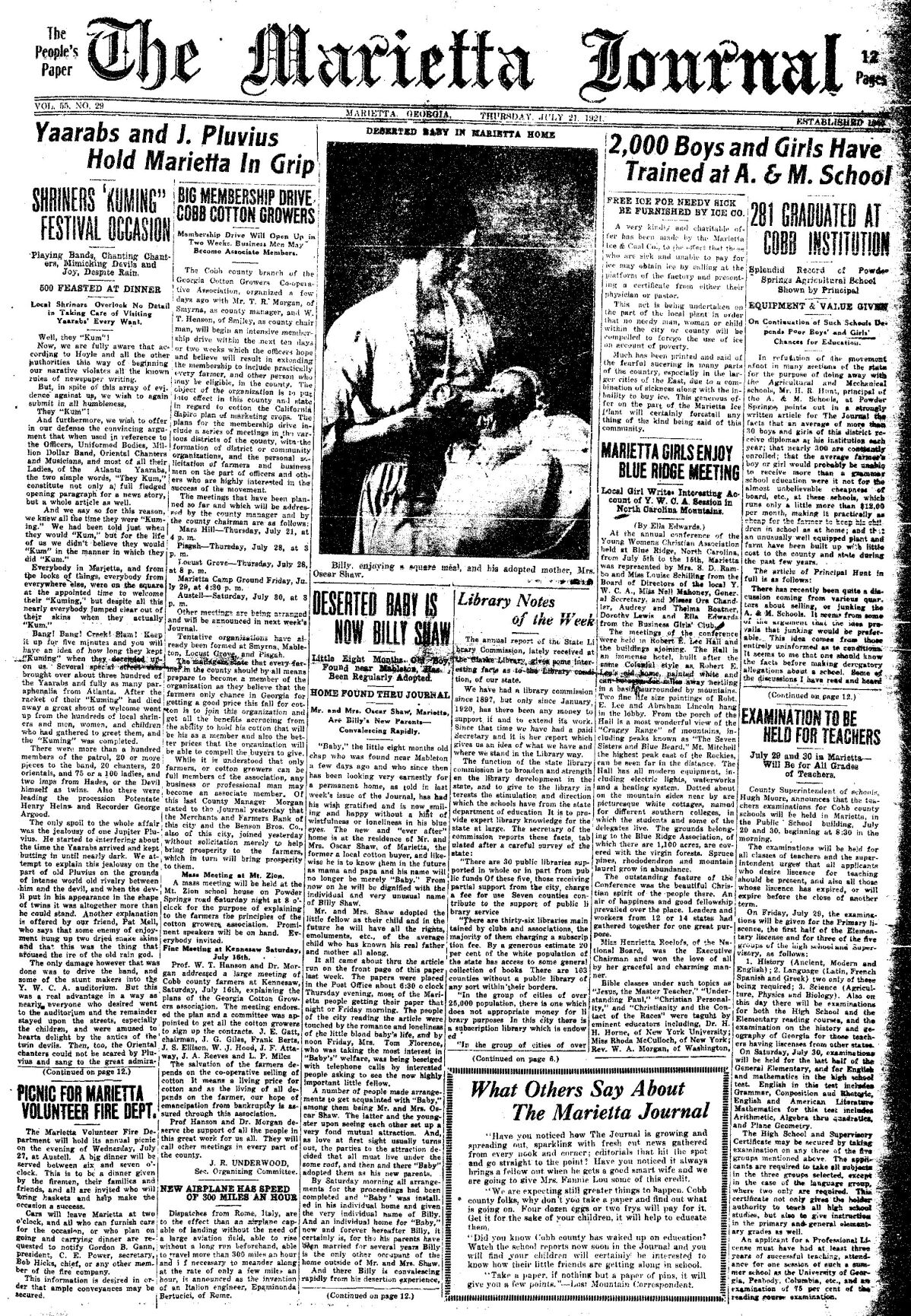 The Tuesday, July 19, 1921, edition of The Cobb County Times ran a full page ad on Page 3 for a Dollar Days sale at the W.A. Florence Dry Goods Co. in Marietta. Some of the interesting items being sold for $1 in the two-day sale were two pairs of ladies’ silk hose in grey, brown, black or white; two pairs of Tom Sawyer Overalls for Boys, sizes 2-8 years; and four bath towels, 21-inches by 40-inches.

The Friday, July 22, 1921, edition of The Cobb County Times reported that J.E. Delk of the Delk Brothers Garage suffered an unusual accident the Thursday before. While driving a stake in the yard near his home, Delk’s axe became entangled in a clothesline and was diverted from its intended course, which caused it to cut a deep gash on his forehead that required several stitches.

In the “News About The City” column written by Mrs. Harold Hawkins, it was reported that “the pretty little blue-eyed boy who was found” in the shade of some overhanging bushes on the Mason-Turner Road near Mableton over a week earlier had been adopted by Mr. and Mrs. Oscar Shaw. The boy was to be called “Billy.”

The Thursday, July 21, 1921 edition of The Marietta Journal in the Kennesaw section of the “News From Our Correspondents” column reported on the “considerable stealing and robbing” that had been occurring. The post office safe had recently been blown and $114 in money and stamps were taken. James Gray’s store was burglarized the Tuesday before and several pairs of shoes and some small change were taken. Buck Gattin’s shoe store was broken into the Saturday before. Two weeks earlier, Mr. Kelly’s store, two miles up the highway, was burglarized by two men from Atlanta who were later caught in their truck at the Chattahoochee River bridge. Frank Burt had 13 chickens stolen, Mrs. A.F. Scroggs lost six chickens and Mary Miller lost several chickens and a wire coop.

The Sunday, July 21, 1946, edition of the Marietta Daily Journal reported the following:

♦Grady E. Pence, whose back was broken the week before in an accident at the old Bell Bomber plant, was paralyzed from the hips down. Pence was crushed by a roll of roofing material as he was attempting to move some boxes with a lift dolly in the FHA warehouse.

♦Two Cobb County prisoners escaped from the county prison farm the Friday before. Curtis Ayers, who was serving time for attempted murder, had escaped for the second time in the past week. Grady Bagby, serving a 1-2 year sentence for burglary, escaped with Ayers. This was Bagby’s second attempt in the past month.

Douglas Cobb, 11, was reported in the Tuesday, July 23, 1946, paper as having brought to the Journal office a watermelon that he had grown almost to bursting inside the mouth of a gallon glass jug. Douglas had an acre of land planted with the fruit on Marietta Route 4, where he farmed with his grandfather, E.P. Pace. The young man attempted the experiment after hearing about someone successfully growing a jugful of corn. His little brother, Eddie Cobb, 7, was reported as having decided that he would conduct his own experiment and see if his watermelon would grow large enough to break his glass jug.

In the Tuesday, July 20, 1971, paper it was reported that telephone customers in Georgia might have to pay the 30% pay scale increase that Southern Bell employees won from the company following a week-long nationwide strike. The telephone union, Communications Workers of America, tentatively agreed to a new contract that would provide pay raises totaling $17.4 million in Georgia alone.