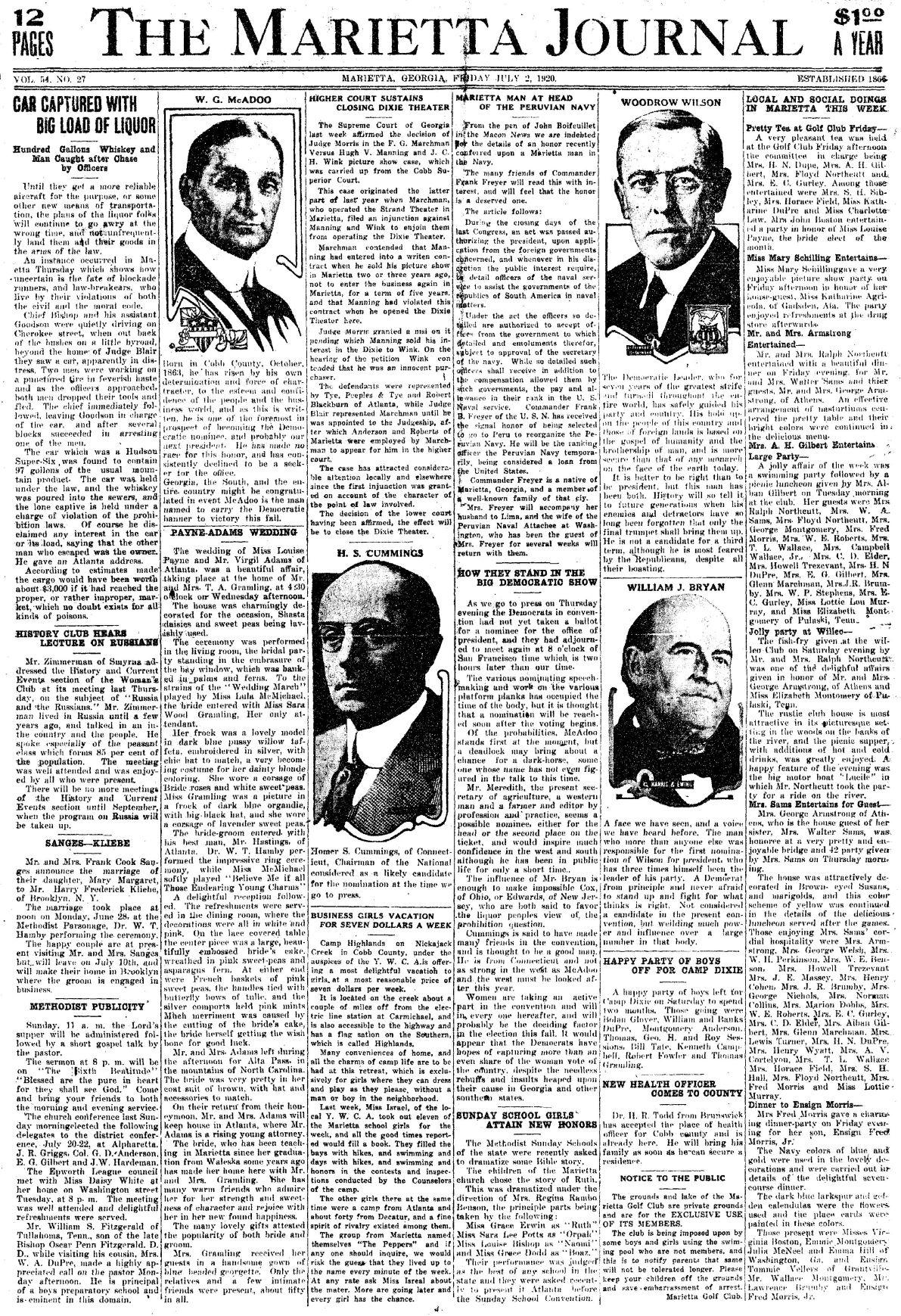 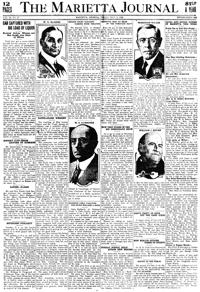 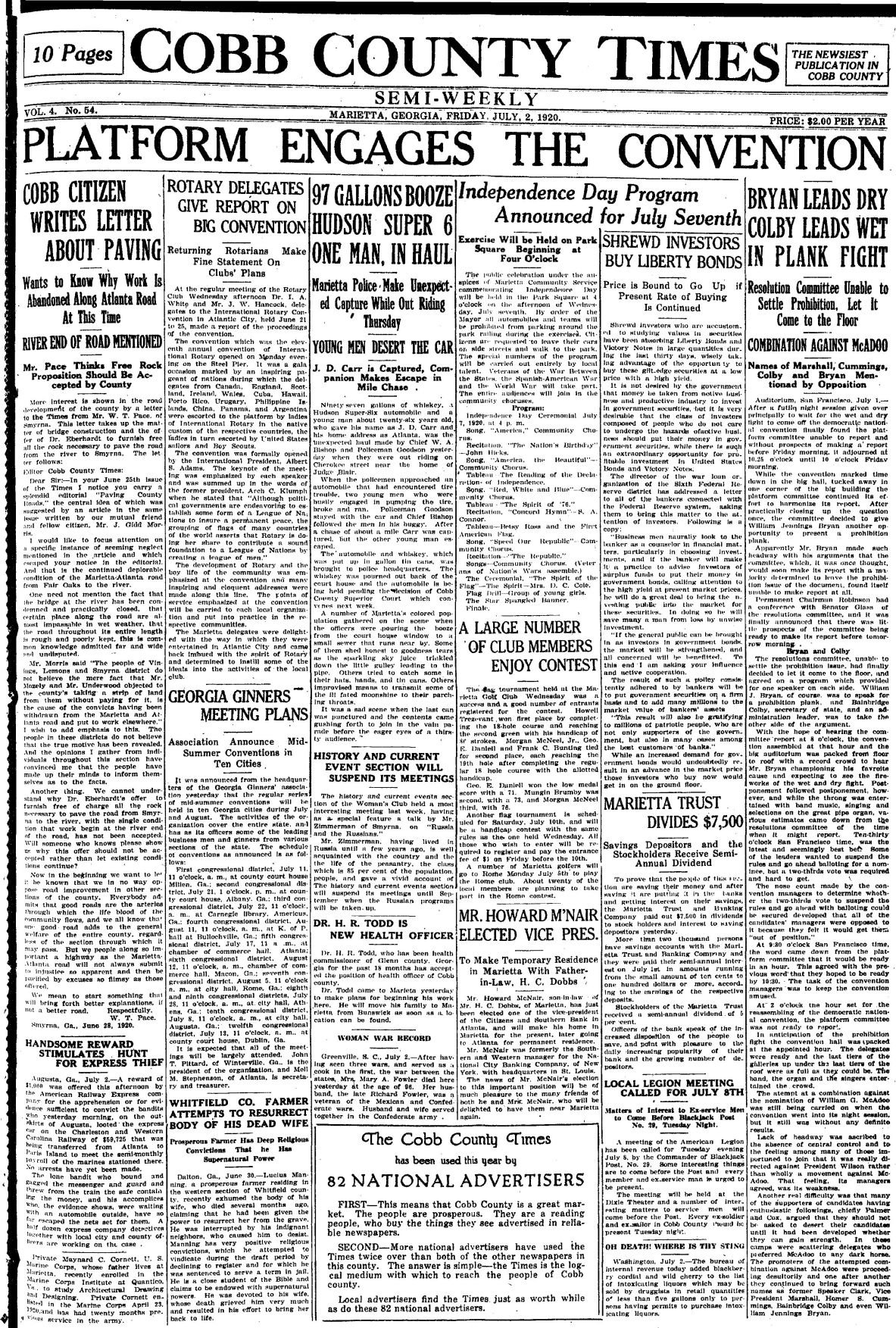 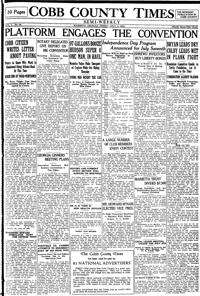 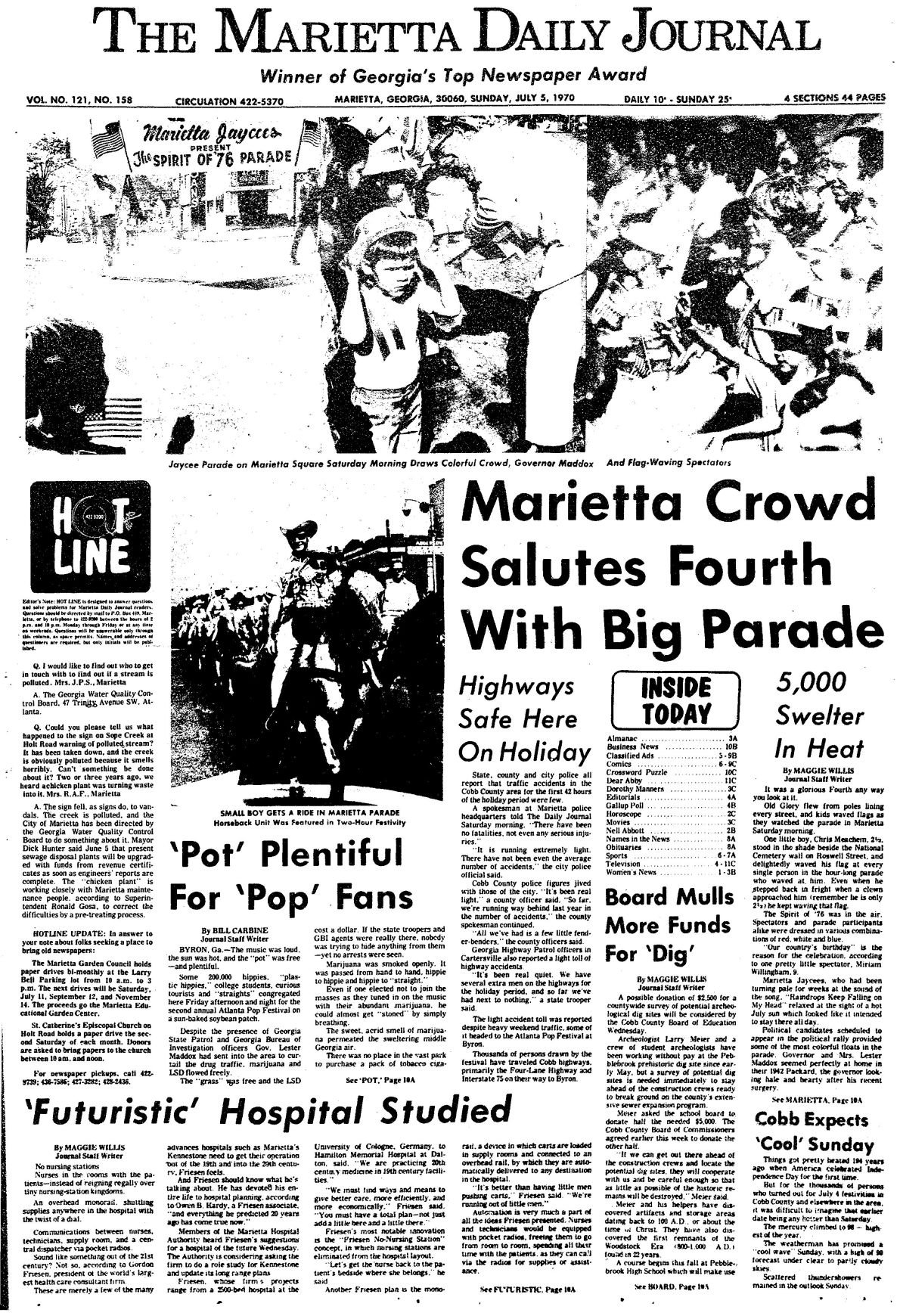 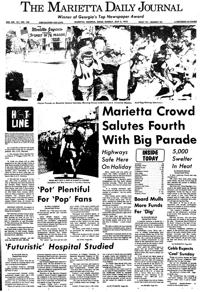 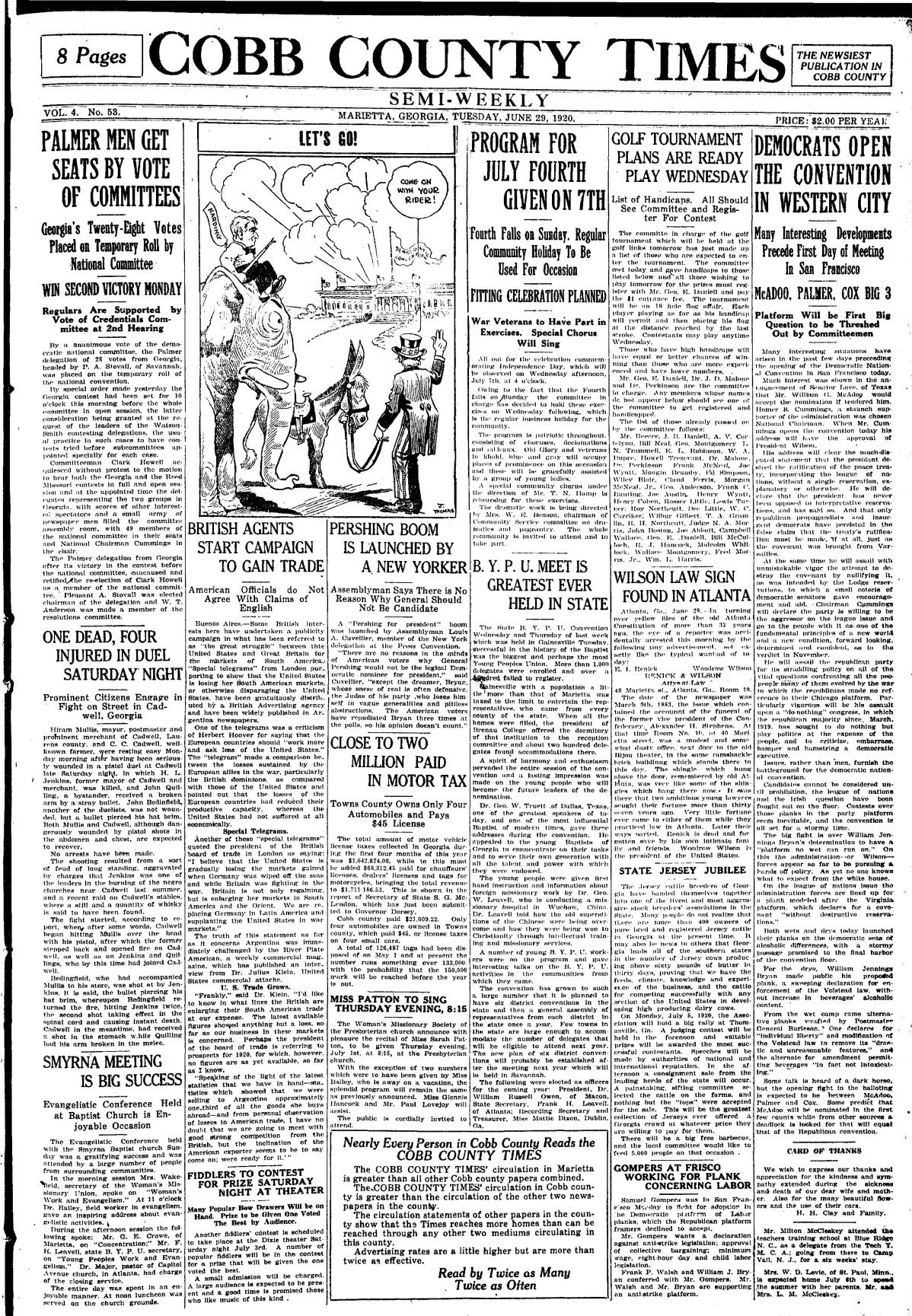 The Tuesday, June 29, 1920, edition of The Cobb County Times carried a story out of Atlanta about a fight between Mac Richards, an aged Buckhead farmer, and a six-foot long rattlesnake. Richards, who was mending a fence, disturbed the rattler in some heavy briars. After being struck at by the serpent, Richards seized a rail and pinned it to the ground. However, the rattler managed to twist itself free and chased Richards until the man was able to kill it with another piece of rail.

In the “News From Our Correspondents” column, the Mableton correspondent reported that Ernest, the two-year-old son of John F. Gann, fell out of a second story window some 12 feet to the ground and suffered only minor bruises.

The Friday, July 2, 1920, edition of The Marietta Journal reported Marietta Police captured the day before a Hudson Super-Six with 97 gallons of illegal whiskey, worth about $3,000. Under the Prohibition laws, the car was seized and the whiskey poured into the city’s sewers. One man was arrested, while another man escaped.

The Supreme Court of Georgia was reported as having affirmed the decision of Judge Morris in the F.G. Marchman vs. Hugh V. Manning and J.C.H. Wink picture show case the week before. The case, carried up from the Cobb Superior Court in the latter portion of 1919, centered on an injunction filed by Marchman, operator of The Strand Theatre, against Manning and Wink to prevent them from operating the Dixie Theater.

Marchman contended that Manning entered into a written contract when he sold his picture show in Marietta that he would not enter the business again within the city for five years. The contract was only two to three years old when Manning opened up the Dixie Theater.

The Journal carried an article from the Macon News that Marietta native Cmdr. Frank B. Freyer of the U.S. Navy had been selected to go to Peru to reorganize the Peruvian Navy. Freyer was to be the ranking officer in the Peruvian Navy temporarily and considered to be on loan from the United States.

In the Monday, July 2, 1945, Marietta Daily Journal were the following items:

♦Lamar Franklin was installed as president of the Marietta Rotary the Friday before. He succeeded Leo Aikman.

♦Al Bishop, Marietta’s Recreation Director, announced that a new record of 599 people visited the city’s pool in the 4 1/2 hours that it was open the day before.

♦The funeral for Staff Sgt. William D. Elrod of Marietta was announced for the next morning. Sgt. Elrod died in an Army hospital at Greensboro, North Carolina, the day before. He had served overseas for 20 months as a tail gunner on a B-17. He had returned to the States six weeks earlier and had been home on furlough two weeks prior to his death.

♦Only one fire was reported in Marietta for the Fourth of July and it caused only slight damage. Some men were cleaning the floor of the Hardage Service Station on Cherokee Street with gasoline that ignited and required the Fire Department to put it out.

In the Monday, June 29, 1970, paper it was reported that a 21-year-old Miami man was arrested in Marietta the day before with two ounces of suspected marijuana after he was involved in a hit-and-run accident with one of the eight cars that he had stolen between Miami and Marietta.

The Marietta Jaycees were reported in the Sunday, July 5, 1970, paper as having presented The Spirit of ’76 parade the day before on Marietta Square. The hour-long parade featured 5,000 spectators in combinations of red, white and blue in the sweltering July heat. There was also an appearance by Gov. Lester Maddox and his wife in their 1942 Packard among the colorful floats. Gov. Maddox was said to have looked “hale and hearty” after his recent surgery.