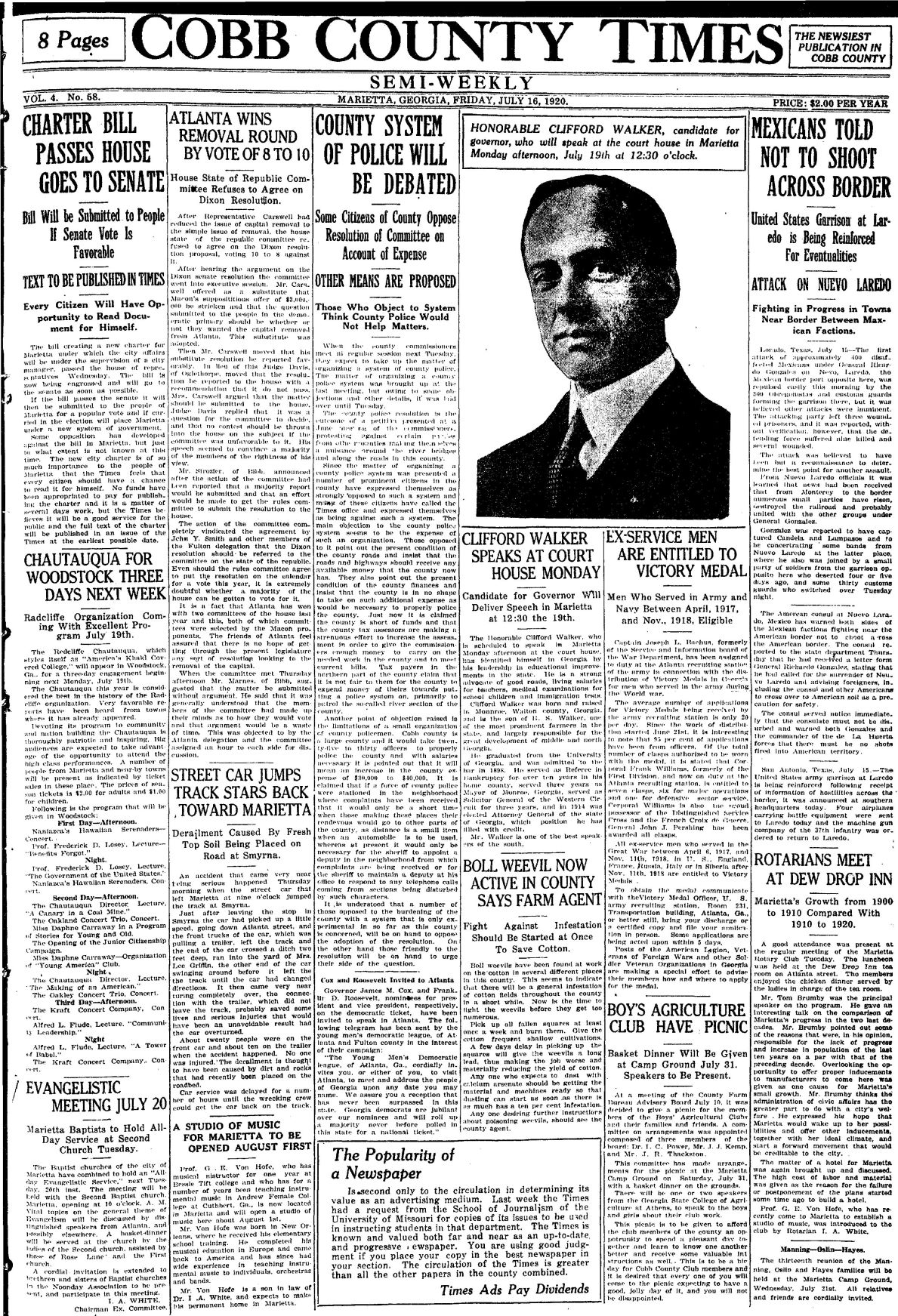 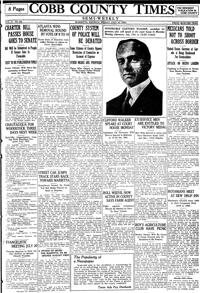 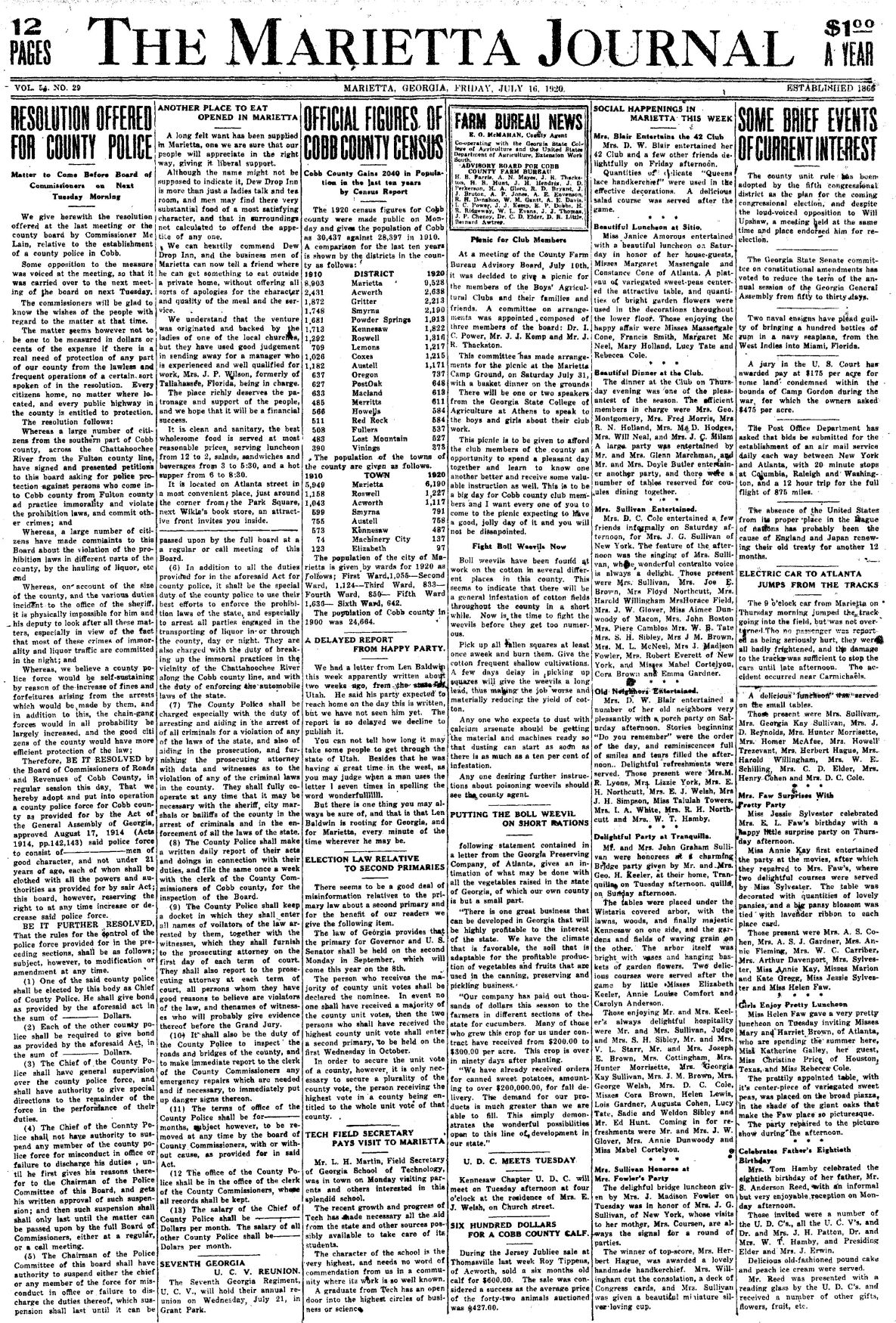 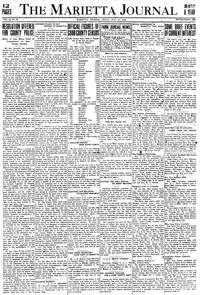 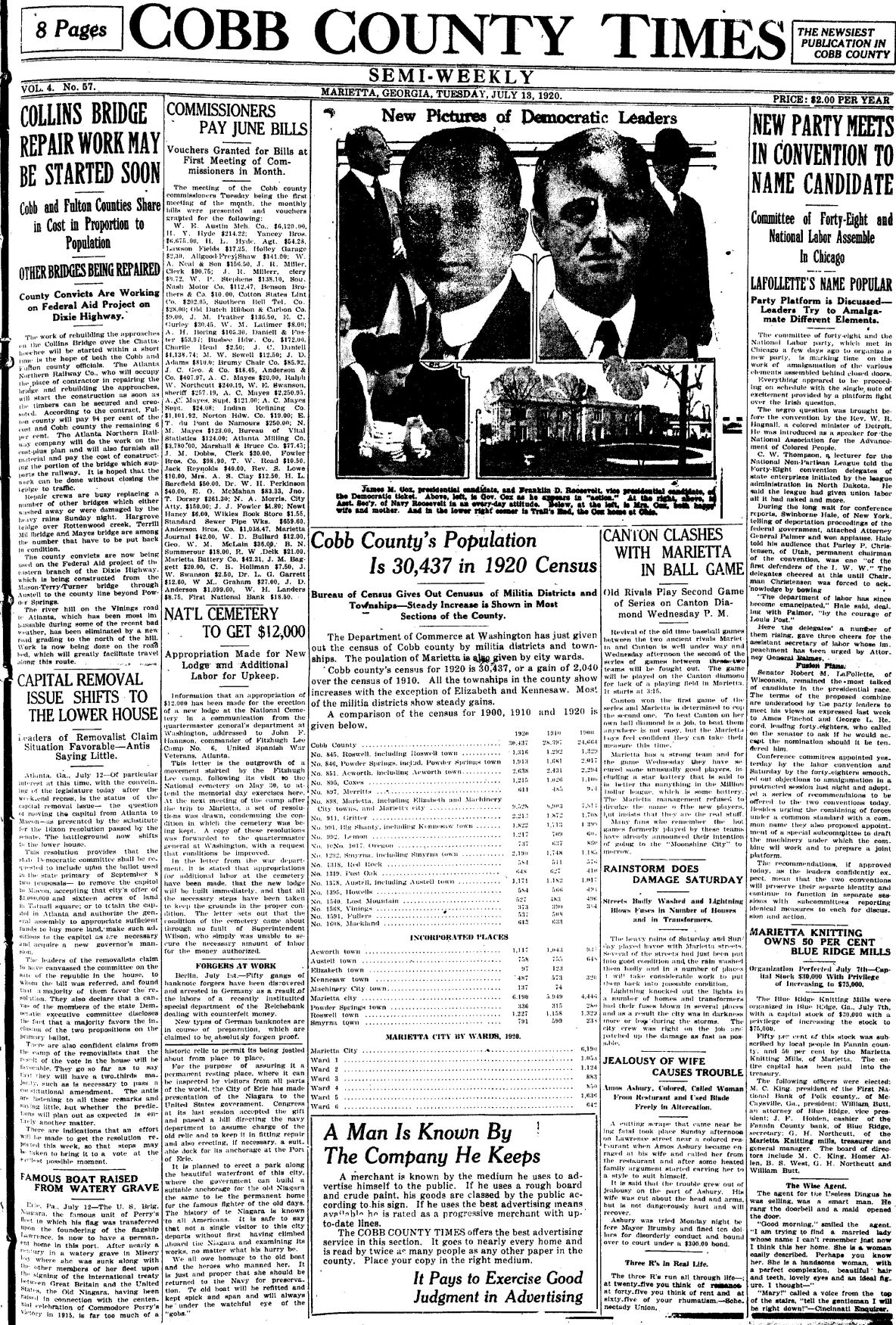 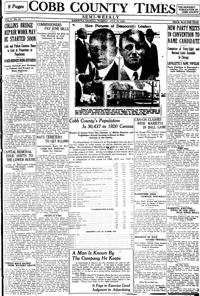 The Tuesday, July 13, 1920, edition of The Cobb County Times reported that the rebuilding of the Collins Bridge over the Chattahoochee River was to begin as soon as timbers could be secured. The contract stated that Fulton County would pay 94% of the cost, with Cobb covering the remaining 6% and the Atlanta Northern Railway Company would do the work, furnish all material and pay for the part of the bridge that supported the railway.

Cobb County’s Census for 1920 reported the county’s population at 30,437, which was a gain of 2,040 residents over the 1910 Census. All townships in the county reported increases with the exceptions of Kennesaw and Elizabeth, which was located around present day Kennestone Hospital in Marietta.

An argument that grew out of jealousy between a husband and wife was reported as turning into “a cutting scrape” the Sunday before on Lawrence Street in Marietta near a black restaurant. The husband called the wife out from the restaurant and after heated words “started carving her.” The woman was cut about the head and arms, but was expected to recover. The husband was tried before Mayor Brumby, fined $10 for disorderly conduct and held under a $300 bond.

The Friday, July 16, 1920, edition of The Cobb County Times reported on a street car accident where the vehicle jumped the track on Atlanta Street in Smyrna and ran into the yard of Mrs. Lee Griffin that morning. The car, which was pulling a trailer, nearly overturned.

It was believed that the trailer, which did not leave the tracks, saved lives and prevented serious injuries. There were 20 people on the front car and 10 on the trailer when the accident occurred. The derailment was believed to have been caused by dirt and rocks recently placed on the roadbed.

In the Friday, July 16, 1920, edition of The Marietta Journal, the editors endorsed on the front page a new place to eat just off Marietta Square — The Dew Drop Inn.

The venture, originated by the ladies of one of the local churches, put Mrs. J.P. Wilson, formerly of Tallahassee, Florida, in charge as the manager.

The editors said that “the place richly deserves the patronage and support of the people” and that “it is clean and sanitary” with “the best wholesome food served at most reasonable prices.” The restaurant was located on Atlanta Street next to Wikie’s bookstore.

In the “News From Our Correspondents” column, the Lost Mountain section correspondent wrote:

Homer Guffin was hurt on July 6 by an unruly horse that threw him down and dragged his guano distributor over him. Guffin was badly bruised and fractured a bone in his shoulder.

In the Monday, July 16, 1945, Marietta Daily Journal both county officials and Marietta police officers were on the lookout for cars speeding bootleg liquor through the county into Fulton. In one of two incidents over the weekend, Sheriff Tom Sanders and Deputy Marshal Bryan chased a car from Acworth at speeds reaching over 100 miles per hour before it was lost in Buckhead.

Maj. Jack Millar of Marietta was reported in the Wednesday, July 18, 1945, paper as being injured the day before in a B-17 crash near Salina, Kansas. Nine people were killed in the crash. A wire to Millar’s parents from the War Department reported that he had suffered a dislocated right hip and a chipped right shoulder. Maj. Millar was one of the first B-29 pilots to bomb Tokyo.

In the Monday, July 13, 1970, paper it was reported that “the crumbling shell of the gymnasium building at Larry Bell Park” was to be destroyed with a blast of dynamite the following Thursday to kick off a clean-up campaign sponsored by the Cobb Chamber of Commerce.

The day of the explosion, the paper reported that “the big boom was a big bust for all the spectators.” As smoke cleared from the 330-stick charge of dynamite, the old burned shell of the building was still standing.