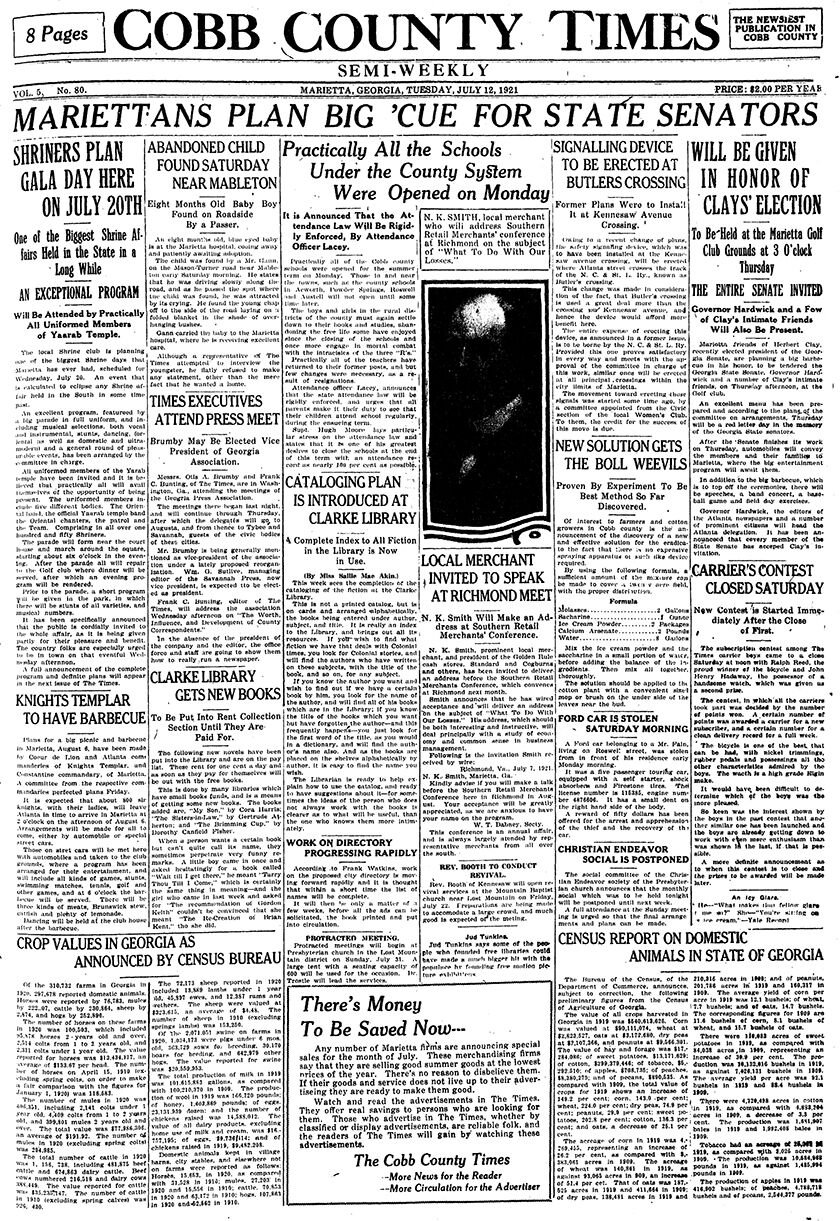 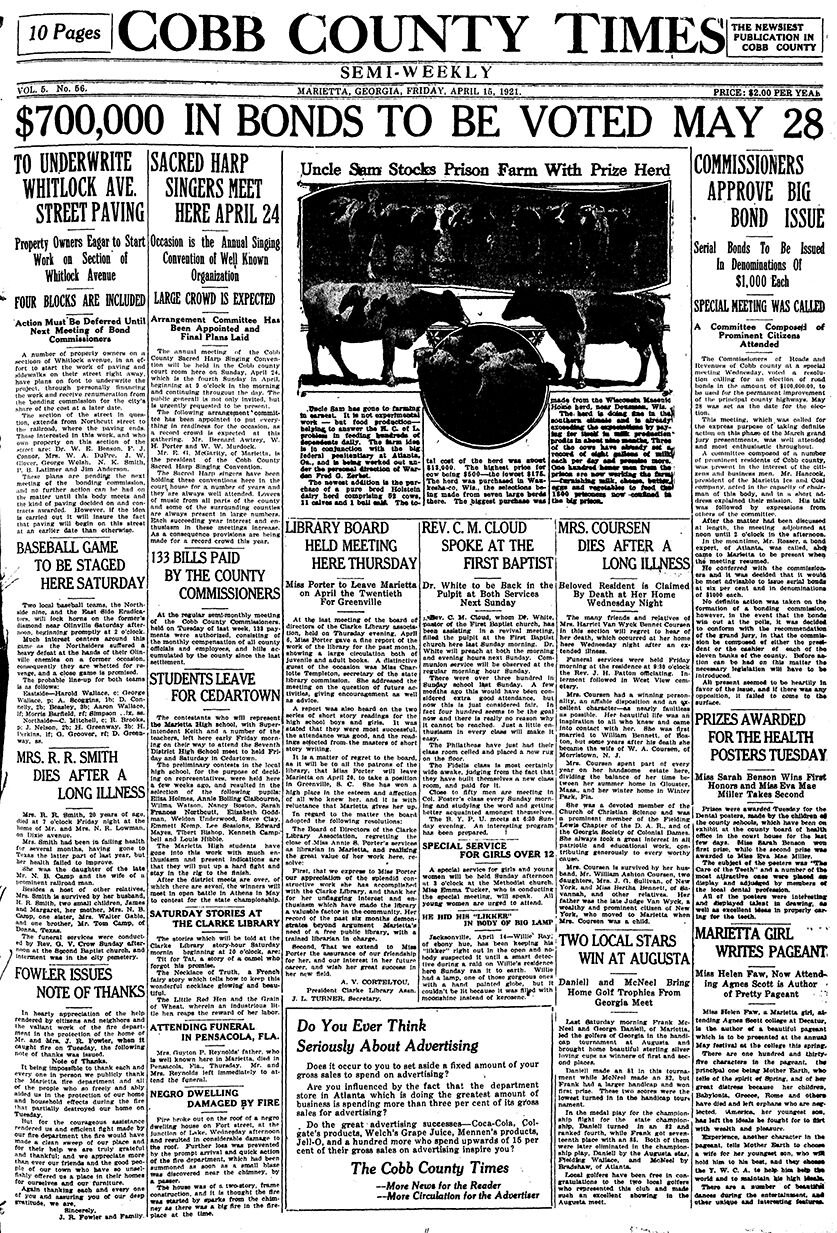 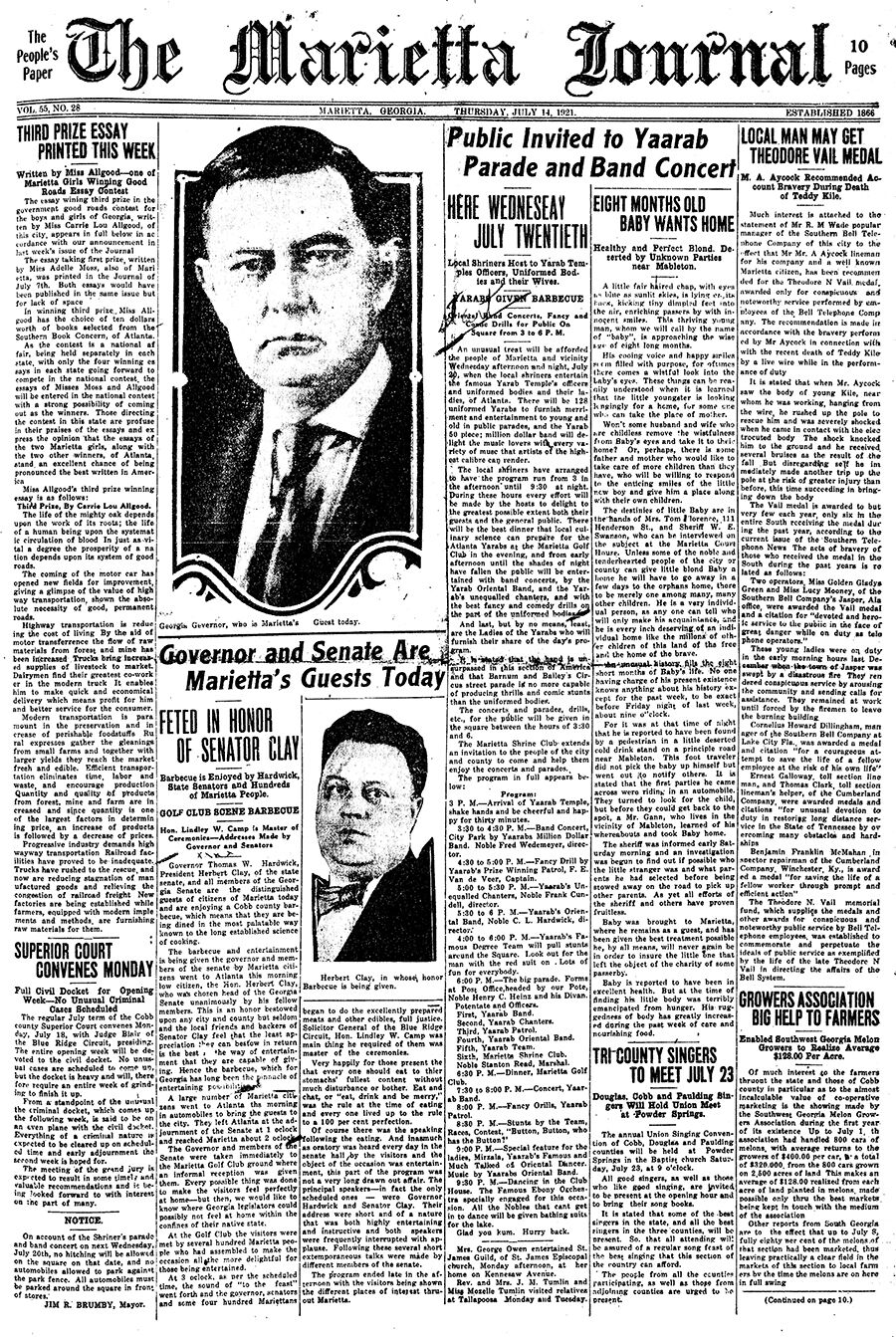 The Tuesday, July 12, 1921, edition of The Cobb County Times reported that an eight-month-old baby boy was found abandoned on a folded blanket in the shade of some overhanging bushes on the Mason-Turner Road near Mableton. The child was discovered by a Mr. Gann, a passerby, who was driving slowly along the road and heard the child’s cries. Gann took the baby to the Marietta Hospital, where it was “receiving excellent care.”

A change of plans was announced regarding the safety signaling device that was to be installed at the Kennesaw Avenue railroad crossing. It was decided that the signal would instead be erected where Atlanta Street crossed the North Carolina & St. Louis Railway’s tracks, known as Butler’s Crossing. The change was made because Butler’s Crossing saw more traffic crossing the tracks than Kennesaw Avenue.

The Friday, July 15, 1921, edition of The Cobb County Times carried a story from Jacksonville, Florida about a black homeowner who was keeping his liquor out in the open and no one suspected a thing until a sharp detective discovered the secret during a raid the Sunday before. The homeowner was said to have “a lamp, one of those gorgeous ones with a hand-painted globe, but it couldn’t be lit because it was filled with moonshine instead of kerosene.”

In the “News About The City” column, written by Mrs. Harold Hawkins, it was reported that George Daniell and Frank McNeel had returned from playing in the State Golf tournament at Augusta the Sunday before. Both men were “fortunate enough to bring back a cup.”

The Thursday, July 14, 1921 edition of The Marietta Journal reported that Gov. Thomas W. Hardwick, State Senate President Herbert Clay and all members of the Georgia Senate were guests of citizens of the City of Marietta that day for a barbecue and entertainment. A large number of Mariettans went to Atlanta in automobiles following the 1 p.m. adjournment of the Senate and brought the guests to the Marietta Golf Club.

In the Thursday, July 11, 1946, edition of The Marietta Daily Journal, it was reported that Mariettans reaped a harvest of peaches that morning at $1.40 a bushel after a truck carrying several hundred bushels of south Georgia peaches wrecked at the intersection of Church Street Extension and the Four-Lane Highway, now known as U.S Highway 41. The owner of the truck sold the peaches at a discount from a temporary stand at the Marietta fire house since three-quarters of his load were bruised.

A panic at the Strand Theater was reported in the Friday, July 12, 1946, paper when an unidentified black woman screamed out during “one of the torrid scenes in ‘The Outlaw.’” Thinking that she had screamed “Fire!” the people around her raced for the exits and the word was passed on to the white balcony, which also started exiting. The article said that “one man struck a match, then bedlam broke out.” Manager Harris Rogers rushed downstairs and assured the movie-goers that nothing was wrong and they should return to their seats. During the commotion, a few people had kept their seats and watched the film without interruption.

The following events were reported in the Monday, July 15, 1946, paper:

♦Three Cobb County prisoners escaped the county farm that morning and were still at large as of press time. Clifford Leroy Mobley was serving a two-year sentence for forgery. Clarence C. Raulerson was serving 1-2 years on a larceny charge and stealing an automobile. Curtis W. Ayers was serving a sentence for attempted murder.

♦Searchers were still dragging the Chattahoochee River near Roswell that day for the body of Horace Dobbs, 17, of Powder Springs Road, who drowned the day before when he stepped into a hole while wading in the shallows.

♦Marietta City Recreation Director Al Bishop announced that the people who threw watermelon rinds into the wading pool at the high school recreation center the night before caused a great deal of trouble. The wading pool had to be drained and scrubbed.