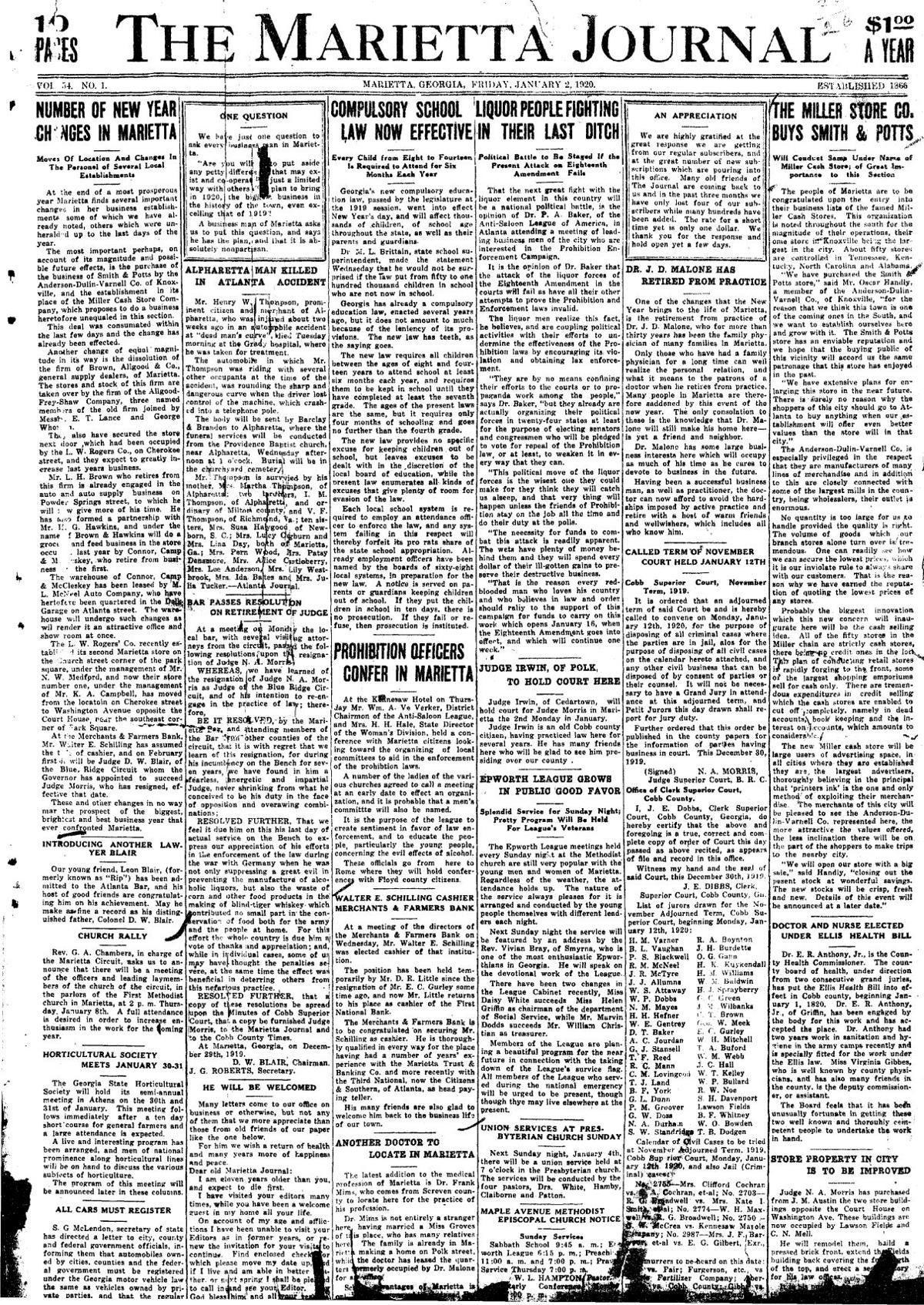 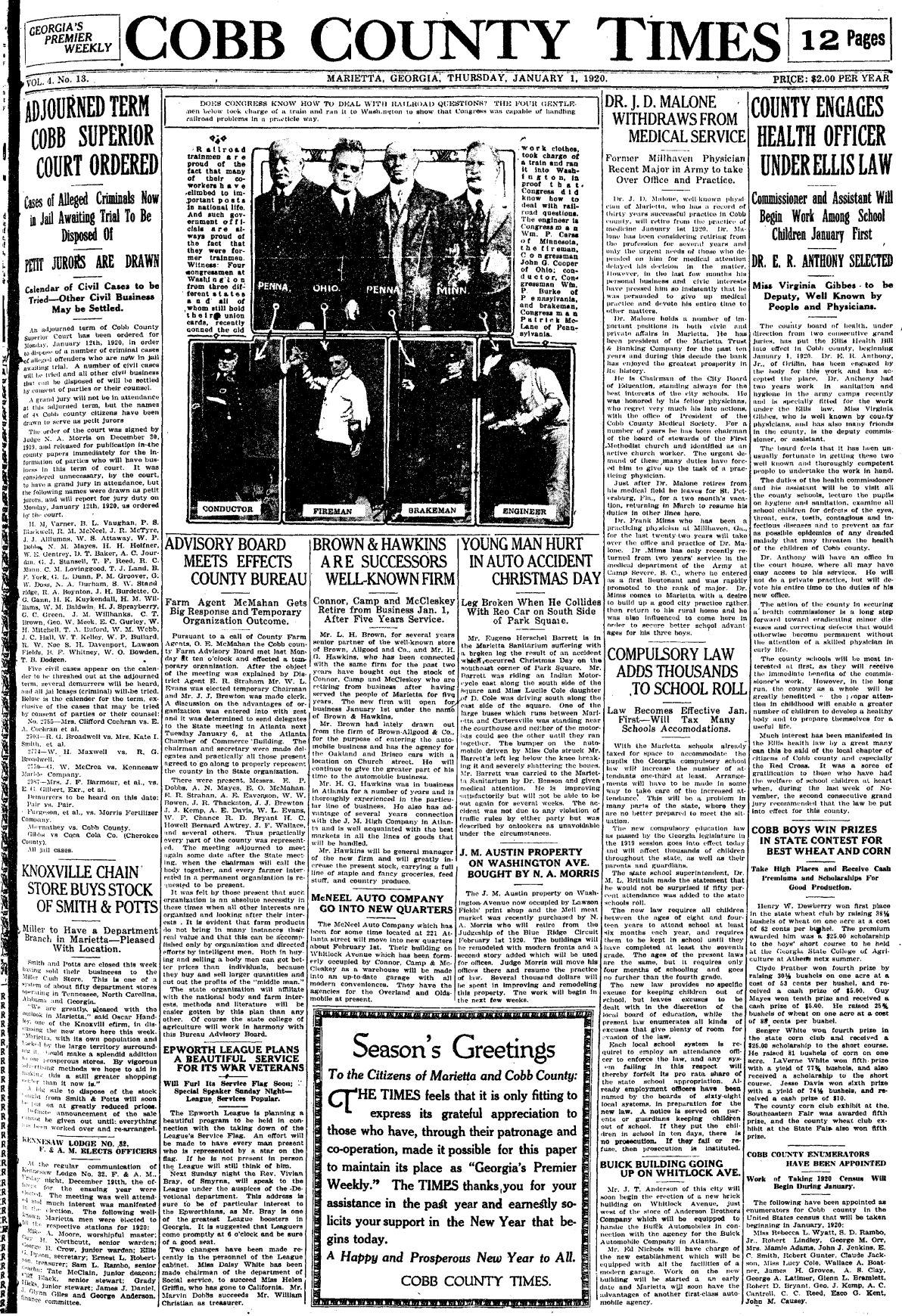 The Thursday, Jan. 1, 1920, edition of The Cobb County Times reported Eugene Herschel Barrett was in the Marietta Sanitarium with a severely broken leg sustained in a Christmas Day car accident on the southeast corner of Park Square.

Barrett was riding an Indian motorcycle when he was struck by Lucile Cole, daughter of D. Cole. One of the large buses that run between Marietta and Cartersville was near the courthouse and obstructed the view of both motorists until they collided.

J.T. Anderson was reported as expected to soon begin construction of a new brick building on Whitlock Avenue, just west of the Anderson Brothers Company store. The new building was to be equipped to handle Buick automobiles and Ed Nichols was to be in charge of the garage.

The Times editors wrote the following items on the editorial page:

♦ “The new 50-year lease of the (Western and Atlantic Railroad) to the (Nashville, Chattanooga and St. Louis Railway) has gone in effect. But we may not have to wait more than 49 years for a new station at Marietta.”

The Friday, Jan. 2, 1920, edition of The Marietta Journal reported that the compulsory school law was now in effect.

Dr. M.L. Brittain, state school superintendent, stated the Wednesday before that he would “not be surprised if the law put from 50,000 to 100,000 children in school who are not now in school.” The new law required all children between the ages of 8 and 14 to attend school at least six months of the year, and required them to stay in school until they completed at least the seventh grade.

Previously, the state required children of the same ages to attend only four months of school a year and stay until they completed the fourth grade.

Henry W. Thompson, a citizen and merchant from Alpharetta, was reported as having died at Grady Hospital the Tuesday before from injuries sustained in a car crash two weeks earlier at “dead man’s curve” in Atlanta. Thompson and several occupants were riding in the car and rounding the curve when the driver lost control and crashed into a telephone pole.

At the Kennesaw House the Thursday before, Wm. A. Vo Verker, district chairperson of the Anti-Saloon League, and Mrs. H.H. Hale, state director of the Women’s Division, held a conference to organize local committees to aid in the enforcement of the Prohibition laws.

Dr. J.D. Malone was reported as retiring after 30-plus years of serving as a family physician to the Marietta community.

The Journal editors wrote the following items on the editorial page:

♦ “Henry Ford has ‘cut another melon’ for his employees giving them an extra dividend of something like $10 million to wind up the year. The people will have to “crank up” a good many Fords to pay this.”

♦ “While ‘swearing off’ the bad things why not ‘swear on’ a few good ones to take their place. It might help you to stay ‘put.’”

♦ “This year will go down in history as the first year of the great drought, although a large part of the country has been more or less on the waterwagon for several years.”

In the “News From Our Correspondents” column, Black Eyes, the Pine Mountain Academy correspondent, wrote — “There seems to be plenty of corn in the cribs and plenty of meat in the smokehouse. Why should people worry about the high prices if they continue to raise plenty of supplies at home.”

In the Monday, Dec. 29, 1969, Marietta Daily Journal it was reported that a four-inch bottle of explosive powder, which was thrown by someone in a group of 100 anti-American demonstrators, narrowly missed Vice President Spiro T. Agnew’s limousine outside the U.S. Embassy. There were no injuries in the incident, which happened a few hours after Agnew arrived in Manila, the capital of the Philippines. This was Agnew’s first stop on a 23-day, 10-nation Asian goodwill trip.

Police said that the bomb was thrown by a Filipino youth that had begun demonstrating outside the building. Two other bombs were said to have been tossed outside the embassy’s entrance before Agnew’s arrival.

Burglars, unhappy because they couldn’t find any money, were reported in the Tuesday, Dec. 30, 1969, paper as having turned into vandals and “tore apart” Maple Avenue Methodist Church of Marietta the night before.

Most of the damage was confined to the church’s office, but evidence was found that the pulpit cabinet had been searched. The vandals broke typewriters, other equipment and a small press. Entry to the church was made through a basement window.

Roswell Street Baptist Church was also reported as having been burglarized the day before. There wasn’t any vandalism, but three microphones were stolen.

Two men suspected of burglarizing a Piedmont, Alabama, hardware store and stealing 30 guns were reported in the Friday, Jan. 2, 1970, paper as being arrested in Austell that day. A third suspect was picked up a short time beforehand in Atlanta.