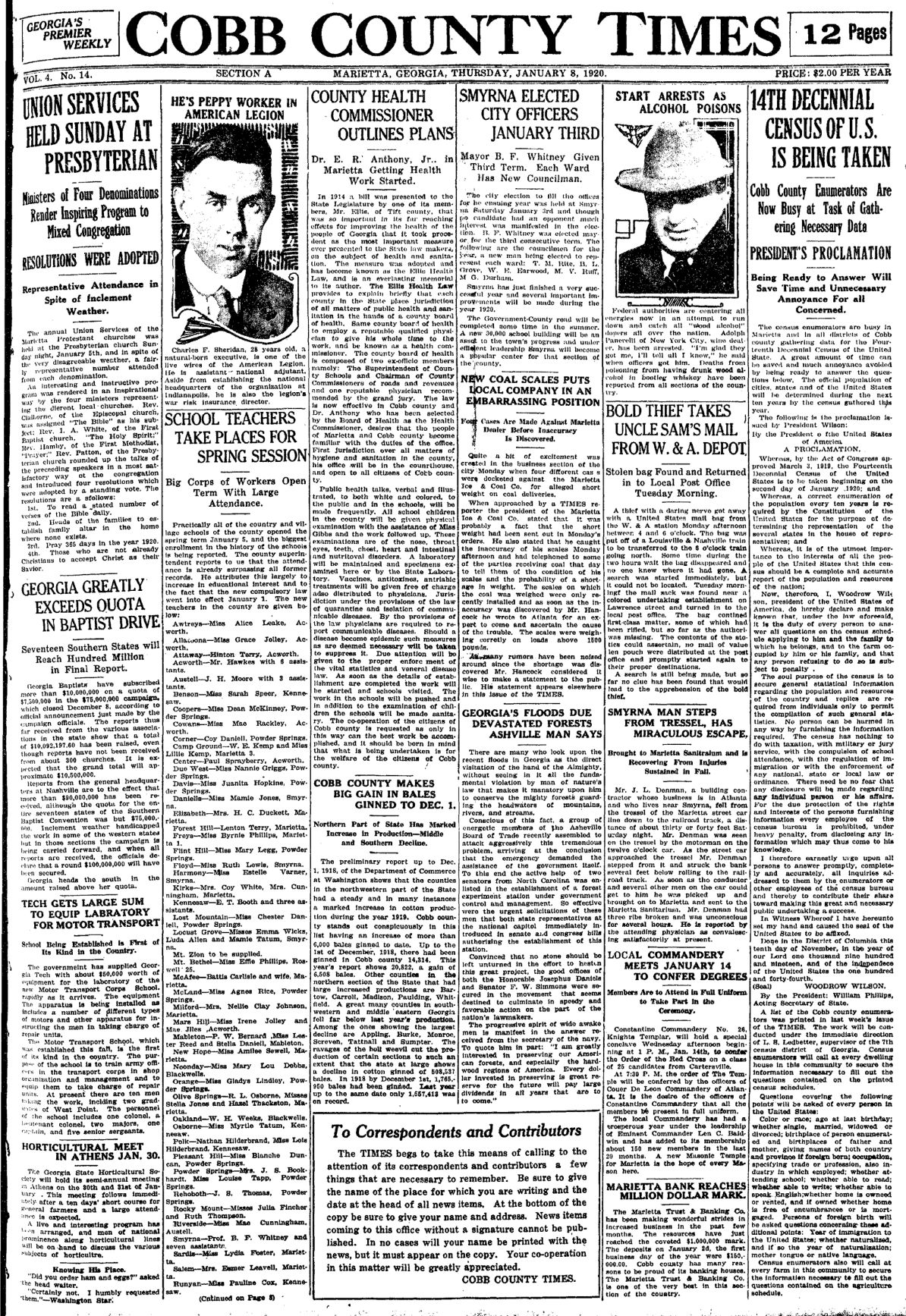 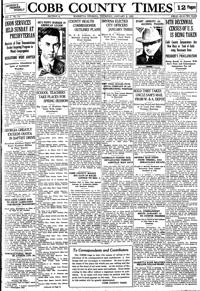 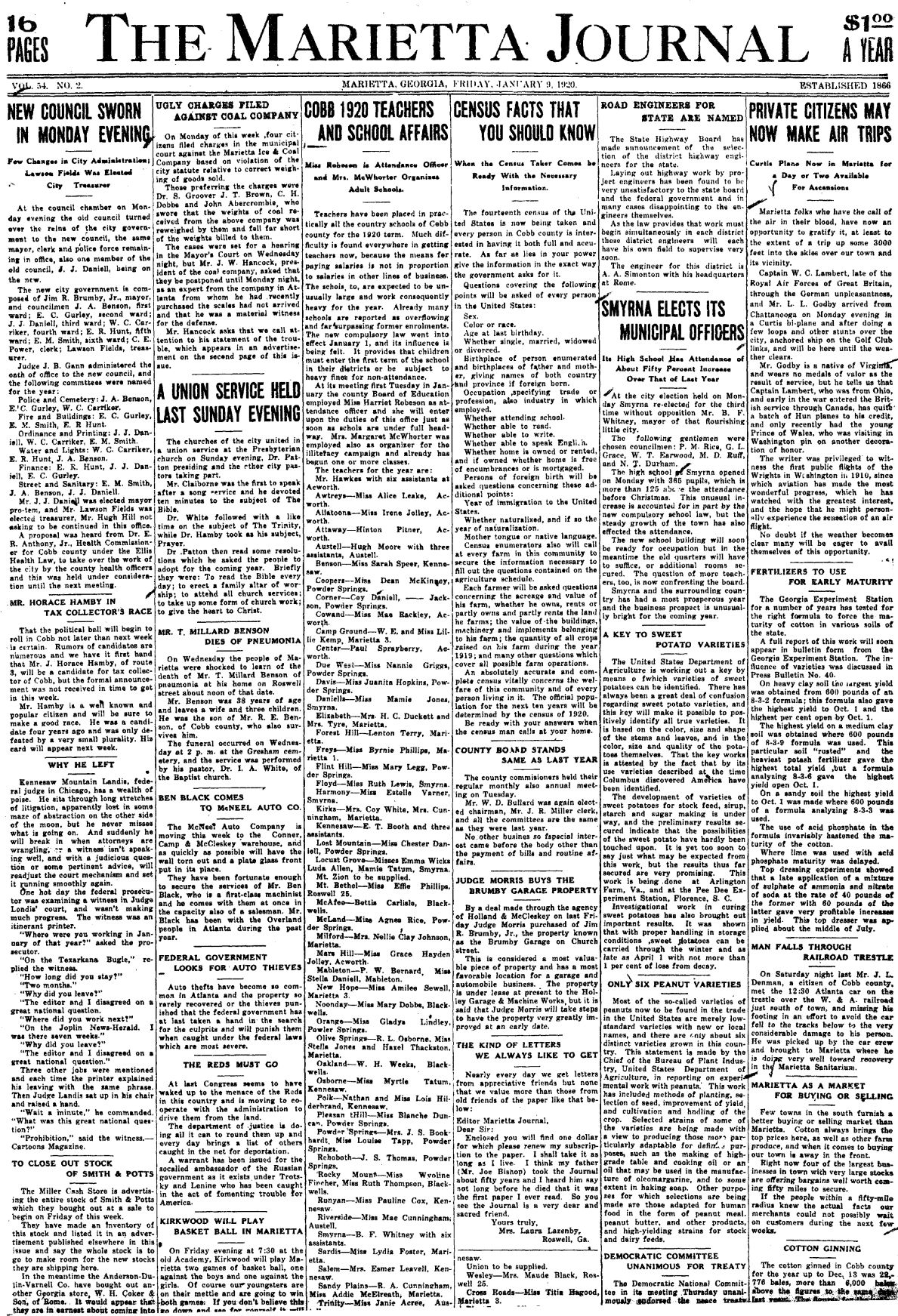 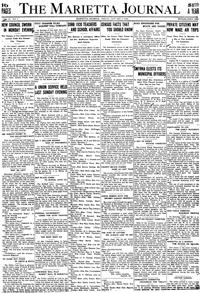 From the Jan. 9, 1920, edition of The Marietta Journal. Pictured is a series of photographs showing a brand new Light Overland Four automobile traversing up and down Stone Mountain with “very little difficulty.”

From the Jan. 9, 1920, edition of The Marietta Journal. Pictured is a series of photographs showing a brand new Light Overland Four automobile traversing up and down Stone Mountain with “very little difficulty.”

The Thursday, Jan. 8, 1920, edition of The Cobb County Times reported that “a thief with a daring nerve” stole a U.S. mail bag from the Western & Atlantic Railroad station the Monday before between 4 and 6 p.m.

The bag had been left at the Marietta depot by a Louisville & Nashville train and was to be transferred to the 6 p.m. W&A train heading north. The missing bag was found the next morning near a black funeral home on Lawrence Street. Some of the first class mail within had been “rifled,” but nothing appeared to be missing.

J.L. Denman, a Smyrna building contractor, was reported as having fallen from the Marietta street car tressel and onto the W&A railroad tracks 30 to 40 feet below the Saturday night before.

Denman was seen on the tressel by the midnight street car motorman. As it approached, Denman stepped away, “missing his footing” and fell onto the bank below before rolling onto the tracks. He suffered three broken ribs and was unconscious for several hours.

The Friday, Jan. 9, 1920, edition of The Marietta Journal reported that auto thefts had become so common in Atlanta with the property rarely recovered that the federal government was taking a hand in the search for the culprits.

At the Smyrna city elections held the Monday before, Mayor B.F. Whitney was re-elected for the third time without opposition. P.M. Rice, G.L. Grace, W.T. Earwood, M.D. Ruff and N.T. Durham were choosen as councilmen.

Four Marietta citizens were reported as having filed charges in the municipal court against the Marietta Ice & Coal Company after allegedly finding that shipments of coal from the company were reweighed by them and found to be far short of what they were billed.

On the second page of the paper, J.W. Hancock, president of the company, ran an advertisement that addressed the situation and offered an explanation.

Hancock’s ad said that a new Moline Pitless scale was installed by the Fulton Supply Co. of Atlanta and tested by James A. Forsyth, a scale expert from Atlanta. The scale appeared to be weighing correct until the company discovered it was coming up “short from 300 to 600 pounds on the ton of coal.” Hancock claimed that they discovered the shortage before the customers and tried to reach as many as they could by telephone and promised to correct the shortages.

The Journal editors wrote on the editorial page that “the man who sells wood-alcohol whiskey, is a murderer, and the man who even takes a chance of drinking it, is a fool.”

The editors also reprinted on Page 7 an item from The Commerce News that read: “There’s at least one consolation a flyer has while riding in an airship. He knows that while in the air he will not be run over and murdered by some reckless drunk fool, operating an automobile.”

Trial of three lawsuits totaling $80,000 was reported as being brought against Cherokee County in U.S. District Court the Wednesday before.

The suits were the result of a bridge collapse in July 1918, where one soldier was killed and several others were injured. The bridge was said to have given way beneath an Army truck full of soldiers and officers that were part of “a posse going into north Georgia in search of deserters and slackers.”

In the “News From Our Correspondents” column, the Kennesaw correspondent, Gipsy, had the following items:

♦ James Gray was reported as being elected mayor with the city councilmen being J.A. Skelton, H.B. Bozeman, Frank Flinn and Frank Burt.

♦ Gipsy also wrote: “The vaudeville dance from Marietta, which stayed in Mayor G.W. Prichards’ pasture, was burned after several night’s performance here on Dec. 23, 1919. This should be a warning to the mayor and vaudeville proprietors that they can’t put such things over on Kennesaw.”

The editors followed this with a note that said: “That vaudeville dance certainly did not originate in Marietta. (It) only stayed here for a short time and was as unwanted as it was to Kennesaw.”

Al Bishop, Marietta’s recreation director, was reported in the Sunday, Jan. 4, 1970, edition of The Marietta Daily Journal as having retired the Friday before after 36 years of service. Bishop was presented a new 1970 Plymouth station wagon as a token of appreciation from several friends in Marietta and Cobb County the day before at Marietta High School’s gym.

Vice President Spiro T. Agnew was one of a series of guest columnists writing pieces for regular columnist Holmes Alexander. Agnew’s column was on “one of the subjects that has made him the most controversial speaker in the country today — youthful dissent and its ramifications for America.”

Also that day, the Ford Foundation was reported as having purchased a 300-acre tract of land near “the southern boundary of the Lockheed-Dobbins reservation” for future development. The purchase price was over $3 million and was “one of the largest real estate transactions ever completed in Cobb County.”

A third story in that paper reported that Seventh District Congressman John W. Davis was “dead set” against manned flights to Mars. Davis, a member of the House Science and Astronautics Committee which oversaw the space program, said he had nothing against future unmanned flights to Mars, but stated that manned flights “could not be justified” in terms of the money required for such a venture.