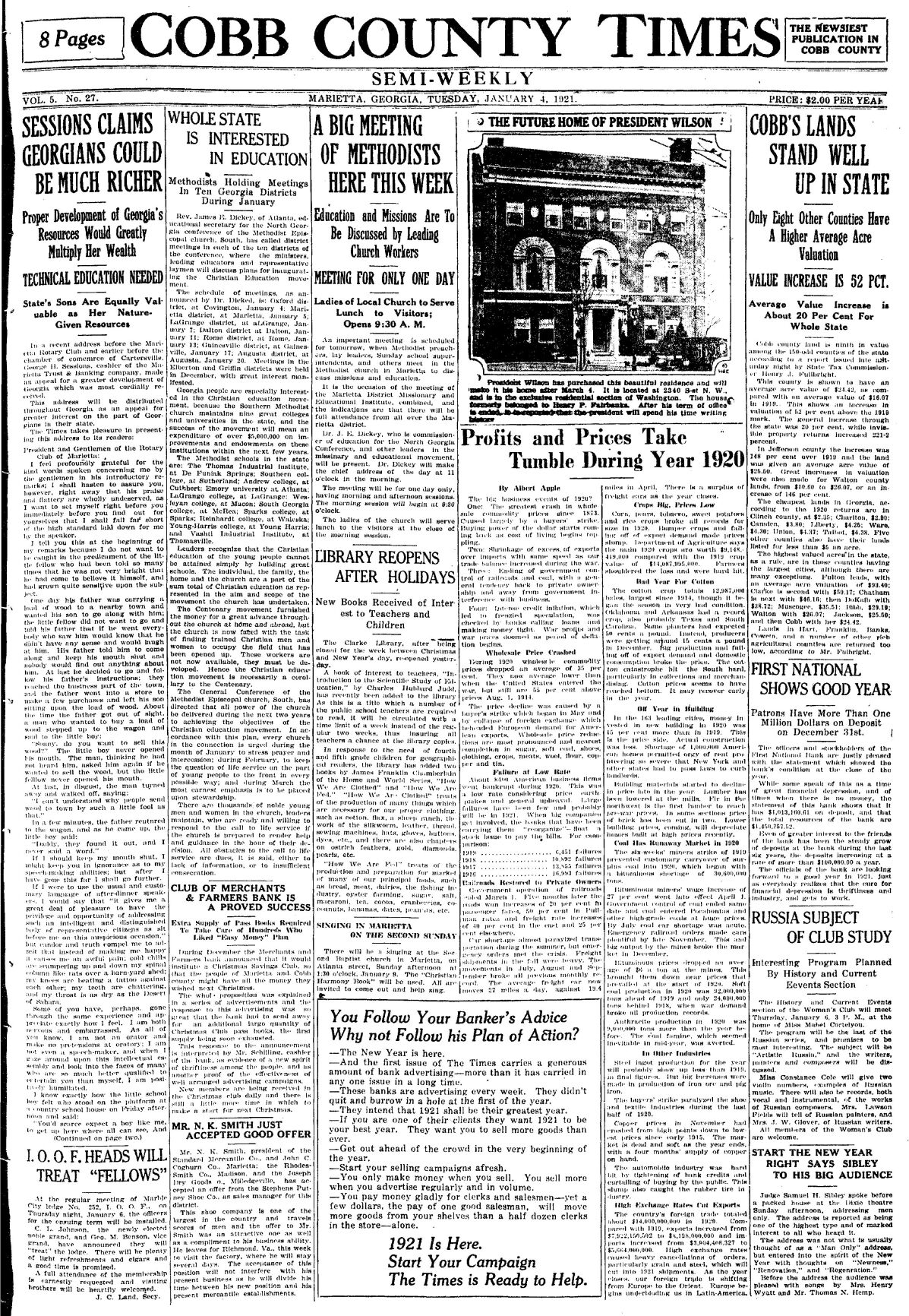 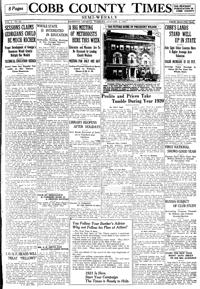 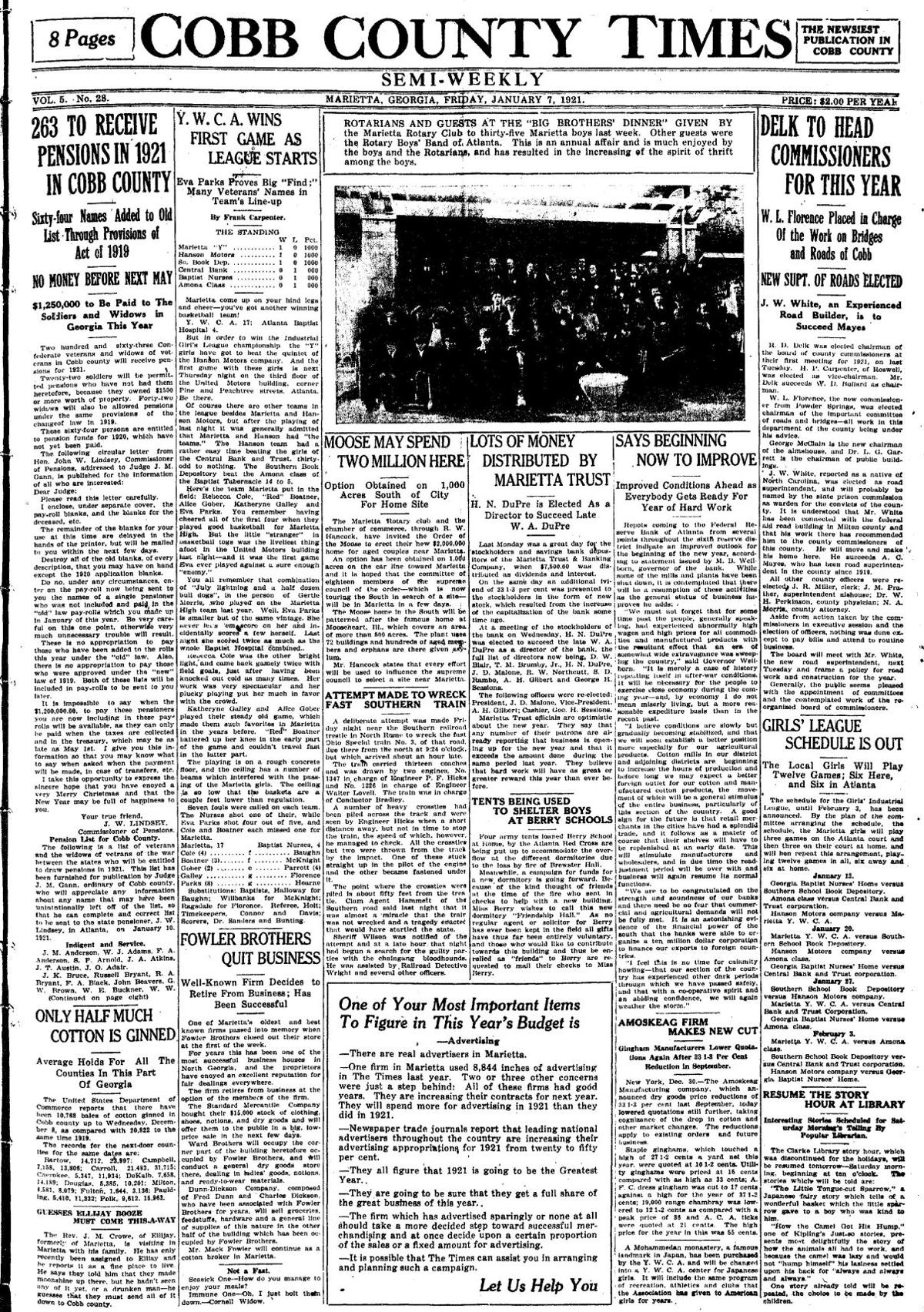 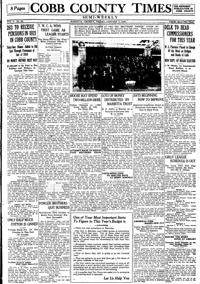 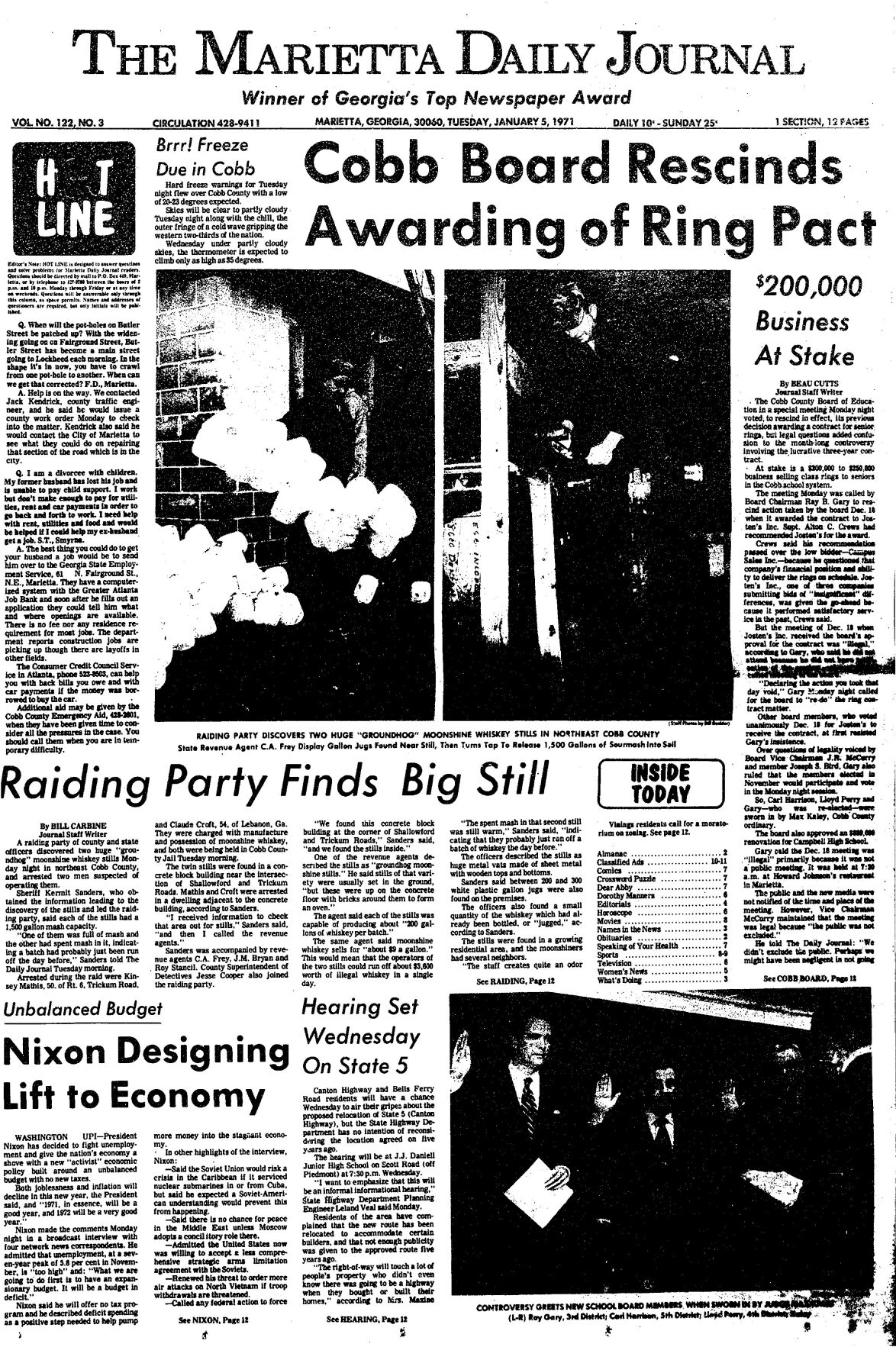 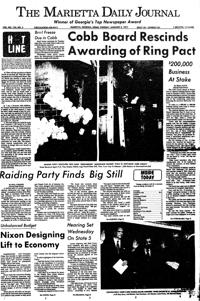 The front page of the Marietta Daily Journal from Tuesday, Jan. 5, 1971.

The front page of the Marietta Daily Journal from Tuesday, Jan. 5, 1971.

The Tuesday, Jan. 4, 1921, edition of The Cobb County Times reported on the murder of A.S. Jones, 60, a well-known farmer living near Gray. Jones was found dead with his skull crushed by an axe blow and his throat cut inside the front room of his small house. After three days of investigation, authorities had no leads.

Of the 1920 figure, 52 of them were in the South and 9 in the North and the West. Of the Southern states, 9 lynchings belonged to Georgia.

Rev. J.M. Crowe of Ellijay, formerly of Marietta, was visiting family in Marietta after recently being assigned to the north Georgia city. Rev. Crowe said that he had been told that moonshine was being made in Ellijay, but he had not seen any of it or a drunken man. He was quoted as saying that he guessed they must send all of it down to Cobb County.

A deliberate attempt was made the Friday before to sabotage the tracks near the Southern Railroad trestle in North Rome and wreck the fast Ohio Special train No.3, which was arriving about an hour late. The train, carrying 13 coaches, was drawn by two engines — No. 1347 operated by Engineer P.F. Hicks and No. 1226 operated by Engineer Walter Lovell.

A number of heavy crossties were piled across the track. Hicks saw them, but was not able to stop the train. The impact threw all but two of the crossties from the track. One of the two was stuck straight up in the pilot of the engine and the other fastened underneath it.

The editors once again took up the call for Marietta to get her streets paved. On the editorial page, they told how the Tuesday before around 11 p.m., four Marietta women were returning from a social function in a large touring car on Kennesaw Avenue.

The quartet, while doing their best to avoid the large potholes on the unpaved street, landed one of their front wheels “firmly into an OPEN sewer.” With the car stuck, the women were forced to leave the vehicle. One of the women had to walk home in her evening dress through ankle deep mud.

The editors cited that Marietta had a population of 7,000 and $2 million in bank deposits. The editors said the streets are “a sad reflection upon the efficiency of (Marietta’s) administration” and “something ought to be done or somebody ought to quit.”

The Monday, Jan. 7, 1946, edition of The Marietta Daily Journal reported the following:

♦Esmond Davis, 23, an escaped prisoner from the Cobb County prison farm, surrendered the Saturday before to Warden John Hood. Convicted a year earlier on charges of stealing a safe from the Georgia Produce Company, Davis escaped from the farm on Oct. 15, 1945. Immediately following his escape, a wave of safe-cracking broke out in Atlanta.

♦The Georgia Highway Department was reported as having almost completed plans to replace some 25 miles of Georgia highway that was to be flooded by the Lake Allatoona project.

In the Tuesday, Jan. 5, 1971, paper it was reported that a raiding party of county and state officers discovered “two huge ‘groundhog’ moonshine whiskey stills” the night before in northeast Cobb County and arrested two men suspected of operating them. Sheriff Kermit Sanders said each of the stills had a 1,500 gallon mash capacity. One was full of mash and the other had spent mash in it, indicating a batch had just been run the day before the raid. The stills were capable of producing about 200 gallons of whiskey per batch. The twin stills were found in a concrete block building near the intersection of Shallowford and Trickum Roads.