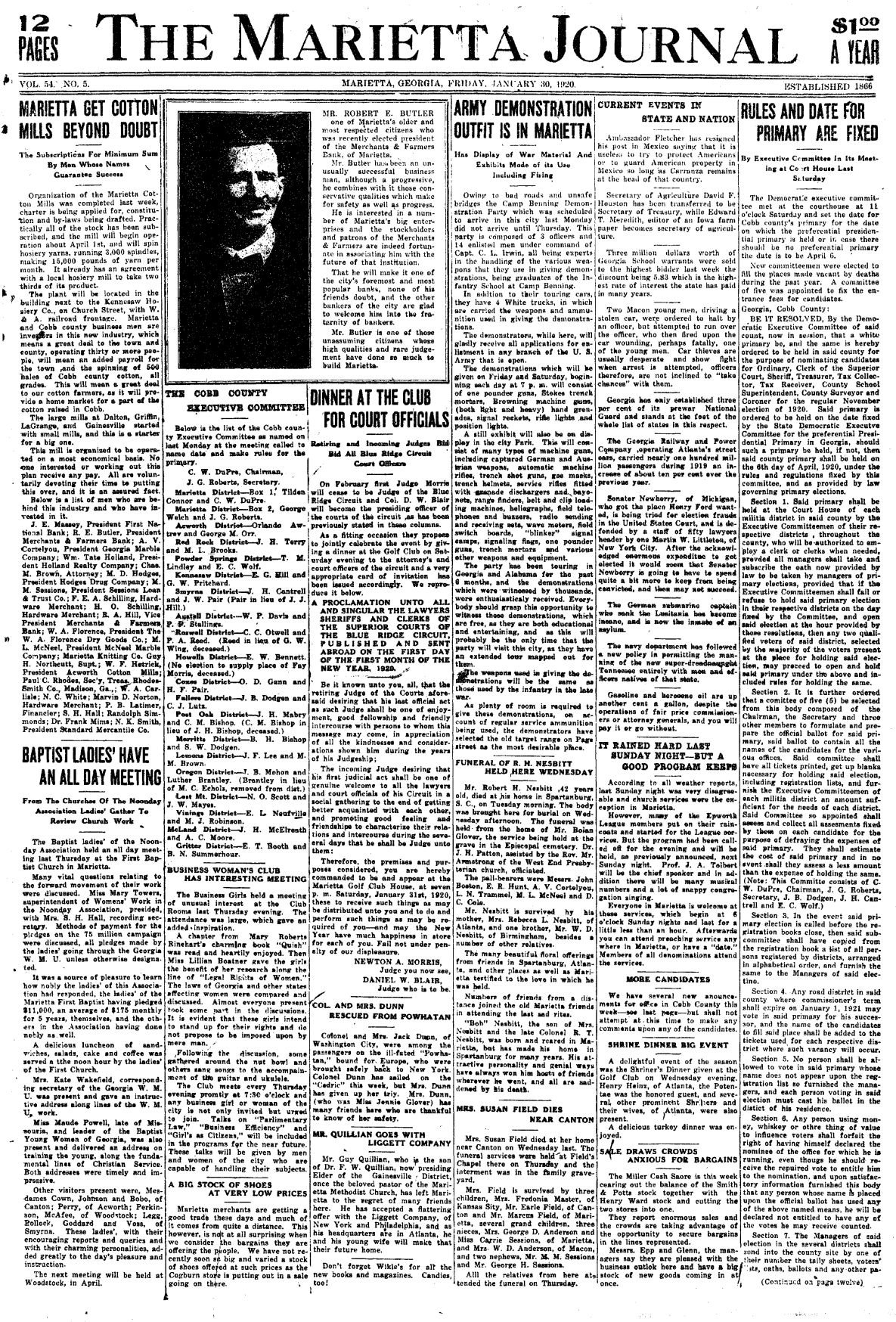 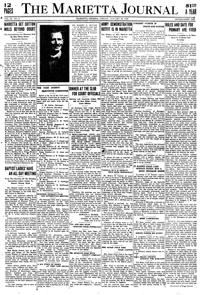 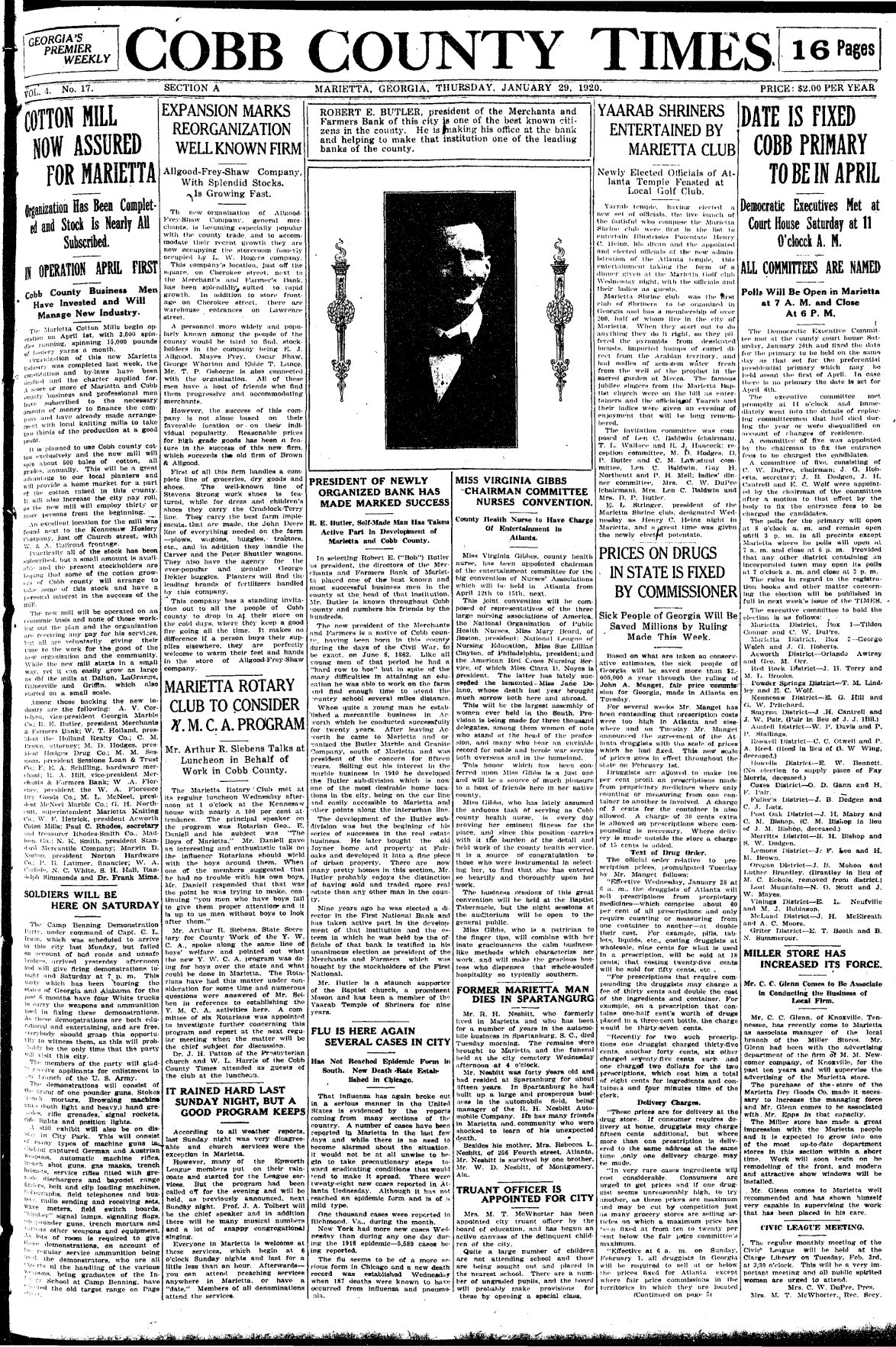 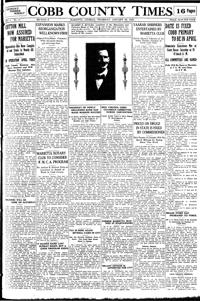 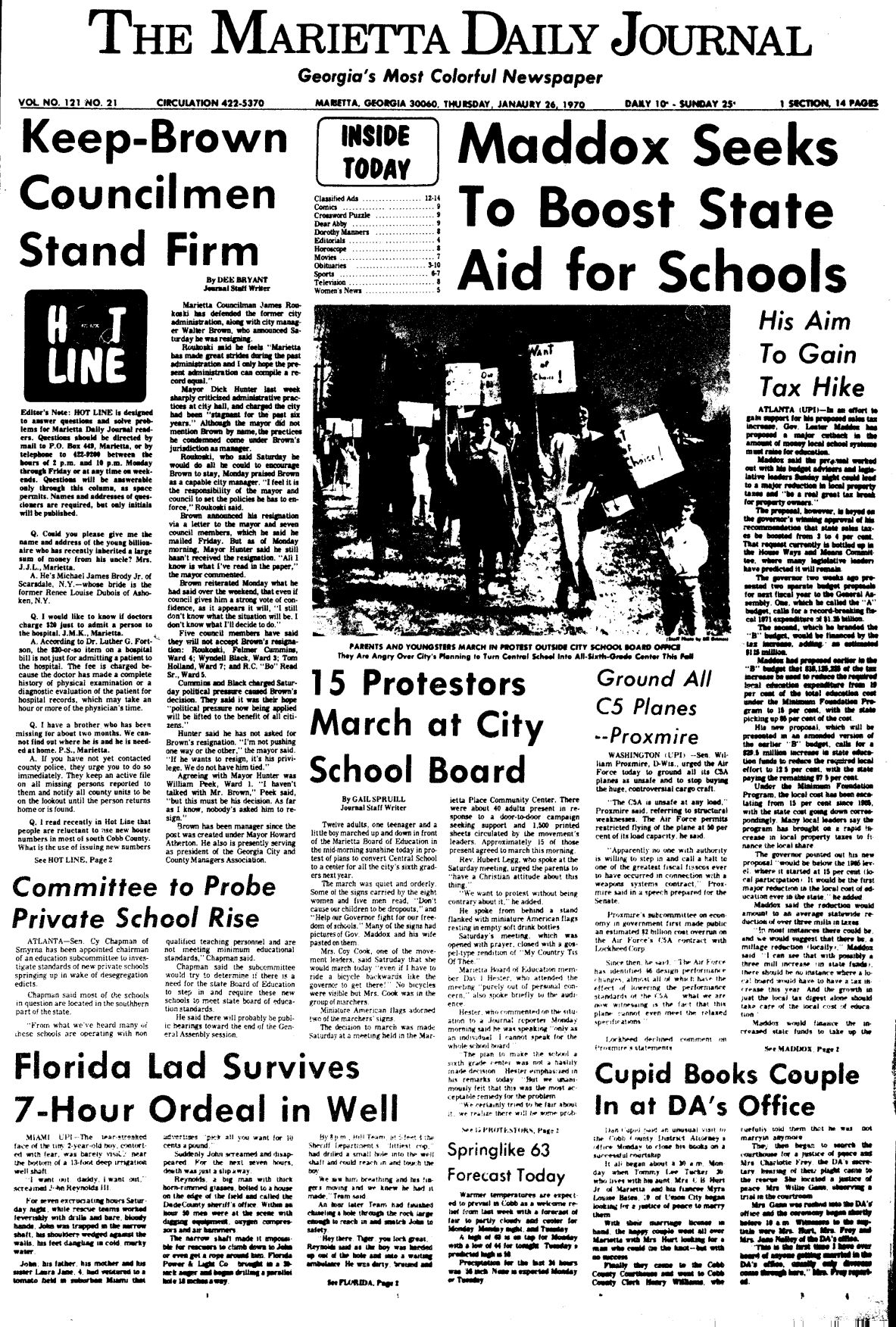 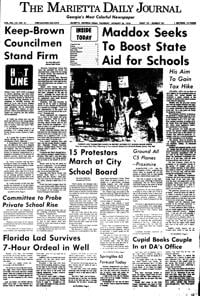 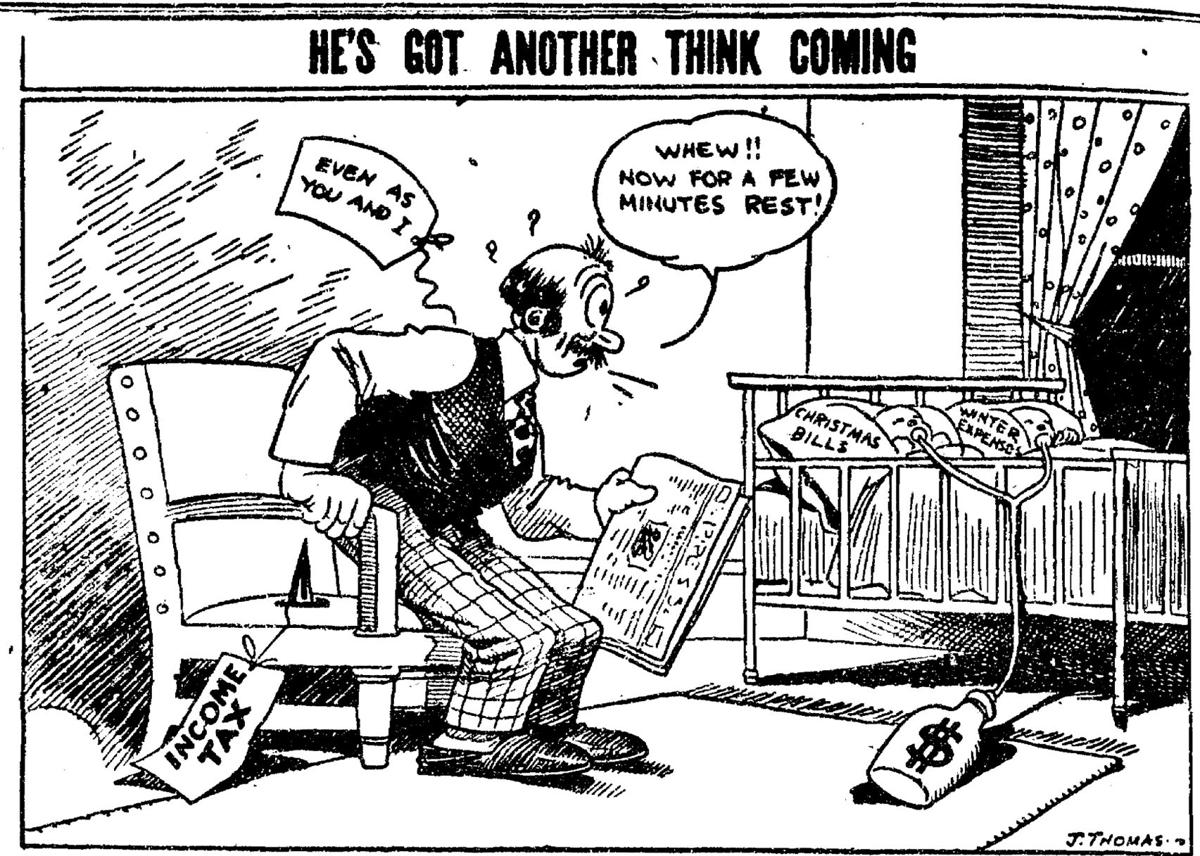 From the Thursday, Jan. 29, 1920, edition of The Cobb County Times. Pictured is an editorial cartoon, titled “He’s Got Another Think Coming.”

From the Thursday, Jan. 29, 1920, edition of The Cobb County Times. Pictured is an editorial cartoon, titled “He’s Got Another Think Coming.”

The Thursday, Jan. 29, 1920, edition of The Cobb County Times reported that the Marietta Cotton Mills would begin operation on April 1, 1920 with 3,000 spindles running and spinning 15,000 pounds of embroidery yarns a month.

Organization of this new Marietta business was completed the week before. The mill was to exclusively use Cobb County cotton and spin about 500 bales of cotton in all grades each year.

H.J. Solesby, a Confederate veteran, was reported as having died at the Soldier's Home the Wednesday before. His body was brought to Marietta by Black's Undertaking Company the Thursday before and both the chapel and the casket were adorned with Confederate flags. The service was conducted by Rev. W.P. Hamby. Other soldiers from the Home served as pallbearers.

The author wrote: "It was a pathetic scene to see these old gray-haired heroes lift the casket of this departed comrade. These grand old men of the sixties will soon be all gone. Let us give them all the honor they so rightly deserve."

In the “News From Our Correspondents” column was the following item:

♦ Mount Olivet section — Alice Mae Harrison was reported as having had a bad accident at school, causing her to fall and break her arm just below the elbow.

On the Editorial Page, the Times editors wrote the following item:

"Remember Jan. 16, 1919. It was the day the United States went 'dry' and the date of the first meeting of the League of Nations. Both are experiments. Both have opposition as well as millions of supporters. All things are that way."

The Friday, Jan. 30, 1920, edition of The Marietta Journal reported that the Camp Benning Demonstration Party which had been scheduled to arrive in Marietta at the beginning of the week did not arrive until the day before because of bad roads and unsafe bridges.

The party, which had been touring Georgia and Alabama for six months, was composed of three officers and 14 enlisted men under the command of Capt. C.L. Irwin. Each of them, graduates of the Infantry School at Camp Benning, were experts in various weapons.

The demonstrations were to be given that weekend at "the old target range on Page Street" and would consist of "one pounder guns, Stokes trench mortars, Browning machineguns, light and heavy grenades, signal rockets, rifle lights and position lights."

In the “Current Events” column on the front page was the following item:

♦ The Georgia Railway and Power Company, operating Atlanta's street cars, carried nearly 100 million passengers during 1919 — an increase of about 10% over the previous year.

With Prohibition now in effect, the Journal editors wrote the following item on the Editorial Page:

♦ "In Canada the measure for liquids is the English 'beer measure,' while our own liquid measure is known as the 'wine measure,' which is slightly different. It has been suggested with good force, that now is the time to get away from both these and adopt the metric system of weights and measures, which is already used by all the rest of the world."

In the Thursday, Jan. 26, 1970, Marietta Daily Journal it was reported that 12 adults, one teenager and a little boy marched up and down in front of the Marietta Board of Education in the mid-morning sunshine in protest to plans to convert the Central School to a center for all the city's sixth graders in 1971.

The quiet and orderly march featured signs that read - "Don't cause our children to be dropouts" and "Help our Governor fight for our freedom of schools." Many of the signs had pictures of Gov. Lester Maddox and his wife pasted on them.

Cobb County detectives were reported in the Friday, Jan. 30, 1970, paper as having made several arrests which cleared up an armed robbery, the vandalism and burglary of Campbell High School and the vandalism at Smyrna Presbyterian Church.